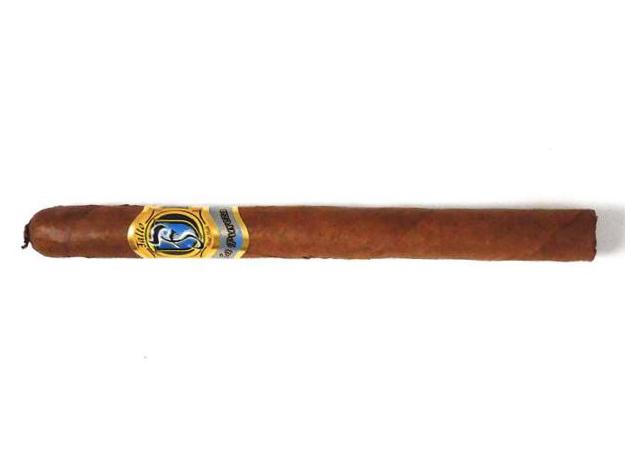 2020 would mark the 25th anniversary of Luis Falto in the cigar business. “Small batch production” is popular now in the cigar industry, but Tabacalera Falto has been doing it for 25 years. Falto planned a couple of cigars to commemorate the occasion: the Falto La Pureza and Falto Edición Especial ELH Hato Viejo 2018. While the ELH is still to be released, the La Pureza is a cigar that has made it to market. The Falto La Pureza is a lancero-sized offering and it’s the cigar we will look at today. 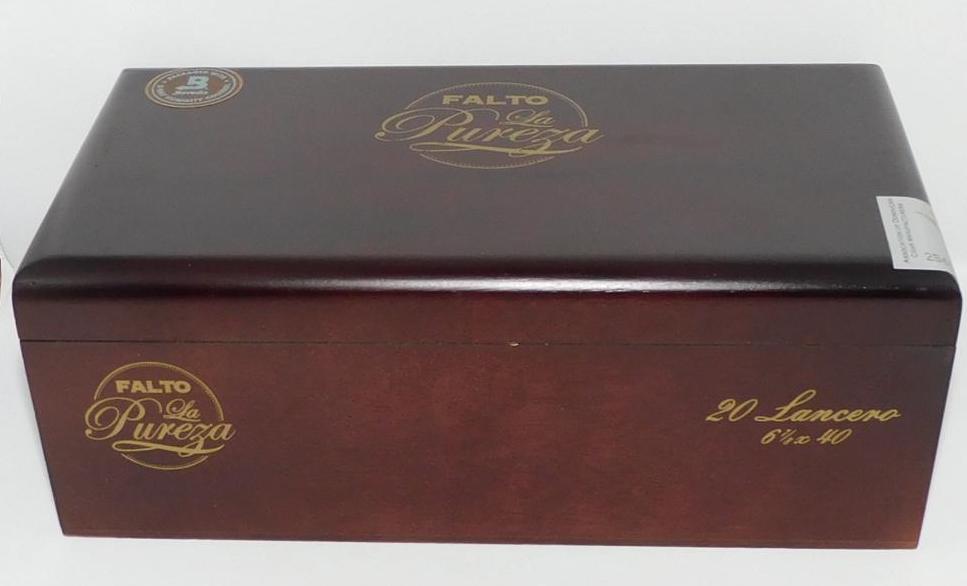 Falto Cigars is based in Mayagüez, Puerto Rico – a place not too common for a premium cigar company to be headquartered in. Back in 1995, as a college student at George Washington University, Luis Falto started selling cigars. He eventually decided he wanted to make his own cigars that reflected his personal profile. This took Falto to the Dominican Republic where he met up with Manuel Inoa of the La Aurora factory. Falto’s vision was to develop small batch cigars with tobaccos he could personally choose and toreadors he could get to know on a personal basis. Inoa and La Aurora connected on this vision and thus the Tabacalera Falto company was born.

In terms of small batch releases, Falto Cigars embraces a “one size, one blend” model. It’s not necessarily a unique concept, but I can’t think of another premium cigar company that has built its entire portfolio on this concept. It’s a philosophy that Luis Falto has subscribed to from the inception of getting into the cigar business. As mentioned the Falto La Puerza is a lancero size – and it has its own unique blend.

Without further ado, let’s break down the Falto La Pureza and see what this cigar brings to the table.

The Falto La Pureza is a Dominican-forward blend highlighted by an HVA (Havana Vuelta Abajo) wrapper from Ecuador.

The Falto La Pureza’s single size falls in the lancero range and measures 6 7/8 x 40. The cigars are packaged in 20-count boxes. 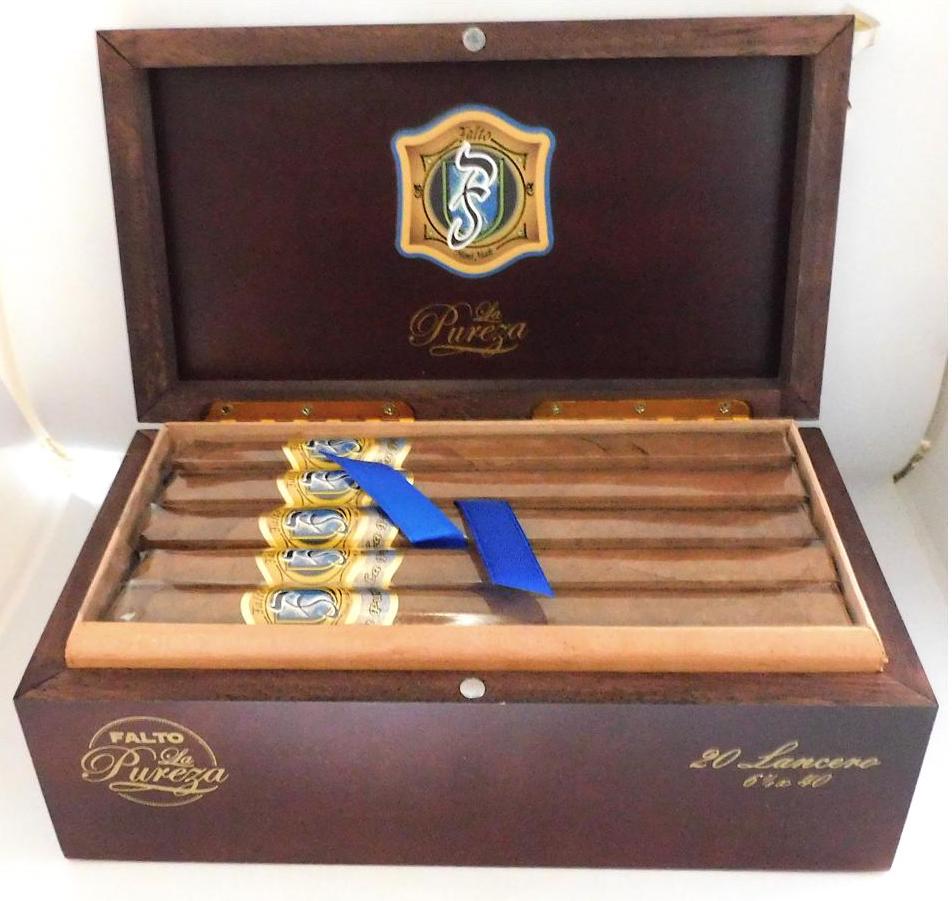 The HVA wrapper of Falto La Pureza has a strong rosado color to it. There was a light coating of oil on the surface of this wrapper. The wrapper itself had some visible veins and there were also some visible wrapper seams. The cap of the wrapper is finished with a very short pig-tail.

The band of the Falto La Purerza features a blue and yellow color scheme with gold trim.  The center of the band features a dark blue Falto “F” with white accents.  The “F” sits on a shield on a blue and gold  “spray paint” style background.  The shield is surrounded by a yellow frame with dark blue accents..  Above the logo is the text “Falto” in dark font.  Below the logo is the text “Hand Made” in small dark font.  The remainder of the band contains blue, gold, and yellow adornments. Gold trim separates the upper and lower portions of the band.  The lower part of the band also has a blue and gold spray paint style background.  The text “La Pureza” is in gold font with dark trim.

As opposed to pulling the small pig-tail off the Falto La Pureza, a straight cut was used to remove the cap and the pig-tail at the same time. Once the cap was removed it was on to the pre-light draw stage. The cold draw delivered a mix of earth, cedar, and savory notes as well as a touch of floral notes. Overall this was a satisfactory pre-light draw. At this point, it was time to light up the Falto La Pureza and see what the smoking experience would have in store.

During the second third of the La Pureza, the earthy notes still held a slight edge over the other notes. Meanwhile, the orange notes began a transition to natural tobacco notes. There was a slow, steady increase in the pepper notes. Some woody notes began to emerge as well. The savory notes began to dissipate.

By the last third, the earth notes remained grounded in the forefront. The pepper notes were now the closest of the secondary notes. Rounding out the flavor profile were the natural tobacco, cedar, and classic wood notes. This is the way the cigar experience of the Falto La Pureza came to a close. The resulting nub was slightly soft to the touch and cool in temperature.

The Falto La Pureza scored very nice when it came to its burn. This was a cigar that maintained a straight burn path and a straight burn line with little in the way of touch-ups. The cigar itself had a silvery gray ash. This was an ash that was tight and came off the cigar in clean chunks. The burn rate and burn temperature were both ideal. 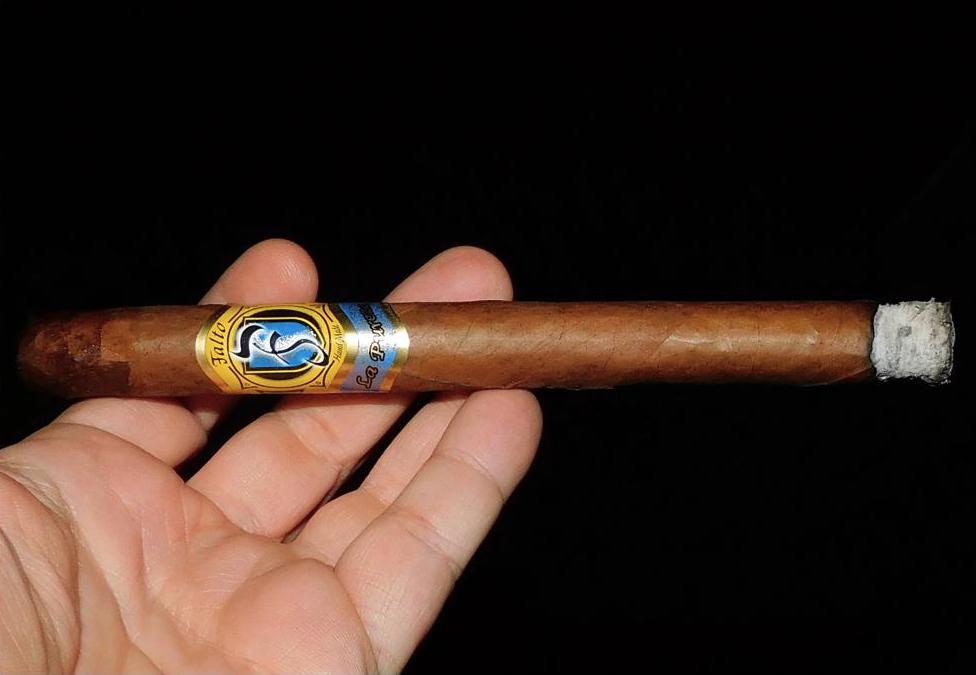 Burn of the Falto La Pureza

The draw of the Falto La Pureza was slightly more open than I prefer. Normally I like to work a draw a little more and prefer a touch of resistance on it. At the same time, this was not a loose draw and didn’t significantly impact the overall smoking experience.

The Falto La Pureza started out as a medium strength, medium-bodied cigar. Both the strength and body increased during the cigar experience. The strength didn’t increase enough to move into medium to full territory, but by the second half, the body did move to the medium to full range.

In terms of strength versus body, both attributes were relatively even in the first half. By the second half of the smoking experience, the body had an edge.

The Falto model of one blend, one size has always been one that has interested me. It seems with every release by Luis Falto, he nails it in terms of coming up with an ideal size for his blend. The Falto La Pureza is no exception. While there isn’t necessarily a revolutionary new flavor that will come to the cigar, I found the combinations and permutations of the flavors to be unique. In the end, this is a cigar that delivered, and with a 90, it scores high enough to earn the Cigar Coop Standard of Excellence. It’s certainly a cigar that I would recommend to any cigar enthusiast. In particular, if you are a lancero fan, this is one you should pick up. Even if you aren’t ordinarily a lancero fan, this one is worth smoking as well. As for myself, this is a lancero I would definitely smoke again – and pick up multiples to smoke in the humidor.