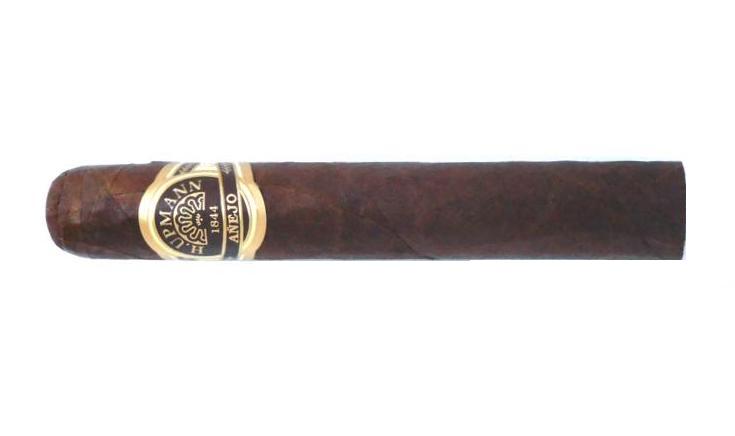 Without further ado, let’s break down the H. Upmann 1844 Añejo Magnum and see what this cigar brings to the table.

The H. Upmann 1844 Añejo is not a more aged version of the original H. Upmann 1844 Reserve line, but a different blend. The H. Upmann 1844 Añejo consists of an Ecuadorian Habano wrapper, Pennsylvania Broadleaf binder, and tobaccos from the three major (non Cuban) tobacco producing countries of Nicaragua, Honduras, and the Dominican Republic. The cigar was blended by Ernesto Kranwinkel from Tabacalera USA in conjunction with the Grupo de Maestros at the Flor de Copan factory in Honduras.

The H. Upmann 1844 Añejo is available in three sizes. Each is presented in 25-count boxes.

The Ecuadorian Habano wrapper of the H. Upmann 1844 Añejo Magnum had a medium to dark color with a slight rosado tint. There was some subtle mottling on the surface, but there wasn’t much in the way of oil on the surface. The wrapper also had a slightly bumpy surface. There were some visible veins, and some very thin visible wrapper seams.

The H. Upmann 1844 Añejo features a packaging design consistent with packaging changes made to the 1844 Reserve and the popular 1844 Vintage Cameroon lines. The band of the H. Upmann 1844 Añejo has a brown, gold, and pale yellow color scheme. The center of the band has a circular field with gold and yellow trim. The center of the band has the signature sunburst logo of the H. Upmann brand in gold font. Above the sunburst is the text “H. UPMANN” – also in gold arranged in a curved fashion. There is a brown ribbon design with gold trim and adornments draped on the lower part of the center. On the center of that band is the text “AÑEJO” in gold font. The left and right side of the band have the text “1844” in gold font on a yellow nameplate background with gold trim.

A straight cut was used to remove the cap and commence the cigar experience of the H. Upmann 1844 Añejo Magnum. Once the cap was removed, it was on to the pre-light draw experience. The cold draw delivered notes of grapefruit and earth. This wasn’t the most exciting pre-light draw, but since the pre-light draw is not factored into the score and assessment rating, there was no loss of points here. At this point it was time to light up the H. Upmann 1844 Añejo Magnum and see what the cigar experience would have in store.

The H. Upmann 1844 Añejo Magnum started out with a mix of cocoa, red pepper, earth, and grapefruit-citrus notes. Early on the cocoa notes notes moved into the forefront. The grapefruit, earth, and red pepper notes settled into the background. At the same time there was an additional layer of red pepper on the retro-hale.

The cocoa notes started to recede and were displaced by the grapefruit-citrus notes in the second third. The citrus wasn’t overwhelming because it was balanced by the cocoa, red pepper, and earth notes. Once past the midway point, there was an increase in the earthy notes. Later in the second third, there was a slight increase in the red pepper notes.

By the last third, the earth notes displaced the grapefruit-citrus as the primary note. The red pepper and grapefruit-citrus were the most prominent of the secondary notes. There were still touches of cocoa at the end. This is the way the H. Upmann 1844 Añejo Magnum came to a close. The resulting nub was cool in temperature and soft to the touch.

There was some jaggedness on the burn line of the H. Upmann 1844 Añejo Magnum. At times the burn had a slight bit of meandering. This was remedied by some touch-ups along the way. While the touch-ups did the trick, these were more frequent than I prefer. The resulting ash wasn’t overly firm, but it wasn’t loose nor flaky either. This was an ash that was medium-gray in color. The burn rate and burn temperature were ideal. 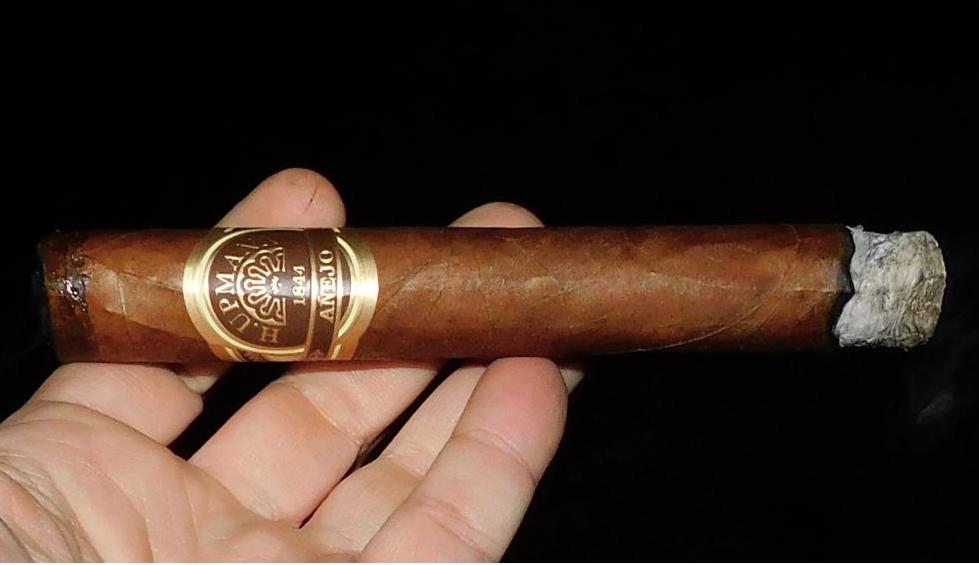 The draw to the H. Upmann 1844 Añejo Magnum had a touch of resistance to it. This is something that I prefer on a cigar. While a little work had to be put in to derive the flavors, by no means was this a snug draw.

Given there was some age on the tobaccos, I was expecting something more dialed back from the H. Upmann 1844 Añejo Magnum. That is exactly what the H. Upmann 1844 Añejo Magnum delivered. This was a cigar that started mild to medium in strength and progressed to medium-bodied in the second half. As for the flavors, they were on the lower end of medium-bodied.

Overall, I found the H. Upmann 1844 Añejo Magnum delivered a cigar experience I enjoyed from a flavor perspective. I also enjoyed the flavor profile delivered in the 6 x 60 format. This also wasn’t the most complex of cigars, and that took the score down a a bit – contributing to the 87 points awarded. In terms of this cigar, at $8.00 there was a lot of cigar to be enjoyed here – and the price was right. One thing I’ll note is that the cigar’s mild to medium profile might not be enough to satisfy many large ring gauge cigar enthusiasts.

In the end, there was still enough cigar here to recommend this to anyone who enjoys big ring gauge. As for myself I can see myself buying one of these again – and smoking from time to time.