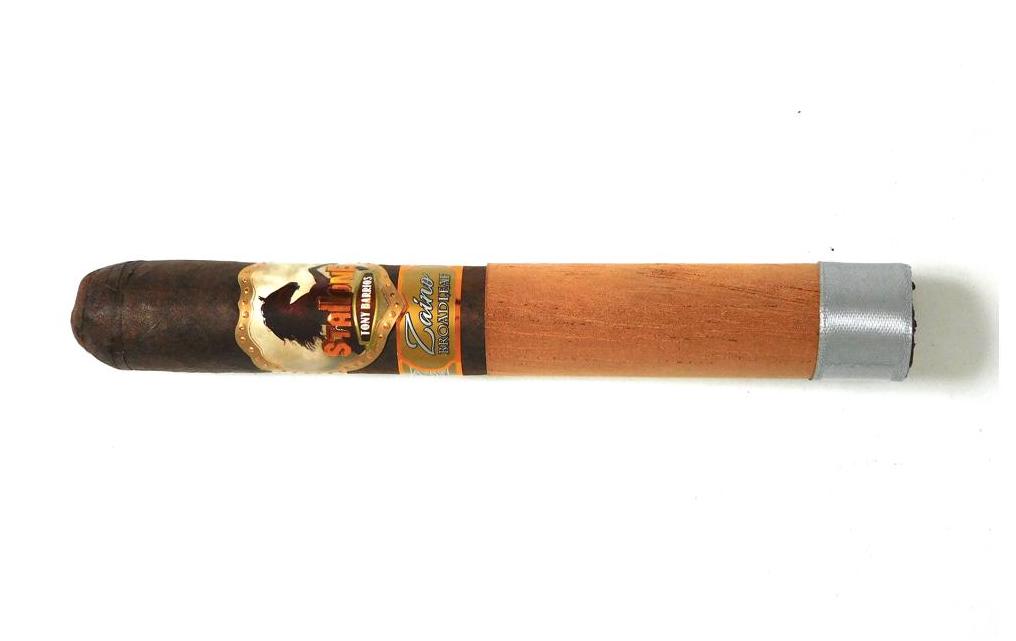 Stallone Cigars is a company owned by Tony Barrios. Barrios hails from Venezuela from a family which has a background in tobacco. In 2014, he launched Stallone Cigars. The name Stallone is Italian for stallion and it reflects on the theme of the company. It also reflects Barrios’ love of horses, as in his spare time Barrios is a cutting horse competitor. Originally Stallone Cigars was released to the international market, but in 2020 Barrios turned his attention to the U.S. market. His U.S launch would launch six blends under the umbrella called the “Cowboy Series.” Today, we take a closer look at one of those releases – the Stallone Zaino Broadleaf in the Toro size.

Without further ado, let’s break down the Stallone Zaino Broadleaf Toro and see what this cigar brings to the table.

The Stallone Zaino Broadleaf is offered in two sizes – each is presented in 20-count boxes.

The Broadleaf wrapper of the Stallone Zaino Broadleaf Toro had a dark roasted espresso color. The surface of the wrapper had a very light coating of oil on it. Upon closer examination some mottling could be seen on the surface. There were some visible veins while the dark color of the wrapper did a good job at hiding the seams. 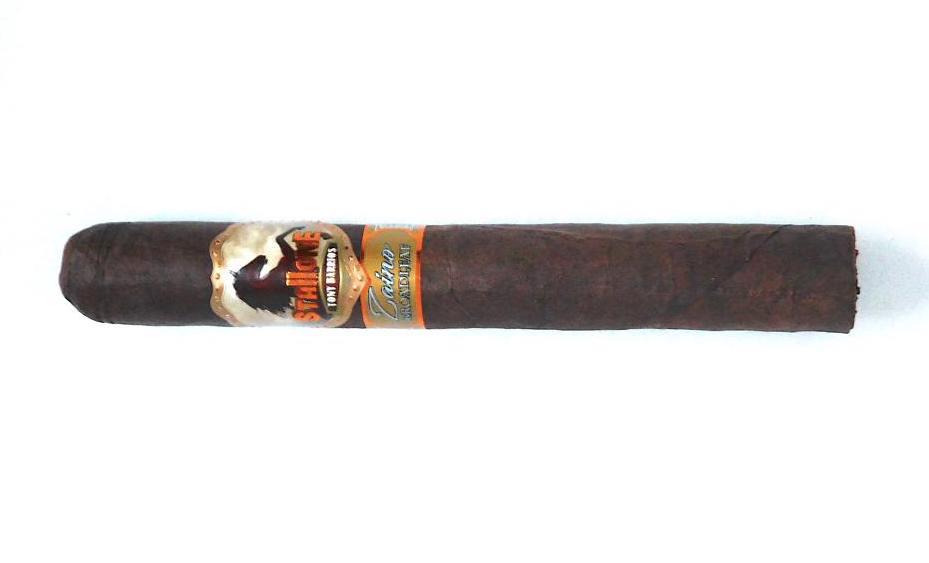 The secondary band has a pewter background with copper trim. The center of the band has a light copper nameplate featuring the gray-font text “Zaino BROADLEAF” (with the “Zaino” text in cursive). The left and right sides of the band are decorated with gray leaves.

The bottom half of the cigar is covered with a cedar sleeve. There is a gray-colored ribbon over the cedar sleeve by the footer area.

After removing the cedar sleeve from the Stallone Zaino Broadleaf Toro, a straight cut was used to remove the cap of the cigar. Once the cap was clipped, it was on to the pre-light draw ritual. The cold draw delivered a a mix of coffee, earth, and a slight cedar note. This was a satisfactory pre-light draw experience. At this point it was time to toast up the footer of the Stallone Zaino Broadleaf Toro and see what the smoking phase would have in store.

The Stallone Zaino Broadleaf Toro kicked off with notes of earth, mocha, white pepper, and bing cherry. Mocha is a term I use to describe a fusion between coffee and chocolate favors. The mocha notes took a slight edge as the primary notes early on. As the Zaino Broadleaf Toro progressed through the first third, the mocha notes exhibited more in the way of black coffee notes. Meanwhile the earth, pepper, and cherry notes settled in the background. There also was an additional layer of white pepper on the retro-hale.

By the last third, the mocha component was now exclusively a black coffee flavor. The bing cherry notes receded into the background with the earth, white pepper, and cedar. By this point there was an increase in the white pepper notes, but they did not take over the flavor profile. This is the way the Stallone Zaino Broadleaf Toro came to a close. The resulting nub was soft to the touch and cool in temperature.

The Stallone Zaino Broadleaf Toro required some touch-ups along the way in order to maintain a straight burn line and straight burn path. There were slightly above average amount of touch-ups needed, but the touch-ups did the trick.  While the resting ash was mostly firm, the Zaino Broadleaf Toro did have some minor flaking. The ash itself had a silver-gray color. As for the burn rate and burn temperature, both were in the ideal range. 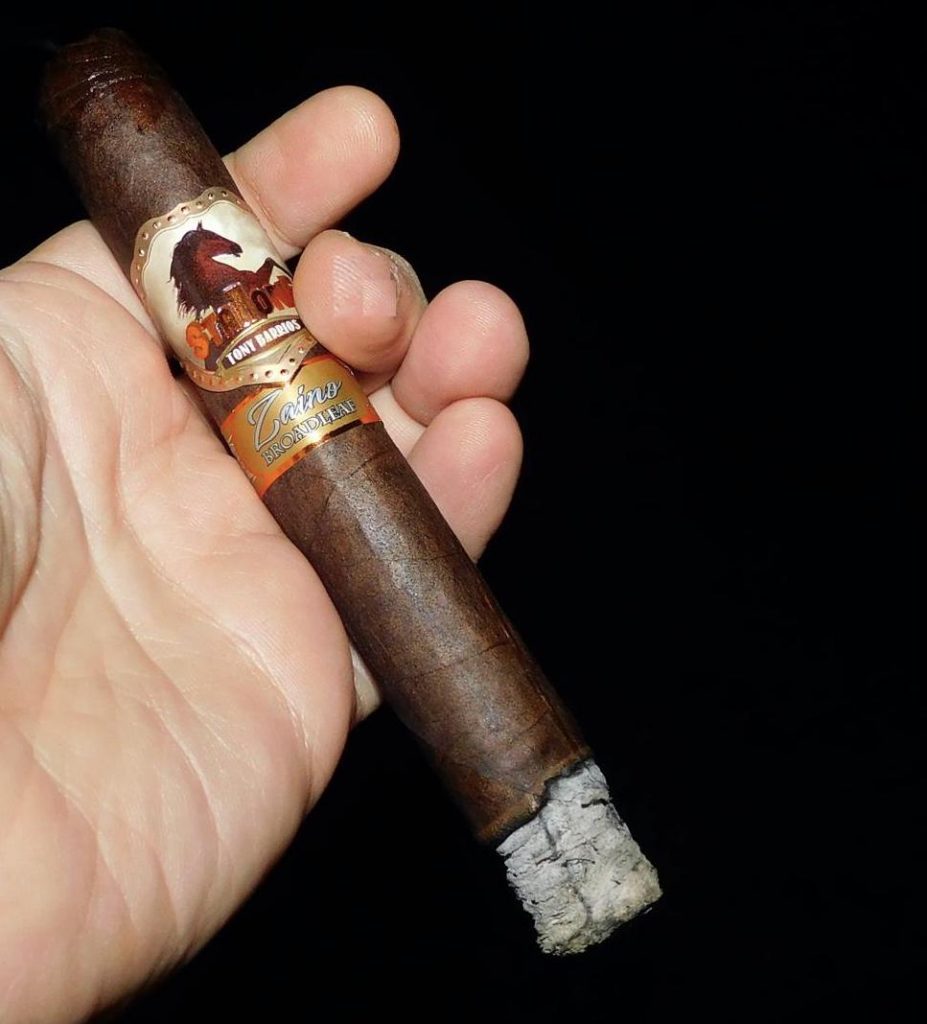 In terms of strength and body, the Stallone Zaino Broadleaf Toro started off medium. For the most part the strength level remained constant. By the start of the second third, the body notched up to medium to full territory – where it remained for the duration of the smoking experience. When comparing the strength and body levels, the body started out with a slight edge – and that edge grew as the cigar experience progressed.

Overall my impression of the Stallone Cigars Cowboy Series has been that this line delivers an excellent cigar experience at a fair price. The Stallone Zaino Broadleaf Toro falls into that category. While it doesn’t have a radically unique profile for a Broadleaf cigar, it still has a very good one. This cigar saw a nice harmony in the flavors as well. This is a Broadleaf cigar that I would recommend to any cigar enthusiast. As for myself, this is a cigar I would not only smoke again, but also buy multiples of to keep in my humidor. At 90 points, the Stallone Zaino Broadleaf Toro reaches the threshold for Cigar Coop Standard of Excellence.