Agile Cigar Reviews are cigar assessments where we use a lightweight, shorter format. These will never take the place of our comprehensive reviews. They are only used on blends we have previously assessed. This might be a blend we are rescoring or giving a score for the first time. It might be a blend we are looking at in a different size. Today we look at the Southern Draw Cedrus in the Lancero size. The Southern Draw Cedrus is a cigar line we previously assessed in the The Hogan (Belicoso) size back in November 2018. 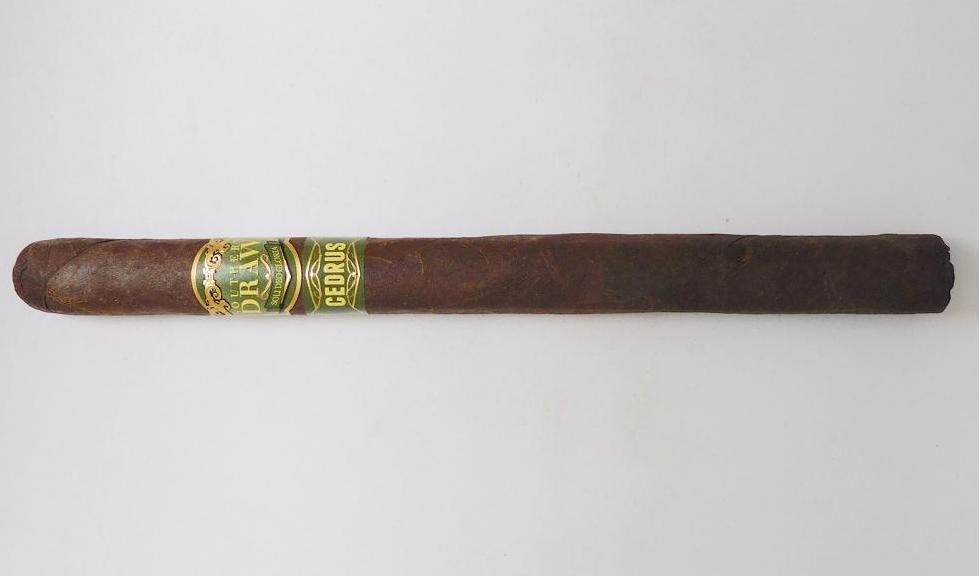 In 2018, Southern Draw Cigar added a new core line offering with the Cedrus. While the previous four core blends paid homage to different flowers, Cedrus pays homage to Lebanese Cedar trees. Lebanese Cedar trees (Cedrus libani) were highly sought after for ancient woodworking. Cedar is currently the most utilized wood in the premium cigar industry and the image of the Cedrus tree serves as a biblical inspiration behind Cedrus’ brand art. The initial release was a box-pressed torpedo known as “The Hogan” that paid homage to Phil and Shelly Hogan, who were listed as co-owners of the company and instrumental in supporting the company’s efforts. Since then the line has expanded to five vitolas with the 7 1/2 x 40 Lancero being added in 2020. Today we did deeper into the Cedrus Lancero.

As mentioned above, the Cedrus represented several firsts for Southern Draw. The Indonesian-grown wrapper is something Southern Draw has not done before. As with all Southern Draw Cigars, Cedrus is produced at AJ Fernandez’s Tabacalera Fernandez. At the same time, Indonesian wrapper is not something the Fernandez factory is well-known for. The remainder of the blend consists of a Nicaraguan Habano 2000 binder as well as fillers consisting of Nicaraguan tobaccos and Dominican Piloto Cubano. The lanceros are presented in 20-count boxes. Like the rest of the Cedrus line, the Cedrus Lancero is box-pressed and features a covered footer.

Flavor-wise, the Cedrus Lancero starts off with notes of chocolate, citrus, mineral, cedar, and red pepper. As the cigar experienced progressed, the mineral notes became more prominent. By the second third, the mineral notes, which were now joined by earth notes displaced the chocolate notes into the background. Later in the second third, the red pepper emerged. By the final third the red pepper joined the mineral and earth as primary notes. The chocolate, cedar, and citrus notes rounded out the flavor profile.

The Cedrus Lancero started out as a medium strength, medium-bodied cigar. There was a gradual, linear increase of the intensity levels of both attributes right until the end of the smoking experience. By the final third, both attributes progressed to the medium to full range. Both the burn and draw were flawless, performing at excellent levels.

When I smoked the Cedrus Hogan back in 2018, it was a cigar that I really enjoyed. It seemed to me the box-pressed Belicoso worked well. At the same time, I’m not sure the flavor profile is for everyone. The Lancero was a different story. I just don’t think this blend worked well in a box-pressed 7 1/2 x 40 format. There was too much mineralogy, earth, and spice in the second half of this cigar – and ultimately it didn’t meet the expectations. This is a cigar that I would recommend trying a sample of first, but in my opinion I would go back the Hogan size.