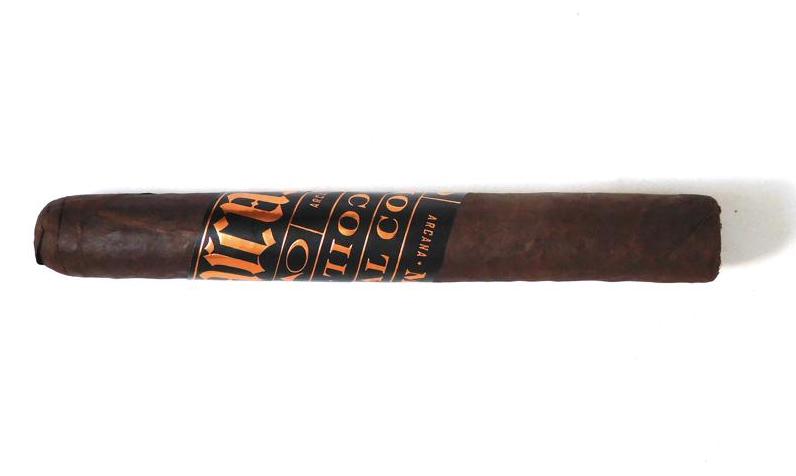 At the start of 2021, General Cigar Company announced the launch of a new limited edition series under its CAO brand known as Arcana. The Arcana series is described as one that features unique tobacco forms and techniques from various regions around the world. The first cigar of this series is called the Mortal Coil. This is a cigar that incorporates andullo tobacco into the blend. Andullo is special in the fact it is cured very differently than the air-cured process used for many tobaccos used in premium hand-made cigars. Over the past few years, we have seen some companies utilize andullo from time to time, but this is the first one from General that I can recall. Today we take a closer look at the CAO Arcana Mortal Coil and assess how well this blend performed.

The curing process of andullo involves putting tobacco leaves in palm seed pods known as yagua. The pods are then wrapped in rope, causing the andullo tobacco to compress into a thick bar almost looking like a roll of salami. This is not a new process, but one that has been used for many years. At the same time, this is not something commonly found on premium cigars. This tobacco is ordinarily used for snuff, chewing tobacco, or pipes. The curing process was the inspiration for the name Mortal Coil.

While I believe this is the first andullo release from General, the concept of using unorthodox tobaccos and tobacco curing methods is not new to General. The CAO Amazon Basin series was known for utilizing rare Brazilian tobaccos. Two of the Amazon Basin releases, CAO Fuma Em Corda and CAO Amazon Anaconda, used a tobacco General called Brazilian Fuma Em Corda. Fuma En Corda means “tobacco on a rope” and in the case of the Fuma Em Corda tobacco, that is exactly how the tobacco was cured and fermented.

Without further ado, let’s turn our attention back to the CAO Arcana Mortal Coil and see what his cigar brings to the table.

The blend for the CAO Arcana Mortal Coil consists of a Connecticut Broadleaf wrapper over a Connecticut Shade binder and filler tobaccos from the Jamastran Valley of Honduras and Estelí, Nicaragua. The blend also incorporates Dominican Piloto Cubano tobacco that utilizes the Andullo technique.

The Connecticut Broadleaf wrapper of the CAO Arcana Mortal Coil had a milk chocolate brown color to it. Upon closer examination, there was some mottling present on the surface. There also was a light sheen of oil on the surface. Due to the darker color of the wrapper, the wrapper seams were not very noticeable. At the same time, there were some veins visible on the surface of the wrapper.

The band is applied to the cigar like a barber-pole (and thus must be removed the same way). The band itself is black with copper font. On the band is the text “CAO” (in the brand’s logo font), “ARCANA” (in a gothic font), and “ARCANA MORTAL COIL SERIES” (in more mainstream fonts). 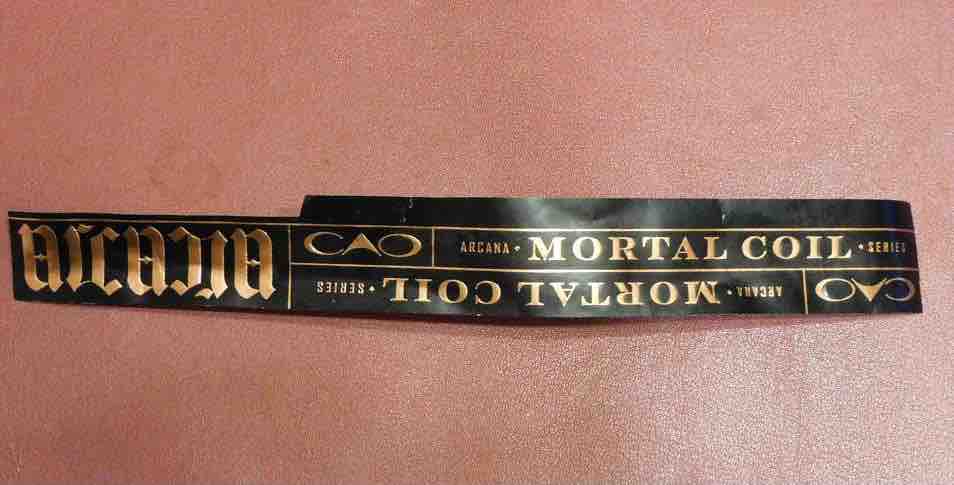 Band of the to CAO Arcana Moral Coil

A straight cut to remove the cap was used to commence the cigar experience of the CAO Arcana Mortal Coil. Once the cap was removed, it was immediately on to the pre-light draw. The cold draw delivered a mix of chocolate, leather, slightly soured cherry, and floral notes. Despite the floral notes, I still found this cigar to have an excellent pre-light draw. At this point, it was time to toast the foot of the CAO Arcana Mortal Coil and begin the smoking phase.

The CAO Arcana Mortal Coil opened up with notes of chocolate, damp earth, cedar, and a combination of white and black pepper. Early on, the chocolate and damp earth moved into the forefront. The cedar and pepper notes settled into the background where they were joined by some of the unsweetened cherry notes. On the retro-hale there was a combination of black pepper along with a musty component.

The final third of the saw the pepper notes join the damp earth notes in the forefront. There were still touches of unsweetened cherry, chocolate, and cedar notes present in the background with imparted enough sweetness to round off the flavor profile. This is the way the experience of the CAO Arcana Mortal Coil closed. The resulting nub was soft to the touch and cool in temperature.

The CAO Arcana Mortal Coil was a well-constructed cigar and this reflected nicely on the score of the burn. While there was a little bit of jaggedness on the burn line, the burn had no difficulty staying on a straight path and required minimal touch-ups. The resulting ash was tight and firm with a near-white color to it. The burn rate and burn temperature were both ideal. 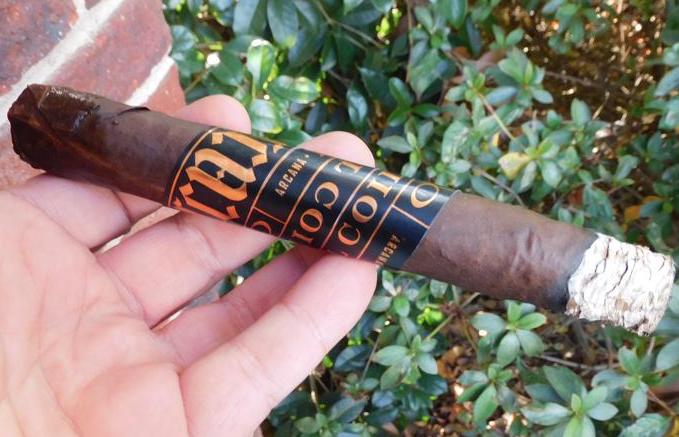 The draw to the CAO Arcana Mortal Coil had a touch of resistance to it – making this an ideal draw in this author’s book. This was also a cigar that produced abundant layers of smoke.

This was also a cigar that exhibited boldness. It started out medium to full in both strength and body – and stayed in that range until the end of the smoking experience. There wasn’t much in the way of variance of the intensity of the strength and body. At the same time, both attributes balanced each other nicely.

I will admit – I’ve had some mixed results with andullo tobacco in cigars. In some cases, I’ve enjoyed it and in some cases, I have not. At the same time, there have been some cigars that have been inconsistent in the way they have performed with the andullo tobacco. The CAO Arcana Mortal Coil was a cigar that I enjoyed. It’s not a cigar for everybody. I found the damp earth gave the cigar a dankness and it was balanced by spice and sweetness to create a nice smoking experience. I’d still say this is a cigar for the experienced cigar smoker. It’s one that I would certainly buy and smoke again. Coming in at 90 points, the CAO Arcana Mortal Coil earns the Cigar Coop Standard of Excellence designation.