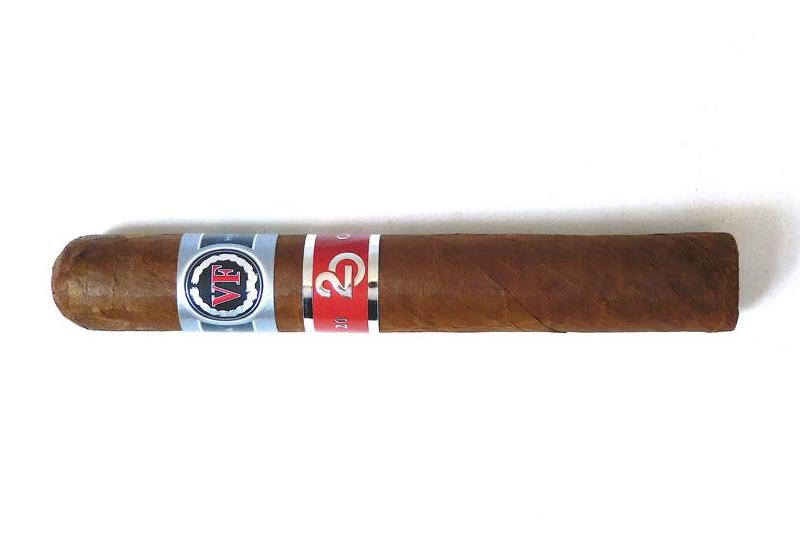 Without further ado, let’s break down the VegaFina Fortaleza 2 Capa 20 and see what this cigar brings to the table.

In addition to the aged Mexican Habano wrapper, the remainder of the blend of the VegaFina Fortaleza 2 Capa 20 consists of a binder from the United States, and a combination of Dominican, Nicaraguan, and Peruvian tobaccos. Production is handled at Tabacalera de Garcia in the Dominican Republic. 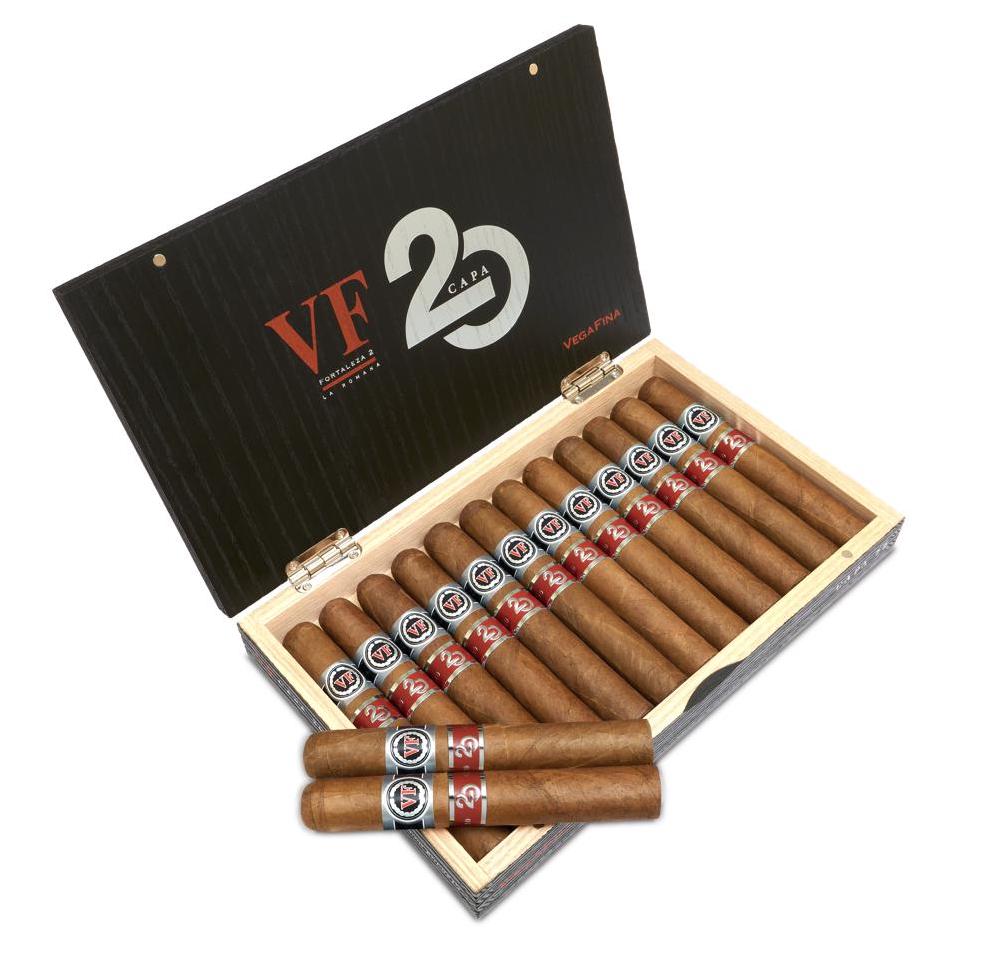 The Mexican Habano wrapper of the VegaFina Fortaleza 2 Capa 20 had medium brown color to it. There wasn’t much in the way of oil on the surface, but the wrapper itself had a very silky complexion to it. There were some visible seams as well as some thin visible veins.

There are two bands on the VegaFina Fortaleza 2 Capa 20. The primary band is the same as found on the regular VegaFina Fortaleza 2 line. It features a gray, black, red, silver, and white color scheme.  On the center of the band is a VegaFina logo.  This features “VF” in red font with a white trim to it.  The “VF” sits on a black circular background.  A silver wreath surrounds the “VF”.  There is also white and gray striping toward the outer part of the circle.  The rest of the band features a thick black stripe with a thinner gray stripe above and below it.  The black stripe features smaller “VF”s outlined in gray in wallpaper fashion.  On the left side of the band is the text “VEGAFINA” in gray font.  On the right side of the band is the text “HECHO A MANO” in gray font.

The secondary band was found lower on the cigar. This is a rust-colored band with a chrome trim on the top and bottom. On the center of the band is a chrome “20” logo surround by the text “CAPA 20” on each side (also in chrome).

Prior to lighting up the VegaFina Fortaleza 2 Capa 20, a straight cut was used to remove the cap. Once the cap was removed, it was on to the pre-light draw experience. The cold draw delivered a mix of cedar, natural tobacco, and a slight citrus component. Overall this wasn’t the most exciting pre-light experience, but since we do not score the pre-light experience, there was no loss of points here. At this point, it was time to toast up the footer of the VegaFina Fortaleza 2 Capa 20 and see what the smoking phase would have in store.

The VegaFina Fortaleza 2 Capa 20 opened up with notes of citrus, bread, cocoa, white pepper, and a nice cinnamon note. As the cigar burned through the initial phases, a natural tobacco note soon surfaced. The natural tobacco and bread notes eventually gained control as the primary notes. The citrus, cocoa, pepper, and cinnamon notes moved into the background. The cocoa notes evaporated and the citrus became the most prominent secondary note. Meanwhile, the retro-hale delivered an additional layer of citrus and pepper.

During the second third of the VegaFina Fortaleza 2 Capa 20, the natural tobacco and bread remained in the forefront. The natural tobacco developed a slight bitterness. Meanwhile, the citrus remained the most prominent secondary note. There were still notes of pepper and cinnamon, but the cinnamon notes were definitely diminishing.

By the last third, the citrus notes joined the natural tobacco and bread notes in the forefront. There were some bitter qualities to the natural tobacco. There was a slight white pepper increase and hints of cinnamon remained. By the time the cigar came to a close, the flavors were quite muddled, and to quote my old partner Stogie Santa, “the cigar didn’t seem like it knew what to do.” The resulting nub was still on the cool side and soft to the touch.

The VegaFina Fortaleza 2 Capa 20 did require some touch-ups along the way to maintain a straight burn path and straight burn line. The touch-ups did the trick, but the amount needed was slightly above what I consider the norm. The resulting ash wasn’t overly firm, but not loose or flaky either. This was an ash that had many shades of gray color. As for the burn rate and burn temperature – both were ideal. 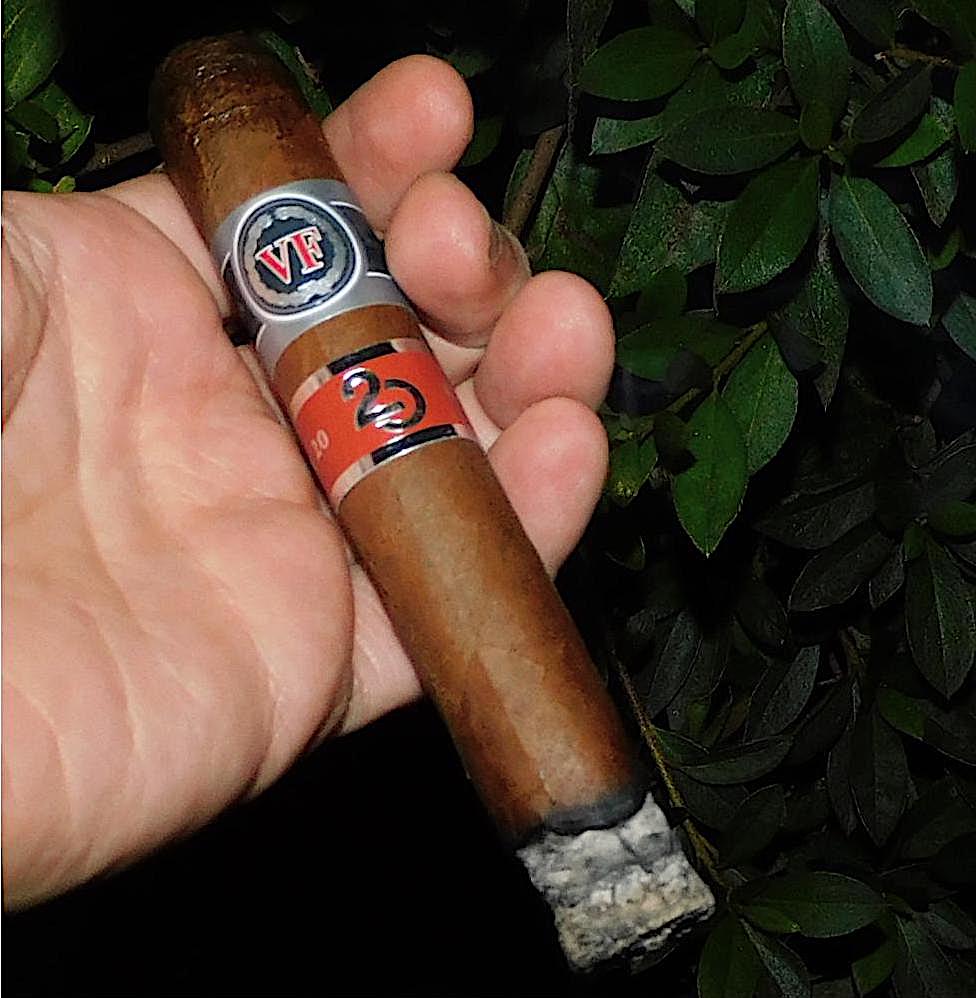 Burn of the VegaFina Fortaleza 2 Capa 20

In many cases, VegaFina cigars are skewed toward the milder side. The VegaFina Fortaleza 2 Capa 20  is going to be a bolder VegaFina, but not an overly bold one. This is a cigar that was medium in strength and medium in body from start to finish. There wasn’t much variance in the intensity of both the strength and body. At the same time, the strength and body did balance each nicely with neither attribute overshadowing the other.

The VegaFina Fortaleza 2 Capa 20 was very nice early in the smoking experience, but then the cigar seemed to lose its mojo. Some bitterness developed in the second third. At first, it added to the overall balance of the flavor profile, then it became harder to ignore. While there was a nice amount of complexity to the cigar, eventually the flavors became muddled.  The draw to this cigar could have also been better. In the end, while this is not an expensive cigar, it’s one that I felt could have performed better. I’m not sure if it was the 20-year-old wrapper that worked against what this cigar delivered or whether it was the rest of the blend. In the end, this is a cigar I’d recommend sampling first.