Agile Cigar Reviews are cigar assessments where we use a lightweight, shorter format. These will never take the place of our comprehensive reviews. They are only used on blends we have previously assessed. This might be a blend we are re-scoring or giving a score for the first time. It might be a blend we are looking at in a different size. Today we look at the Plasencia Alma del Fuego in the Concepción (Toro) size. This is a cigar we previously assessed in the core line back in June 2020 in the Candente (Robusto) size. 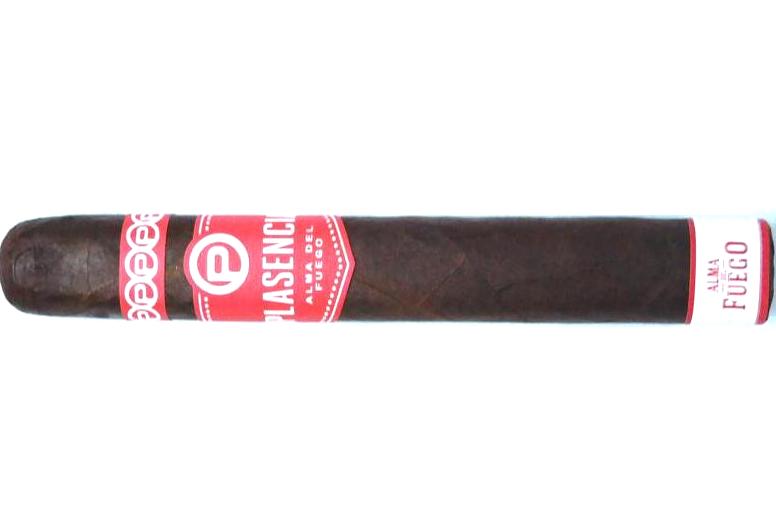 In 2019 Plasencia Cigars would launch Alma del Fuego, the third installment of its premium Alma cigar line. For over 150 years, the Plasencias have been known as world-class tobacco growers and cigar manufacturers. Things would change in 2017 when Plasencia Cigars would go full-force into the market by selling their own branded cigars and distributing them through their own company. In four years, the Plasencias have garnered both critical and commercial success, and much of this has to do with the success of the cigars released under the Alma brand. In 2020, the Alma del Fuego landed #20 on the 2020 Cigar Coop Countdown in the Candente (Robusto) size. Today we take a look at another size in the line – the Concepción (Toro)

Alma del Fuego” translates to “Soul of Fire”.  The blend incorporates a significant amount of Ometepe tobacco in the filler. Ometepe is an island in Lake Nicaragua where the Plasencias grow tobacco. The island has volcanoes on it, and as a result, the soil is volcanic. Volcanoes are known for fire, thus the name Alma de Fuego. The name Concepción refers to one of the two volcanoes on Lake Nicaragua. As for the rest of the blend, it consists of 100% Nicaraguan tobaccos. The cigar is finished with a wrapper from the Jalapa region. The Alma del Fuego Concepción size is 6 x 54 Cuban press.

The Plasencia Alma del Fuego Concepción started out with notes of coffee, chocolate, cream, dried fruit, and white pepper. There wasn’t much of a “mocha” fusion between the coffee and chocolate as they were separate in distant. Early on the chocolate, coffee fruit, and cream notes all were dominant notes. Later in the first third, the coffee and chocolate took over as the primary notes – alternating in intensity. As the cigar moved into the second third, the coffee notes emerged as the primary note where it held for the remainder of the smoking experience. There still were notes of pepper, cream, dried fruit, and chocolate rounding out the flavor profile. The last third saw some additional notes in the final third.

The flavors produced started out medium and quickly moved into medium to full territory. This was countered by medium strength. The burn did require several touch-ups to maintain a straight burn path and burn line. The draw was more open than I preferred.

The Plasencia Alma del Fuego Candente was good enough to make the Cigar Coop Top 20 last year. The good news is the Concepción size shines even more. I liked the fact it had more in the way of complexity, and the mineral component was neutralized for much of the duration of this smoking experience. In this case, the Concepción is the Belle of the Ball of this line. This is a great cigar I would recommend to an experienced cigar enthusiast or a novice looking to go into the medium-plus range. As for myself, this is a cigar I would buy again and it’s certainly one that garners box-worthy consideration.  Coming in at 91 points, this cigar exceeds the 90 point threshold for Cigar Coop Standard of Excellence.