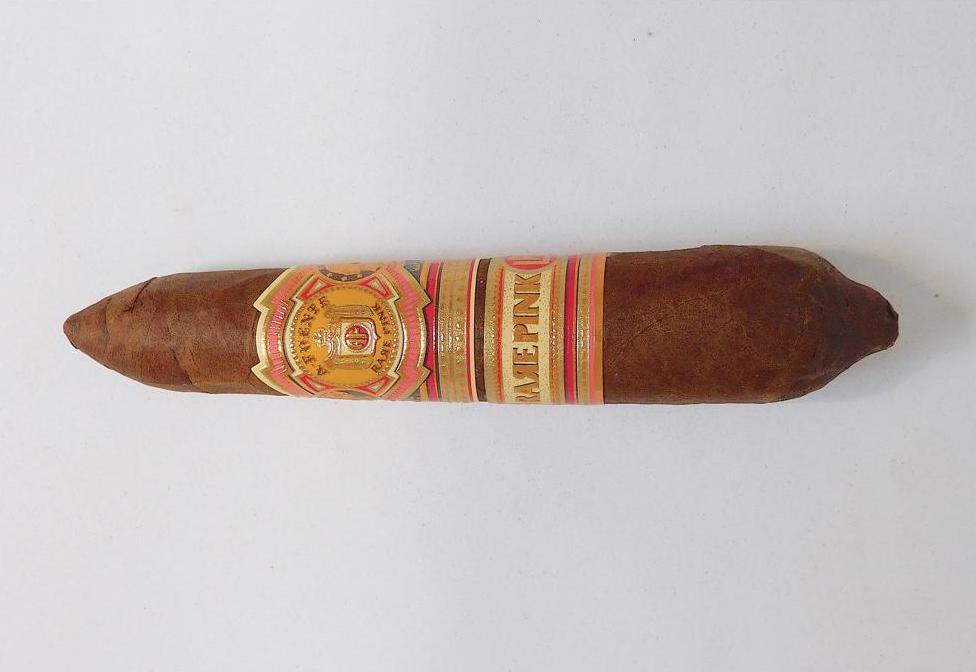 It isn’t every year that Arturo Fuente releases a new cigar line, but when one is announced, you know that it is going to create a lot of excitement. 2020 was a huge year for Arturo Fuente. During the pandemic, the company emerged as a powerful force on social media. Arturo Fuente already had a very strong base of fans, but essentially the company’s social media base woke a sleeping giant. When Fuente’s new limited edition line, the Rare Pink Vintage 1960’s series was announced in 2020, social media or not – it was bound to have demand. The Rare Pink Vintage 1960’s was meant to create and raise money for breast cancer as a portion of the sales of each box was dedicated to the cause. Details of the release were shrouded in mystery up until the point when the cigar was released. Today we take a closer look at the Arturo Fuente Rare Pink Vintage 1960’s series in the Work of Art (figurado) size.

The cigars were blended by Carlos “Carlito” Fuente Jr., who was inspired by his daughter Liana to create the line. Liana had lost both her grandmother and aunt to breast cancer and is very supportive of the cause of breast cancer research. The “Pink” theme represents the color for Breast Cancer Awareness, and it was integrated into the packaging and band. The Fuente family pledged $13.00 to Breast Cancer research from the sale of each box. 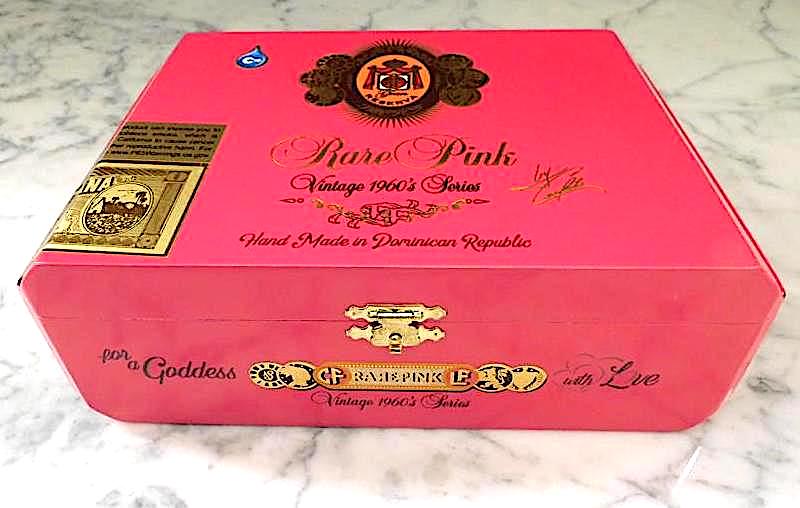 The Rare Pink Vintage 1960’s is a small batch, limited production series. The first two production runs have seen most retailers only get a handful of boxes. The boxes were initially allocated to those authorized Fuente retailers in good standing who attended the (IPCPR/PCA) Trade Show in 2019. There is no set schedule as to when the Rare Pink Vintage 1960’s cigar will be released – and those releases are subject to an unpredictable release schedule Fuente has become known for with its limited releases.

Without further ado, let’s break down the Arturo Fuente Rare Pink Vintage 1960’s Work of Art cigar and see what it brings to the table.

Most of the details of the blend of the Rare Pink Vintage 1960’s series have not been disclosed. The wrapper is an Ecuadorian Habano wrapper and there is some Nicaraguan tobacco that has been put into the filler.  The wrapper comes from the Oliva Tobacco family’s La Mecca farm (in Ecuador). Production is handled in the Dominican Republic at Tabacalera A. Fuente y Cia.

The Work of Art size is presented in 25-count boxes.

The Ecuadorian Habano wrapper of the Rare Pink Vintage 1960’s Work of Art had a medium-dark color to it. There was a very light coating of oil on the wrapper. There were some visible veins and a couple of wrapper seams that were visible. The cigar is tapered to a converged point by the cap. The Work of Art also has a Salomon-like footer. The widest point of the Work of Art tapers is near the footer. On the footer, it tapers in the opposite direction, with the cigar having a “nozzle”-like design and open at the base.

There are two bands on the Rare Pink Vintage 1960’s Work of Art. The bands are both highlighted by an antique color scheme consisting mostly pink, yellow, gold, red and brown. The center of the band has the brand’s red and gold “AF” shield sitting on a small white field and sitting on a larger yellow circular field. Above the shield is the text “A. FUENTE” in gold while below the shield is the text “RARE PINK” in gold. The yellow circular field has both pink and white trim. There are two brown medallions on each side of the yellow field. To the lower left of the circular field is the text “HAND” and the lower right has the text “MADE” – both in gold font on a brown stripe. The remainder of the band has pink, red, and gold adornments.

A straight cut was used to commence the cigar experience of the Rare Pink Vintage 1960’s Work of Art cigar. I used the Credo Special T Cutter, a cutter that contains two cutting holes. One of the cutting holes has a 38 ring diameter and is perfect for cutting tapered head cigars. This allows one to get a cut with a ring size that allows one to maximize the tapering experience the cigar has to offer.

Once the cap was removed, it was on to the pre-light draw. The cold draw was pretty straightforward – reliving notes of natural tobacco and earth. Overall this was a satisfactory pre-light draw experience. At this point, it was time to toast up the nozzle of the Rare Pink Vintage 1960’s Work of Art and see what the smoking phase would have in store.

The Rare Pink Vintage 1960’s Work of Art opened with more notes of natural tobacco. There were also notes of nut, coffee, citrus, and cedar present. The natural tobacco and nut notes moved to the forefront early in the smoking experience. The coffee, citrus, and cedar notes settled in the background. The retro-hale delivered mostly cedar notes. As the cigar burned past the nozzle, some white pepper surfaced on both the tongue and retro-hale.

During the second third of the Rare Pink Vintage 1960’s Work of Art, earth notes emerged in the forefront rather quickly and joined the natural tobacco. The nut flavors receded into the background and joined the citrus, coffee, and cedar notes. The pepper notes increased during the second third and transitioned to more of black pepper varietal on both the tongue and retro-hale.

The natural tobacco and earth flavors were the primary notes in the final third. The pepper notes were close secondary notes. The cedar notes somewhat increased in intensity as well – and there still were touches of citrus, nut, and coffee. This is how the Rare Pink Vintage 1960’s Work of Art came to a close. The resulting nub was slightly soft to the touch and cool in temperature.

Overall the burn of the Rare Pink Vintage 1960’s Work of Art maintained a straight burn path and straight burn line. The burn did need a little attention at the beginning when it transitioned from the nozzle to the base of the cigar. The resulting ash wasn’t overly firm. This ash had a salt and pepper color scheme to it. The burn rate and burn temperature were ideal. The cigar is going to seem to burn quicker in the second half, but that is due to the way the cigar tapers toward the head. 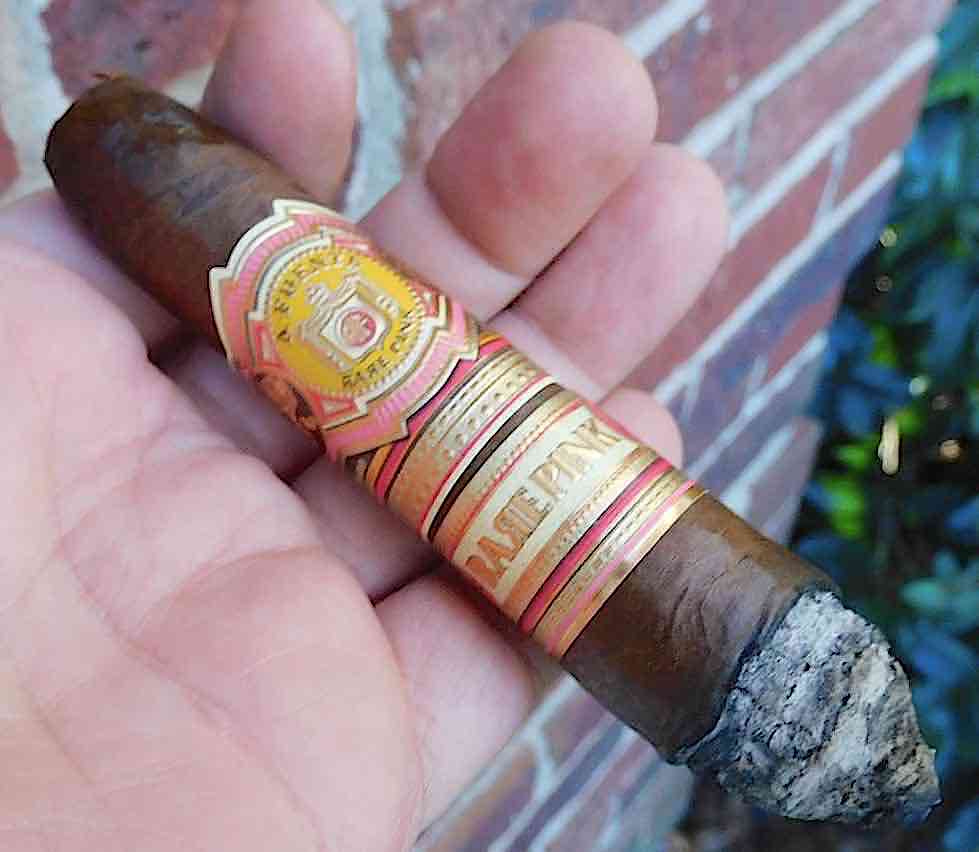 The draw to Rare Pink Vintage 1960’s Work of Art had a touch of resistance to it. This is something that I consider positive to a draw. At the same time, it wasn’t difficult to derive flavor from it.

There is no doubt the Arturo Fuente Rare Pink Vintage 1960’s cigar definitely has an “old school” vibe to this cigar. While I enjoy what Fuente has done with the Hemingway figurado sizes, I simply have not been a fan of the smaller sizes. The cigar experience is simply too short. While I haven’t smoked the longer sizes of the Rare Pink Vintage 1960’s series, my gut tells me these will be better.

The pricing is the other problem. While this cigar has a suggested retail price in the $11.00 range, the demand for this small production line has seen many retailers pricing this at double the pricing – and that’s unfortunate. On its own, this is a cigar I would still recommend to the novice or experienced cigar enthusiast. It’s a cigar I would buy and smoke again – but it’s not one I would chase down, nor pay the inflated prices of some of the retail community.

Ben Lee of The Smoking Syndicate and Cigar Coop recently assessed the Short Story size of the Rare Pink Vintage 1960’s and gave it a 91.