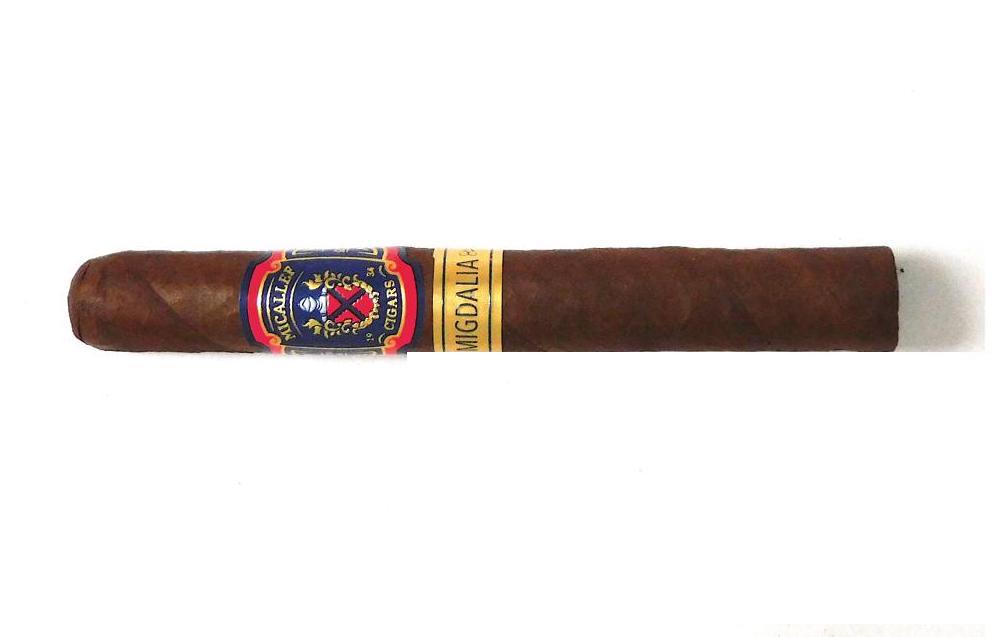 Early in 2021, Micallef Cigars announced a 5 x 40 line extension to its Micallef Migdelia line known as the Migadelia S.E. (Special Edition). The announcement of this vitola was meant to coincide with March 8th – which is International Women’s Day. It’s appropriate for this cigar because the creator of the blend is Migdalia Sanchez. Migdalia is a second-generation member of the Gomez-Sanchez family who produces Micallef Cigars. She was born in 1947 and has been involved in the tobacco industry since graduating from the School of Tobacconist in Havana, Cuba at age 17. Since the Migadlia line has launched, it has become one of the favorites of many in the Micallef portfolio. Today we take a closer look at the Micallef Migdalia S.E.

As for the release, the Migdalia S.E. is meant to spotlight the impact of strong women across all industries and walks of life, including the cigar business. At the time the Migdalia S.E. was released, Micallef Cigars President Dan Thompson commented:

“For too long, a myth existed proclaiming cigars are the domain of men, and nothing is further from the truth. Today, women play an integral role across every stage of the cigar industry. At Micallef women make up more than half our team across manufacturing, marketing, and sales. I’m lucky to have been surrounded by strong women at home and professionally my entire life. Not only are we celebrating the amazing women in our lives, Micallef Cigars is doubling down on our commitment to women across our business, the industry, and consumers. Our dream is Micallef Cigars will be known as one of the best products and experiences for all cigar lovers, men and women, when they chose us as business partners or as consumers.”

Without further ado, let’s break down the Micallef Migdalia S.E. and see what this cigar brings to the table.

The Migdalia blend is highlighted by two tobaccos Micallef Cigars is known to work with – San Andres Habano for the wrapper and Sumatra for the binder. The remainder of the blend consists of Nicaraguan and Dominican tobaccos. Production is handled at Micallef Cigars’ factory in Estelí, Nicaragua.

The Micallef Migdalia S.E. is the fourth vitola to be introduced into the Migdalia line. While the other three vitolas in the line are packaged in 24-count boxes., the S.E. is packaged in 12-count boxes. The packaging for the S.E. features Micallef’s new blue and red design.

The San Andres wrapper of the Micallef Migdalia S.E. had a medium brown color with a strong color tint. There was a slight amount oil on the surface of the wrapper. In addition, the wrapper had a slight silky complexion. There were some thin visible and thin wrapper seams on it.

Back of primary band of Micallef Migdalia S.E.

The secondary band is gold with a dark pinstripe near the top and bottom. In between the pinstripes are the text ‘MIGDALIA’ – also in a large font. On the back of the band is the text “MICALLEF CIGARS CELEBRATES STRONG WOMEN – Fierce Minds, Brave Spirits, Kind Hearts.”

Back of secondary band of Micallef Migdalia S.E.

Prior to lighting up the Micallef Migdalia S.E. a straight cut was used to remove the cap. After the cap was removed, it was on to the pre-light draw experience. The pre-light draw delivered mostly cocoa notes with a slight floral component. While I’m normally not a fan of any floral components, I found this pre-light draw was worked for me quite well and was satisfying. At this point, it was time to toast up the foot of the Micallef Migdalia S.E. and see what the smoking experience would have in store.

During the second third of the Micallef Migdalia S.E., the citrus notes had a grapefruit-like sweetness to it. The citrus notes increased and just past the midway point, it joined the damp earth in the forefront. Meanwhile, notes of black and white pepper joined the floral and cocoa notes in the background.

The final third saw the damp earth and citrus notes remain primary. There was an increase in the pepper notes on the tongue, and the floral and cocoa notes rounded out the flavor profile. This is the way the Micallef Migdalia S.E. came to a close. The resulting nub was slightly soft to the touch and cool in temperature.

The burn of the Micallef Migdalia S.E. performed quite well. The cigar required minimal touch-ups to maintain a straight burn path and a straight burn line. The resulting ash was on the firm side and has a salt and pepper look to it. As for the burn rate and burn temperature, both were ideal. 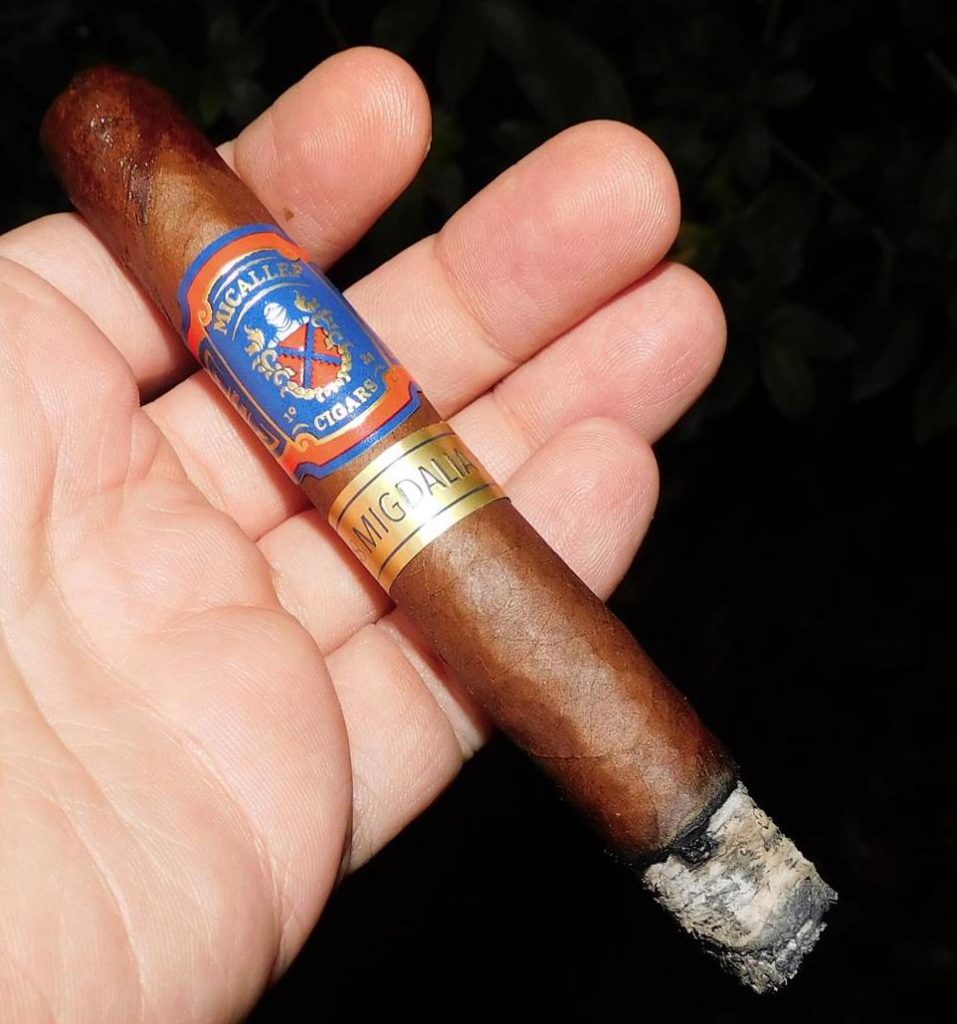 Burn of the Micallef Migdalia S.E.

The draw of the Micallef Migdalia S.E. performed well. I still prefer a little more resistance on the draw than what I got from the Migdalia SE., but the cigar was still low maintenance in terms of deriving flavors.

The Micallef Migdalia S.E. had some pop to it. This was a cigar that was medium to full in strength and medium to full in body from start to finish. There wasn’t much in the way of variance of the intensity levels of either attribute. When it came to strength versus body, I found the body maintained a slight edge throughout the smoking experience.

In my experiences of smoking the Micallef Migdalia line, it’s proven to be an enjoyable and consistent line. When it came to the Migdalia S.E., it was up against some tough competition among the other three sizes. The Migdalia S.E. delivered excellent flavors in the first half while the second half saw somewhat more of a drop-off. I found some of the damp earth flavors in the first half worked well – similar to the way these flavors work well in Steve Saka’s Mi Querida.  In the end, there was still enough going on with this cigar to satisfy – especially if you are looking for about a 45-minute smoke. It’s a cigar I would recommend to either an experienced cigar enthusiast or novice cigar enthusiast looking for something medium-plus. As for myself, this is a cigar I certainly would buy and smoke again.