The Quesada Keg is a limited edition cigar that recently has arrived on retailer shelves. This release of this cigar is meant to coincide with St. Patrick’s Day celebrations as this cigar is designed to be enjoyed with an Irish Stout. This isn’t the first cigar made by Quesada that is meant to pair with a malt liquor as the annual release Quesada Oktoberfest is designed to be enjoyed with a traditional marzen beer. In addition to the Quesada Keg being a completely different blend from the Oktoberfest, there is also one other significant difference – namely it is made at the Plasencia factory in Nicaragua as opposed to Quesada factory in the Dominican Republic. While Quesada’s Casa Magna brand is made at Plasencia, this marks the first Quesada branded cigar to be made outside the Dominican Republic. Recently I have had an opportunity to smoke the Quesada Keg. Overall this is an outstanding blend – and one that I can definitely see being ideal paired with a stout.

When the Quesada Keg was announced, Terence Reilly of Quesada Cigars provided some additional context of the project:

“Being half Irish I have always wanted to work on a project for St. Patricks day. Success with our Oktoberfest brand pairing cigars with beer got me excited to do something for St. Patricks. Initially, we couldn’t find the right blend in the Dominican to match the tasting notes of the more popular Irish stouts as we had done with marzen beers for Oktoberfest so we turned to our friends the Plasencias in Nicaragua. There, we found the blend we were looking for. It’s been a fun project to celebrate a fun day.”

As a part of this project, the packaging of this cigar is most unique.  The cigar is literally packaged in a container that looks like a wooden keg.

Without further ado, let’s take a closer look at the Quesada Keg and see what this cigar brings to the table.

For the Quesada Keg, the cigar incorporates a Pennsylvania Broadleaf wrapper over Nicaraguan binder and filler.

The Quesada Keg is currently available in one size – a 6 x 50 Toro. There have been 250 kegs produced and each Keg contains 21 cigars.

The Pennsylvania Broadleaf wrapper of the Quesada Keg has a chocolate brown color to it. Upon closer examination, some darker marbling can be seen. This wrapper has a bit of a rugged feel to it, but it gives the cigar a lot of charm. The wrapper is not a very oily wrapper. The surface of the wrapper is slightly bumpy. There are some thin visible veins, but most of the wrapper seams are well hidden.

The band of the Quesada Keg is quite different than anything that Quesada Cigars has done before. It’s a very simple band. The band is white in color with gold trim on the top and bottom. Prominently displayed on the front of the band is the text “QUESADA KEG” in black font. There is a green shamrock to the left and right of the text.

I went with my usual choice of a straight cut before lighting up my Quesada Keg cigar. Once the cap was clipped, I moved on to the pre-light draw. The cold draw provided a mix of chocolate, earth, and light spice. While the flavor profile of the pre-light draw was simple, I did find it quite satisfying. At this point I was ready to light up the Quesada Keg and see what the smoking phase would have in store.

During the second third, the dark chocolate notes took on some more sweetness.  I definitely found this to be the best part of the cigar.  Meanwhile the earth and pepper notes were secondary notes, while the lager notes remained more distant.

On the last third, the dark chocolate had its sweetness dial back slightly, but did not lose all of its sweetness entirely  Meanwhile the earth notes moved into the forefront.  The white pepper slightly increased, but was still a background note.  This is the way the experience of the Quesada Keg came to a close.  The resulting nub was firm to the touch and cool in temperature.

Overall I found the burn of the Quesada Keg to perform well.  The burn remained relatively straight from start to finish – requiring only occasional touch-ups along the way.  The resulting ash was mostly white in color with some dark speckling mixed it.  The ash itself was not overly tight, but was still on the firm side.  The ash came off the Keg in nice clean chunks.  The burn rate and burn temperature were ideal. 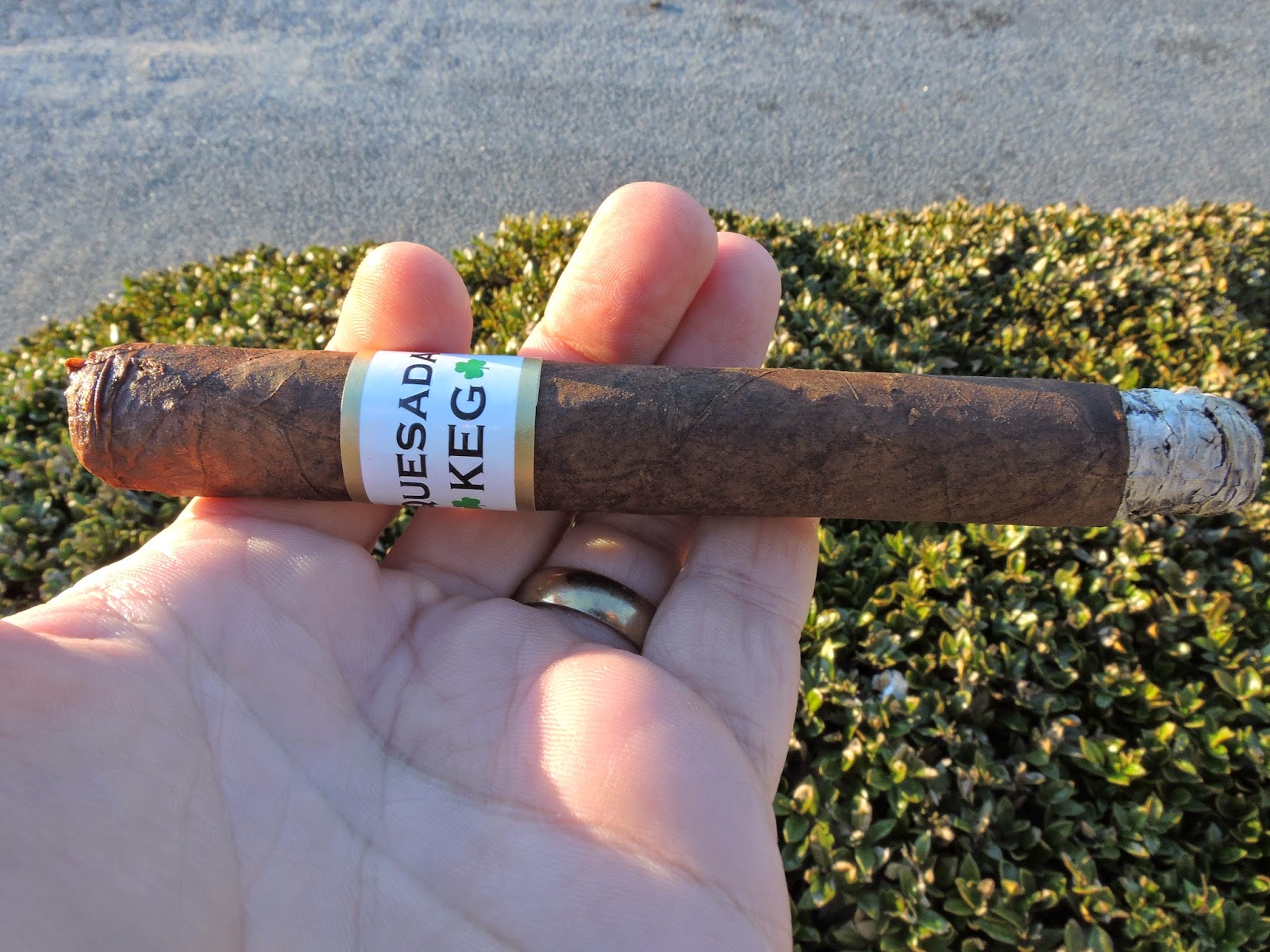 The draw to the Quesada Keg was not too loose, nor was it too tight.  I did find there was an ample amount of smoke production from this cigar.

The Quesada Keg is not going to be a nicotine bomb.  From a strength perspective, I found this cigar to be medium strength from start to finish.  In terms of the flavors, they are not going to weigh very heavy on the product.  I also found the Keg to be a medium-bodied cigar throughout the smoking experience.  The strength and body balanced each other nicely with neither attribute overshadowing the other.

Overall I found the Quesada Keg to be a very enjoyable cigar. While the Oktoberfest is a cigar that has positioned for pairing with a beer, I actually think the Quesada Keg makes for a better pairing. The Keg seems ideal to be paired with not just an Irish Stout, but also an Imperial or Chocolate Stout. Perhaps the best part of this is that the Quesada Keg is a cigar that stands out nicely on its own. This isn’t the most complex cigar, but it is one that still delivers some great flavor. The $7.95 price point and the wooden keg styled packaging are a bonus. While this cigar exhibited no signs of youngness, I thnk this cigar has some serious aging potential.  This is definitely a cigar I’d recommend to either as a novice or experienced cigar enthusiast. I certainly would recommend it to someone who would like to pair this with a Irish, Imperial or Irish Stout. It’s a cigar I would smoke again and easily worth a box / keg split.