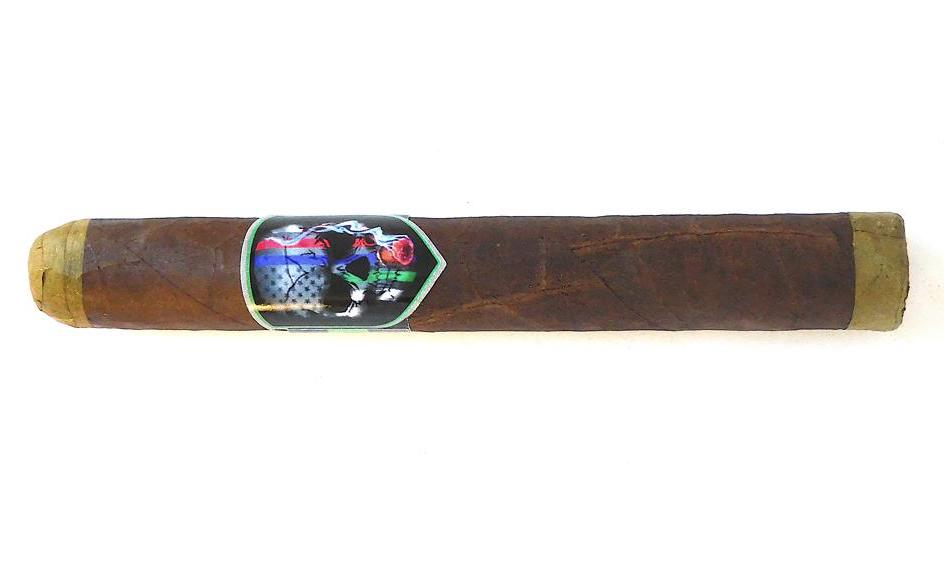 Frontline Cigars is owned by Steve Boik, a former law enforcement officer. Paying homage to law enforcement, first-responders and military is a theme that is incorporated in the brand. The Defender Series is one that is focused on paying respect to those in the Armed Services. This is incorporated into the design of the cigar itself as it utilizes candela accents on both the cap and around the footer.

Without further ado, let’s break down the Frontline Defender Toro and see what this cigar brings to the table.

While the candela accents are noticeable, the base wrapper is a San Andres Maduro wrapper. In addition, the cigar incorporates Nicaraguan tobaccos for the binder and filler. The filler is from Estelí and Jalapa with some ligero primings to amp up the cigar. Production is handled at Tabacalera La Familia, a factory owned and operated by Rafael Jaca, owner of Don Rafa Premium and Sweets Cigars.

The Frontline Defender is available in four sizes:

The San Andres Mexican wrapper of the Frontline Defender Toro had a dark roasted coffee bean color. Upon closer examination there was some mottling that was visible. The wrapper itself had a light coat of oil on it. There were some visible veins and visible wrapper seams. The candela accents have an olive green color – this includes the candela on the cap and around the footer.

A straight cut was used to remove the cap of the Frontline Defender Toro. Once the cap was removed it was on to the pre-light draw experience. The pre-light draw delivered a mix of coffee, citrus, and grass notes. No doubt there was a little residual candela remaining from when the cap was removed, but nonetheless, this was still a satisfactory pre-light draw. At this point it was time to toast up the Frontline Defender Toro and see what the smoking phase would have in store.

The start of the Frontline Defender Toro essentially kicked off with notes of sweet citrus and grass. As the cigar burned through the candela section of the footer, notes of black coffee and white pepper emerged. As the Frontline Defender Toro came out of the candela section, the black coffee notes surfaced as the primary note. The grass, citrus, and pepper notes settled in the background. There were also some residual cream notes present. Meanwhile there were notes of cedar and pepper on the retro-hale.

During the second third of the Frontline Defender Toro, the black coffee notes remained grounded in the forefront. The citrus notes emerged as the most prominent of the secondary notes. The other secondary notes included the pepper and grass notes. During this phase, the grass and cream notes diminished while the white pepper notes increased.

The final third of the cigar saw the black coffee notes remain primary. By this time the citrus and pepper notes were close secondary notes. There also were some residual grassy notes present. This is the way the Frontline Defender Toro came to a close. The resulting nub was slightly soft to the touch and cool in temperature.

While the burn of the Frontline Defender Toro maintained a straight burn path, it did require frequent touch-ups to meet that. The touch-ups did the trick, but there were more than I prefer. The burn line was jagged from time to time, and the touch-ups remedied that as well. The ash wasn’t overly firm, but wasn’t loose nor flakey. This ash had a silver gray color with some darker streaks. As for the burn rate and burn temperature, both were ideal.

Burn of the Frontline Defender Toro

While normally I prefer a touch of resistance on the draw, in the case of the Frontline Defender Toro, it was a little more than I prefer. At no time did the cigar require a re-light. This was also a cigar that produced ample amounts of smoke.

When looking at strength versus body, the body maintained the edge for the duration of the smoking experience.

The Frontline Defender Toro delivered a solid smoking experience. This wasn’t my first experience of a cigar with candela accents, but it is profile that I have enjoyed in the past as well as with the Frontline Defender Toro. These cigars have the ability to deliver a small dose of candela qualities on top of the overall experience – making things interesting. At $7.95, I found this cigar delivered a nice value point. In the end this is a cigar I would recommend to either a novice or experienced cigar enthusiast. As for myself, this is a cigar I would buy and smoke again.