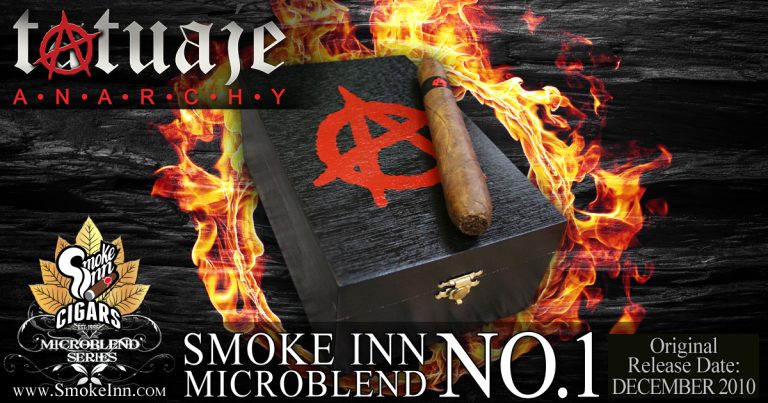 NFT fever has gripped the cigar industry. Today. Abe Dababneh of Smoke Inn Cigars and Pete Johnson of Tatuaje Cigars have announced they are teaming up for a special NFT tied to the Tatuaje Anarchy. The Anarchy is a cigar that was one of the industry’s most popular single-store releases.

“It seems hard to deny the depth of consumer interest these days in specialty NFTs, especially if it is tied to a highly sought-after product. In my personal opinion, there has been no single store cigar release in the history of the premium cigar business greater than the original Tatuaje Anarchy. Anarchy was the first installment of our MicroBlend Series released in December of 2010. Production was 1500 – 15ct boxes, which at the time, and maybe still, is the largest run ever of a single store limited release. Amazingly, only 3 months later, and after the 2011 March issue of Playboy Magazine wrote about this cigar, an additional run of 1500 boxes were ordered. The original Anarchy was released again in 2015 in a very special offering of only 666 boxes that sold out almost instantly. The cigar has a proven track record and huge following amongst cigar lovers and collectors alike. This very special NFT offering will put this cigar to rest forever, only ever being made available to the lucky people who are fortunate enough to purchase one of the Tatuaje Anarchy NFTs. “I can’t wait to see what happens,” states Abe Dababneh in a press release.

According to Smoke Inn, there will be seven numbered unique original art NFTs, each completely different. Six NFTs (numbered 1-6) will be sold via six separate live auctions, held one after the other sometime in early 2023. The seventh NFT will be issued to Smoke Inn Owner and Anarchy brand creator, Abe Dababneh.

“I could not imagine not owning one of these NFTs for myself and the company, it is where it all started. For obvious reasons of conflict, we cannot be part of the bidding process. Our issued NFT will give us the exact same privileges and offerings as each other NFT owner,” added Dababneh.

Each NFT will come with a Special 60ct Collector’s box consisting of 45 of the original Tatuaje Anarchy, and 15 very special Anarchy Pale Horse Editions that will only have ever been made for the NFT holders. The Pale Horse Edition mimics the original blend but uses a special claro wrapper instead of the original Habano maduro. The pale horse variant was originally used in the Anarchy KAOS 3 cigar set that was offered to attendees of the 2020 Great Smoke Pre-Event Dinner that was hosted by Pete Johnson. Only 300 Pale Horse edition cigars have ever been made to date. In addition, the winning bidders will receive a Canvas Version of their NFT and the ability to purchase 15 (15ct) boxes per quarter annually at a price of $14 per cigar.

Pete Johnson comments about the project, “I’ve never fully understood NFT’s but when Abe pitched me his idea and explained how he wanted to bring back the original Anarchy in this offering, I immediately wanted to be involved.”