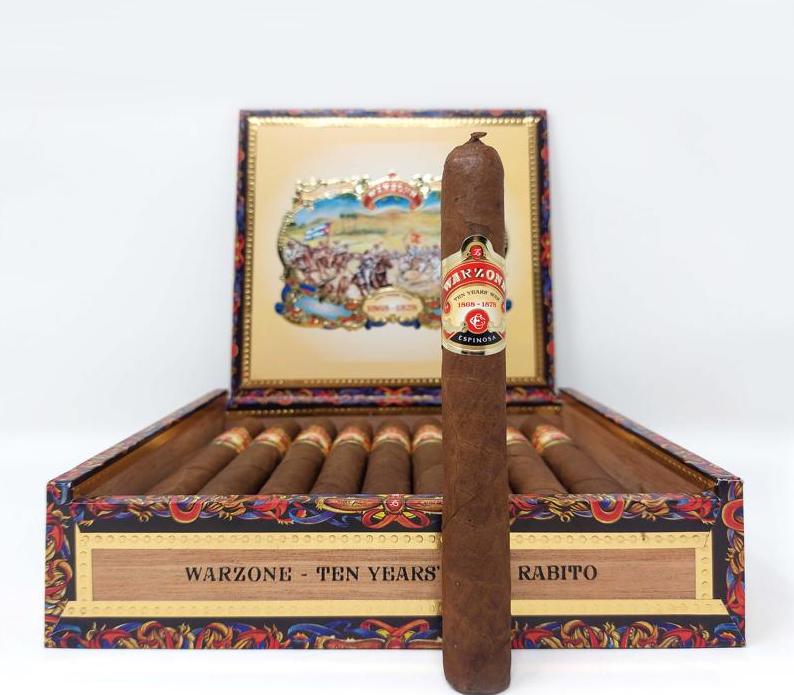 The Warzone Rabito, the fourth size in the limited edition collaboration Warzone series between General Cigar and Espinosa Cigars, is heading to retailers. The two companies have also announced that this will be the final release of the Warzone Series.

The Rabito is actually a signature size found in the Espinosa portfolio. The vitola measures 6 x 46 and features a pigtail cap. The blend for the Warzone Rabito is the same as the previous releases. It features a five-year-aged Cameroon wrapper, Honduran binder, and a combination of Nicaraguan and Colombian fillers. Production is handled out of Erik Espinosa’s La Zona factory. General Cigar Company handles distribution for Warzone. Each of the 1,500 boxes made contains 20 cigars. Pricing is set at $9.19 per cigar.

“Warzone has been a very successful collaboration, so it should come as no surprise that Justin Andrews and I wanted to end the trilogy on a high note, so to speak. And since Team Espinosa blended our first Cameroon-wrapped cigars with Justin under Warzone, we agreed that we would take Cameroon to another level with our final release. There was no question when we had the blend that embodied our vision…it was like the lights turned on for all of us…we instinctively knew it was right,” commented Erik Espinosa in a press release.

The Warzone made its debut in 2019 and was released in Toro and Robusto sizes. In 2020, a Short Churchill size was added.