Agile Cigar Reviews are cigar assessments where we use a lightweight, shorter format. These will never take the place of our comprehensive reviews. They are only used on blends we have previously assessed. This might be a blend we are re-scoring or giving a score for the first time. It might be a blend we are looking at in a different size. Today we look at the Warzone Box Pressed Short Churchill. This is a cigar line we previously assessed in the Toro size back in March 2020. 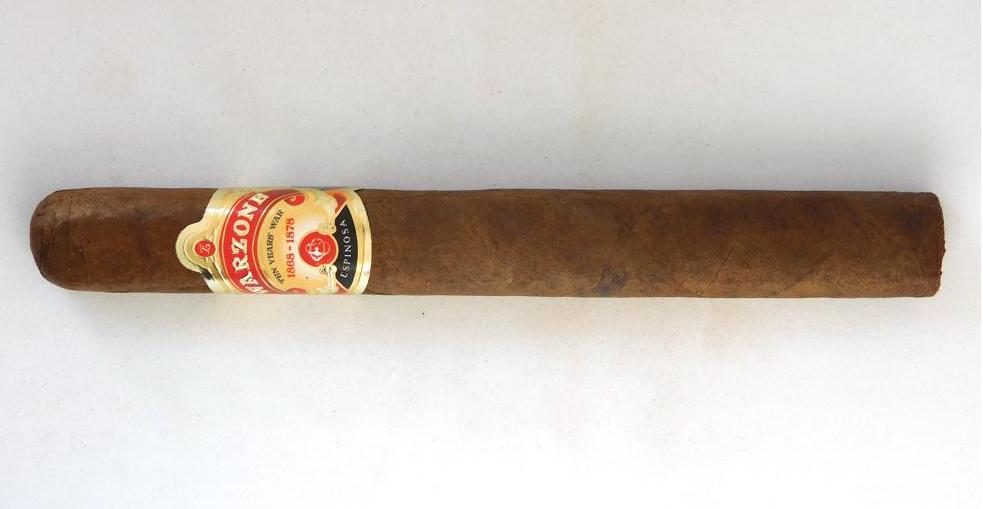 Warzone is a limited production brand that is a collaboration between Espinosa Cigars and General Cigar Company. It’s a brand that is produced out of Espinosa’s La Zona factory in Estelí, Nicaragua, but it’s one that is sold by General Cigar. While General Cigar has produced cigars at third-party factories before, this still isn’t something very common. One highlight is the use of a Cameroon wrapper on the blend, the first time Espinosa has worked with this wrapper. Warzone made its debut in 2019 in two sizes, a Robusto and Toro. In 2020, the Robusto size was brought back for another run, but a third size was introduced in the form of a Box Pressed Short Churchill. Today we take a closer look at the Warzone in the Box Pressed Churchill format.

The name Warzone was inspired by the Ten Years War – a war fought in Cuba between Cuba and Spain as a part of Cuba’s overall fight for independence from Spain.

In addition to the Cameroon wrapper, the remainder of the blend is also “out of the box” for Espinosa Cigars. Warzone features a Honduran binder over a blend of Colombian and Nicaraguan fillers. The Box Pressed Churchill measures 6 1/2 x 48 and is packaged in 20-count boxes. Currently, there has been a single production release of the Warzone Box Pressed Toro. The Warzone Box Pressed Short Churchill made its debut at Espinosa’s 2020 Virtual La Zona Palooza event before making its way to stores.

The Warzone Box Pressed Short Churchill medium strength, medium-bodied smoke. There was a subtle increase in the intensity of both the strength and body, but in the end, both attributes remained in the medium range for the duration of the smoke. Burn-wise, the Warzone Box Pressed Short Churchill did need some touch-ups along the way to keep the burn line straight as well as on a straight burn path. The draw was slightly open.

Much like the Toro size, the Warzone Box Pressed Churchill starts out to be a classic Cameroon smoke, but as the cigar experience progressed, there was an increase in spice delivering what I call the “Espinosa bite.” I found the Box Pressed Churchill to be slightly dialed back in strength and body when compared to the Robusto and Toro sizes for 2019, but that doesn’t take away from the enjoyment. This is certainly I cigar I would recommend to any cigar enthusiast. It’s a cigar that I would buy multiples and smoke again. Coming in at 90 points, the cigar earns a Cigar Coop Standard of Excellence designation.