Thursday night – the final night of IPCPR.  A very long week, but a most fulfilling week.   What better way to close out the week than to go for a gourmet meal at Emeril’s in the French Quarter.   I will state this, for me – it was all about the sticks.  I would have much preferred to good cigar lounge instead of spending cycles eating in a restaurant.   So I admit, I wasn’t doing handstands about eating a long meal out.  However, I must admit – I was wrong – what a meal this was!  It was filled with great food and lots of cigar-ebrities!  As I’ve mentioned many times in this series, a lot of the fun of IPCPR is being around the “rock stars” of the cigar industry.  Our night at Emeril’s was filled with them.   On top of that, there was always still evening time to hit the smokes – and Don Leoncio’s provided the perfect atmosphere for those late night cigar smokes.

First Emeril’s.   The group had hoped to eat in the kitchen, but that didn’t work out.  This was an unbelievable meal.   Here is the menu (and we got much more than what was listed here) and a sample of the dishes.   I talk a lot about “cigar art”, but this was “culinary art”. 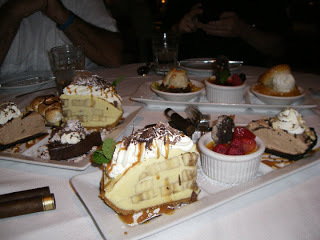 Now for the Cigar-ebrities.   There were four that we saw during our meal at Emeril’s.

1.Kaiser Hansotia (Gurkha Cigars) – he was the one who got the kitchen table.   If you read Part 4 of Tales from the IPCPR, you know the story how we challenged Kaiser with the Gurkha coin.  Kaiser also sent our table a bottle of wine! 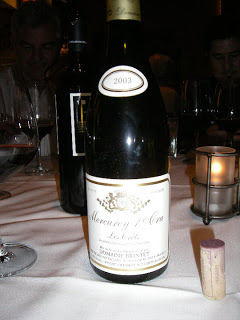 2.Jonathan Drew (Drew Estate Cigars) – Stace’s hero dropped by our table to say hello.  You can see the picture at the top.  He also brought a little surprise for us to enjoy afterwords.

3.Nestor Miranda (Miami Cigars) – the legendary blender was sitting right next to us.   Sorry for the paparazzi-like picture Nestor!

4.Abe Flores – He is the mastermind behind Pinar Del Rio cigars – one of the up and coming brands in the cigar industry.  Abe also owns the local cigar nightspot that was the hot place called Don Leoncio’s.  This is where we all headed afterwords (as well as pretty much every night)

Don Leoncio’s was a great place to hang and enjoy a cigar with a beverage.  It’s a classic old school place located in the heart of the French Quarter.   Rock stars of the cigar industry were there every night – and I’ll throw in some of the great cigar bloggers who came to IPCPR too!

So this wraps up the actual “Tales” from the IPCPR.   There still is one more installment though – the Epilogue.   This will be my personal editorial of the trade show – so stay tuned.