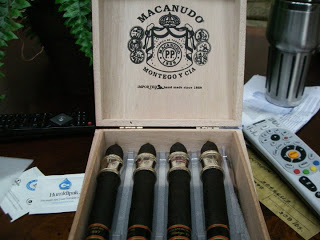 The Macanudo brand has been well-known among cigar enthusiasts and cigar novices for some time.  Macanudo’s reputation has basically been built on cigars known to be on the milder side.   About two years ago, Macanudo sought to change that image by introducing the full-bodied Macanudo 1968. – a very good cigar.   This year, Macanudo continued the trend toward moving away from milder cigars with the introduction of the medium-bodied Macanudo Cru-Royale and the medium to full-bodied Macanudo Vintage 1997 Maduro.  I’m pleased to report that Macanudo has continued their trend of being able to successfully penetrate into the area of cigars outside the mild spectrum.  I was so pleased with the 1997, I ranked it as my #24 cigar for 2010.

The cigar contains a beautiful oily Connecticut Broadleaf Maduro wrapper that has been aged for thirteen years.  For a limited time, there is an extra bonus – a metal band as opposed to a paper band. The band contains the words “Reserva Dorado 2010” on it.   There is also a second paper band toward the foot of the cigar.  The plan is for a paper band to also replace the metal band in 2011.  The cigars are sold in boxes of 12.

Here is a closer look at the blend:

The cigar is available in two vitolas:

For the purposes of this review, I smoked the Perfecto.   Therefore, I put a straight cut into the cap, toasted the foot of the perfecto (after removing the second band from the foot), and began the smoking experience.   For as beautiful the metal band is, you are going to need to remove it.  The metal band is quite weighty and it will make for an awkward feeling as you smoke the stick.

The initial flavor notes are going to have a tone of roasted coffee – kind of reminds me of percolated Chock Full o’ Nuts coffee on the streets of New York.   Eventually some sweet notes are going to layer on top of the coffee – namely a combination of black cherry and raisin.  This makes for some nice Maduro sweetness. These sweet notes will eventually become more dominant than the coffee notes.

The cigar was advertised as having spicy fillers, but I really didn’t get any spice until about halfway through the smoke, where I got a hint of black pepper over the sweet and coffee flavors.   At the same time, there also were some wood notes that emerged.   The pepper notes won’t last very long as they will fade toward the background along with the Maduro sweetness.   The wood notes and the coffee eventually are the flavors that bring this cigar to a finish.  The cigar finished with a cool, but soft finish (I kind of expect this with a Perfecto).

Overall, I’d categorize this as the high end of the medium strength category (a notch just below that Medium to Full range) and a Medium to Full in terms of body.  The draw and burn were good on this cigar.  The burn particularly got better as these cigars have aged.

These cigars come in slightly above the value-priced range at $8.00 to $10.00.  Considering this is a good smoke and the metal band is limited, I can live with this price considering what this cigar brings to the table.  The Macanudo Vintage 1997 Maduro was an enjoyable cigar.  I’ve given this to some people that like full-bodied, full-strength cigars and they appreciated what this particular Maduro brought to the table. In fact, some folks told me while the metal band was nice, they would also enjoy this cigar with a paper band.  I would concur with that assumption.