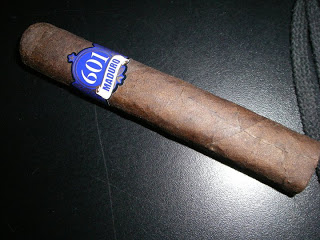 Recently when I attended a Rocky Patel Event in Greenville, NC, I opted to smoke the 601 Maduro (Blue Label)cigar.  Usually when I attend an event, I like to enjoy a cigar by the manufacturer/company of the event.   Last year, the 601 line was acquired by Rocky Patel Premium Cigars, therefore I felt this stick more than qualified to smoke at the event.  The 601 line has gotten a lot of love from the cigar world over the past four years and the 601 Maduro is probably the stick that has received the most love.  In fact, this cigar rated #6 on Cigar Aficionado’s 2009 list (even though the stick had been out well before 2009).

First up, the 601 line was founded a part of Eddie Ortega and Erik Espinosa.  Last year, Ortega and Espinosa split from Miami Cigars (which was handled their distribution).   Shortly afterwords, Rocky Patel Premium Cigars acquired 50 percent of United Tobacco.  United Tobacco was renamed EO Brands (Espinosa/Ortega) and is now sold and distributed as a part of Rocky Patel Premium Cigars.  At the same time, there was a change in the packaging.   The gold-colored adorned label was replaced by a more simplistic band highlighting the 601 name.  This caused a quite a stir among 601 fans because the original band was pretty popular.

The 601 Maduro is a all-Nicaraguan Puro that had the legendary Don Pepin Garcia involved in the blending of this cigar.  Of the 601 series, it is the only 601 blend that is available exclusively in a box-press vitola.  This represented not only Pepin’s first Maduro cigar, but also Pepin’s first box-press.  Here is a synopsis of the blend:

The 601 Maduro is available in four vitolas:

The cigar launches with what I would term the signature Don Pepin pepper blast – a healthy dose of pepper notes that is common with a lot of Pepin sticks.   It doesn’t take long for chocolate and coffee notes to emerge.  The pepper begins to diminish as the cigar reaches the 1/3 point of the smoke.    Around the midway of this smoke the chocolate gets very rich.   It is also around this point where you get the natural sweetness that a Maduro wrapper brings to the table.   Toward the last third of the cigar, there is a pretty strong kick to the finish with some more peppery spice that begins to re-emerge.  The deep chocolate notes transition to something along the lines of a strong cup of coffee.

The 601 Oscuro (Green Label) is considered the strongest of the 601 line and I would agree with that, however the Blue Label holds its own.   From a strength profile, I have this in the upper end of the medium to full range, with the last third definitely a full-strength smoke.   The body of this cigar is full throughout – you will not hit any dead spots in terms of flavor.   The burn and draw are classic Pepin quality – excellent throughout.

It is worth noting that despite the packaging change, the word is that the integrity of the blend has stayed the same.  After smoking a sample with each packaging, I would agree.    If you are looking for a very good Maduro cigar, this one definitely is one to try.

« Jim Colucci of Altadis USA to Retire at the end of July » Green Alert: Victories Against the Pleasure Police