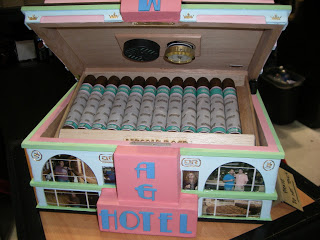 At the 2012 IPCPR Trade Show in Orlando, Florida, Oliveros Cigars hosted a media session for several members of the online media.   The session covered two main areas:1) An understanding of some of the company’s restructuring, line consolidations and repackaging; 2) A walk-thru of the new offerings (and existing offerings for those not familiar with the brand).   The session was hosted by Oliveros’ president Rafael Nodal as well as Hank Bischoff and Fabian Barrantes.

Positioning of the Brands within Oliveros

Oliveros then discussed some of the line consolidations and re-packaging around its King Havano line.  We covered this in a separate article.

As for the new cigars, here is a quick run-down.  We have detailed previews on each:

The booth was also proudly displaying a SoBe Limited Edition Humidor (see above) that will be made available to retailers.

The lines of Boutique Blends definitely appear to be the hottest among the lines.   The interesting facet is the contrast of old and new within Boutique Blends.  The marketing of Aging Room Cigars appears to have more of a traditional focus, while Swag has a more contemporary focus.  This allows the company to position itself with consumers in both market segments.

Within Aging Room Cigars, I took a look at the banding of the three blends that make up that line. I noticed the Aging Room Havao Connecticut differed from the existing Aging Room M356 and new Aging Room Quattro F55. Nodal told me this was intentional.  The Havao Connecticut is being looked upon as a core line while the M356 and F55 are more along the small batch lines.