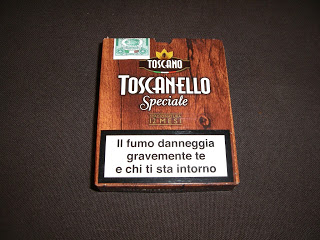 The Toscanello Speciale is a cigar made by Manifatture Sigaro Toscano. While this was a cigar that was introduced in 1998, it is a cigar that is gaining some attention as of late. Namely because it is a cigar that incorporates fire-cured tobacco.  2013 will probably go down in cigar history as the year of fire-cured cigars as companies such as Leccia Tobacco, Drew Estate, and Gran Habano have incorporated fire cured tobacco into new releases, but Manifatture Sigaro Toscano has actually been doing it for some time – and the Toscanello Speciale is one of those cigars.  The Toscanello Speciale is a small half-cheroot – pretty much a rustic looking cigar seen in a spaghetti western.  I recently have had an opportunity to smoke some of these cigars.  I definitely found this to be a different cigar, but one that can be a nice primer for what fire-cured tobacco can bring to the table.

Back in May, we did a feature story on fire-cured tobacco.  In that story, we discussed how fire curing tobacco differs from traditional cigar tobacco curing methods:Most cigars utilize air curing for tobacco.  With air curing, the tobacco is hung in a barn for several weeks to remove moisture from the leaf.  Sometimes charcoal is used as a part of the process to control the humidity.  With Fire Cured tobacco, hardwoods are kept on continuous, low smoldering flames to remove the moisture.  Typically this process is used for pipe and chewing tobacco.  The idea of the fire cured releases is to also produce a smokey, camp-fire like flavor in the final product.

Florence 1815: At a tobacco factory belonging to Ferdinand III (then the Grand Duke of Tuscany), a bale of Kentucky tobacco leaves which had been drying in the open were caught in an unexpected downpour of rain


The wet tobacco started to ferment. Instead of throwing all the tobacco into River Arno, the fermented leaves were dried and made into inexpensive cigars to offer to the people of Florence. A simple band is put around each cigar, which today is still one of Toscano’s characteristics.

Its uniquely “new” flavor and rich aroma became an instant success with the Italian people, and soon garnered much popularity amongst some of its prestigious smokers such as King Vittorio Emanuele II, Garibaldi, Verdi, Puccini, Mascagni. And finally found its way between the fingers of notable artists such Renzo Piano, Mario Soldati, Marcello Mastroianni, Francis Ford Coppola and Sergio Leone, who made it famous through Clint Eastwood in some of his unforgettable Spaghetti Westerns.

Without further ado, let’s break down the Toscanello Speciale and see what this cigar brings to the table.

The blend is pretty unorthodox when you compare it to many of the mainstream cigars available today. The tobaccos used are different as they are a mix of American and Italian Kentucky tobacco. From the web-site, the wrapper is made from a fire-cured American Kentucky Tobacco leaf.  This wrapper is smoked for over a month using aromatic woods.  No binder is listed, but from reading the web-site, it appears that the wrapper also serves as a binder for the cigar.

The filler contains a mix of both American and Kentucky tobacco that includes cuts of the smoked wrapper.

The Toscanello Speciale is available in one size – one that measures 3 inches with a 36 ring gauge.  The shape of the cigar almost looks like a small horn.  The cigars are packaged five to a (small) box.

As mentioned, the shape of the Toscanello Speciale is a half-cheroot that looks like a horn.  This is a rough and rustic looking cigar – and this gives the cigar some charm.  The wrapper is almost a maduro color.  It has a very bumpy and toothy surface.  The wrapper seams are pretty well hidden. The cigar comes unbanded.

ItalianSmokes.com positions the Toscanello Speciale as having an “intensely bitter” taste.  I found this to be true, but it also does not mean that bitter translates to harsh.

The start to the Toscanello Speciale starts out with leather and some of the fire-cured “campfire” smokiness.  The campfire smokiness was definitely more prominent on the retro-hale.  I found these notes fused very well together.  In the background was a touch of citrus and a touch of background spice.

In the middle of the first half, the leather notes transitioned to notes of chicory – which became the primary flavor note.  This gave the Toscanello Speciale its bitter profile.  The campfire smokiness was still second – with the leather, citrus, and spice more distant.  As the cigar moved toward the mid-way point, the spice also mixed in with the campfire smokiness on the retro-hale.  This is the way the flavor profile held until the end.

There was no harshness at the end of the Toscanello Speciale.  The resulting nub was firm to the touch and cool in temperature.

For a rugged looking cigar, the Toscanello Speciale had a very good burn.  Once it was lit, there was very little that needed to be done to keep it burning straight.  The resulting ash was a little loose – and had a salt and pepper color.  Both the burn rate and burn temperature were ideal.

The draw was also ideal.  It was not too loose and not too tight – making the Toscanello Speciale what I term a “low maintenance” cigar to puff on.

Overall, I did not find the Toscanello Speciale to be a very powerful cigar.   I assessed this cigar as having its strength in the mild to medium range.  As for the depth of the flavors, they were also are subtle.  The Toscanello Speciale starts out mild to medium-bodied and by the second half it progresses nicely into the medium-bodied range.   For the most part the strength and body balance each other nicely, but by the second half the body has a slight edge.

The Toscanello is going to be a quick smoke – about 15 to 20 minutes, so if you don’t have a lot of time, this is a potential smoking option.  I definitely found the Toscanello Speciale to be a different cigar.  This goes from its appearance, to its blend composition, and to its flavor profile.   The Toscanello Speciale is going to provide more of a bitter flavor profile (again bitter does not mean harsh)  At the same time, it will provide just enough of that fire-cured smokiness to get a good sample of it.  The smokiness is not overpowering and it allows many of the other flavors to be recognizable.   The bitterness and smokiness will make this more of a niche type of smoke.  It is the kind of smoke you will either like or dislike.  Still I found this enough of an interesting smoke – and there was some nice history to it.  It’s one I might reach for from time to time.