It was in 2011 where Gurkha released the original Cellar Reserve cigar.  The cigar was one of three released that year that was targeted at brick and mortar retailers.  The selling point of this cigar is 15 year Dominican tobacco used in the filler.  Each Cellar Reserve contains a white colored band that resembles a wine label and packaged in a natural wood colored wine box.  The Limitada uses similar packaging, but contains a black wine label band and a black colored wine box. 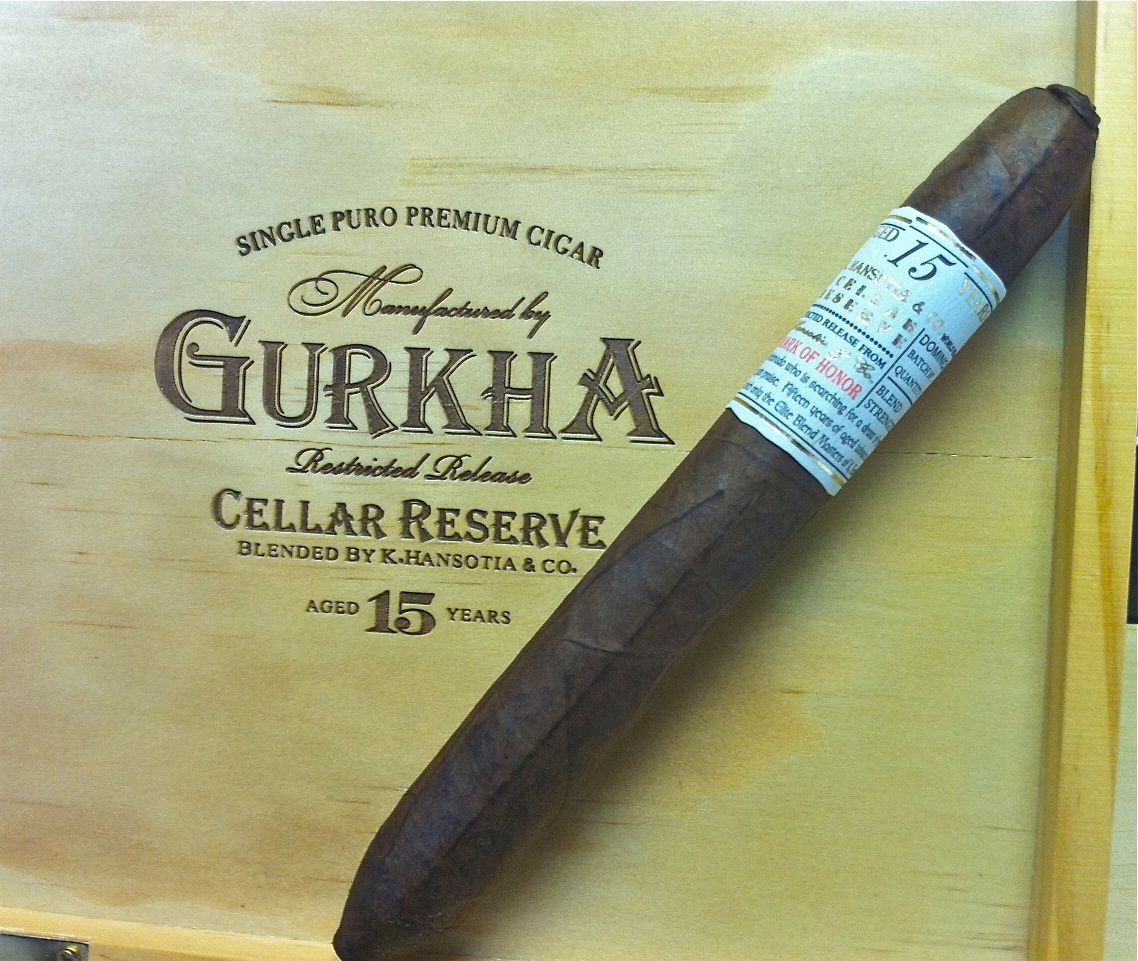 Without further ado, let’s take a closer look at the Gurkha Cellar Reserve Limitada and see what this cigar brings to the table.

The Cellar Reserve Limitada is only being launched in three sizes:

For this cigar experience I smoked the Solara which despite being 5 x 58 is the smallest cigar in the line.  The Brazilian Arapiraca wrapper has a rich chocolate color to it.   There is a slight amount of oil on the surface of the wrapper.  The wrapper has a slightly rugged look to it as there are plenty of visible veins and visible wrapper seams.  The ruggedness gives the Cellar Reserva Limitada some charm.  There is a spiral pig-tail at the cap and the perfecto tapers with a small fuse by the footer.

As mentioned, the band is a black version of the original cellar reserve band that also contains gold, red, and white font.   The band resembles a wine label.  A visual was provided above.

The start to the Gurkha Cellar Reserve Limitada provided a mix of earth and pepper spice. The pepper seemed to be more of a white pepper variety and I could also detect it prominently on the retro-hale. As the fuse turned to ash, some of the sweet chocolate notes I had detected on the pre-light surfaced with the pepper and earth.

Throughout the first third, the chocolate, pepper, and earth notes all alternated as a primary flavor. The chocolate seemed to have a slight edge during this phase of the smoking experience.

In the second third, the flavors still continued to move between the forefront and background. This time the earth notes seemed to have more of an edge.  This continued into the last third. There was a slight increase in pepper, but the Cellar Reserve Limitada never got overly spicy.  The resulting nub was soft to the touch. At certain times, it was slightly warm at the end.

A side note: There were four cigars smoked for this assessment. On two of the cigars, there was also a slight “must” flavor that is sometimes common to Brazlian Arapiraca cigars. The must seemed a little more prominent at the beginning. In the other two cigars, the must flavor was not present.

From a burn perspective the Cellar Reserve Limitada Solara performed well.  I was a bit concerned how a large ring gauge perfecto would perform, but the Solara size scored nicely  While the burn line had some slight jaggedness, it remained relatively straight throughout the cigar experience. The resulting ash was firm. The ash had a darker charcoal gray color with some black streaks in it. The burn rate and burn temperature were both ideal.

I was also concerned how this large ring perfecto would perform on the draw, but once again the Solara performed quite well.  The draw was not tight, and definitely not loose.  It was a low maintenance cigar to puff on and get flavor.

Gurkha has had both its fans and detractors, but I was quite impressed with the Cellar Reserve Limitada.  I had liked the original Cellar Reserve cigar quite a bit, but I found this cigar likable as well.  I was a little surprised because a Brazilian Arapiraca wrapper is not often my first wrapper of choice.  While I did detect some “mustiness” that I often find with this wrapper, it wasn’t too much of a problem here and it made for an enjoyable smoke.  While this wouldn’t be my first choice of a cigar to a novice, I certainly wouldn’t discourage one from trying this cigar.  I would also recommend this cigar to an experienced cigar enthusiast.  I would even encourage those who don’t like Gurkha and/or large ring gauges to give this one a try.  This cigar is worth a fiver in my book, and one I’d consider for a rotation cigar.