The Short Run series is meant to be exactly what the name implies – a limited production run cigar with a different blend each year.  For the most part, these releases have been one and done.  As mentioned the Short Run 2014 comes in three sizes with a production of 1,500 boxes of 24 per size.  This is the second Short Run series to be an offshoot of a core line.  In 2012, the E.P. Carrillo NWC Short Run 2012 was an offshoot of the E.P. Carrillo New Wave Connecticut (NWC) blend.

Without further ado, let’s take a look at the E.P. Carrillo INCH Short Run 2014 and see what this cigar brings to the table.

The INCH Core line offers blend with a Ecuadorian Sumatra (Natural) and Connecticut Broadleaf (Maduro) wrapper options.  As mentioned above, the INCH Short Run 2014 uses corojo tobacco – and in this case uses a Dominican Corojo 06 wrapper as well as a Nicaraguan Corojo 99 binder.

For this cigar experience, I smoked the No. 60 vitola.  The  E.P. Carrillo INCH Short Run 2014’s corojo wrapper has almost an oak-like color with a touch of colorado red to it.  Upon closer examination, there is some darker marbling that can be seen on the wrapper.  There is a slight amount of oil on the surface of the wrapper.  There are a few wrapper seams.  While there weren’t many visible veins, the surface of this wrapper was still bumpy – and even with the slight amount of oil, the wrapper still had a rugged feel.

The primary of band is the same band as used on the core line E.P. Carrillo INCH line.  This is highlighted by the golden “golden yellow ruler/tape measure look”.  There is a gold design that gives the effect of a “fastener” to wrapping the ruler around the cigar (see picture above)  The fastener has a gold circle that has “BY E.P. CARRILLO” etched around it.  Next to the he gold circle is the text “INCH” etched on it – also on a gold background.

There is a secondary band that sits below the primary band on the cigar.  This band is black with gold trim and gold font.  It says “Short Run” in a partial cursive font with “2014” flanked on each side.

Prior to lighting up the E.P. Carrillo INCH Short Run 2014 No. 60, I went with a straight cut to remove the cap.  After clipping the cap off, I moved on to the pre-light draw ritual.  The cold draw produced a mix of subtle corojo sweetness (something I consider to be a sweeter natural tobacco note) as well as subtle cream and floral notes.  I wouldn’t consider this the most exciting pre-light draw, but given I do not include the pre-light draw experience in the assessment or score, there was no loss of points here.  At this point, I was ready to light up the Short Run 2014 and see what the overall cigar experience would deliver.

As the INCH Short Run 2014 progressed into the second third, I found the corojo sweetness to continue to be a primary flavor.  The baker’s spice did increase somewhat, but again this was more of a sweet-spice and less of a peppery variety.  While I mention a lot of sweetness, this cigar does not produce an overpowering sweetness.  The background flavors of cream and nut helped ground some of this sweetness and provided some balance on the overall flavor profile. The nut flavors did diminish somewhat throughout the second third while the wood notes had now dissipated.

For the most part, this is the way the flavors held until the end.  In the last third, the baker’s spice did move up toward the forefront with the corojo natural flavors.  Toward the end, I did pick up a few harsh notes. The resulting nub was soft to the touch, but cool in temperature.

From a burn perspective, I did find the E.P. Carrillo Short Run 2014 did need some touch-ups along the way.  There were probably a few more touch-ups than I preferred, but overall the cigar never was in danger of canoeing or tunneling.  The resulting ash had a salt and pepper color. At times it was slightly loose.  The burn rate and burn temperature were ideal throughout the smoking experience. 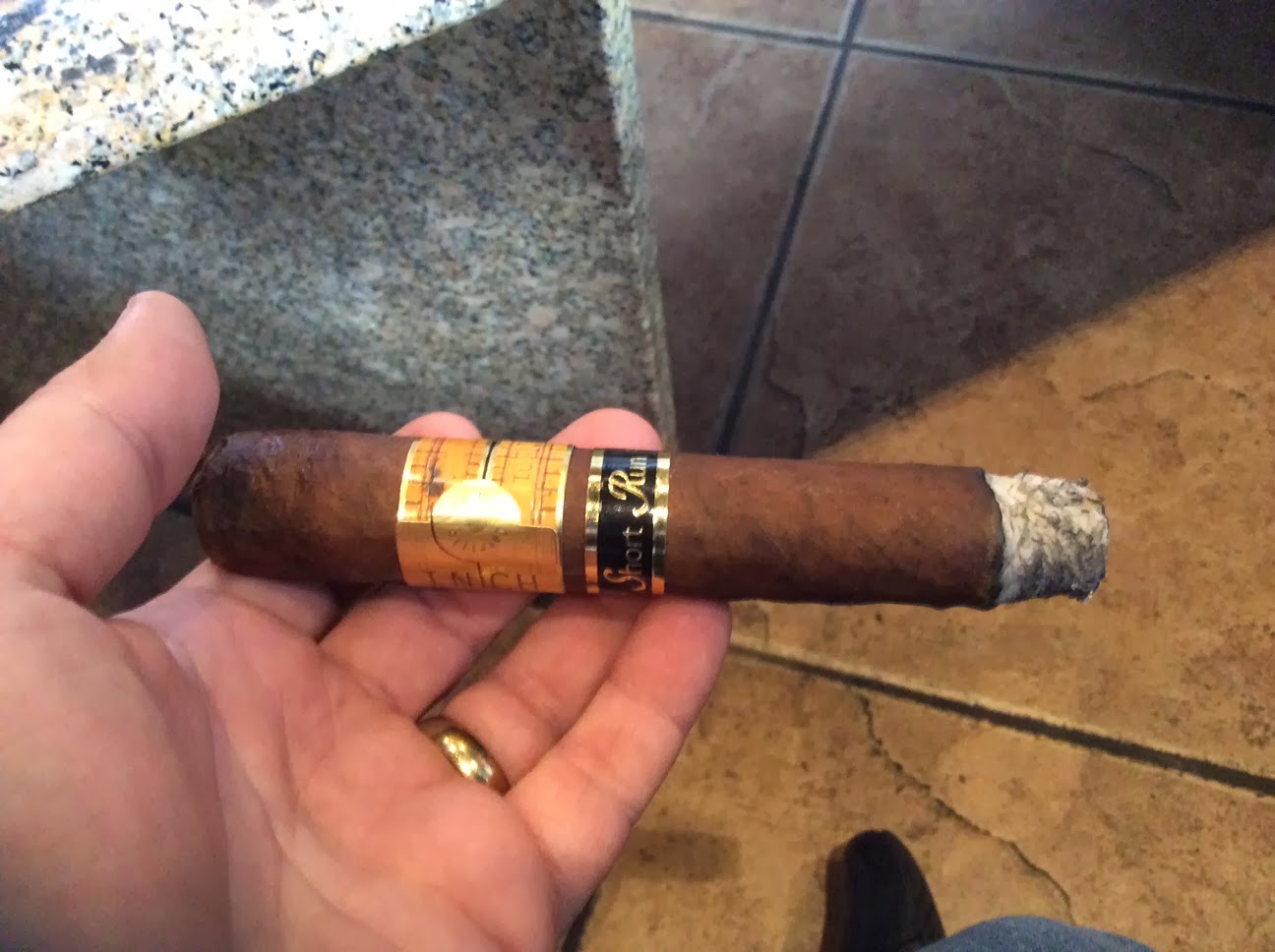 I did find the draw to perform very well.  If you like a large ring gauge with a little resistance (as I do), this is going to be a nice draw for you. I found the resistance was not too much – and worked in favor of not overdrawing a cigar with a big ring gauge.

The Short Run 2014 is not going to be a cigar that is going to throw up a lot in the way of strength. I assessed this cigar as medium strength from start to finish. As for the flavors, they pretty much also start out in the medium bodied range. Toward the second half, there was a slight increase in the weight of the flavors – and I felt it had crossed into medium to full-bodied range. When looking at strength versus body, these were even in the first half, but in the second half I felt the body took a slight edge over the strength.

For the past five years, the Short Run series has proven to be not only one of E.P. Carrillo’s best lines, but one of the iconic annual releases in the cigar industry.  No doubt this cigar is a change of pace from what has been previously released in this series.  The Short Run 2014 is a good cigar, but its up against some very tough competition of some of the best cigars the company has produced .  Many large ring gauge detractors will immediately blame the large size on why this release does not stack up against the others.  I don’t think that’s as much the issue as I just think the other releases had better flavors.  At the same time, while I’d say this is a cigar for the novice or experienced cigar enthusiast, it is for one that doesn’t mind the big ring gauge.  As for myself, I smoked the No. 60 and the No. 62, and the No. 60 would be the one I would go for. I am curious on how these will smoke 6 to 12 months from now.  The Short Run 2014 still has enough going on to keep five in the humidor as these will eventually be tough to come by.

* The E.P. Carrillo INCH Short Run 2014 was provided by E.P. Carrillo, but not used for this assessment.  Cigar Coop is appreciative for the sample, but this did not influence the review.