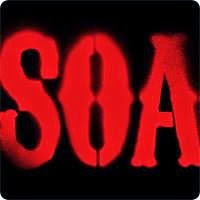 The Sons of Anarchy Clubhouse Edition KG-9 has been released in one size – a 6 x 52 toro.  The cigars will be packaged in 21 count boxes that resemble gun crates.

The Sons of Anarchy television series is currently in its seventh and final season. The show focuses around members of a motorcycle club based in the California Central Valley. One of the show’s central characters, Clay Morrow played by actor Ron Perlman is often seen smoking a cigar.

At a glance, here is a look at the Sons of Anarchy Clubhouse Edition KG-9  cigar:

As mentioned above, the Sons of Anarchy Clubhouse Edition has been released in one size – a 6 x 52 toro called KG-9.