The Pudgy Monsters series is the second sampler series based on Tatuaje’s Monsters Series – a line released on an annual basis that pays homage to a different monster / horror movie character. In 2012, the Tatuaje Little Monsters would be the first sampler series released – providing smaller and thinner versions of the original Monster Series releases. While there are two all new blends in the new Pudgy Monsters Series with the Tatuaje Chuck and Tatuaje Tiff; the remainder of the set provides another set of smaller monsters.  With these other Pudgy Monster cigars, for the most part they will have the same ring gauge as the original Monsters and same length as the Little Monsters. Tatuaje Frank is basically shorter version of the Tatuaje – The Frank and a thicker version of the Little Monsters’ Tatuaje Frank Jr..

The Pudgy Monsters series consists of 10 cigars. There is one cigar per blend that has previously been released in the Monsters series. The new blends, Chuck and Tiff contain two cigars.  2014’s Tatuaje Jekyll blend is not a part of the Pudgy Monsters release.  The cigars are made at the My Father factory by the Garcia family in Esteli, Nicaragua.

For completeness we include all of the blends based on The Frank.  These vitolas are also unique in that they are the only box-press shapes in the series.  The box-press is meant to represent Frankenstein’s squarish head.

As I normally do, I went with a straight cut to start things off.  Once the cap was clipped, I moved on to the pre-light draw.  The dry draw consisted of mocha, earth, pepper, and floral notes.  Overall I considered the pre-light draw of the Tatuaje Frank to be outstanding.  At this point I was ready to light up the Pudgy Monster Frank and see what the smoking phase would deliver.

The start of the Pudgy Monster Frank greeted me with a classic blast of Garcia pepper.  The pepper seemed to be a mix of red and white pepper early on.  The pepper was also quite prominent on the retro-hale with more of a red pepper quality.  The pepper settled down and notes of earth and mocha emerged.  I also picked up a nut flavor in the background.

As the Pudgy Monster Frank moved through the early stages, the mocha flavors had an espresso syrup-like quality to them (in my book, it means a little extra sweetness and a little extra weight on the palate).  The earth and pepper notes joined the nut flavors in the background.  The pepper still had a lingering effect on the tongue and was prominent on the retro-hale.

By the end of the first third, the espresso syrup-like quality diminished somewhat, but the mocha notes remained in the forefront.  Meanwhile the earth, nut, and pepper notes remained secondary.  By now the pepper seemed to be more of a red pepper taste on the tongue. This flavor pattern continued through the second third.

The pepper spice increased in the second half and by the start of the final third, they moved into the forefront.  I found the spice really kicked in during the final stages.  I could still detect the mocha notes, but the spice was really in control.  At the same time, there was no harshness to this spice.  This is the way the flavor profile remained until the end of the cigar.  The resulting nub was outstanding – firm to the touch and cool in temperature.

The burn was excellent on the Frank.  This was a pretty much a straight burn from start to finish requiring minimal touch-ups.  The resulting ash was a salt and pepper color.  The ash itself was on the tight side and came off the cigar in clean chunks.  There were a couple of instances of minor flaking, but nothing I would consider out of the norm.  The burn rate and burn temperature were ideal. 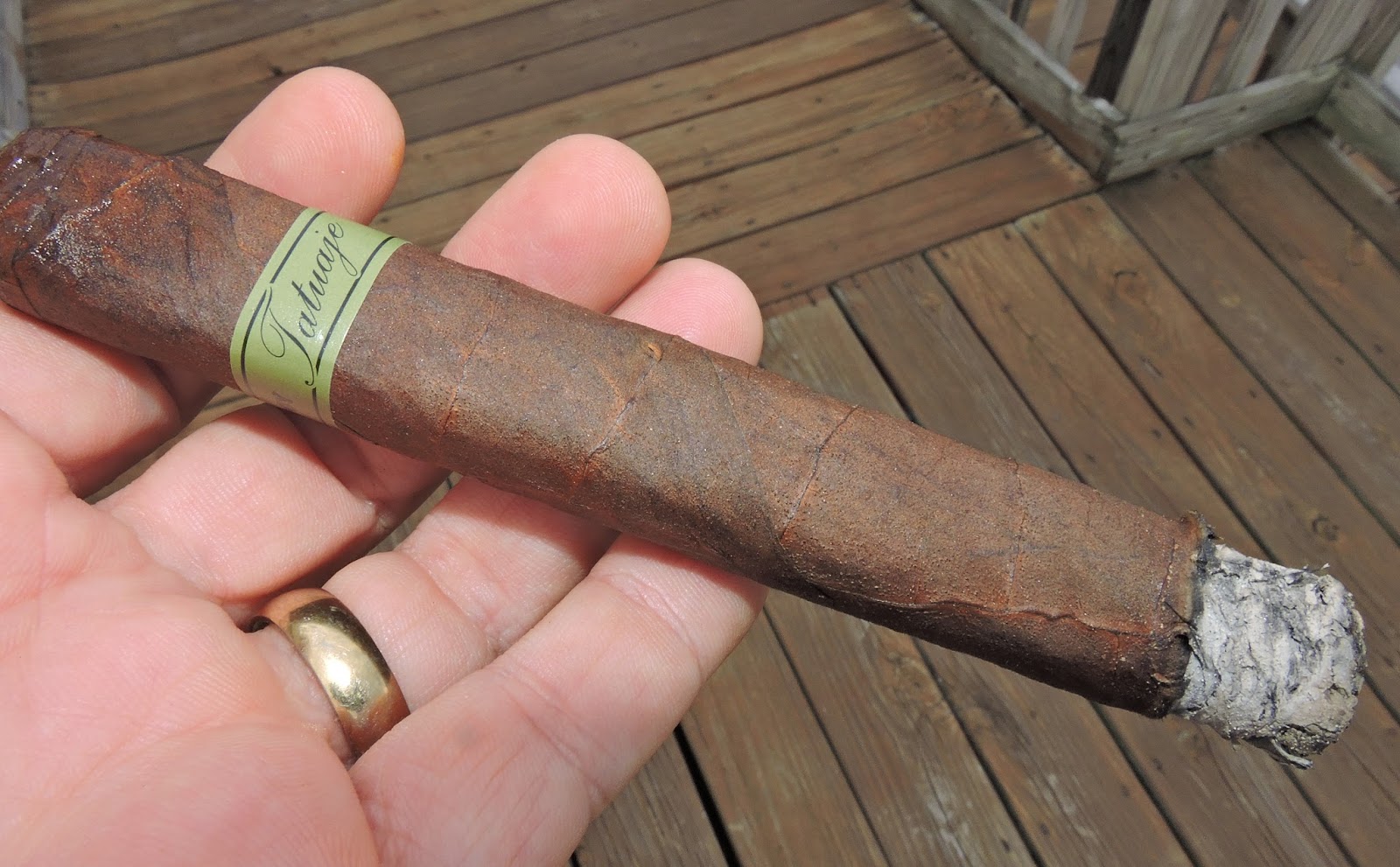 The draw was excellent on the Pudgy Monster Frank. This was a draw that was not too loose, nor not too tight.  This made the Frank an enjoyable and low maintenance smoke from start to finish.

I have never smoked the original Tatuaje – The Frank cigar.  I have now smoked several of the Frank Jr. and the Pudgy Monster Frank cigars.  While I have not smoked that original “The Frank”, I can say that the Little Monster and Pudgy Monster incarnations have really impressed me. I did find a little less complexity on the Pudgy Frank, but the flavors delivered were still outstanding.  I have also found the Frank Jr. to be a blend that aged very well.  The Pudgy Monster Frank is ready to smoke now. It easily wins as the “belle of the ball” for the Pudgy Monsters series – meaning hands down the best cigar in the sampler.   The great news is that it will even get better.

Given this is a stronger and fuller cigar, I would recommend the Pudgy Monster Frank to a more experienced cigar enthusiast.  As for myself, this was an outstanding cigar – and one that is box worthy now and potential to go Chuck Norris or Oasis level.