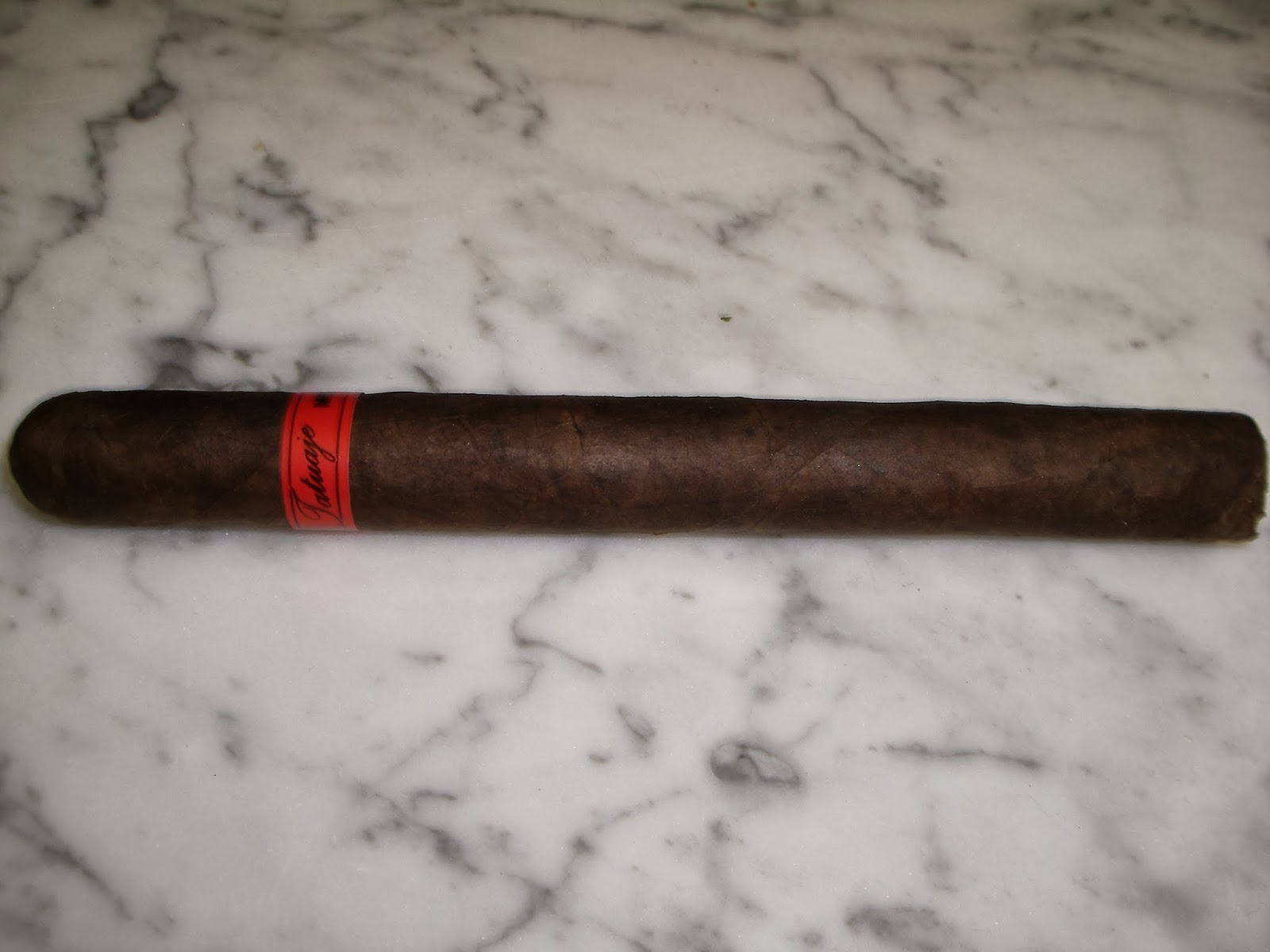 The Tatuaje Monster No. 6 JV13 marks the sixth release of Tatuaje’s Monster Series.This annual release series was created by Tatuaje founder Pete Johnson as a tribute to monster and horror movies.  Every year since 2008, cigar enthusiasts have anxiously look forward to the release of this cigar and seek to procure a box.  Each release of the Monster Series is a different blend in a different size.  A single batch is produced and once the cigars are gone – they are gone.  For 2013, the JV13 represents the character of Jason Voorhees from Friday the 13th.  With this particular cigar, Johnson returns to using a Connecticut Broadleaf wrapper – something that he has set the bar very high for with his releases across his portfolio.  With the case of the JV13, this is a good cigar, however it might be a cigar when compared to much of Johnson’s other work fall on the short side.

The announcement of each release of the Monster Series sets off a frenzy by cigar consumers. Much of the frenzy for this release focuses on what has been termed the “dress boxes”. The dress boxes are a custom designed box that fits the theme of the Monster release.  Last year, the Monster release was the Tatuaje Mummy which had a sarcophagus box.  This year, the Tatuaje JV13 has a hockey mask style box as its dress box.  Tatuaje produced 666 boxes of the sarcophagus box and it was released to 13 “unlucky” retailers.  Like in previous years (in order to accommodate additional demand), plain boxes were also released to Tatuaje authorized retailers. The production for 2013 of the JV13 plain boxes is 4500 boxes (of ten).  This makes the JV13 the largest production to date of the Monster Series.

Without further ado, let’s take a closer look at the Tatuaje Monster No. 6 JV13 and see what this cigar brings to the table.

As mentioned above, Johnson returned to using Connecticut Broadleaf for this installment of the Monster Series.  The other installment to use this wrapper is the Tatuaje Frank.

The Tatuaje JV13’s Connecticut Broadleaf wrapper has a dark roasted coffee bean color.  Upon closer examination there is some darker marbling that can be seen on the surface.  There is a slight amount of oil on the surface, but in general I think the complexion of the wrapper has silky look to it.  There are some visible veins, but the dark wrapper does a good job at hiding the wrapper seams.

Prior to lighting up my Tatuaje JV13, I went with a straight cut to remove the cap.  After successfully removing the cap, I proceeded with the pre-light draw.  The cold draw provided me notes of coffee, earth, and some pepper spice.  Overall I considered the pre-light draw to the JV13 to be satisfactory.  At this point, I was ready to light up the JV13 and see what the smoking phase would have in store.

The start to the JV13 had some notes of earth, pepper, and must.  There also was a slight background note of coffee.  The must notes seemed more prominent in the early stages of the smoke.   By about the ten percent mark, the earth and pepper notes became the primary flavors. The coffee notes had changed to more of a chocolate note that had a slight bitter quality.  The must flavors were now more distant.  Meanwhile, on the retro-hale I was also detecting pepper, but it had more of a grassy quality.

By the later part of the first third, the chocolate, earth, and pepper notes were all on par.  What I noticed on some of the smokes of the JV13 I sampled is that the chocolate did get sweeter and richer, but on other smokes it had this bitter (not bittersweet) quality.  Meanwhile there still was still a slightly musty note in the background.

In the middle of the second third, the chocolate changed up to more of a chicory flavor.  The chicory receded into the background and the earth and pepper notes remained in the forefront. The musty notes had dissipated by this time. For the most part, I found this was the way the JV13 remained until the end.  The resulting nub was cool in temperature and firm to the touch.

In terms of the burn, this cigar performs as good as any Tatuaje cigar I’ve had. Keeping the burn line straight was a low maintenance task as the JV13 required minimal touch-ups along the way. The resulting ash was tight with a bright white color.  The burn rate and burn temperature were both ideal – especially for a long cigar.

I also found the draw ideal.  There was a touch of resistance on the draw – which is something I like.  This made for an enjoyable cigar experience.

One thing I have noticed about the JV13 is that it’s strength really sneaks up on you.  Several times I’ve gotten fooled once the cigar reaches the second half as the strength level got pretty high.  The JV13 will start out in the medium to full range – which I consider ideal.  By the second half, the JV13 is operating at full strength – and with a good 3 inches to go with the smoke, it stays that way right until the end.  The depth of the flavors follow closely as well.  They start out medium to full-bodied and progress to full-bodied in the second half where it stays like that until the end.  Mostly the JV13 maintains a good balance between strength and body in the first half, but in the second half it is the strength that is in control.  I’m curious to see what the long-term effect on aging will be with this cigar.

There are two general observations I can make about this cigar.  The first is that it was not consistent in terms of the flavors it delivered.  In some instances, I thought the cigar had more sweetness and other times more bitterness.  The second is that this is going to be a Connecticut Broadleaf cigar that is going to have more of a rough and gritty feel to it and not one which will provide a “smooth smoke”.  Johnson has proven to be a master when it comes to releasing Connecticut Broadleaf cigars.  While the JV13 is a good cigar, it didn’t wow me.  I really had a tough time putting this one up against any other of his Connecticut Broadleaf releases.  In other words, there are plenty of other Connecticut Broadleaf cigars in the Tatuaje portfolio I would choose over the JV13.  Given this cigar has some strength in the second half, it is one I am going to skew more toward the seasoned cigar enthusiast.  As for myself,  I still would smoke this again.  As I mentioned, this is a cigar I’m curious to see how long term aging impacts this – namely I’m wondering if it smooths out this cigar.  This is still a cigar I’d encourage a “try one” on.