Without further ado, let’s take a closer look a the Sindicato Maduro in the Toro format and see what this cigar brings to the able.

The Mexican Marron wrapper is sourced from the Alberto and Alejandro Turrent’s farms in the San Andres region of Mexico.  The remainder of the blend is Nicaraguan tobacco.

The Sindicato is being launched in four sizes. Each of the sizes is a box-press. The cigars are packaged 16 per box.  This same sizes are also found in the Sindicato Natural line, however that line also has two additional vitolas (a Corona Gorda and a Belicoso)

The Sindicato Maduro Toro’s Marron wrapper has a deep mocha color to it.  There is a light coating of oil on the wrapper.  There are some visible veins, but the wrapper’s dark color does a good job at hiding the wrapper seams.  The box-press itself is quite firm with no soft spots.  The cap is finished with a coiled pig-tail while the footer of the cigar is covered.

The band to the Sindicato Maduro is quite similar to the one on the Sindicato Natural.  The band is mostly black, gold, and silver and for the most part the gold and silver are inversed on the Maduro from the Natural. The band is highlighted by a large black shield with gold trim on the front of the band. The text “SINDICATO” is in large silver colored font on the shield. Just below that text is the text “Sabor Evolucionando” (which translates to “evolving taste”) in silver cursive font. Toward the lower part of the shield is the text “HECHO A MANO” in gold font. There is thick silver trim toward the bottom of the band and features the text “MADURO” in small black font.

Prior to lighting up my Sindicato Maduro Toro, I went with a straight cut to remove the cap as opposed to pulling off the pig-tail.  Once the cap was removed, I moved on to the pre-light draw. The dry draw provided notes of earth, chocolate, some maduro sweetness, and a mild spice. Overall I considered the pre-light draw of the Sindicato Maduro Toro to be outstanding. At this point I was ready to light up this cigar and see what the overall smoking experience would bring to the table.

The Sindicato Maduro Toro started with a blast of spice that was a combination of black pepper and cedar notes.  As the spice subsided, notes of coffee and natural maduro sweetness (a cross of natural tobacco and cherry) emerged.  The coffee and maduro sweetness became primary flavors.  The spice became a close secondary note.  There was also a slight creamy undertone in the most distant background.  Meanwhile I detected black pepper on the retro-hale.

Toward the end of the first third the combination of the coffee and maduro sweetness morphed into more of a mocha flavor.  While the spice was a secondary flavor, it did have a nice (but not overwhelming) lingering effect on the tongue.

By the midpoint, the spice started to take on more cedar characteristics. There still was also a slight sweetness to these cedar notes. The cedar notes increased and shortly before the 2/3 point, it would join the mocha notes as a primary flavor. The pepper wasn’t totally gone and was still present on the retro-hale.

By the final third, the cedar notes moved firmly in control while the mocha notes became secondary. Much of the creaminess of this cigar was now gone, but it still was quite flavorful. The spice component never got overwhelming. This is the way the flavor profile remained until the end. The resulting nub was firm to the touch and cool in temperature.

The burn performed quite well on the Sindicato Maduro Toro.  Overall, the burn remained on the straight side.  There was a slight curvature on the burn line itself, but this cigar never got off track and was never in danger of tunneling or canoeing.  The ash was white in color and on the firm side.  While there was some very minor flaking, there was nothing I would consider out of the ordinary.  The burn rate and burn temperature were both ideal. 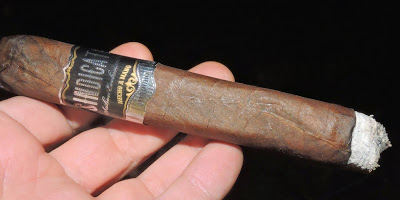 The draw performed excellent as well.  It was not too tight, nor too loose.  This was a low maintenance cigar to derive flavor from.

Back when I assessed the original Sindicato Natural,  I thought the company hit gold with that blend. With the Sindicato Maduro, I found a cigar that was even better.  I’ve been one of the bigger critics of Mexican wrapper because I feel it can overpower a blend. When it comes to Ramos and the team at Casa Fernandez, they are masters at producing a blend with this wrapper.  This is a not a wrapper that will overwhelm the rest of the blend.

This is a cigar I would probably steer to a more seasoned cigar enthusiast.  As for myself, this cigar is  an excellent cigar, and easily worth a box split.