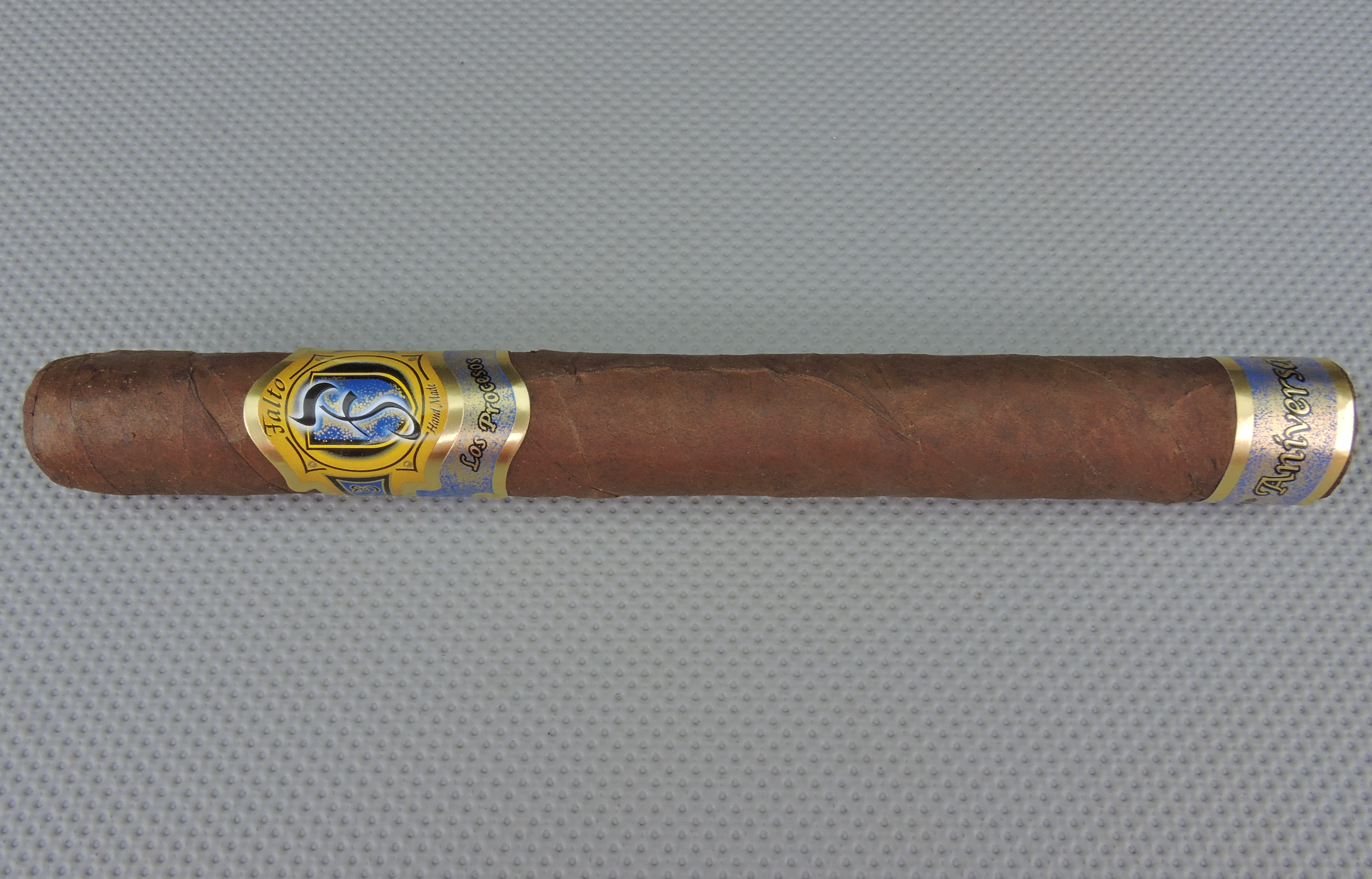 As the name indicates, the Falto 20th Aniversario Los Procesos is a cigar that commemorates the twenty years in the cigar business by Tabacalera Falto founder Luis Falto. Back in 1995, as a college student at George Washington University, Luis Falto started selling cigars. He eventually decided he wanted to make his own cigars that reflected his personal profile. This took Falto to the Dominican Republic where he met up with Manuel Inoa of the La Aurora factory. Falto’s vision was to develop small batch cigars with tobaccos he could personally choose and toreadors he could get to know on a personal basis. Inoa and La Aurora connected on this vision and thus the Tabacalera Falto company was born. Today we take a look at the latest project of the Falto / La Aurora combination, the Falto 20th Aniversario Los Procesos.  Overall this is probably a fuller and stronger cigar than many Falto cigar enthusiasts are used to, but it delivers a cigar completely worthy of being a 20th anniversary cigar.

Falto Cigars’ embraces a true “one size, one blend” model. There are sixteen blends listed on the company’s web-site. Each blend is made in only one size – and for the most part the sizes are different.  The Falto 20th Aniversario Los Procesos is a Double Corona measuring 7 x 50 – the first Double Corona in the portfolio.

As for the name Los Procesos it translates from Spanish meaning “The Processes”.  The name is used to pay homage to all of the processes a tobacco leaf undergoes from seed until it’s in the consumer’s hand cigar – including the processes of lighting a cigar, tasting a cigar, and enjoying a cigar.

Without further ado, let’s take a closer look at the Falto 20th Aniversario Los Procesos and see what this cigar brings to the table.

There are a couple of tobaccos worth noting that are not seen too often because they are considered more difficult to blend with – namely Carbonell as a part of the double binder and Negrito Canca in the filler.  These are not completely unknown tobaccos – Carbonell and Negrito have recently surfaced on such releases as Caldwell Cigar Company’s The Last Tsar and The King is Dead respectively.

There also is an “off the radar” tobacco called 20/20.  This is a Cuban Hybrid seed grown in the Dominican Republic by Leo Reyes.

As mentioned, the Falto 20th Aniversario Los Procesos is available in one size – a 7 x 50 Double Corona.  The cigars are packaged in 20 count boxes.  Each box has four trays of five cigars.

The Ecuadorian Havana wrapper of the Falto 20th Aniversario has chocolate brown color.  The wrapper had a smooth look with a light coating of oil on the surface.  There are some visible veins. As for the wrapper seams, there are also a few visible ones.

There is a secondary band on the footer featuring the blue and gold spray paint styled background.  The text “20th Aniversario” is in gold font with dark trim.  There is also gold trim on the top and bottom of the footer band.

Prior to lighting Falto 20th Aniversario Los Procesos, I went with a straight cut to remove the cap.  Once the cap was clipped, I moved on to the pre-light draw.  The dry draw provided a mix of woody and unsweetened cocoa notes.  Overall I didn’t consider this to be the most exciting pre-light draw, but it wasn’t a bad one either.  Since the pre-light draw is not part of the final assessment rating and score, there was no loss of points here.  At this point I removed the footer band, lit up the Falto 20th Aniversario and awaited what the smoking phase would have in store.

The start to the Falto 20th Aniversario Los Procesos had a mix of cocoa, white pepper and wood notes. As the flavor profile settled in, the cocoa notes moved to the forefront and became quite smooth.  Meanwhile, the spices and wood moved to the background.  The wood notes quickly morphed to a earth notes while the spices expanded to a combination of red and white pepper.  I also picked up an additional layer of these spices on the retro-hale.

Later in the second third, I found the spices joined the earth notes in the forefront.  The cocoa notes moved into the background.  I still picked up some of the grass notes in the distant background.  I found this flavor profile remained constant into the last third and pretty much continued until the end of the cigar.  While there were some spices in the forefront, there was no harshness whatsoever.  The resulting nub was excellent – firm to the touch and cool in temperature.

Overall the Falto 20th Aniversario performed excellent when it came to the burn.  The burn path remained straight from start to finish.  There was some curvature and a slight jaggedness on the burn line, but this didn’t prove to be problem-some and nothing a lighter couldn’t easily fix. The resulting ash was firm with a salt and pepper color.  The burn rate and burn temperature were ideal. 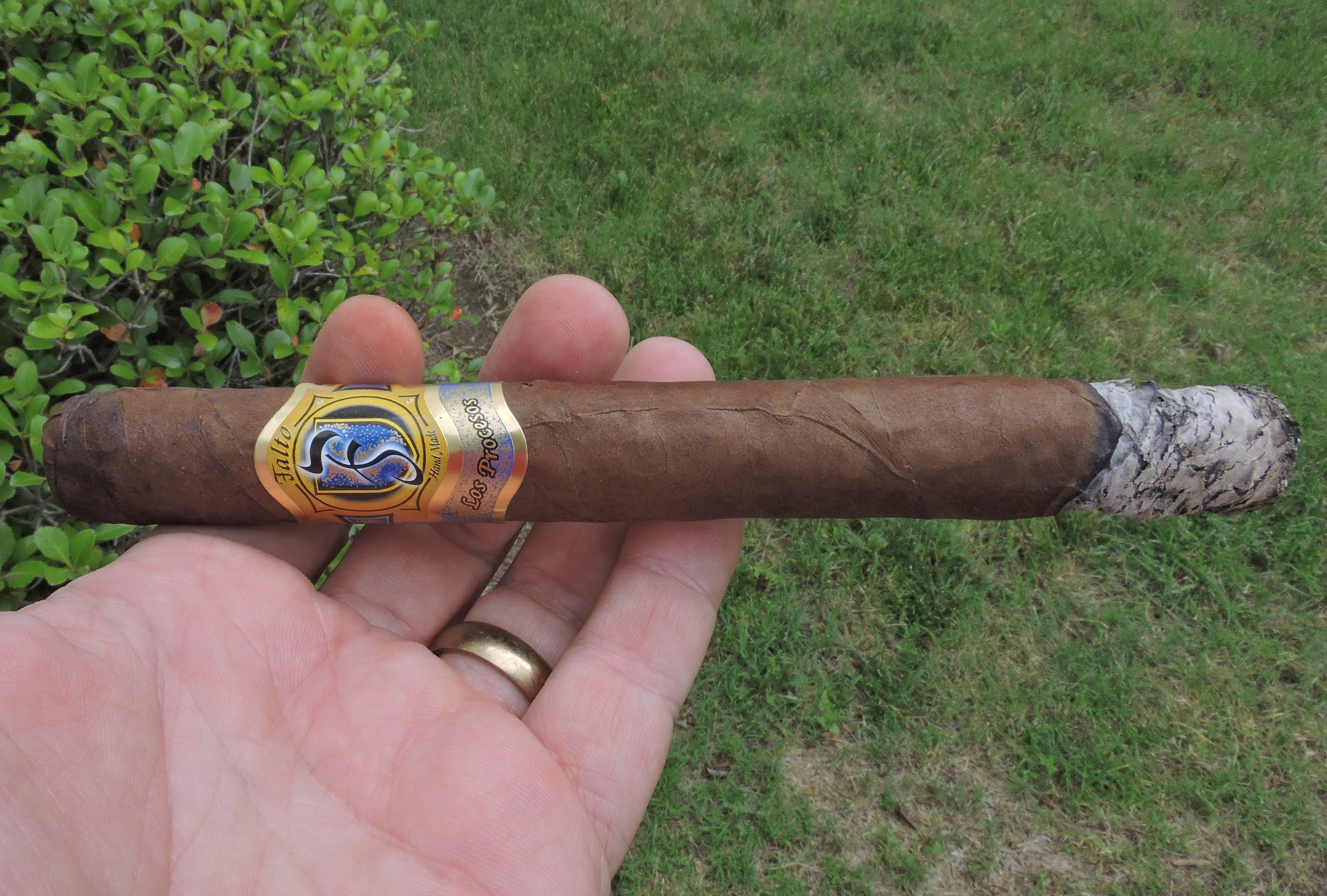 The draw proved to be excellent.  It wasn’t too tight, nor too loose, nor too open.  This was a low maintenance cigar to puff on and enjoy the flavors of this cigar.

As mentioned at the start of this assessment, the Falto 20th Aniversario is a stronger and fuller offering in the Falto line.   The strength is going to start out at a medium level.  This cigar linearly increased in strength.  By the end of the first third, the strength moved to medium to full.  Entering the last third, the strength was at a full level – definitely providing some pop.

Meanwhile the body of the cigar also started out medium, but increased a little more rapidly early on.  By the middle of the first third, the Falto 20th Aniversario wass delivering medium to full-bodied flavors.  By the midway point, the notes were full-bodied.

For the most part, the strength and body are pretty close.  There was a slight edge to the body early on, but the attributes come close by the later part of the second third.

In my opinion, the Falto Anivesario 20th Aniversario Los Procesos is the best cigar produced by Falto to date – and there are some excellent offerings in the portfolio.  While the spices increase as the cigar goes along, the cigar never loses its smoothness.  I also loved the way both the strength and body progressed along the way.  The flavors are not radically different, but there were some intangible qualities the way these flavors all came together.  I would definitely say this is not a cigar for a novice cigar enthusiast.  As for myself, this is certainly a cigar I would smoke again – and it’s easily a box worthy selection.

Note: These cigars are available from site sponsor, Havana Cigar Club. Havana Cigar Club is also the only official Falto lounge.  You can call them at 401-287-4250 and be sure to mention Cigar Coop and Stogie Geeks.