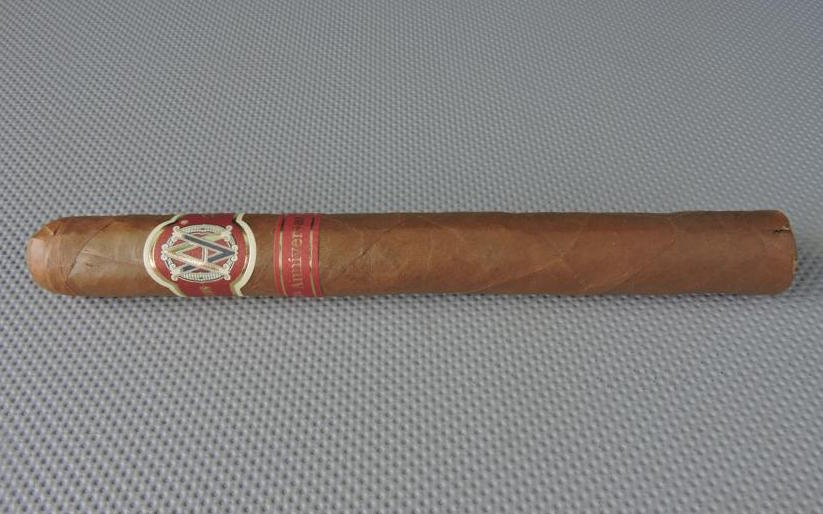 Fourteen years ago, Avo Cigars released a special limited edition cigar for brand ambassador Avo Uvezian’s 75th birthday on March 22, 2001 appropriately titled the Avo 75th Anniversary.  Since then, a limited edition cigar would follow each subsequent year for Uvezian’s birthday (until this year when the Avo Limited Edition 2015 moved away from being a birthday cigar).  Today we take a look at the Avo 75th Annivesary that was included in the recently released Avo’s Greatest Hits Sampler. Overall, I found this to be an outstanding release – and one that should not be overlooked in the long history of this annual release series.

The Avo 75th Anniversary was released in one size – a 7 x 50 Double Corona.  Eventually, the blend would become the basis for a regular production line called the Avo Signature. The Avo Signature would bring back the Double Corona size and introduce several other sizes.  However, this year as a part of the rebranding of the Avo Cigars, the Avo Signature line has been discontinued.

With each subsequent year following the Avo 75th Anniversary, a different limited production release is done in a different size and a different blend. Last year, a commemorative sampler called “Avo’s Greatest Hits” was announced just before the 2014 IPCPR Trade Show. The sampler contains 14 of the limited edition cigars between 2001 and 2014.

In terms of the cigars included in the Avo’s Greatest Hits, some are cigars that have been aging in the and some have had their blends reconstructed using the same tobaccos (The LE05 was not included because this the reconstruction of the blend could not be done to Master Blender Henke Kelner’s satisfaction). It has not been disclosed whether or not the Avo 75th Anniversary is from 2001, or if it has been reconstructed.

Since late last year, we have been assessing the cigars included in Avo’s Greatest Hits. Most of the cigars in this series “Assessment Update” (aka Agile Cigar Review) formats. Since the Avo 75th Anniversary has not been assessed yet, we used the full assessment format here.

The Avo 75th features an Ecuadorian wrapper over Dominican binder and filler.

The Avo 75th Anniversary was released in one size, a 7 x 50 Double Corona.  As mentioned, the subsequent Avo Signature line would introduce other sizes.

The Ecuadorian Sun Grown wrapper is medium brown with a light rosado hue to it.  The wrapper itself has a thin coating of oil on the surface.  There are some some visible veins on the surface.  The wrapper seams are also visible, but they are on the thin side.  There was a slight crack in the wrapper by the footer, but this did not extend into the binder and didn’t cause any problems during the smoking experience.

The secondary band is red with the text “75th Anniversary” in gold font. There is a gold pinstripe across the top and bottom of the band.

Prior to lighting up the Avo 75th Anniversary, I went with my usual choice of a straight cut. Once the cap was successfully removed, I moved on to the pre-light draw experience. The cold draw of the cigar delivered a mix of grass and natural tobacco. There was also a touch of caramel sweetness and slight cedar spice. Overall I considered this to be a very good pre-light draw. At this point, I was ready to light up the Avo 75th Anniversary and see what the cigar experience would have in store.

The Avo 75th Anniversary started out with notes of sweet natural tobacco and coffee. There were also some notes of black pepper and classic Davidoff grassy notes in the background. In the early stages, a creamy note evolved that smoothed out the flavor profile. Meanwhile on the retro-hale, there was a combination of herbal and white pepper spices.

By the last third, the grassy notes remained in the forefront, but were now joined by the pepper notes. The cream notes now joined the coffee and natural tobacco in the background. These background notes kept the flavor profile very interesting right until the end of the cigar. The end of the cigar remained flavorful with no harshness. The resulting nub was firm to the touch and cool in temperature.

Overall the burn of the Avo 75th Anniversary performed well. It wasn’t a perfect burn, but it wasn’t a high maintenance one either. There was a slight curvature on the burn path, but the cigar was never in danger of tunneling or canoeing. The burn line itself did not have much in the way of jaggedness. The resulting ash was not overly firm, but not loose either. The ash had a salt and pepper color to it. The burn rate and burn temperature were ideal. As mentioned the crack by the footer did not seem to have any adverse effects. 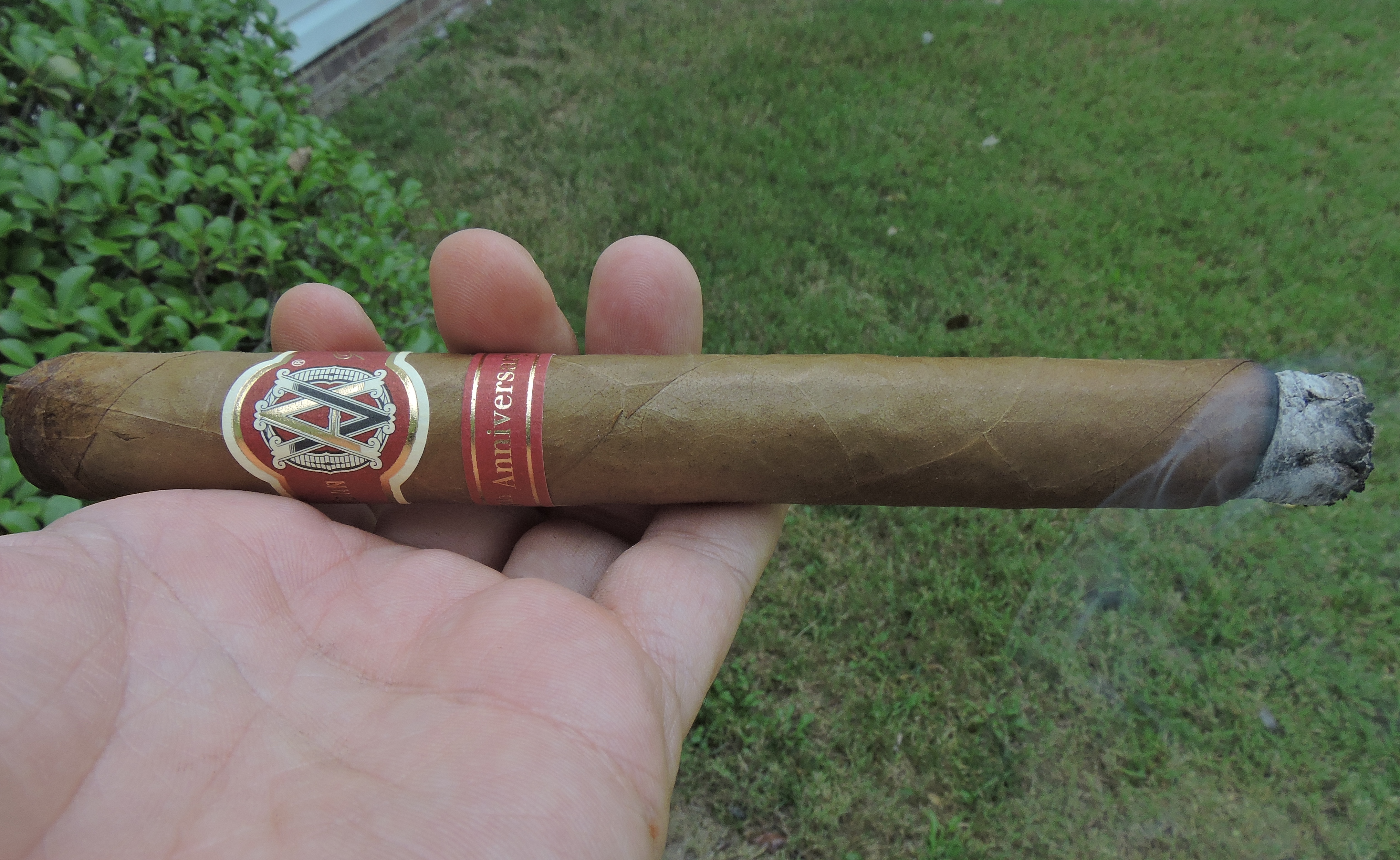 The draw of the Avo 75th Anniversary scored nicely too. It was not a loose draw, but not a tight one either. The cigar itself produced a nice amount of smoke.

In terms of the strength and body of the Avo 75th Anniversary, I found the majority of the smoking experience to be in the comfort zone of what I would expect from an Avo Cigar. The strength of the Avo 75th Anniversary remained in the medium range from start to finish. As for the body, I found the Avo 75th started out in the medium range. I did find an increase in body later in the cigar and assessed this as medium to full-bodied for the last third. For the most part the strength and body balanced each other nicely, but toward the end, the increase in body did give it an edge.

There are two things I have liked about the Avo Greatest Hits sampler. It has given me a chance to revisit some old favorites that have been more difficult to obtain. At the same time, it has given me an opportunity to smoke installments of this series for the first time. The Avo 75th Anniversary is a bit of anomaly in this series. I had never installed the original Avo 75th, but I have smoked the Avo Signature which is based on this blend. While I don’t have an exact answer, my guess is that this Avo 75th is not an original one from 2001. I can definitively say that this particular Avo 75th Anniversary in the Avo’s Greatest Hits sampler was quite good. It’s a cigar I’d recommend to a novice or experienced cigar enthusiast. It’s one that I would recommend to an Avo fan. As for myself, it’s one I’d smoke again and it’s easily worthy of a box purchase if on its own.