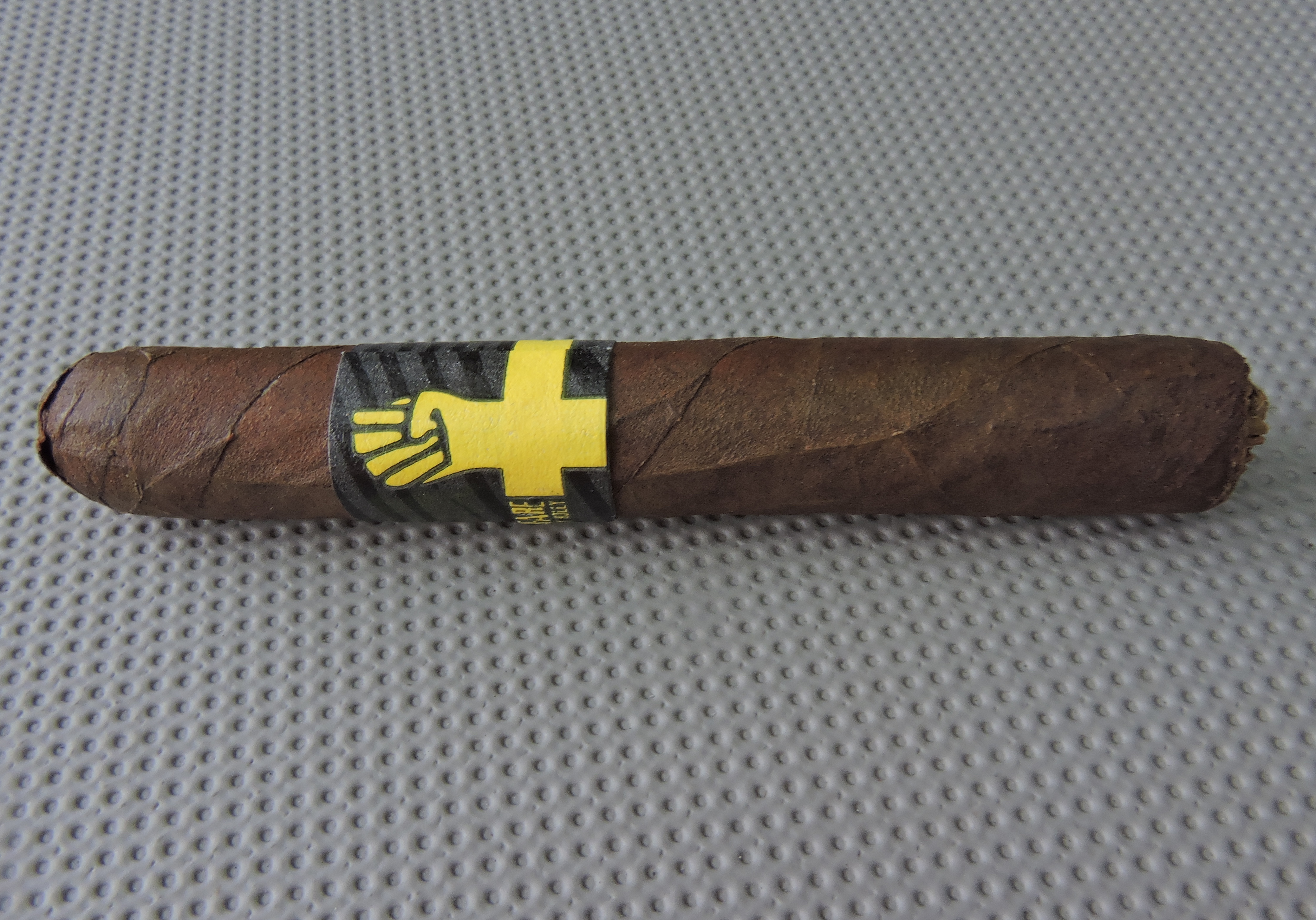 The Viva Republica Advanced Warfare is a new blend that extends the company’s Guerrilla Warfare line. If you watched Episode 137 of Stogie Geeks, Viva Republica owner Jason Holly first revealed details about this project. At the 2015 IPCPR Trade Show, the Advanced Warfare made its official debut. Advanced Warfare takes a little bit of a different spin when it comes to adding a new blend to an existing line. While it is popular to start with an existing blend and change up the wrapper, Holly goes in the opposite direction. For Advanced Warfare, he keeps the Ecuadorian Sumatra wrapper found on Guerrilla Warfare and changes up the binder and filler.  Recently, I’ve had an opportunity to smoke the Advanced Warfare in the Petit (4 x 41 size). With this cigar, Holly knocks it out of the park – delivering a powerful and flavorful smoke at an affordable price.

Viva Republica made its debut in 2012 with the launch of its Rapture line. The company works with the La Aurora factory in the Dominican Republic to make its cigars. La Aurora Cigars is distributed by Miami Cigar and Company. In 2014, Holly entered into an agreement to have Miami Cigar and Company to distribute Viva Republica products in the U.S. market.

Without further ado, let’s break down the Viva Republica Advanced Warfare Petit and see what this cigar brings to the table:

The Advanced Warfare comes in the same regular production sizes as the Guerrilla Warfare. The cigar comes in 50 count boxes.

The Ecuadorian Sumatra wrapper to the Advanced Warfare Petit has a milk chocolate color to it. Depending on how the light shines on it, it may demonstrate some colorado red to it. There is a light coating of oil on the wrapper. While there are well hidden wrapper seams, and minimally visible veins, the wrapper itself has a rugged and bumpy look to it.

The band is a variation of the original Guerrilla Warfare logo. The band features a yellow Viva Republica logo which is a fist over a cross on a black and gray camouflage background. To the left of the logo is the text “ADVANCED WARFARE” in yellow. Just below that text is the text “UN PROYECTO ESPECIAL DE LEÓN” in a smaller yellow font. On a yellow stripe connected to the logo is the text “VIVA REPUBLICA” in black font.

Preparation to the Cigar Experience

Prior to lighting up my Advanced Warfare Petit, I went with my usual choice of a straight cut. After clipping the cap, I moved on to the pre-light draw phase. The dry draw notes delivered a nice cocoa sweetness along with a light floral spice. While it wasn’t the most complex pre-light draw, it was quite satisfying. At this point I was ready to light up my Advanced Warfare Petit and see what the smoking experience would have in store.

During the first third, a fruit sweetness emerged in the background. Later in the first third, I found the fruit sweetness to increase. The fruit and cocoa notes alternated as the dominant primary note. Meanwhile there was gritty earth note that also surfaced in the background that gave this cigar a real tobacco feel. This earth note was countered nicely by a slight cream note which seemed to prevent the cigar from having a “rough” taste to it.

Later in second third, the earth and pepper notes began to move toward the forefront. By the last third, I found these notes in the forefront with the cocoa and fruit notes moving into the background. The spice and earth dominated the last third, but never got overwhelming. This is the way the cigar experience came to a close. The resulting nub was firm to the touch and cool in temperature.

The burn of the Advanced Warfare Petit performed quite well. The burn path remained relatively straight from start to finish. There was some jaggedness on the burn line, but this was easily remedied with some lighter touch-ups – and the cigar itself never was in danger of tunneling or canoeing. The resulting ash had a light silvery gray color. The ash was quite firm and came off the cigar in clean chunks. The burn rate and burn temperature were both ideal. 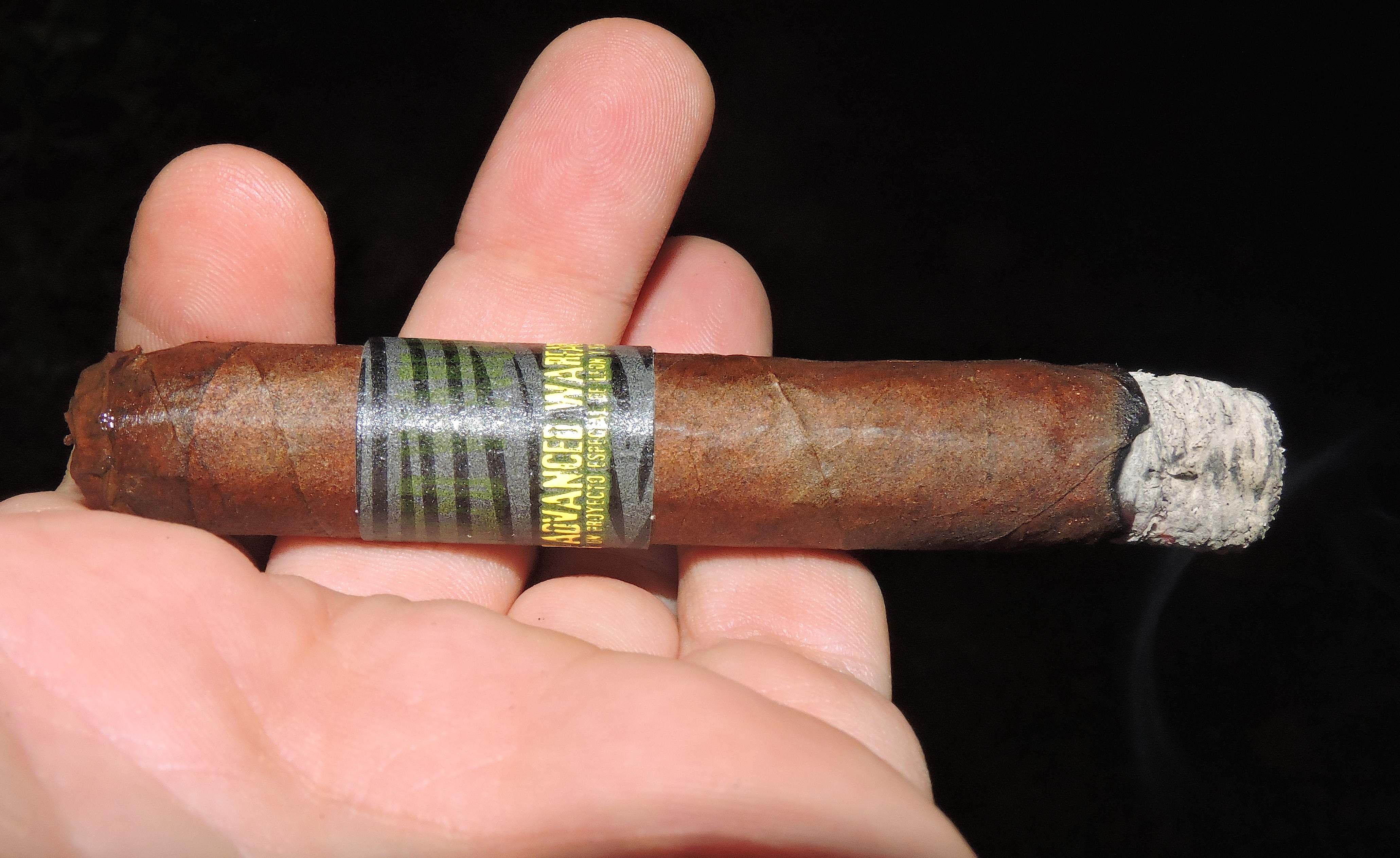 Holly told us at IPCPR that this was a powerful smoke – and this is exactly what the Advanced Warfare Petit delivered. It wasn’t the strongest cigar in terms of nicotine content I had this year, nor was it the most full-bodied smoke I had. However, this still very much was a cigar that was full in strength and body. In particular the retro-hale added quite a bit of kick to both attributes. The strength is something that will sneak up on you. Overall I found the strength and body to balance each other nicely – with neither attribute overshadowing the other.

In terms of the Advanced Warfare cigar, I smoked both the Petit and the Corona vitolas. Both vitolas performed very well, but I have to give an edge to the Petit. I found the flavors more developed with the Petit size. There is no doubt this is the most powerful Viva Republica to date in terms of strength and body. At the same time, this is a cigar that delivers plenty of flavor – and flavors that work together very well.  Because this is a powerful cigar, it is one that I would steer more toward an experienced cigar enthusiast. Finally, this is a cigar I would smoke again. It is one of the best petit coronas released this year. If the 50 count boxes are normalized to 20 to 25 boxes, it’s easily a box worthy cigar.  Given this cigar has a $5.00 price point, this is an more affordable 50 count box purchase option.  This is definitely a cigar worth checking out.