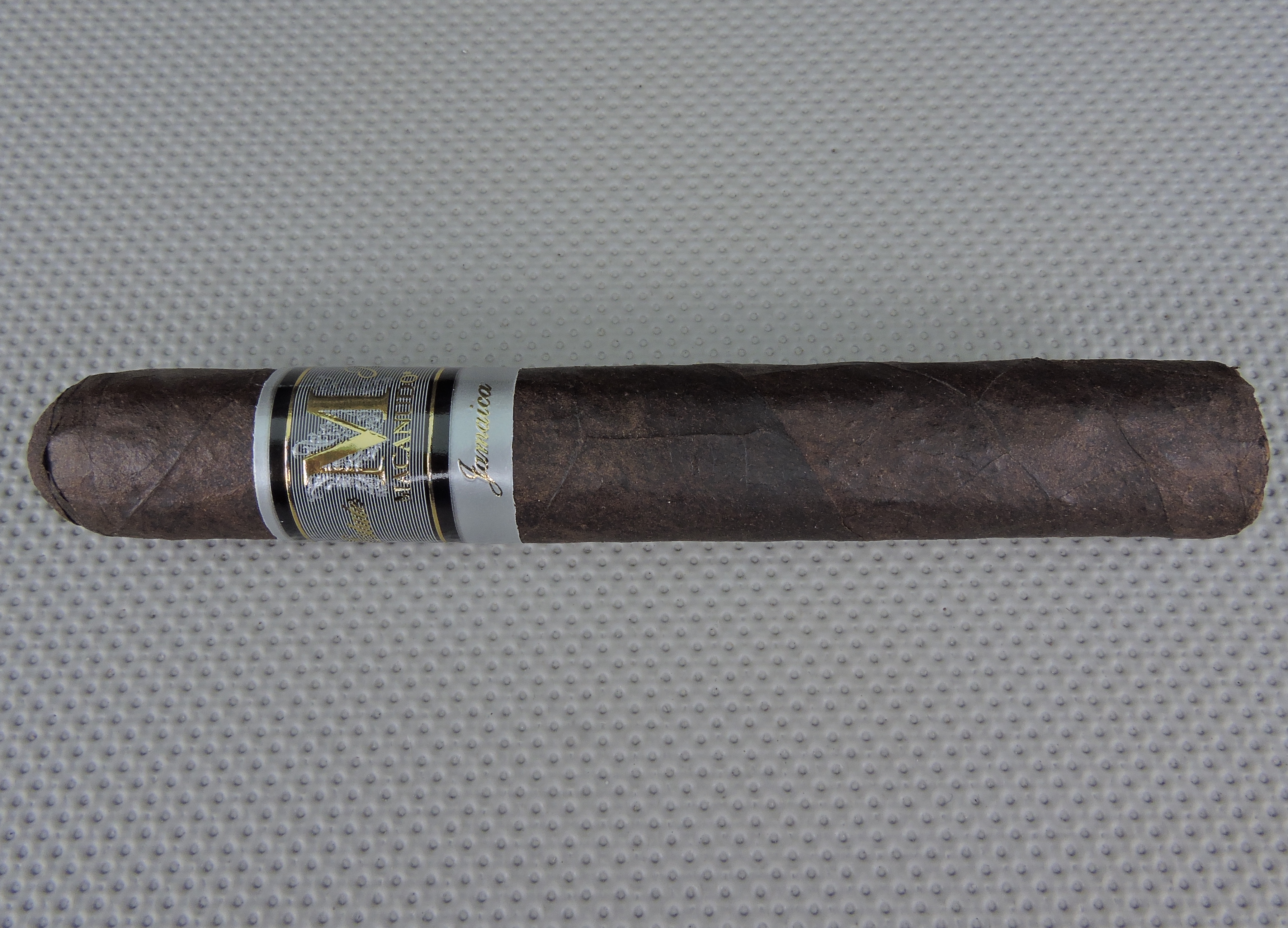 As we mentioned, the Macanudo brand (introduced in 1968) has ties to Jamaica. It was in Jamaica where for the first 30 years, the brand was produced at a dedicated factory in Kingston until the year 2000. Silver Tongue is native to Jamaica organically grown in the Montego Bay region. It is described as a low yield tobacco that is one of the most expensive filler tobaccos in the world. This is an exclusive proprietary leaf to General Cigar. 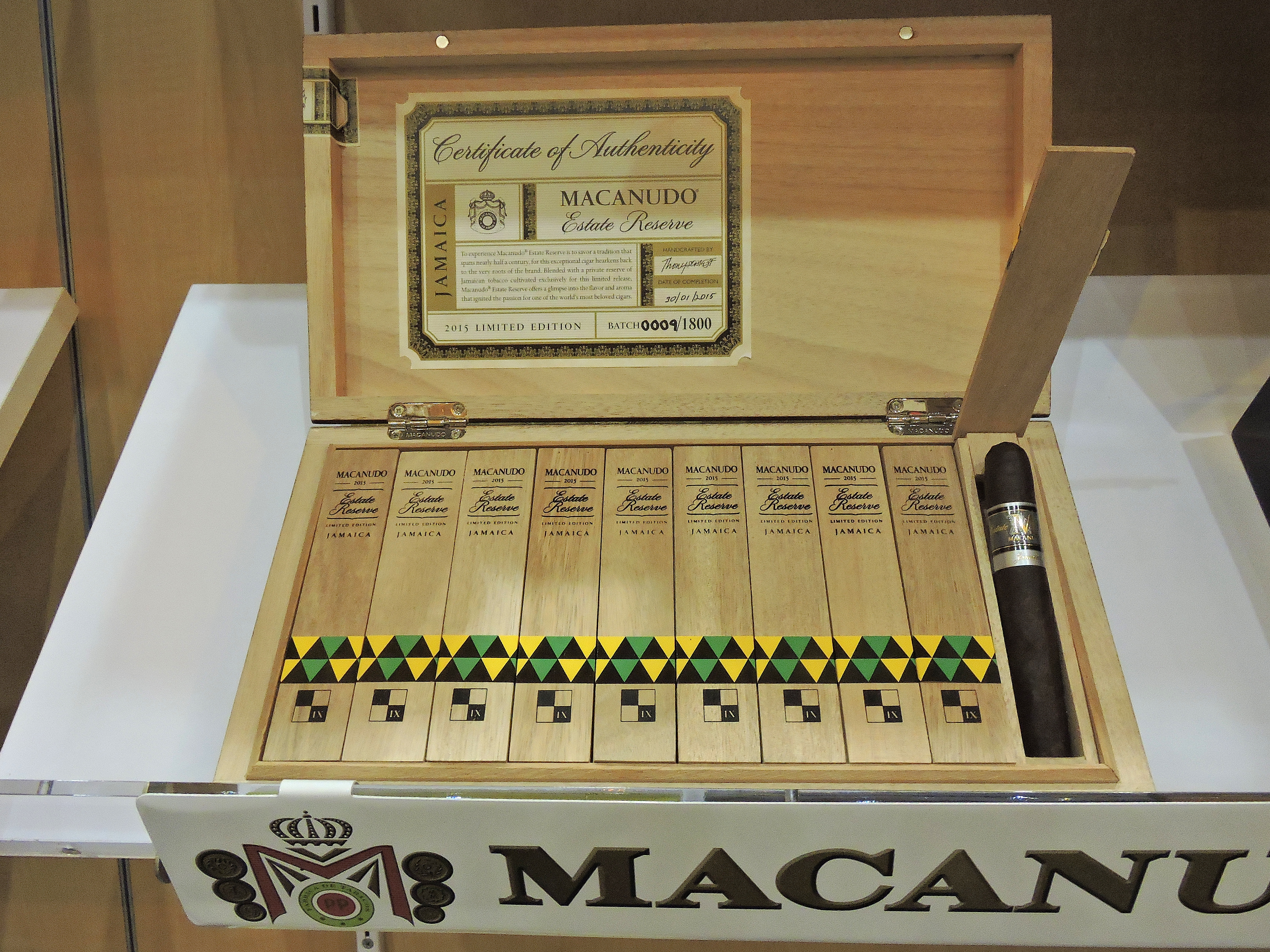 The packaging is also adorned with Jamaican flag colors: 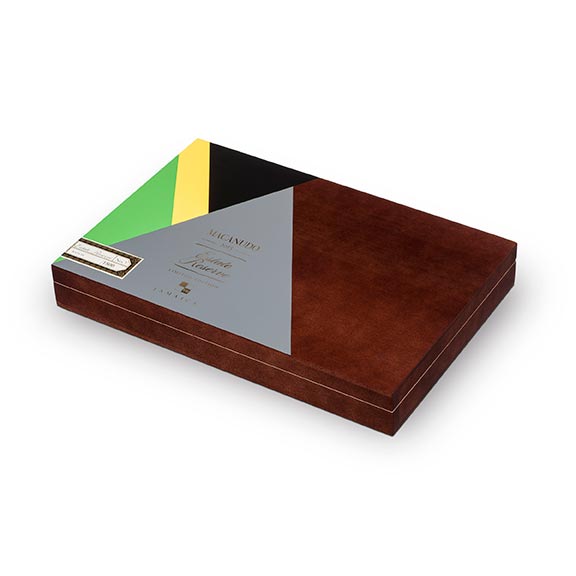 We now take a closer look at the Macanudo Estate Reserve 2015  and see what this cigar brings to the table. One note is that for this assessment, the coffin packaging was not provided with the cigars made available for this assessment from General Cigar.

The Macanudo Estate Reserve 2015 is available in three sizes. While it has not explicitly been said, the No.7, No. 8, and No. 9 refer to the 7th, 8th, and 9th frontmarks respectively (each year the series has been released in three sizes). As mentioned each cigar is packaged in an individual coffin. There are ten coffins per box with a total of 1,800 boxes per size.

The Connecticut Broadleaf wrapper on the Macanudo Estate Reserve 2015 No. 9 has a dark espresso-like color to it. The wrapper has a decent amount of oil on the surface. Any visible veins are on the thin side. While the wrapper has a dark color, there still are some thin wrapper seams that can be seen.

The band to the Estate Reserve series differs from the traditional Macanudo bands. The Estate Reserve 2015 introduces a whole new color scheme compared to the previous editions. The band has a thick gray stripe. On the stripe is a large gold “M” sitting on a silver spray design-like “M” pattern in the background.  elow the “M” is the text “MACANUDO” in small gold font. The text “Estate” and “Reserve” flank the “M” to the left and right respectively in a gold colored cursive font. There are gold, black, and silver trim above and below the thick gray stripe.  The silver stripes are on the upper and lower edge of the band.  The lower silver stripe is slightly thicker and features the text “JAMAICA” in gold cursive font on it.

Prior to lighting up the Macanudo Estate Reserve 2015 No. 9, I went with my usual choice of a straight cut. Once the cap was successfully removed, I moved on to the pre-light draw experience. The dry draw deliver a combination of coffee and citrus notes. The citrus notes had a touch of sourness. Overall I found the pre-light draw of the Estate Reserve 2015 No. 9 to be satisfactory. At this point, I was ready to light up my cigar and see what the smoking phase would have in store.

The Macanudo Estate Reserve 2015 No. 9 started out with a mix of coffee, citrus, and spice. The spice consisted of white pepper as well as cedar notes. The cedar had a wood-like char note to it as well. Meanwhile I also detected white pepper on the retro-hale.

During the first third, a dark chocolate note surfaced joining the coffee notes. While I usually consider “mocha” a combination of coffee and chocolate, I was able to pick out both notes separately. Meanwhile the citrus, pepper, and cedar notes were secondary.

The second third of the Macanudo Estate Reserve 2015 No. 9 saw the dark chocolate notes become primary. The coffee notes were now a secondary notes. The cedar and pepper notes were also in the background, but later in the second third, these notes started to increase. The citrus notes pretty much dissipated.

By the last third, I found the cedar and pepper notes had moved into the forefront. The spices were not overpowering and there still some chocolate notes that provided sweetness. This is the way the cigar experience of the Macanudo Estate Reserve 2015 No. 9 came to a close. The resulting nub was firm to the touch and cool in temperature.

Overall the burn of the Macanudo Estate Reserve 2015 No. 9 performed extremely well. The burn path remained straight from start to finish. The actual burn line was also relatively straight.  The resulting ash was on the firm side. The color of the ash varied in each of the samples – from either a salt and pepper complexion to a near white color. The cigar had an excellent combustion as the cigar had an ideal burn rate and burn temperature.

The draw to the Macanudo Estate Reserve 2015 No. 9 performed excellent. It had a touch of resistance – which is something I like. This made for an enjoyable cigar from start to finish.

Macanudo is a brand often known for its milder cigars, but has been known from time to time to venture into medium range smokes. The Macanudo Estate Reserve 2015 No. 9 is one of those cigars. This is a cigar that performed on the upper end of medium when it came to strength, and came very close to medium to full in my book. When the retro-hale was factored in, the flavors had some nice depth on the palate. I assessed the Estate Reserve 2015 No. 9 as being a medium to full-bodied smoke.  When it came to strength versus body, I gave the edge to the body.

From what I have smoked from General Cigar this year, the company is having a very good year across its brands and this release adds puts Macanudo on that list. This was an enjoyable smoke and it was one I enjoyed a little more each time I smoked it. There are times where this cigar smoked like a throwback cigar and there were times it smoked very contemporary-like. If you are looking for a maduro in the medium / medium plus profile, this is a cigar I would definitely recommend picking up. It’s a little pricey ($16.00), but it would make a nice change of pace / special occasion cigar. It’s a cigar I’d probably steer to a more seasoned enthusiast, but I certainly wouldn’t discourage a novice from trying. As for myself, this is a cigar I would definitely smoke again – and would also recommend a box split.