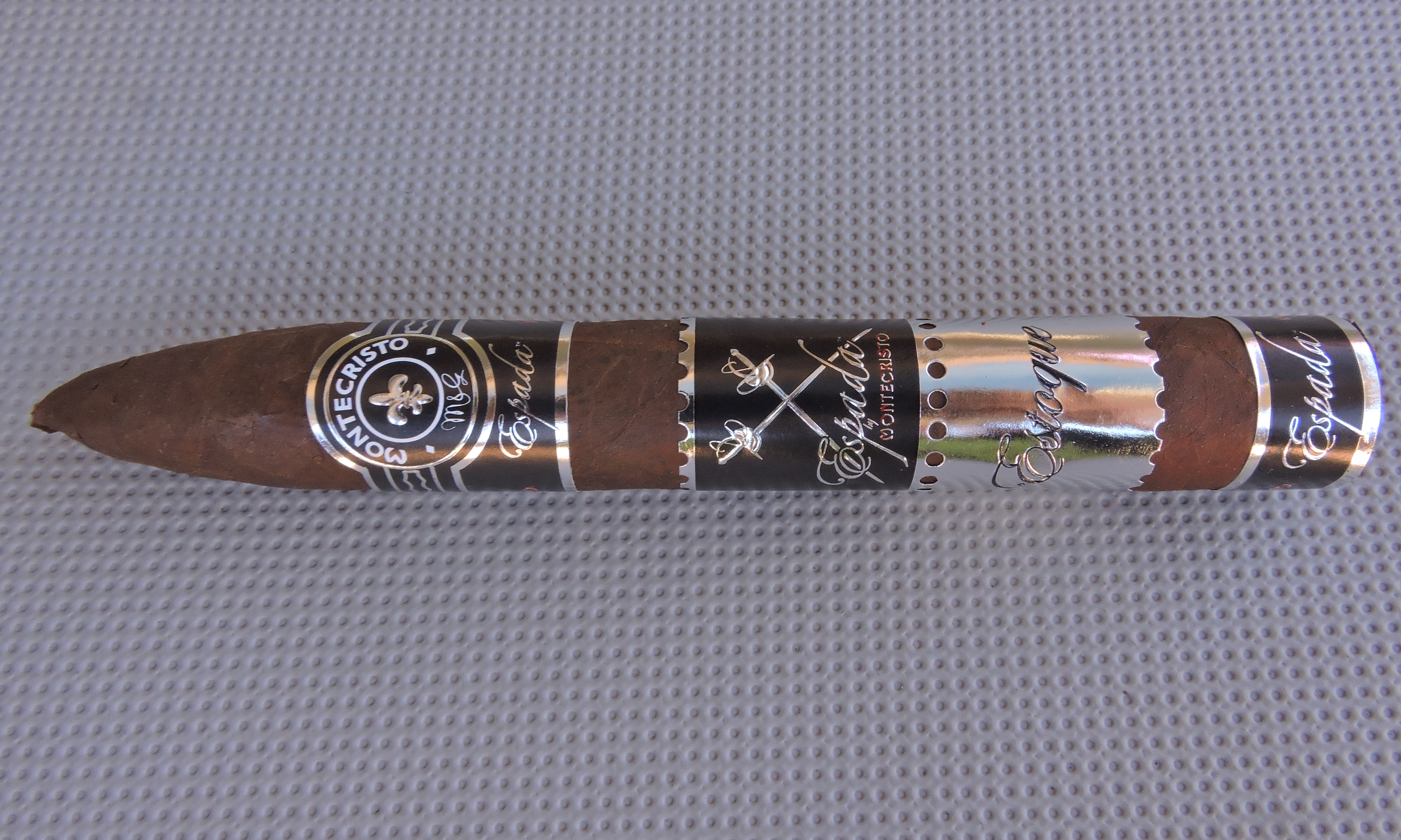 Without further ado, let’s break down the Montecristo Estoque and see what this cigar brings to the table.

As mentioned the Montecristo Estoque is a completely different blend than the rest of the Espada line.

As mentioned, the Estoque will come in one size – a 6 x 50 torpedo. The cigar is packaged in ten count boxes and production is limited to 5,000 boxes. Currently, there is not a torpedo offering in the core Espada line. 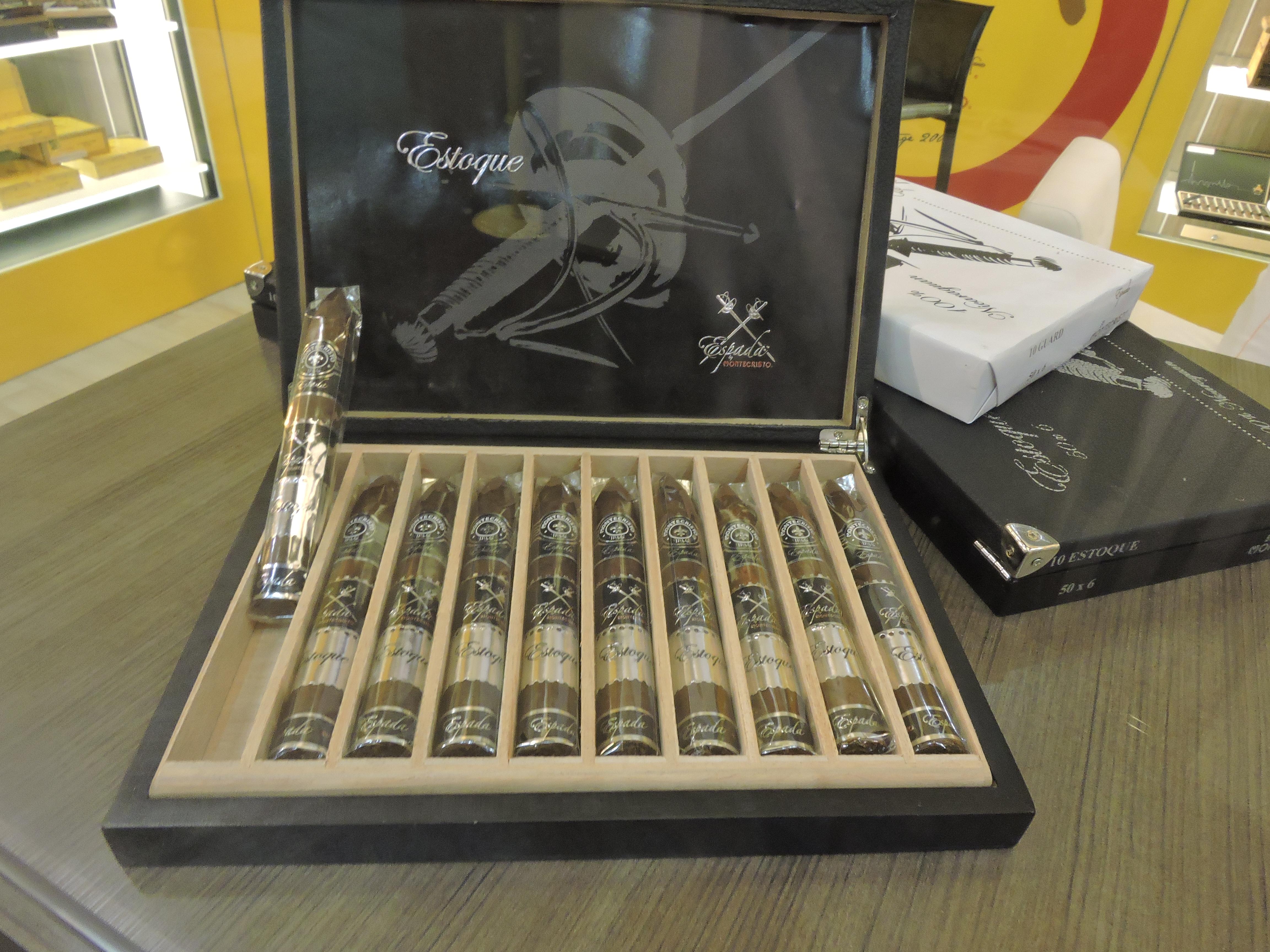 The Jalapa wrapper of the Montecristo Estoque has a roasted coffee bean look to it. It is definitely a much darker wrapper than its Espada counterparts. Upon closer examination there is a slight amount of darker marbling. The surface of the wrapper has some oil on it. There are some thin visible veins, but most of the wrapper seams are well hidden. The torpedo tip of the Estoque has a gentle taper. 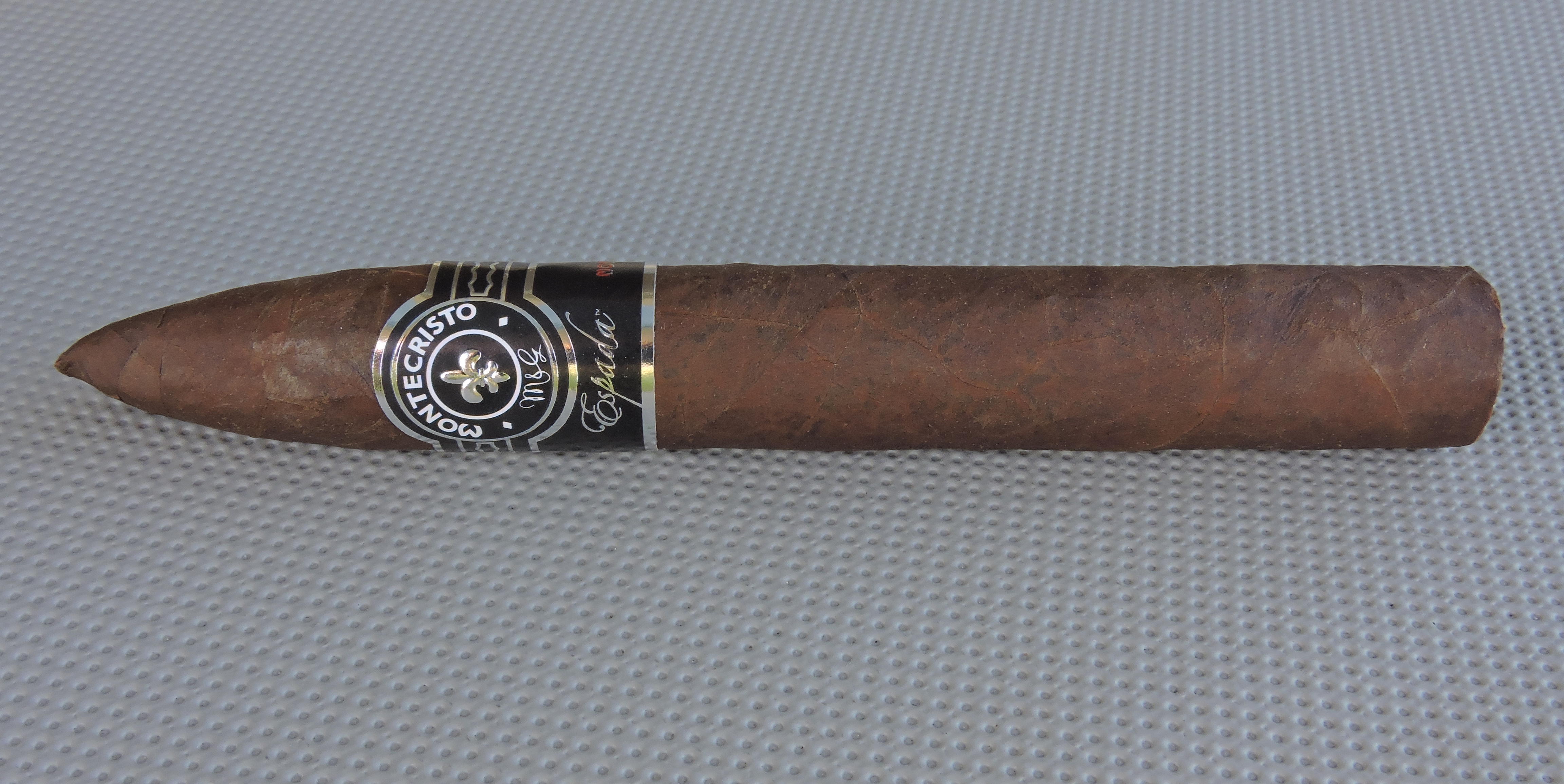 Like the original Espada line, there are three bands on the Montecristo Estoque, but it features a different and more sleek color scheme.The primary band is a variation of the standard brown Montecristo band featuring the signature fleur-de-lis in silver on a black background The black background has a glossy look to it. A white circle surrounds the fleur-de-lis. The text “MONTECRISTO” is in white font above the white circle. There is silver trim on the outer edge of the band – which also has a circular effect around the front of the band. There are silver pinstripes moving outward to the left and right with the middle pinstripes having a “wave” like effect. The band has an a simulated “extension” on the lower portion of the band – which almost looks like a secondary band. This “extension” also has a glossy black color. On the extension is the text. “ESPADA” in silver cursive font. To the left and right is the text “MONTECRISTO” in red font.

The second band starts around the 1/2 way point and goes 2/3 to the footer. The band has the appearance of a two attached adhesive stamps (in fact there is some light adhesion on the back – although it is not attached to the wrapper). The top stamp has a black background with two silver crossed swords representing the Espada logo sitting on it. Below the swords are the text “Espada” in silver cursive font with “MONTECRISTO in pale red font. The bottom stamp is silver with the text “Estoque” in black etched font.

The third band is glossy black with the text “Espada” in silver cursive font. There is gold trim across the top and bottom. To the left and right is the text “MONTECRISTO” in red font.

Prior to lighting up the Montecristo Estoque, I removed the footer band and the middle “stamp” band.  I then placed a straight cut to remove the tip of the cigar. As I have been doing with most figurado-shaped cigars, I used my Credo Special T cutter with the 36 ring gauge hole to get an ideal cut for this torpedo. Once the tip was removed, I moved on to the pre-light draw phase. The dry draw provided a mix of coffee, earth, as well as subtle notes of citrus and cedar. Overall I considered this to be an excellent pre-light draw. At this point I lit up my Montecristo Estoque and moved on to the smoking experience.

The Montecristo Estoque started out with flavors of rich coffee and a slight red pepper note. As the cigar burned through the very early stages, notes of dark chocolate joined the rich coffee flavor in the forefront. The red pepper moved into the background and was joined by some citrus.  Meanwhile the red pepper notes were also prominent on the retro-hale.

Throughout the first half of the Montecristo Estoque the coffee notes remained grounded as a primary note. The dark chocolate notes varied from time to time – moving between a primary and secondary note. The citrus and red pepper notes also remained in the background.

During the early part of the second half, both the citrus and red pepper notes increased. The citrus notes joined the coffee notes in the forefront, while the red pepper remained a (closer) secondary note. Meanwhile the dark chocolate notes still made their way into the forefront from time to time.

By the last third, I found the red pepper had moved into the forefront with the coffee and citrus. The dark chocolate notes were now a secondary note. This is the way the flavor profile held until the end. The resulting nub was firm to the touch and cool in temperature.

The Montecristo Estoque is a well-constructed cigar – and this reflected nicely on the burn. The burn took a straight path from start to finish. In addition, the burn line itself remained quite straight and did not require an abnormal amount of touch-ups. The resulting ash was on the firm side. The ash itself had a charcoal gray color with some darker streaks and speckles in it. The combustion to this cigar was excellent as it had an ideal burn rate and ideal burn temperature. 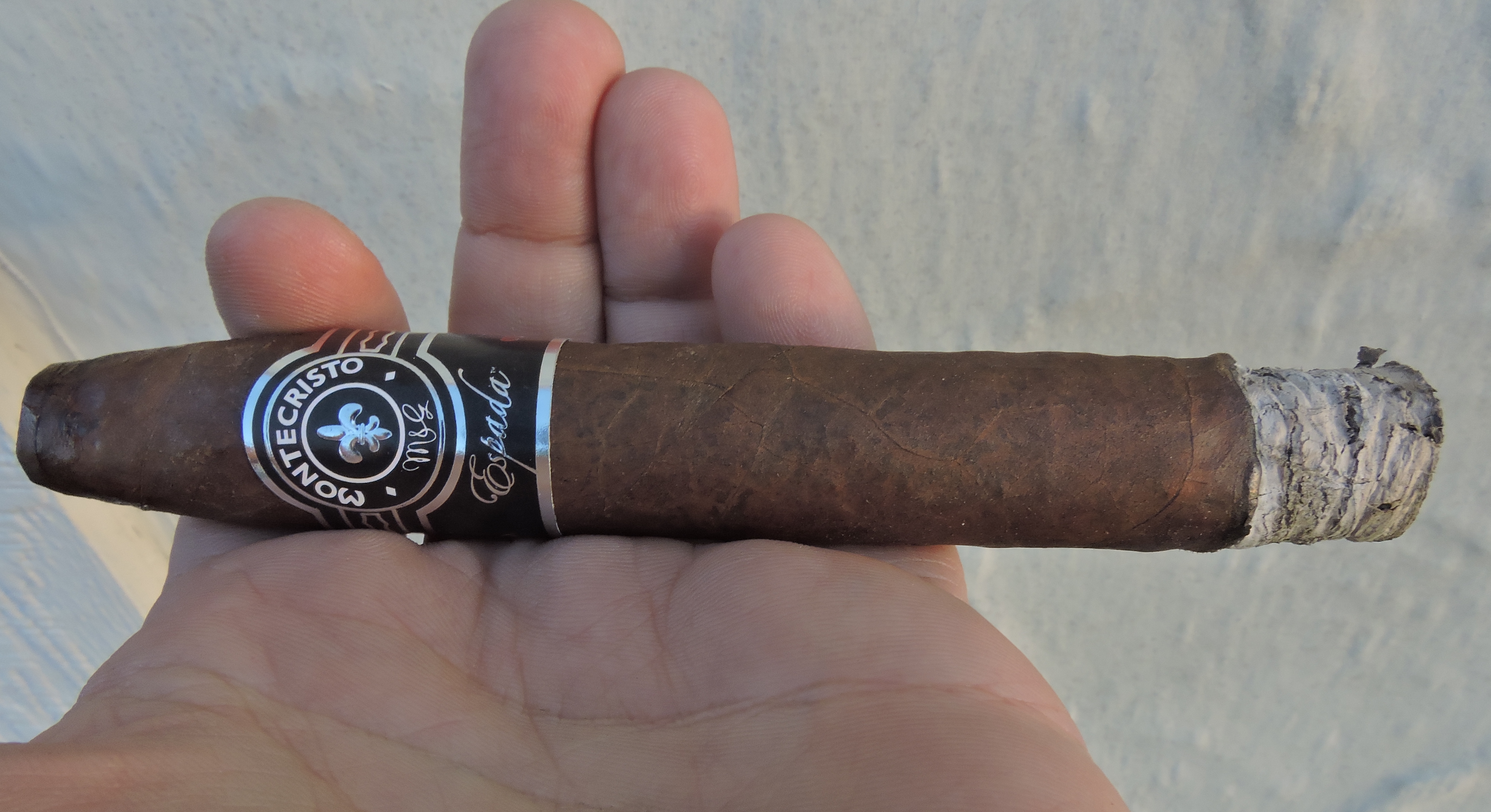 Burn of the Espada by Montecristo Estoque

The draw was outstanding as well. It was not too tight, or was it too loose – making for an enjoyable smoke from start to finish.

Looking at the strength and body of the base Espada line versus the Estoque, it seemed like the Estoque had a little less in the way strength. However when it came to body, I found the Estoque was a little bolder than the Espada.

While the Montecristo 80th Anniversary Cigar was Altadis’ showcase cigar for 2015, it’s hard to not ignore the Montecristo Estoque. I found the Estoque to be an excellent cigar that holds its own. This is a cigar that really showcases the best of what Nicaraguan tobacco has to offer. I found the torpedo shape worked excellent with this cigar, but I am quite curious to see how this blend would perform as a parejo.

With a $14.50, the Montecristo Estoque does carry a higher price point, but this is worthy of a special occasion smoke. It’s a cigar I’d recommend to a more seasoned cigar enthusiast, but certainly wouldn’t discourage a novice from trying. As for myself, this is a cigar I look forward to smoking again – and it’s worthy of a box split.