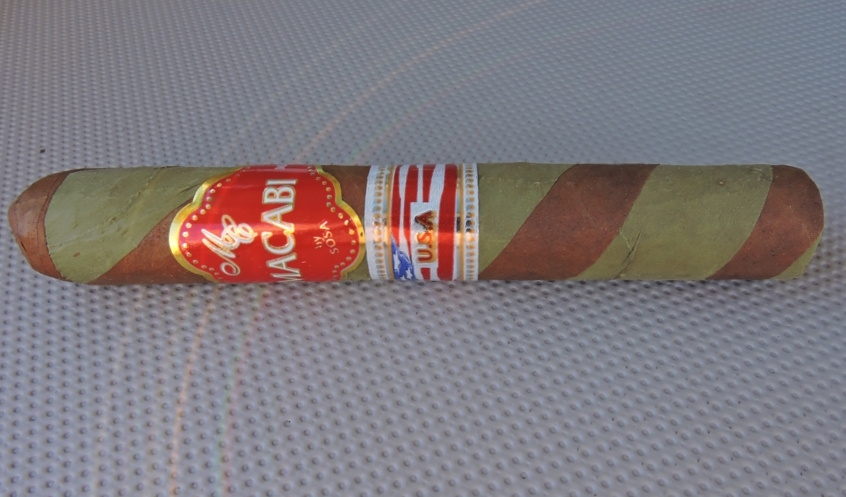 Back in October, Antillian Cigar Corporation, best known for making the Sosa Cigars brand announced a line called the Macabi USA. While this is a new line, the Macabi brand as a whole is actually one of the oldest in Antillian’s portfolio. As a part of commemorating the fiftieth anniversary of the Sosa brand, the company has been revitalizing some of its brands from the past. Earlier this year, the company launched the Imperio Cubano Miami, a re-launch and re-blend of its Imperio Cubano line being made in the United States. The Macabi USA follows a similar path as it also features two all-new blends being made in the United States. The first is the Macabi USA which is features an Ecuadorian Habano wrapped blend in five sizes.  The second, is the Macabi USA Peppermint Stick – which is a combination Habano and Candela barber-pole available in one size (Royal Corona). Recently I’ve had an opportunity to smoke the Macabi USA Peppermint Stick. Sosa Cigars has been doing some very nice things over the past few years, and the Peppermint Stick adds to that additional track record.

Barber pole cigars involve using two or more distinct wrappers – typically with contrasting colors. They are wrapped over the cigar in such a way that looks like a barber’s pole. or a candy cane Incorporating candela in a barber pole is not a new concept, but not a common one. Asylum Cigars’s Asylum 13 Ogre is arguably the most popular candela barber pole on the market.  Orlando-based retailer Corona Cigar Company also used candela on a barber pole. Perhaps the Macabi USA is unique because it is a U.S. (specifically Clearwater, Florida) made candela barber pole.

Macabi USA continues a trend by Sosa Cigars over the past few years of small batch production.  The Macabi USA will be made by a single “Level 9” roller who has 10 years experience at the H. Upmann factory, and 20 years total rolling experience. According to Sosa Cigars, production of Macabi USA is limited to 25,000 cigars per year.

The Macabi USA Peppermint Stick features a five country multi-national blend. The barber-pole wrapper is a combination of Habano and Candela from Ecuador.

The Macabi USA Peppermint Stick is available in one size – a 5 x 50 Royal Corona (i.e. a Robusto size). The cigars are packaged in 20 count boxes. 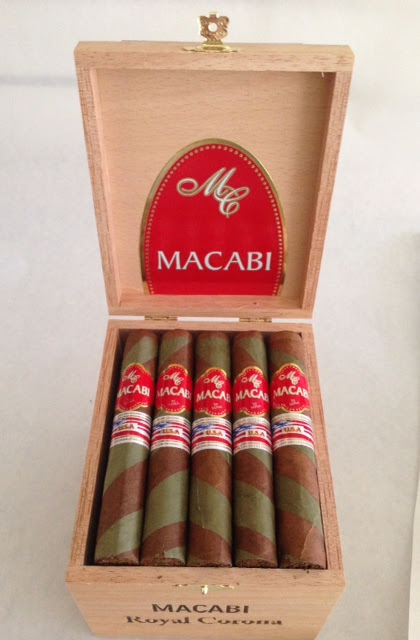 The barber pole wrap of the Macabi USA Peppermint Stick consists of a candela wrapper with a weathered green color and a habano wrapper with a slight colorado red tint to it.  There isn’t much in the way of oil on the surface of the wrapper. The wrappers are relatively smooth with clean wrapper seams and thin visible veins.

There is a secondary band just below the primary one on the cigar. The band has silver background. Sitting on that background is a U.S. flag design to it with the text USA (in gold font) resting on top of it. The band has a dotted gold pattern toward the upper and lower edge.

Prior to lighting up the Macabi USA Peppermint Stick Royal Corona, I went with my usual choice of a straight cut. Once the cap was clipped, I moved on to the pre-light draw experience. The dry draw delivered notes of cream, leather, grass, and some cedar notes that provided both sweetness and spice. Overall I considered this to be a satisfactory pre-light draw. At this point I was ready to light up the Macabi USA Peppermint Stick and see what the smoking experience would deliver.

During the second third of the Peppermint Stick, the grassy notes increased and joined the cream notes in the forefront. I found there was now a slight sweetness to these grassy notes. Meanwhile the cedar and natural tobacco notes remained in the background.

At the start of the final third, I still found the cream and sweet grassy notes in the forefront. I found there still were some cedar notes, but the natural tobacco had given way to a subtle cocoa powder note to it. This is the way the cigar experience of the Macabi USA Peppermint Stick came to a close. The resulting nub was firm to the touch and cool in temperature.

Overall I found the Macabi USA Peppermint Stick Royal Corona performed quite well when it came to its burn. The cigar maintained a straight burn path from start to finish. There was a slight jaggedness on the burn line itself, but this wasn’t one that required frequent touch-ups. The resulting ash had a charcoal gray color with some firmness to it. The cigar had an ideal burn rate and ideal burn temperature. 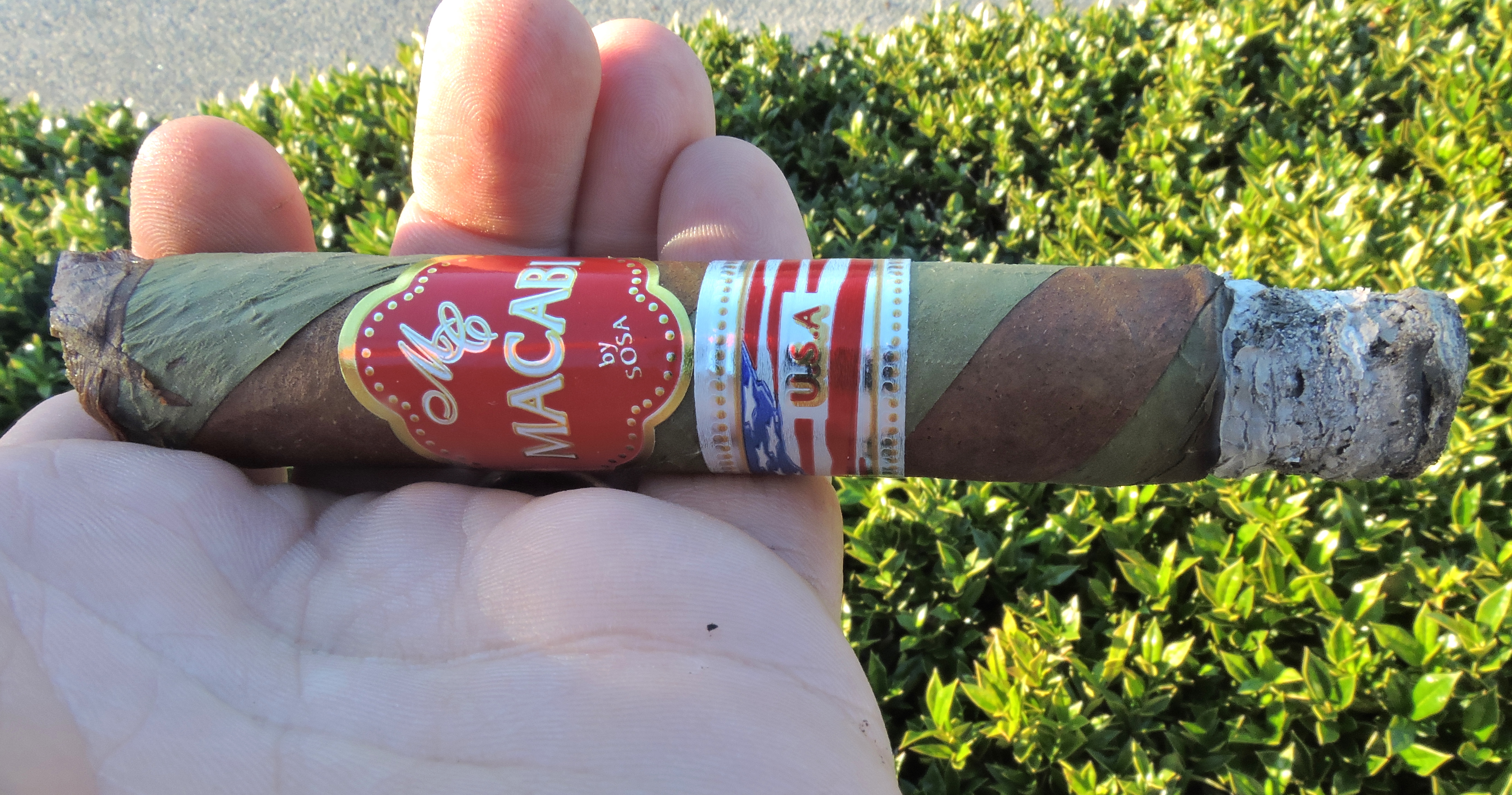 The draw performed quite well. This was a draw that was not too open, but not tight. This made the Macabi USA Peppermint Stick to be an enjoyable cigar from start to finish.

The Macabi USA Peppermint Stick Royal Corona is not going to be a power-house – and the candela wrapper is going to deliver dialed back cigar. From a strength perspective, I found this cigar started out mild. By the second third, the Peppermint Stick was in the mild to medium range – where it stayed.  As for the body, I found this mild to medium throughout.  In terms for strength versus body, I gave a slight edge to the body.

When it comes to candela, I find it to have a polarizing effect on most cigar enthusiasts – either people like it or not. The Peppermint Stick might be a barber pole with candela, but it’s the candela component that seemed to have the most edge in this cigar. I found the Peppermint Stick to deliver a very classic candela profile – lots of sweet grassy and cream notes.  This cigar was on the milder side as well and it worked well with the flavors delivered. Overall I found this to be a very good cigar. It’s a cigar I would recommend to an experienced or novice enthusiast who enjoys a candela cigar. As for myself, it’s a cigar I’d smoke again and worthy of a five pack to have multiples in my humidor.