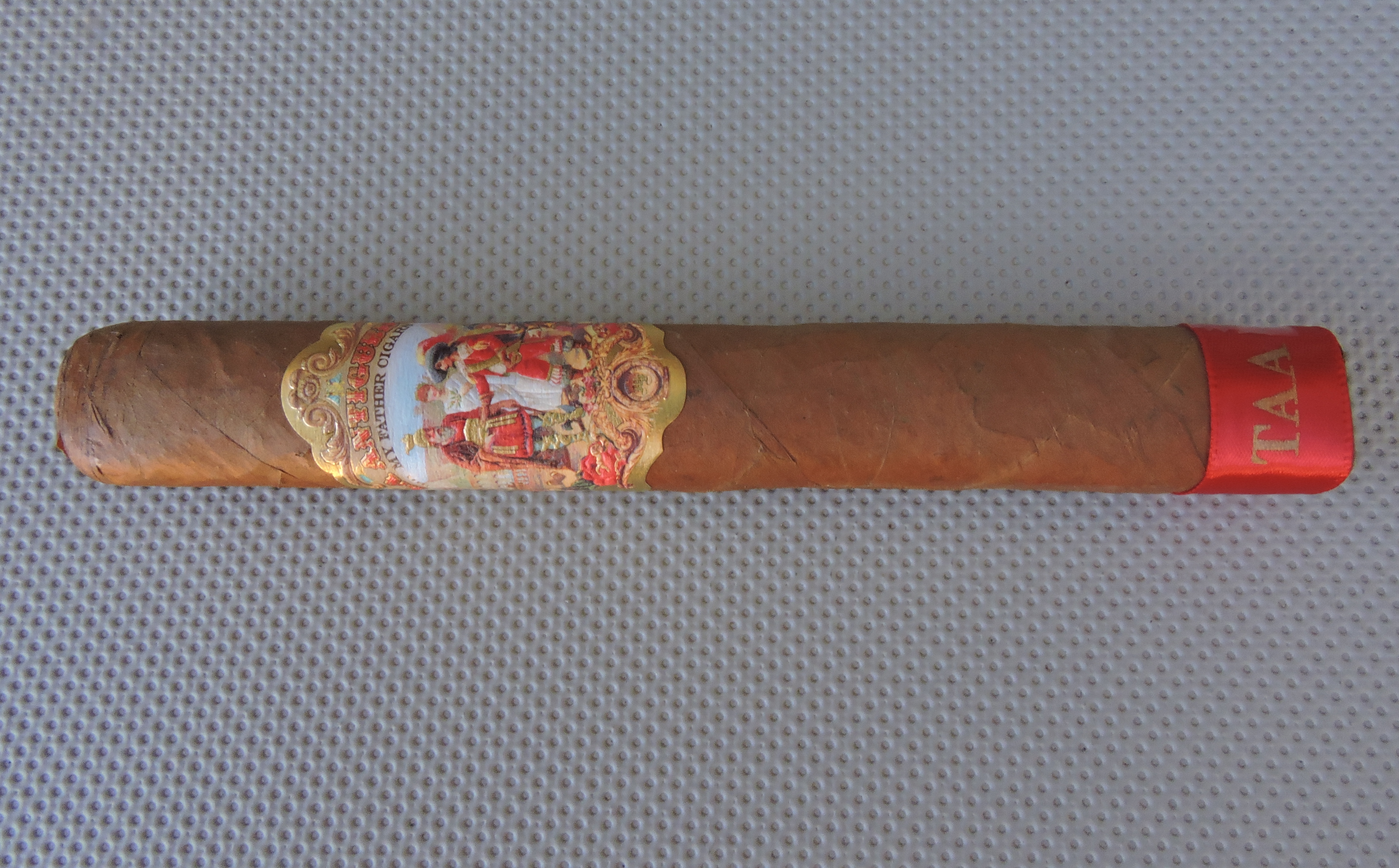 Today we complete our look at the ten cigars making up the 2015 Tobacconist Association of America (TAA) Exclusive Series with the La Antiguedad TAA Exclusive 2015 by My Father Cigars. For this installment by My Father Cigars, the company provides a version of its regular production La Antiguedad line that incorporates an Ecuadorian Habano Rosado wrapper as opposed to an Ecuadorian Habano Oscuro wrapper. This is the third exclusive cigar provided to the TAA by My Father Cigars. In 2011, the Jaime Garcia Reserva Especial TAA Edition a box-pressed torpedo based off the regular production Jaime Garcia line was released. In 2014, My Father TAA Exclusive 2014, a box-pressed Toro based off the regular production My Father line was released. Recently I’ve had an opportunity to smoke the La Antiguedad TAA Exclusive 2015. Overall I found the edition of the Rosado wrapper created an interesting, yet satisfying cigar experience.

Without further ado, let’s take a closer look at the La Antiguedad TAA Exclusive 2015 by My Father Cigars and see what this cigar brings to the table.

In addition to the Rosado wrapper, the remainder of the blend is all-Nicaraguan. Like the original blend, the cigar features a double Nicaraguan binder and an all-Nicaraguan filler.

The Rosado wrapper of the La Antiguedad TAA Exclusive 2015 had more a light caramel color. Depending on how the light shines on the wrapper determines how much of a rosado tint this wrapper shows off. There is some oil on the surface of the wrapper. Any visible veins are quite thin, and the wrapper seams are also on the thin side. The box-press is more of a soft cuban-style press.

The band of the La Antiguedad TAA Exclusive 2015 is the same that is found on the regular production line. The band has a oil-painting look that is reminiscent of the days of the Spanish Empire in the New World.  Above the image is the text “LA ANTIGUEDAD” in a classic red font. Below that text is the text “MY FATHER CIGARS” in a small thin gold font. The remainder of the band has lots of gold adornments.  There is also a red ribbon over surrounding the footer of the cigar with the text “TAA” in a mustard color font.

Prior to lighting up the La Antiguedad TAA Exclusive 2015, I went with a straight cut to remove the cap. After successfully clipping the cap, I moved on to the pre-light draw. On the cold draw, I picked up a combination of pepper, natural tobacco, and a slight amount of wood notes. Overall, I considered the pre-light draw of the La Antiguedad TAA Exclusive 2015 to be satisfactory. At this point, I removed the footer ribbon, lit up my cigar, and awaited what the smoking phase would have in store.

The La Antiguedad TAA Exclusive 2015 started out with more in the way of wood notes. In the background I picked up some black pepper and a slight apple sweetness. Meanwhile the retro-hale produced notes of black pepper.

During the first third, a caramel note surfaced in the forefront. This flavor joined the wood notes as a primary note. Both the wood and caramel alternated in intensity throughout the first two thirds of the cigar experience. Meanwhile the apple sweetness and black pepper remained in the background.

By the last third of the La Antiguedad TAA Exclusive 2015, the pepper notes joined the wood notes in the forefront. The sweetness dialed back on this cigar as the caramel and apple sweetness became a more distant background note. This is the way the cigar experience came to a close. The resulting nub was soft to the touch and cool in temperature. 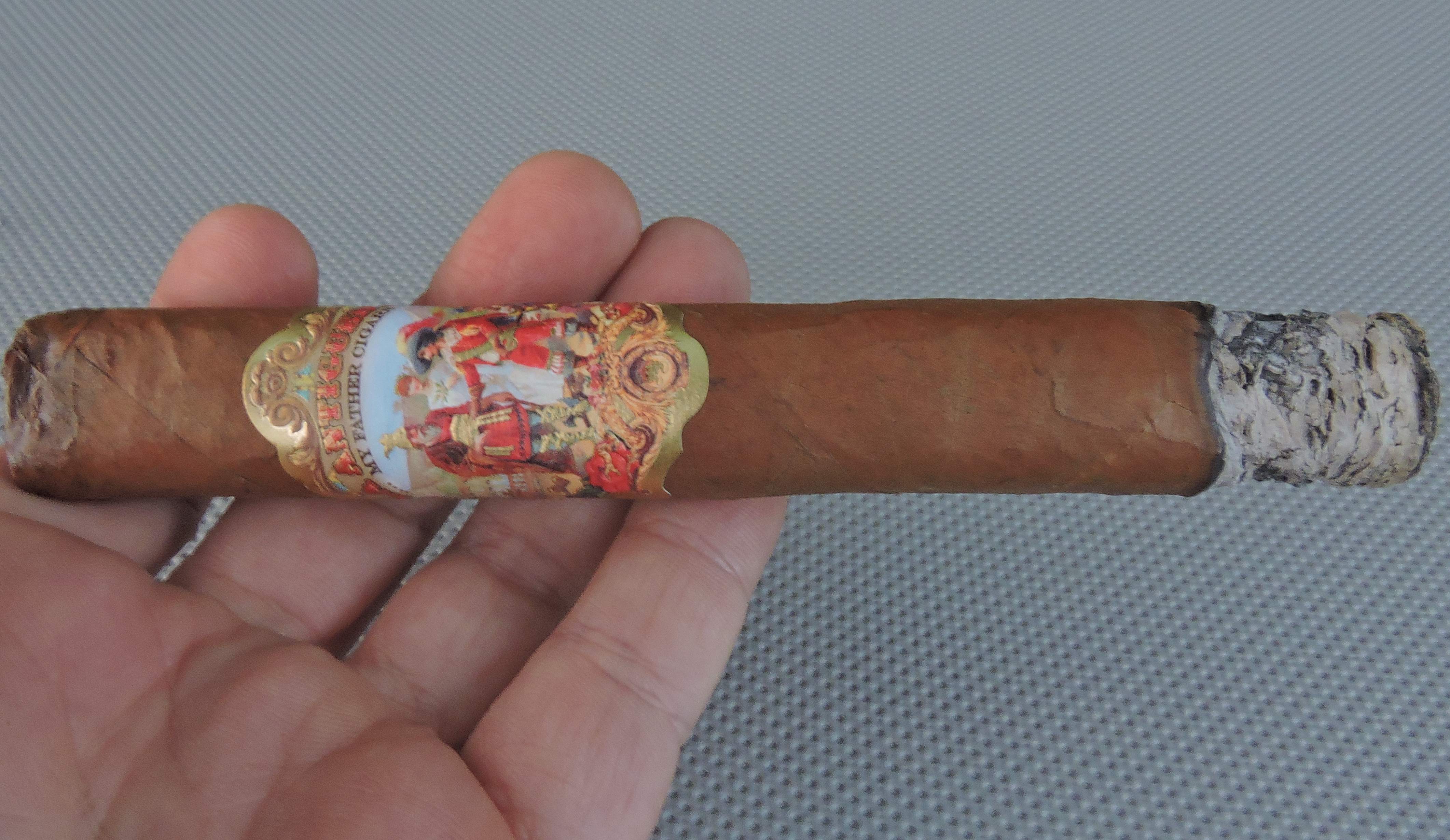 The draw of the La Antiguedad TAA Exclusive 2015 performed quite well. I found this draw on the open side. Overall, this was a low maintenance cigar to derive flavor from.

One thing I found quite different with the La Antiguedad TAA Exclusive 2015 is that this much more dialed back when compared to the regular production La Antiguedad. Right out of the gate, I found the strength level of the La Antiguedad TAA Exclusive 2015 to be mild.  The strength did increase and by the middle of the first third, it progressed to mild to medium. The strength continued to increase, and by the midway point, this cigar had crossed into medium territory. During the second half, the strength leveled off and stayed medium for the remainder of the cigar.

As for the flavors, they also started out dialed back. I found this to be a mild to medium-bodied cigar out of the gate. The body did increase and by the second third, it crossed into medium-bodied territory. Like the strength, the body leveled off in the second half.