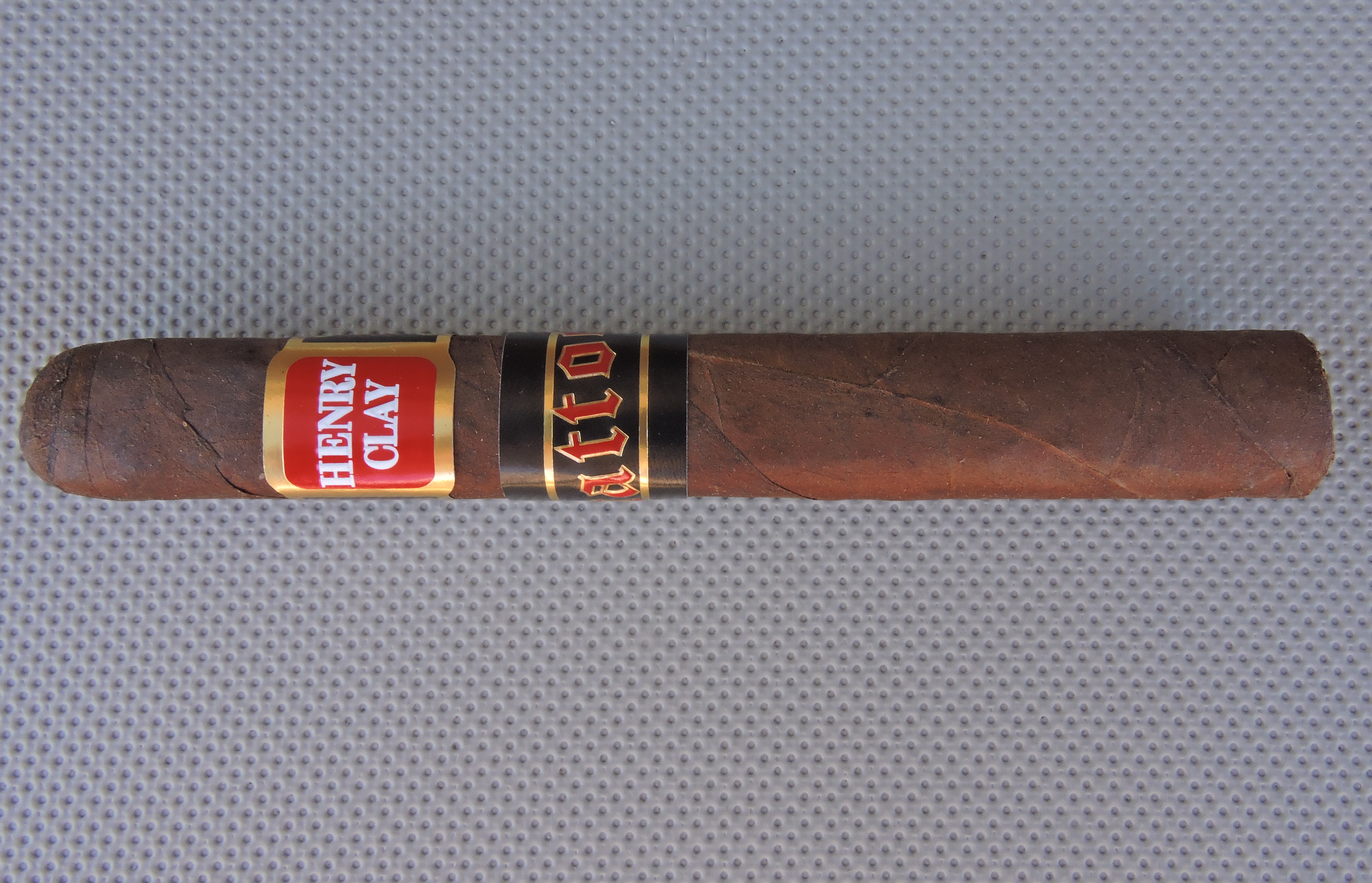 From Altadis’ point of view, the idea of collaborating with others in the industry is not new. We first saw this last year when the company teamed up with Placencia to produce the Espada by Montecristo. Earlier this year, Altadis announced it was collaborating with Boutique Blends to produce the Romeo by Romeo y Julieta Aging Room Small Batch F25. From Johnson’s standpoint, this is something different as we have not seen him involved in a project outside the My Father / L’Atelier family. It’s also different because Johnson’s work has come out of either Nicaragua or Miami – and not the Dominican Republic.

The Tattoo name is derived from Johnson’s company Tatuaje. The name Tatuaje is Spanish for Tattoo.

The Henry Clay Tattoo was announced prior to the 2015 IPCPR Trade Show. As mentioned this was a limited production with 50,000 cigars produced (2,500 boxes). Given the collaboration, it was anticipated to be one of the most releases to make its debut at the trade show. The cigar lived up to its expectations as Altadis sold out the total allocation to retailers.

Without further ado, let’s break down the Henry Clay Tattoo and see what this cigar brings to the table.

The Henry Clay Tattoo is available in one size – a 6 x 52 Toro.  The cigar is a square box-press known as a Breva Bundle Press – a format used on the original Henry Clay bland. 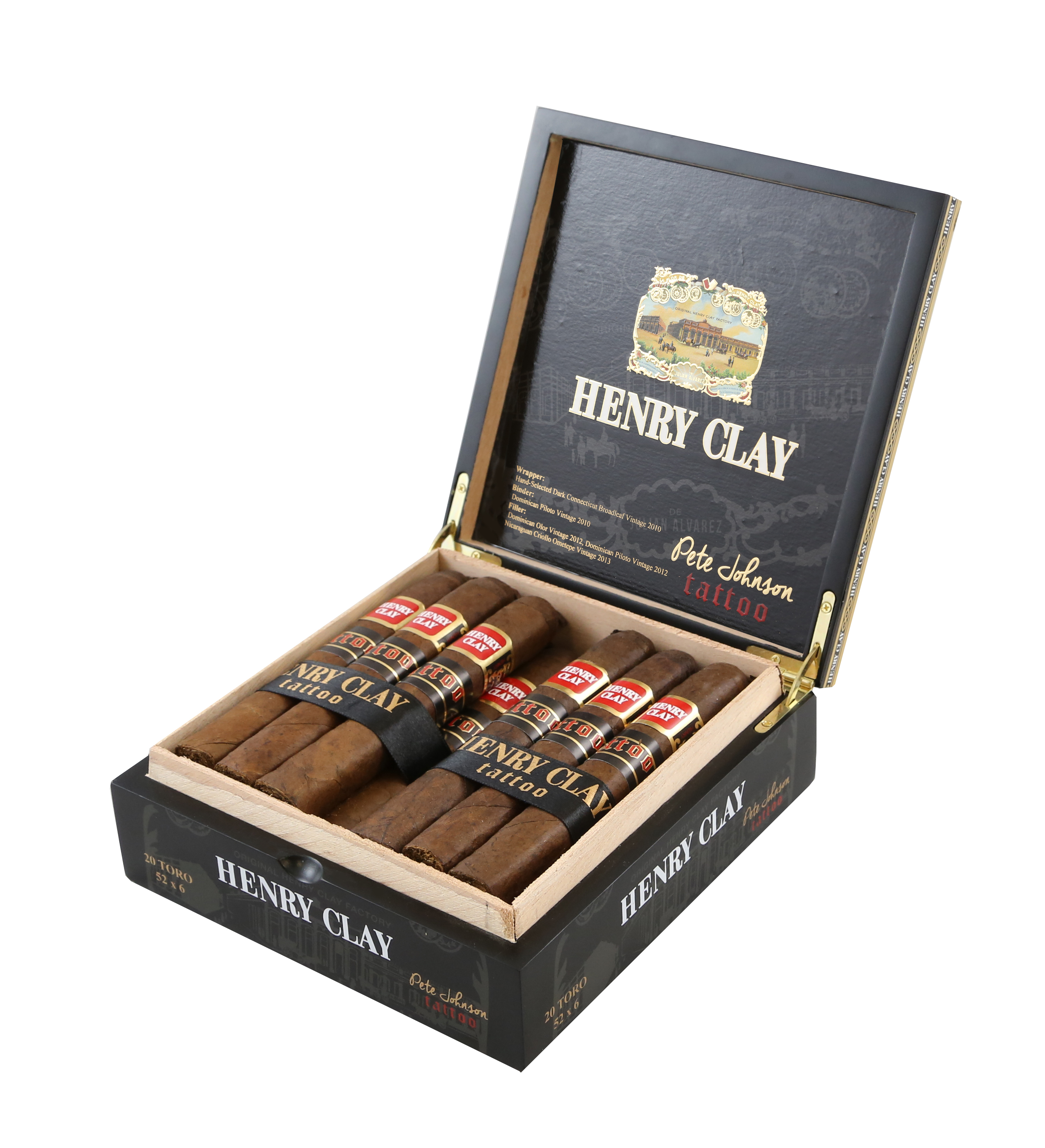 The Connecticut Broadleaf wrapper of the Henry Clay Tattoo has a classic coffee bean color to it. Depending on how the light shines on the wrapper, it may give off a Colorado red tint to it. Upon closer examination, there is some darker marbling on the surface of the wrapper. There also is some oil on the surface of the wrapper. The wrapper has some visible veins and most of the wrapper seams are on the thin side. There is a pig-tail affixed to the cap. As mentioned, the cigar itself is a square press and there were no soft spots on this cigar.

There are two bands on the Henry Clay Tattoo. The primary band is a variation of the original Atladis Henry Clay cigar. The front of the band features a red square-shaped background trimmed in gold. The text “HENRY CLAY” sits on that background in white font. The left and right side of the band is black and features gold trim and gold adornments. On the left side of the band close to the front is the red font text “CLAY” in landscape mode. The right side has text “HENRY” – also in red font and landscape mode close the front.

The secondary band sits just below the primary band. This is a black band featuring a gold pinstripe on both the upper portion of the band and the lower portion. The text “tattoo” in a  large modern styled red font with gold trim goes across the band on a slight angle.

As opposed to pulling the pig-tail off the Henry Clay Tattoo, I opted to go with my usual choice of a straight cut to remove the cap. Once the cap was successfully clipped, I moved on to the pre-light draw phase. The dry draw to the cigar provided notes of earth and coffee and had somewhat of a “gritty” feel to it. Overall I considered this to be a satisfactory pre-light draw. At this point I was ready to light up the Henry Clay Tattoo and see what the smoking phase would have in store.

The Henry Clay Tattoo began with a combination of earth, roasted coffee, and white pepper. The earth and coffee notes became primary early on. The white pepper notes took to the background, however I found them to be prominent on the retro-hale.

When the Henry Clay Tattoo hit the second third, I found the earth and coffee notes remained primary. The white pepper was still in the background, but there also was a slight cream note that emerged in the background. Finally, there was some chocolate sweetness that emerged. From time to time the chocolate note was present in the forefront.

By the last third, the flavor profile got a little grittier. I found the earth notes became the sole primary note. The white pepper notes increased, but didn’t quite make it to the forefront. The coffee notes were now quite distant in the background while the chocolate and cream notes dissipated. This is the way the cigar experience of the Henry Clay Tattoo closed. The resulting nub was cool in temperature, but soft to the touch.

One side note, when this cigar was first released, I found it to be a much grittier, rougher cigar from start to finish. Now with several months of age, I found more in the way of smoothness. While it still had a grittier component in the last third, this cigar had definitely smoothed out a bit.

Overall I found the Henry Clay Tattoo maintained a straight burn path from start to finish. While the burn line itself started out straight, I did find it got more irregular from time to time and this became a cigar that was in need of frequent touch-ups. The resulting ash also started out firm, but I did find it to get looser as the cigar experience progressed. The ash itself had a gray color with some darker speckling. Meanwhile the burn rate and burn temperature were ideal. 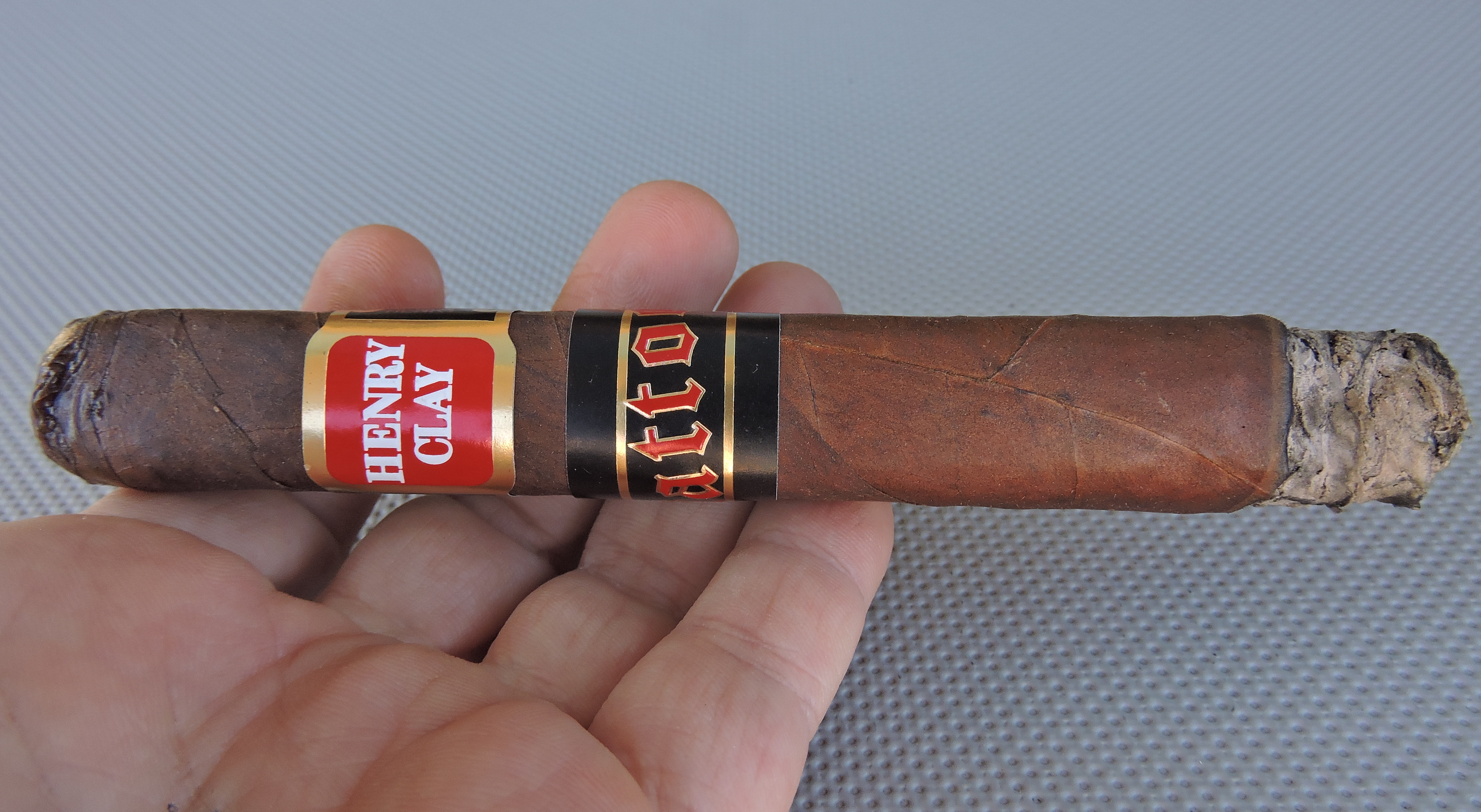 Burn of the Henry Clay Tattoo

As for the draw, I found this to be open, but not loose on most of the cigars I smoked. I did find one sample to have a little more resistance to it, but I wouldn’t consider it a tight draw.

When the Henry Clay Tattoo was released late last summer, I found this cigar was more of a medium to full cigar. Much like this cigar smoothed out over the past few months, I also found there was some mellowing. Overall I found the Henry Clay Tattoo was now on the upper end of medium.  In terms of strength versus body, I found both attributes balanced each other very nicely.