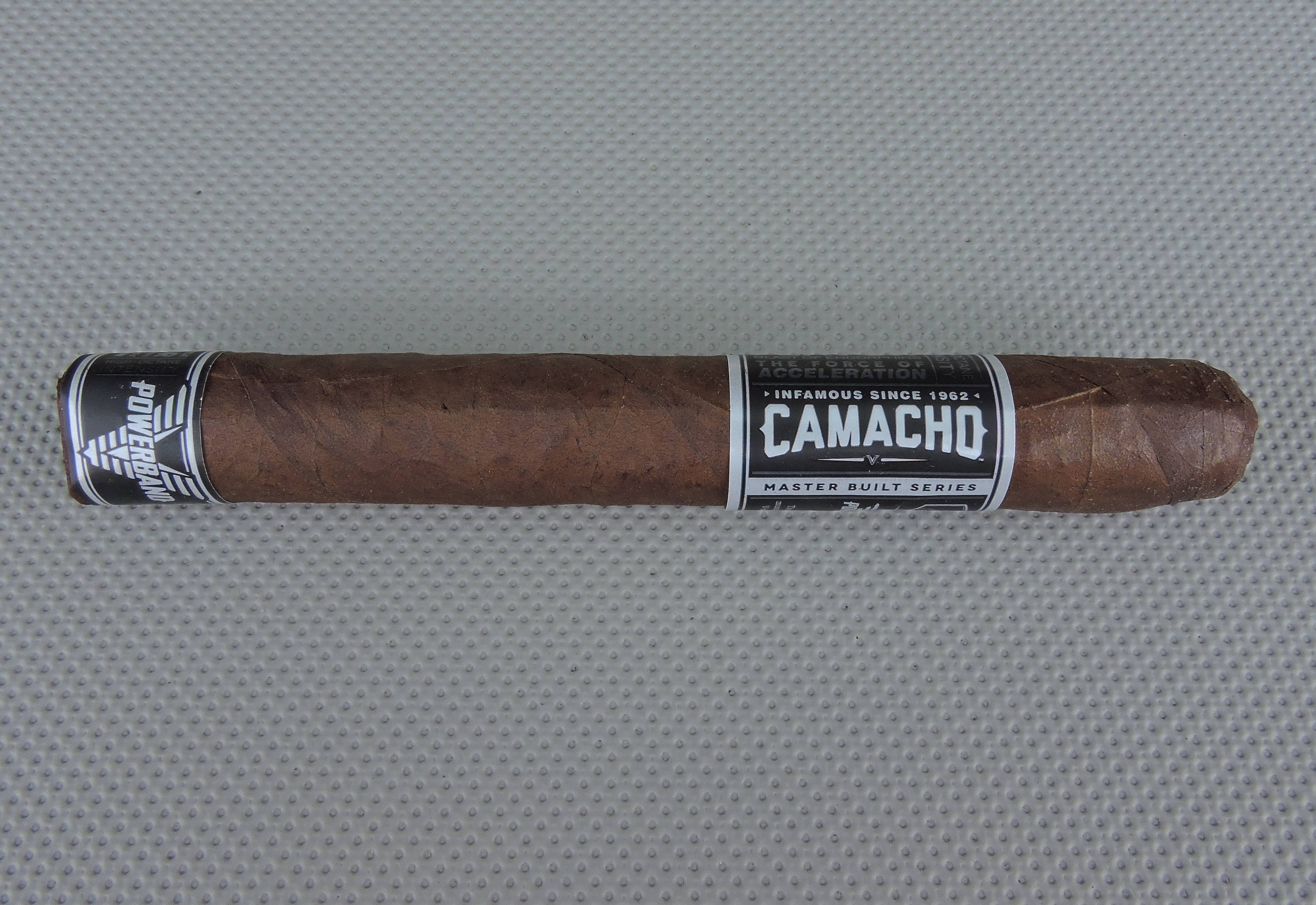 This past June, Camacho Cigars rolled out its latest regular production cigar, the Camacho Powerband. Since the historic re-launch of the brand in 2013, Camacho Cigars has used the month of June to do a major launch of a regular production line. In 2013, Camacho launched its rebranded portfolio. This followed in 2014 with the release of Camacho Ecuador and last year the Camacho American Barrel Aged was released. Camacho’s theme for its rebranding is “The Bold Standard” – a series of fuller, stronger cigars. The Powerband continues along the lines of that theme drawing its inspiration from the “power, performance, and acceleration associated with the classic V-twin engine”. Today, we take a closer look at the Camacho Powerband in the Toro format. It’s safe to say the relaunch of Camacho might be the most successful in the history of the cigar business. The Camacho Powerband Toro adds to that story, delivering on the promise of boldness while also delivering an enjoyable smoking experience.

The name “power band” refers to the rpm range of an engine makes the most power. It is the point where one can feel the engine pulling the vehicle the strongest.

One theme that has been consistent with Camacho’s parent company of Davidoff is one of innovation. Camacho has designed a sub-brand called the Master Built Series that epitomizes that theme. The first release of the series, the Camacho American Barrel Aged incorporated a six year old Honduran Corojo leaf aged in Kentucky bourbon barrels as a part of the filler. The Camacho Powerband is now the latest installment of the Master Built Series. The innovation for Powerband involves a proprietary bunching technique when constructing the cigar. In the end it facilitates the process of delivering superior construction while bringing out the best in the boldness and flavor of the cigar. Camacho also moved its long-time Triple Maduro cigar into the Master Built Series with the innovation being the fact that it was one of the original all-maduro cigars.

Without further ado, let’s break down the Camacho Powerband Toro and see what this cigar brings to the table.

The Camacho Powerband is a multi-national blend of tobaccos from five countries. The filler features corojo from both Nicaragua and Honduras. Corojo is a staple tobacco found in blends across the Camacho line. The blend also incorporates three different types of ligero – each from a different country of origin. The cigar is produced in the Dominican Republic, the second Camacho regular production cigar to come out of that country. 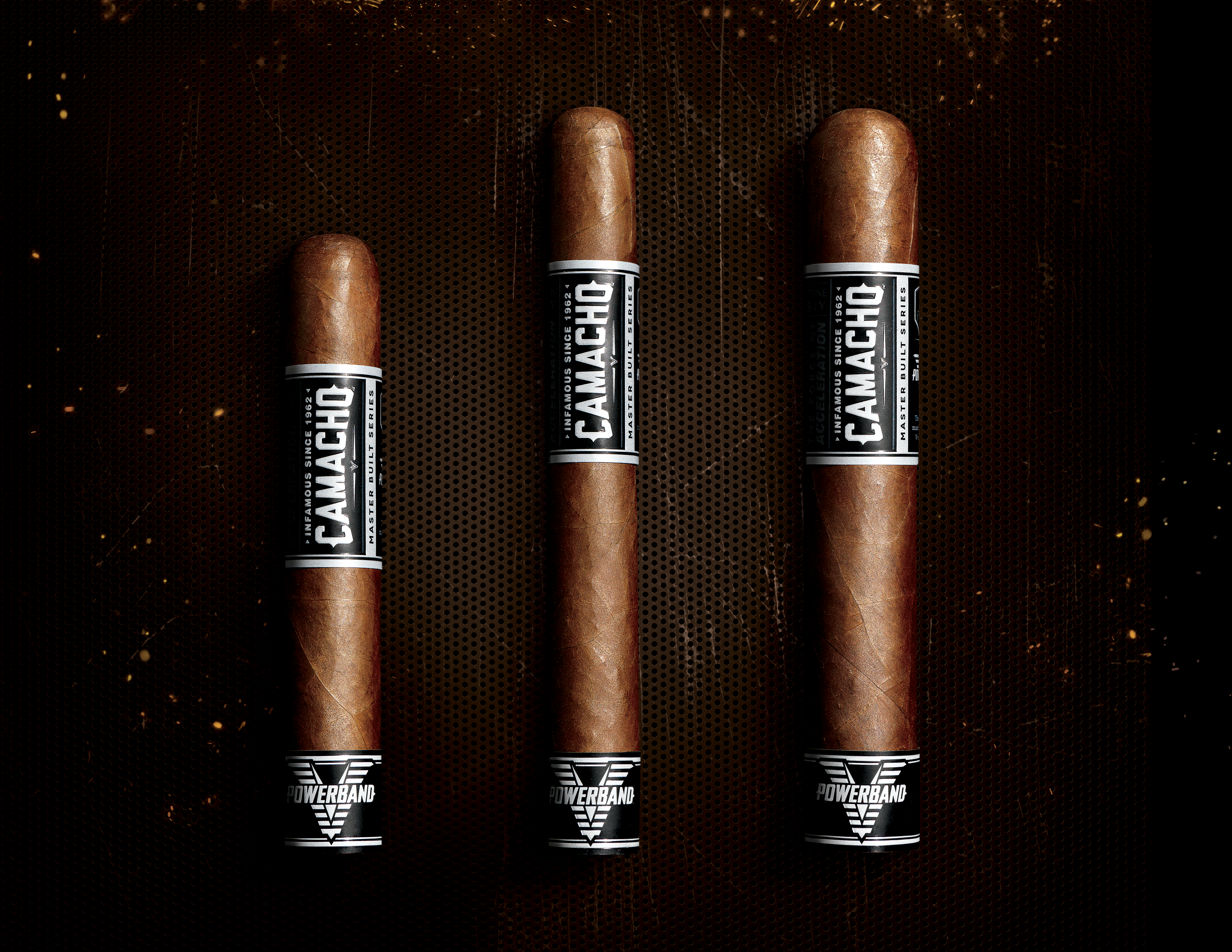 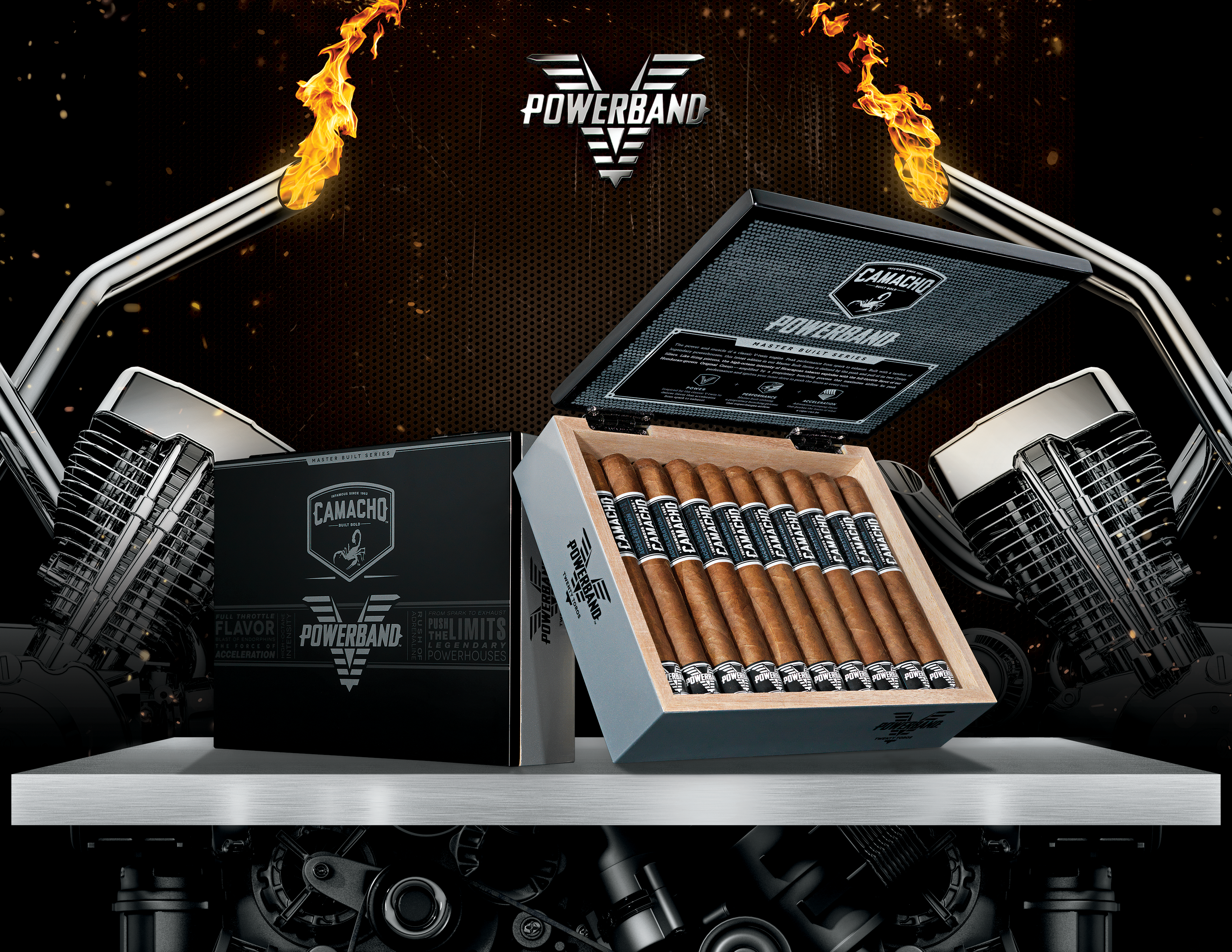 There are two bands to the Camacho Powerband. Each band has a mostly black, silver, and gray color scheme to it. The primary band design is arranged in the horizontal style that is prevalent throughout the Camacho line. It captures both the theme of the Powerband and the theme of Camacho. We outline the details below:

Looking at the band horizontally (landscape mode) from top to bottom, there are several components:

The Top component is black with gray text. It has a left and right sub-component. The left component has the text “FULL THROTTLE FLAVOR; BLAST OF ENDORPHINS; THE FORCE OF ACCELERATION”. The right component is sideways with the text “HIGH OCTANE INTENSITY. There is a silver divider below it with the text “MASTER BUILT SERIES” in black font

The next component has the Camacho logo / slogan “CAMACHO INFAMOUS SINCE 1962” in silver font.

A third component sideways with silver font. The left side features the Camacho scorpion logo, the Powerband V logo, and the text “The Power and Muscle of a classic V-twin engine”. 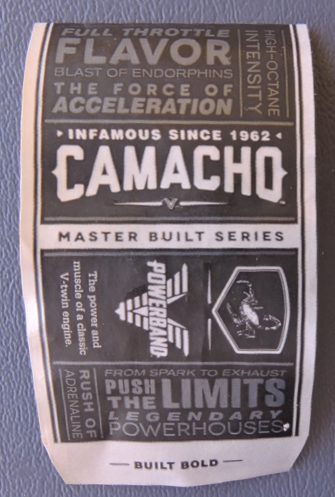 Primary Band of the Camacho Powerband

There is a secondary band that is black with silver font. On it is the silver Powerband V logo. The left side and right side echo the text found on the top component of the primary band.

Secondary Band of the Camacho Powerband

Before lighting up the Camacho Powerband Toro, I went with my usual choice of a straight cut. Once the cap was removed I moved on to the pre-light draw ritual. The dry draw delivered a mix of leather, citrus, and a slight pepper note. Overall I considered this pre-light draw to be satisfactory. At this point, I removed the footer band of the Powerband Toro, lit up the cigar and awaited what the cigar experience would have in store.

The Camacho Powerband Toro kicked off with notes of cocoa, leather, citrus, and red pepper. The citrus and cocoa notes became primary. The leather notes quickly morphed to more of a nut flavor. Meanwhile the pepper notes receded into the background. Later in the first third, some sweet natural tobacco notes also surfaced in the background. On the retro-hale, I found the red pepper to be quite prominent. To a lesser extent there was some cedar present on the retro-hale.

By the halfway point of the Camacho Powerband Toro, the natural tobacco notes worked their way into the forefront joining the citrus and nut flavors. By this point, the cocoa receded into the background – joining the pepper spice. Toward the later part of the second third, the citrus and nut also receded into the background. It was at that point the natural tobacco became the sole primary note. During this stage, the pepper notes began to increase in intensity on the tongue.

When the Camacho Powerband Toro reached the final third, the pepper spices joined the natural tobacco in the forefront. The cocoa, citrus, and nut flavors still made an appearance in the background from time to time. This is the way the cigar experience came to a close. The resulting nub was firm the touch and cool in temperature.

Burn of the Camacho Powerband Toro

With three ligero components, the Powerband has no problems when it came to its burn. The Powerband Toro maintained a straight burn from start to finish. I found a slight amount of jaggedness on the burn line, but this didn’t warrant additional touch-ups. The ash was on the firm side with a nice salt and pepper color. The combustion of this cigar was also excellent as the Powerband Toro had an ideal burn rate and ideal burn temperature.

The draw was not too tight, nor too loose. This made for a low maintenance draw to derive flavors from.

In terms of strength versus body, I gave a slight edge to the strength. At the same time, I found none of the flavors to be sacrificed.

There is no doubt the Camacho Powerband Toro fits very nicely into the Camacho mantra of the “Bold Standard”. While early on, it doesn’t seem like an overly powerful cigar in terms of strength, by the second half, it is evident that this cigar is a powerful one.

This is one of these cigars that needs to be smoked undistracted as it will be easier to pick up the nuances of this particular blend. The flavors weren’t revolutionary, but they were still very good. I also sensed that this cigar could still benefit from some additional age. Given this cigar’s strength, this is one I’d steer toward an experienced cigar enthusiast. As for myself, this is a cigar I’d smoke again and it’s one that is worthy of a box split.