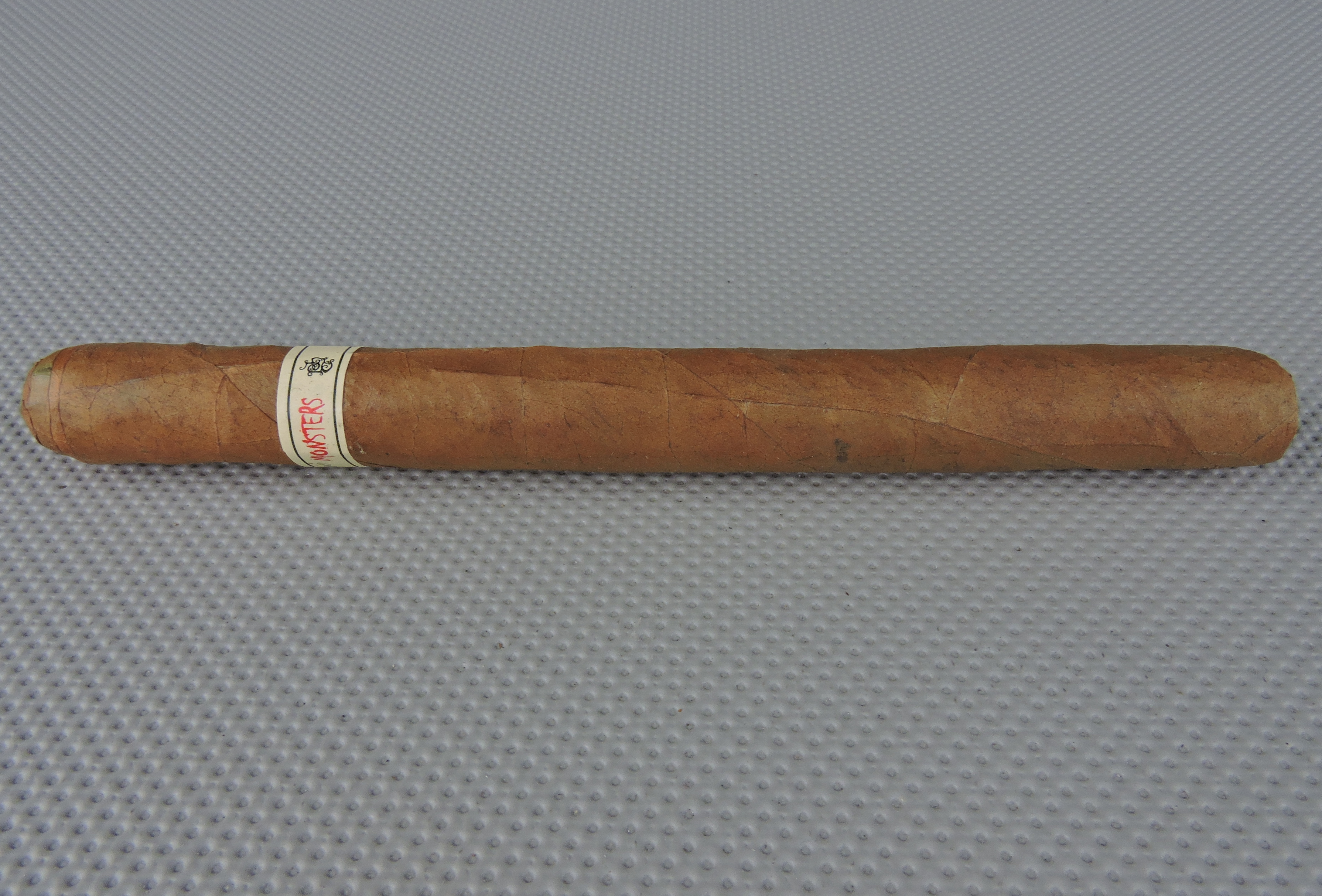 All four of the Monster Series collections are limited in production. Here is some further details

The Skinny Tiff is based off of a character from the horror movie Child’s Play. It is one of two characters from that movie with the other being the Skinny Chuck. Both the Tiff and Chuck have not had a full (i.e. original) Monsters Series size release

Without further ado, let’s break down the Tatuaje Skinny Tiff and see what this cigar brings to the table.

As mentioned, the Tatuaje Tiff is the only cigar in any of the Monster Series collections that uses an Ecuadorian Connecticut wrapper.

The Tatuaje Skinny Tiff’s Ecuadorian Connecticut wrapper has a golden brown color. There are some darker spots.The wrapper itself has a light amount of oil on it. There is a slight rugged look to this wrapper as there are some visible wrapper seams and visible veins.The Skinny Tiff is also finished with a triple cap.

The band is based on the standard “Tatuaje” scripted logo. The script font is black on an antique white background. The antique white background seemed to differ from the Pudgy Tiff’s band that had more of a classic white background. To the left of the “Tatuaje” scripting is the text “SKINNY” in the a bloody style red font. To the right of the scripting” it says “MONSTERS” – also in red font. To the far right is a black Tatuaje “Tattoo” stamp. The band is finished wiht a black pinstripe across the top and bottom

Prior to lighting up the Tatuaje Skinny Tiff, I went with my usual choice of a straight cut to remove the cap. It is worth noting that Skinny Tiff has adelicate wrapper and the cap must be clipped carefully. Once the cap was clipped from the cigar, I moved on to the pre-light draw. The cold draw of the cigar delivered notes of wood and citrus as well as a slight cream and pepper note. Overall this wasn’t the most exciting pre-light draw, but there was no loss of points here because pre-light draw is not factored into the assessment rating or score. At this point I was ready to light up the Tatuaje Skinny Tiff and see what the smoking phase would have in store.

The start to the Tatuaje Skinny Tiff delivered a mix of cedar and citrus on the tongue. There was a slight acidic quality to the citrus for most of the cigar experience. Meanwhile the cedar was also present on the retro-hale.

By the midway point of the first third, some cream notes surfaced and entered into a pattern that saw each of these three notes alternate in intensity. Meanwhile some black pepper entered the equation on both the retro-hale and on the tongue. This pattern contined deep into the second third.

As the Skinny Tiff moved into the latter stages of the second third, the black pepper had made its way into the forefront with the cream and cedar. The citrus flavor diminished significantly.

When the Skinny Tiff reached the last third, there was more in the way of spice with the pepper and cedar notes. The cream and citrus notes were not much more of a factor. This is the way the cigar experience came to a close. The resulting nub was soft to the touch and cool in temperature.

Overall the burn of the Tatuaje Skinny Tiff scored well. The Skinny Tiff maintained a relatively straight path from start to finish. There was a slight curvature on the burn line,  but this was cosmetic in nature and was not a case where additional touch-ups above the norm were needed. The resulting ash was on the firm side with a salt and pepper complexion. As for the burn rate and burn temperature, both were ideal. 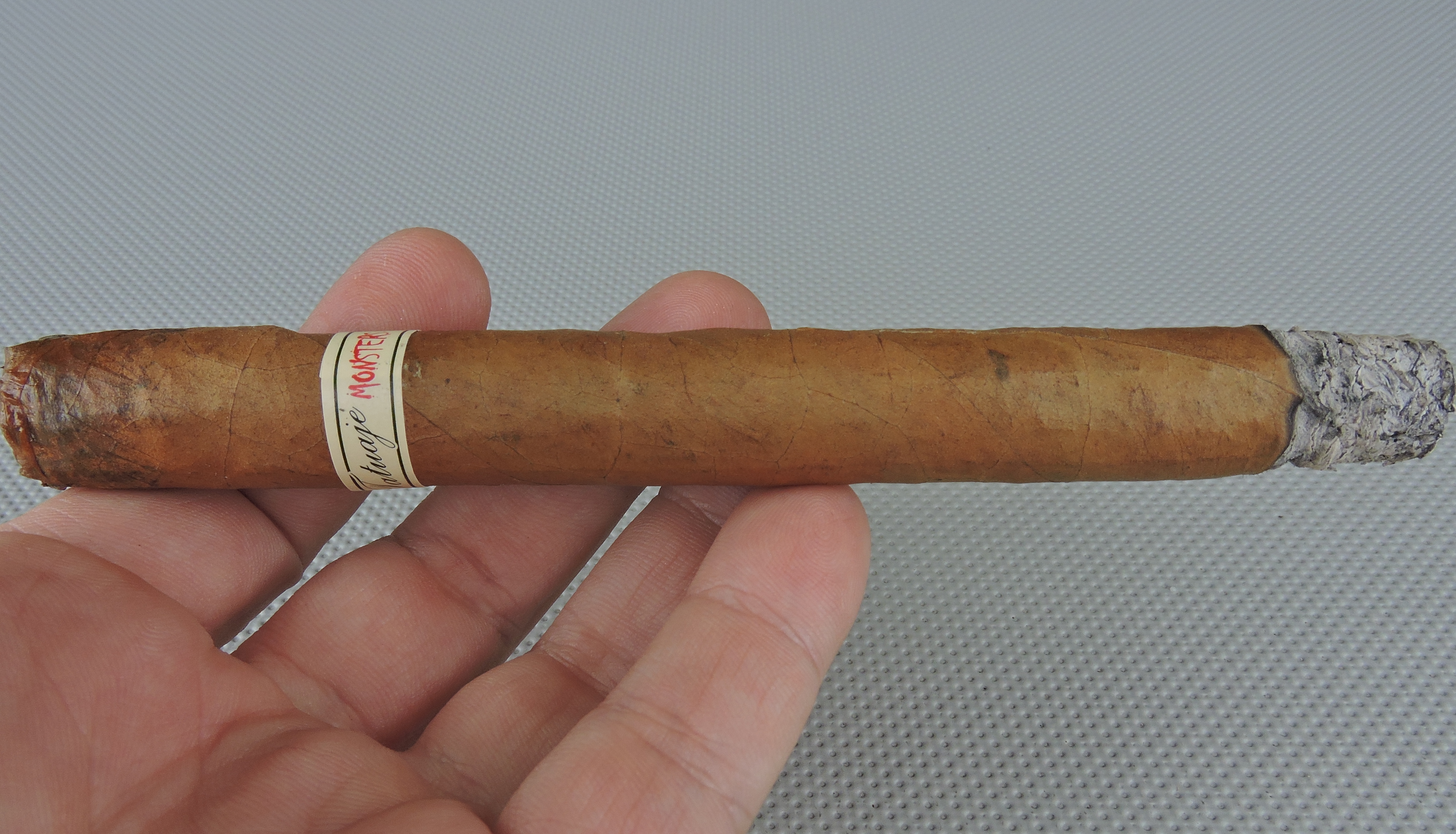 Burn of the Tatuaje Skinny Tiff

As for the Skinny Tiff’s draw, I found it be on the open, but not the loose side (a different experience than Paul had when he talked about the Skinny Tiff on Stogie Geeks). This was a low maintenance cigar to derive flavor from.

When looking at strength versus body, I gave the edge to the body.

The Skinny Tiff is a good case study in terms of the “Cigar Coop / Stogie Geeks” philosophy of “size matters” – namely judging and assessing each vitola on its own. With the Tiff blend, I found it worked much better with the Pudgy Tiff’s Short Robusto format over the Skinny Tiff’s petite lancero format. There are now 31 vitolas offered in the Monster Series collections and not everyone is going to rank #1 on the list. With the Skinny Tiff, this is one that didn’t rank high in my book. The negative on the Skinny Tiff is the acidic quality I got from the citrus notes.

The Skinny Monsters sampler provides a great opportunity to sample all of the Skinny Monster blends and see which cigars in the sampler fit your palate. As for myself, it’s more of a cigar where I would pick one up and see how it responds to some longer term aging.