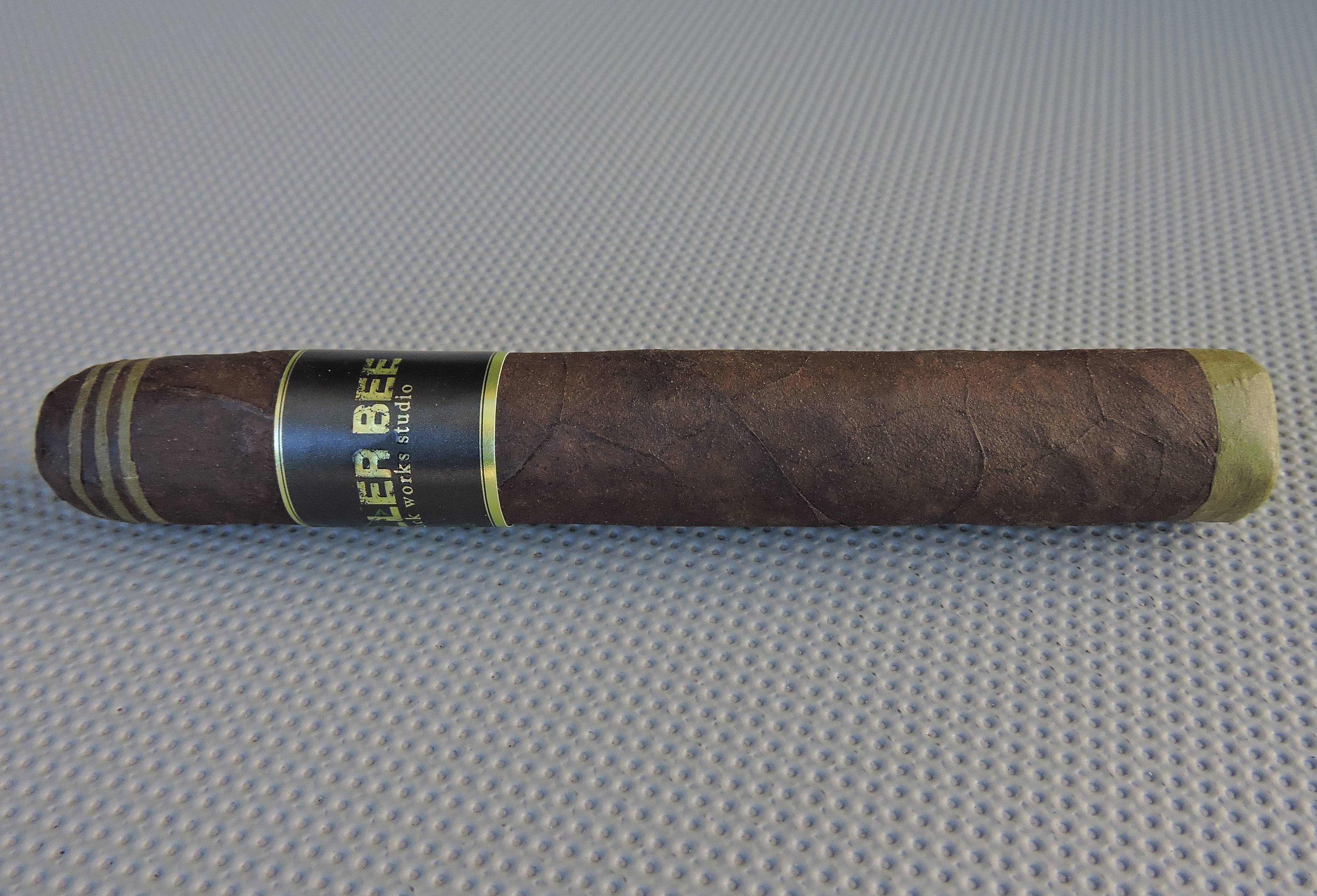 When Black Works Studio was launched, Brown said that he viewed cigar making as an art-form and it provided another avenue from what he is doing as a cigar maker and brand owner. While Black Label Trading Company has a gothic / skull and bones theme, Black Works Studio brings a more contemporary and modern look. The two brands both employ a small batch philosophy in terms of production for all of its releases. Both Black Label Trading Company and Black Works Studio come out of the Fabrica Oveja Negra factory, the boutique factory owned by the principals involved with both brands.

Without further ado, let’s take a closer look at the Killer Bee Green Hornet Robusto and see what this cigar brings to the table.

The Killer Bee Green Hornet is based on the original Killer Bee blend. As mentioned it is a stronger blend and as we will see the candela used will make for a different cigar experience.

The Ecuadorian Maduro wrapper of the Killer Bee has a classic coffee bean color. There is a light coating of oil the surface of the wrapper. Overall this was a smooth wrapper with well-hidden wrapper seams. The cap features what is called a “signature linear cap” which basically has thin candela tobacco rings accenting it. In addition, the Killer Bee features a closed foot of candela that extend about 1/4 inch up the cigar. The candela has somewhat of a weathered look (i.e. it is not the “Kermit the Frog” green). 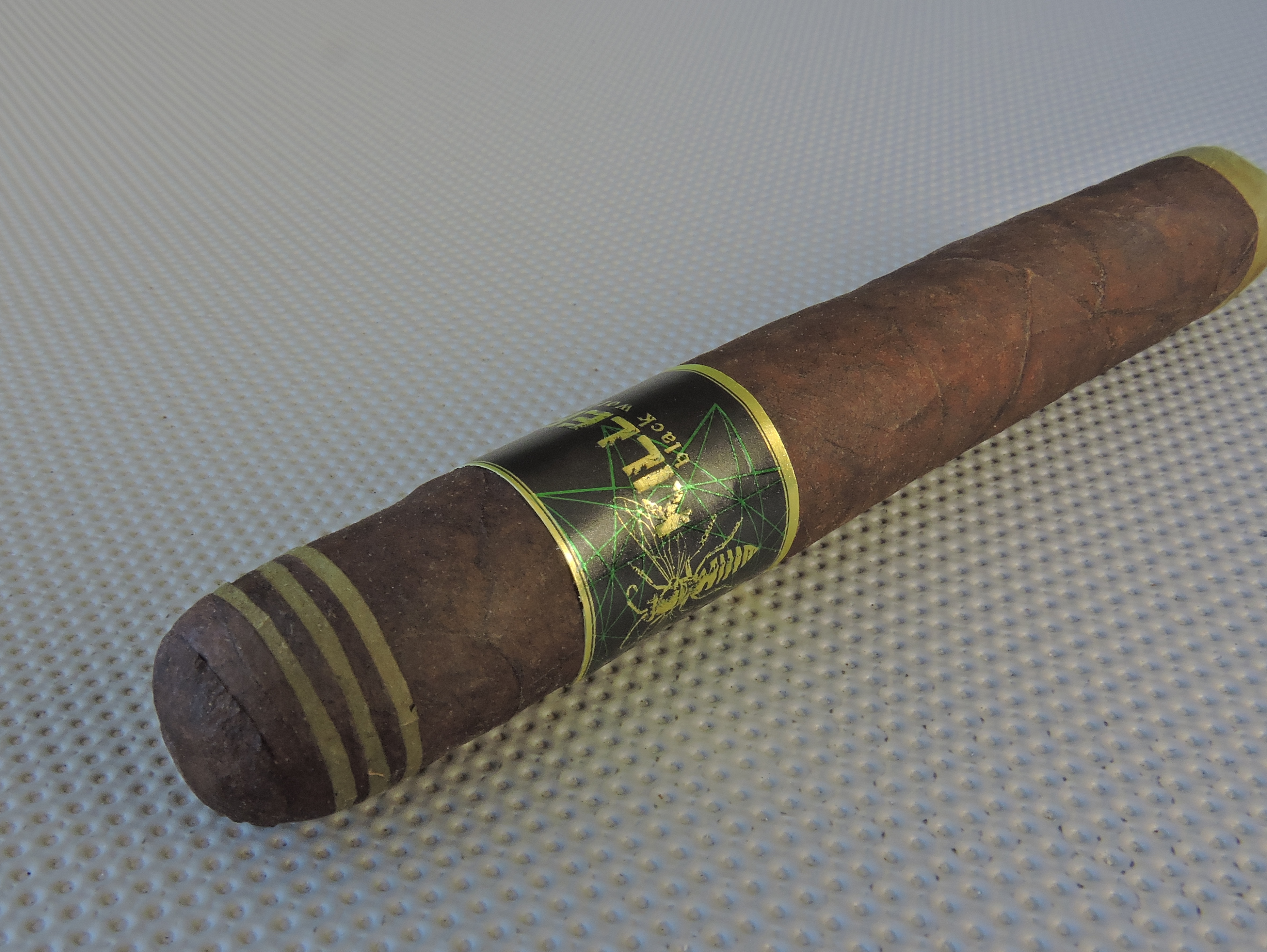 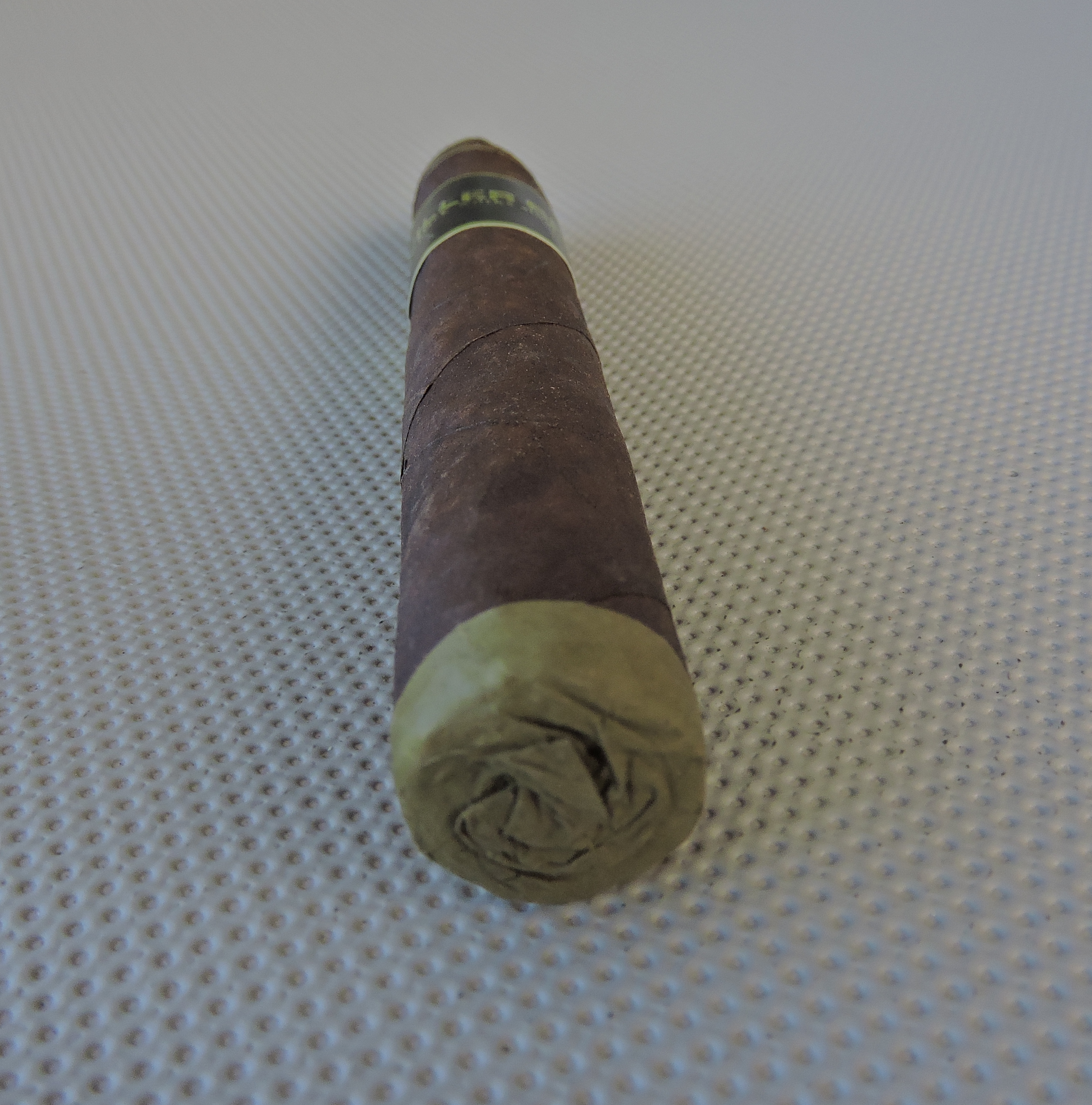 The band to the Black Works Studio Killer Bee Green Hornet is the same as the original Killer Bee offering. The band is black in colored accented with gold trim. The name “KILLER BEE” appears in large gold font. Just below the text is the text “BLACK WORKS STUDIO” in smaller gold font. To the left of the text is a large gold-colored bee sitting on what appears to be a metallic green “hornet’s nest-like” design.

Prior to lighting the Killer Bee Green Hornet Robusto, I went with my usual choice of a straight cut. I was careful each time to place a thin cut and not damage the linear strips around the cap. Keeping these strips was more for cosmetic purposes as I was not anticipating any flavor from the thin candela strips. The dry draw provided a mix of coffee and wood notes. Overall I considered this to be a satisfactory pre-light draw. At this point I was ready to light up the Killer Bee Green Hornet Robusto and see what the cigar experience would have in store.

While I felt the thin candela strips were on Killer Bee Green Hornet Robusto for more artesian purposes, the candela footer was very much another story. This cigar delivered what I call a “candela shot”. This consisted of classic candela notes of white pepper, grass and herb to start. The white pepper was prominent on the retro-hale. These notes were prominent throughout the candela portion of the cigar. Since this was about a 1/4 inch, this candela profile was short.

As the Green Hornet Robusto entered second third, the coffee notes developed some additional richness. The earth notes were still present in the forefront. The pepper and cedar remained in the background. During the this stage, there was a slight chocolate component on the after-draw. Later in the second third, some of the lemon notes that I remembered from the original Killer Bee were also present in the background.

By the last third, the white pepper rejoined the coffee and earth notes in the background. There were still touches of cedar and lemon in the background. The chocolate note on the after-draw had dissipated. This is the way the cigar experience of the Green Hornet Robusto came to a close. The resulting nub was firm to the touch and cool in temperature.

The burn of the Killer Bee Green Hornet Robusto maintained a straight burn path from start to finish. There was a slight amount of jaggedness along the way, but this was a cigar that didn’t require frequent touch-ups. The burn rate and burn temperature were both ideal. 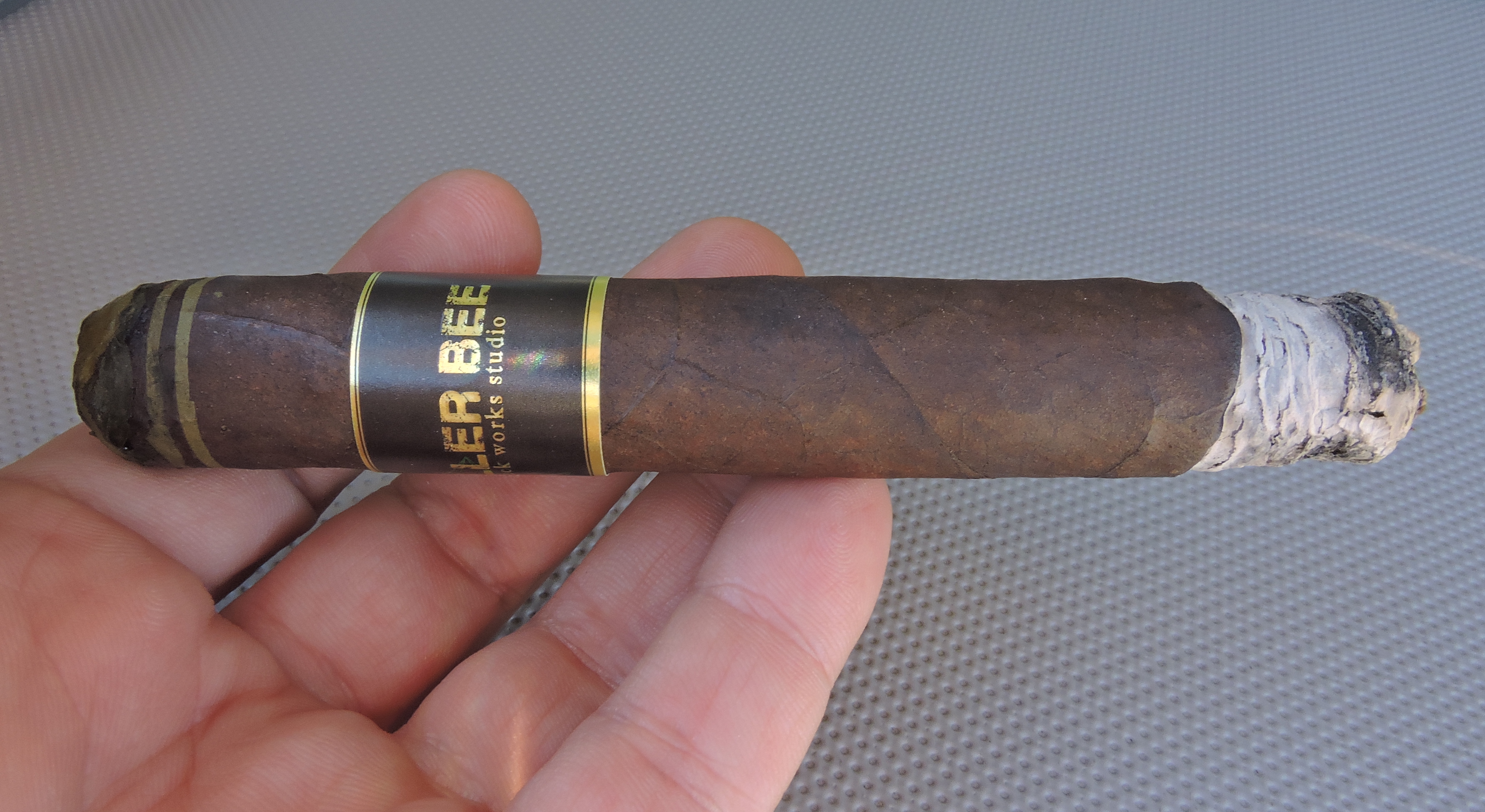 The resulting ash of the Green Hornet Robusto was quite firm. When the cigar burned through the candela closed foot, it was a clean burn and did not have flaking. This ash was darker in color. One the ash reached the maduro portion, the ash became whiter. 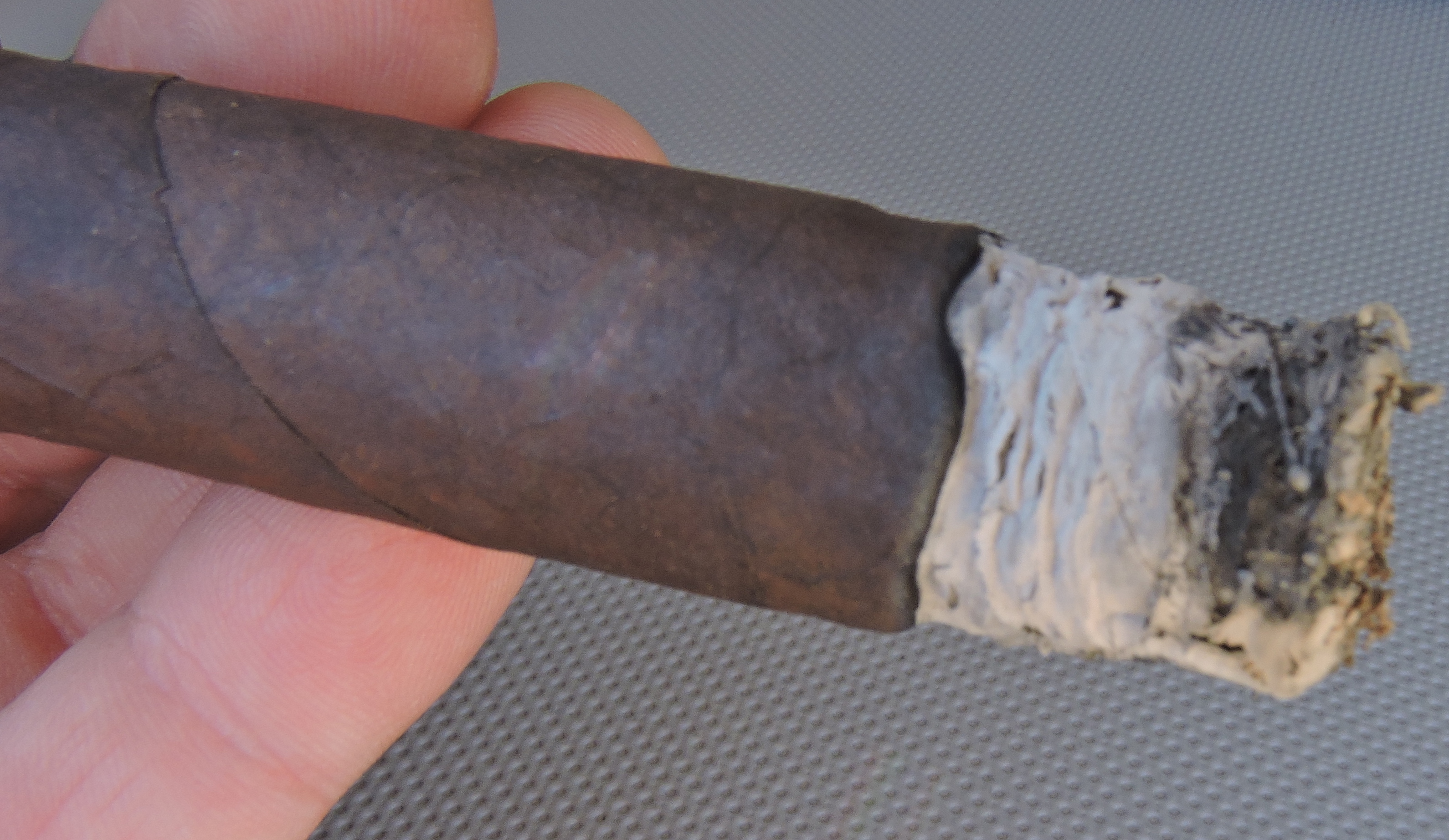 The draw to the Green Hornet Robusto was not too tight, nor too loose. This was a low maintenance cigar to derive flavor from.

Overall I found the strength level of the Killer Bee Green Hornet Robusto started out medium as the cigar burned through the candela portion. By the middle of the first third, the strength increased to the medium to full level and maintained this level for the duration of the smoking experience. Compared to the regular Killer Bee, I definitely found the Green Hornet had some more strength.

In terms of strength versus body, there was an edge to the body early on. Once the cigar reached the maduro phase, I found both attributes balanced each other nicely.

There are two trends that I have been seeing with Fabrica Oveja Negra and the brands being produced by James Brown. I’m seeing a great increase out of the artesian quality of the cigars and releases such as Deliverance, Bishop’s Blend, and Killer Bee are showcasing this. At the same time, the cigars coming out Fabrica Oveja Negra are getting better and better from a blend standpoint. There is no doubt this factory is becoming a player on the boutique market. The Killer Bee Green Hornet validates this.

While some may call the design of the Killer Bee Green Hornet  be somewhat gimmicky, this is not the case. The “candela shot” at the beginning of this cigar is something quite different than I’ve ever had before. In addition, the transition to the maduro section delivered excellent flavor right until the end.

This is a cigar I’d recommend an experienced cigar enthusiast, but its also nice cigar for a novice to graduate to something “medium plus”. As for myself, this is a cigar I’d some again – and it’s one that is box worthy.

« Editor’s Corner Volume 5, Number 11a: Why the FDA Said “No” to Charitable Contributions by Cigar Companies » Cigar News: Two Members of Congress Raise Concerns Over Recent Trade Easements with Cuba