There have been several installments in the Two Guys Smoke Shop Firecracker Series:

In addition, while not branded “Firecracker”, Tatuaje has also made a cigar in a similar format known as the Tatuaje M80.

Without further ado, let’s take a look at the RoMa Craft Tobac CroMagnon Firecracker and see what this cigar brings to the table:

The blend to the CroMagnon Firecracker features the same components found across most of the line:

The following vitolas use what the blend components above. Over the years, CroMagnon has incorporated a wide range of vitolas. Some offerings have been more limited than others.

The Connecticut Broadleaf wrapper of the CroMagnon Firecracker has a classic coffee bean color to it. Upon closer examination, there was some darker marbling on the surface of the wrapper. The wrapper itself had a coating of oil on it. There were some visible wrapper seams and some thin visible veins. The footer to the cigar is covered. The cigar had a nice firm pack to it as there was a lot of tobacco in this little cigar. Finally, one unique feature of the CroMagnon Firecracker is that the extended fuse off the cap  is tucked under the cigar band. 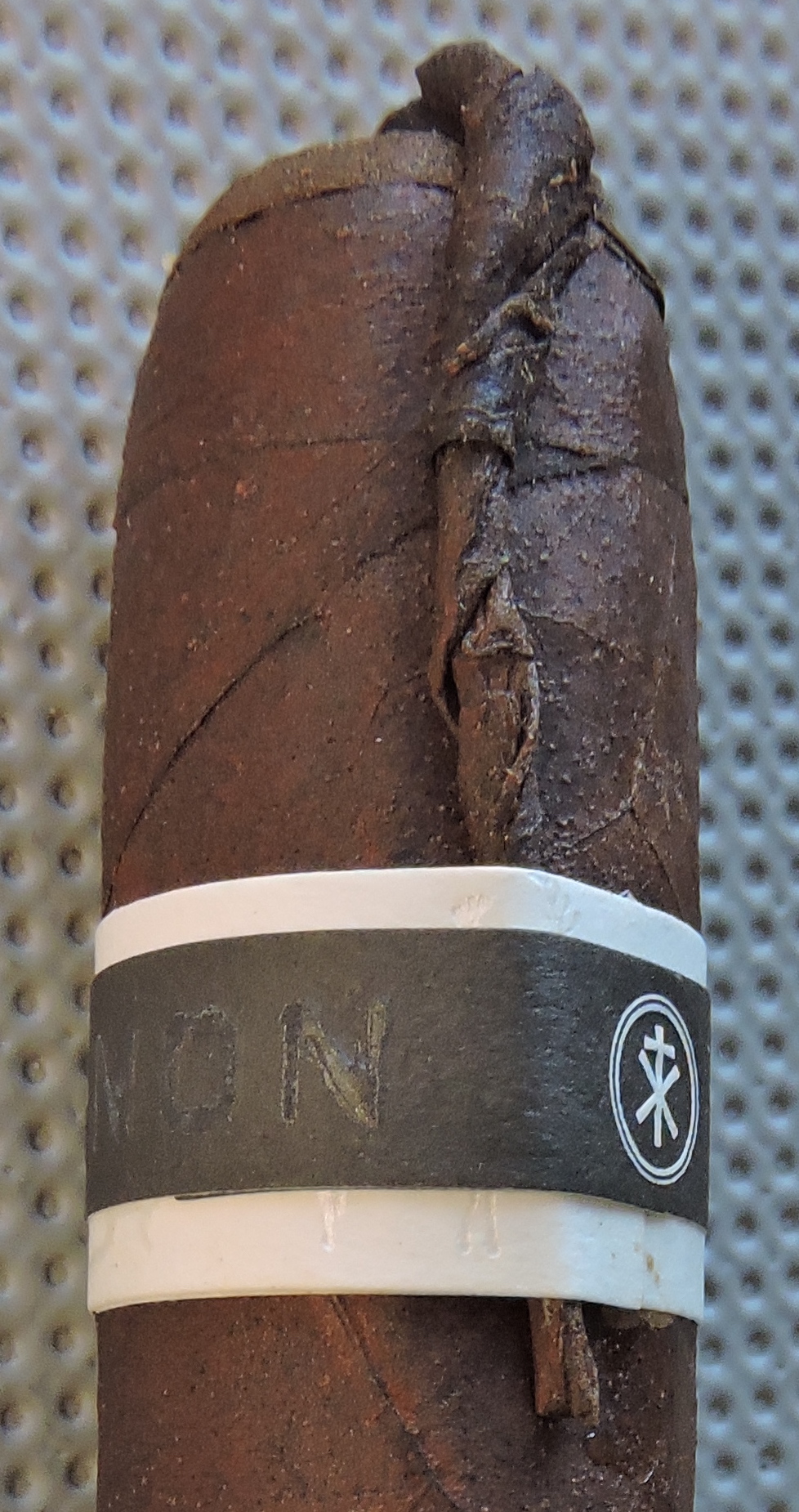 Extended pig-tail of the CroMagnon Firecracker tucked under the band

The CroMagnon Firecracker features the same banding found on many of the other vitolas of the CroMagnon line.  There is a thin charcoal-collared band with the text “CROMAGNON” embossed on it. The back of the band contains the RoMa Craft Tobac logo. The charcoal band sits on top of a thicker white band. The white band containing etching of what could be consider “early modern man”.

The RoMa Craft Tobac CroMagnon Firecracker started out with a quick blast of black pepper. The pepper subsided into the background and gave way to a combination of earth and chocolate notes. Joining the pepper in the background was a slight nut flavor. Meanwhile the black pepper remained quite prominent on the retro-hale.

The earth and chocolate were the primary notes during the first third. By the second third, the earth notes took control. The chocolate, nut, and pepper notes were secondary. I also detected a slight amount of cedar in the background.

During the second half, the earth notes remained primary. The big difference from a flavor perspective was that there was an increase in the pepper spices. From time to time, the chocolate notes still surfaced from time to time. Toward the end, the spices were bolder, but never overpowered the blend. The end of the cigar exhibited no signs of harshness. Each time, the CroMagnon Firecracker cigar finished with a nub that was cool in temperature – and quite firm.

The CroMagnon Firecracker is a well-constructed cigar, but this really isn’t a surprise because RoMa Craft Tobac and its factory, Nica Sueno has done a great job in this area. The CroMagnon Firecracker took a straight burn path from start to finish. There was a slight curvature and a slight amount of jaggedness, but this didn’t much more in additional touch-ups. The silver colored ash was tight and firm, coming off the cigar in clean chunks. The burn temperature was ideal. Overall, I found this to be a slower burning cigar as each smoke still took me about 45 to 50 minutes. Ultimately, there were no adverse effects of the slower burn and it did a great job at extending the smoking experience.

In terms of strength and body, I found this to be a bolder cigar, but not an overpowering cigar. The CroMagnon Firecracker started out with medium to full strength. This level holds for the first two thirds. The last third saw the strength level cross the threshold into full territory. Comparing this to other RoMa Craft Tobac  smokes, this cigar didn’t come near the strength level of RoMa Craft Tobac’s Neanderthal HN.  In fact, I found the Don Pepin Garcia Blue Firecracker also had more in the way of strength.

Body-wise, I found the CroMagnon Firecracker to be a medium-bodied smoke. The flavors aren’t going to weigh very heavy on the palate. When looking at strength versus body, I gave an edge to the strength.

CroMagnon is the brand under RoMa Craft Tobac that started it all for the company. Before there was a RoMa Craft Tobac, there was a CroMagnon (made by RoMa Craft’s predecessor, Adrian’s Cigars). Over the years, RoMa Craft Tobac has grown the CroMagnon to have a variety of vitolas and there seems to be one for everyone. The fact that the CroMagnon blend can work in everything from a 3 1/2 x 50 vitola to a massive 10 x 133 1/3 is nothing short of incredible. With 15 offerings, some vitolas are going to be better than others. Is it the best size in the line? No. For me the Blockhead, Mode 5, and Knuckle Dragger are superior offerings. That being said, the CroMagnon Firecracker was still an enjoyable cigar. It’s just that some of the other CroMagnon cigars have more in the way of richness and complexity. Ultimately, this size is a bolder cigar, so I’d recommend it to a more-experienced cigar enthusiast. As for myself, it’s still a fun cigar to have in your collection. I’m not sure its worth the manhunt one would have to make to track down this size, however if you can it’s still certainly worthy of picking up a fiver of them.