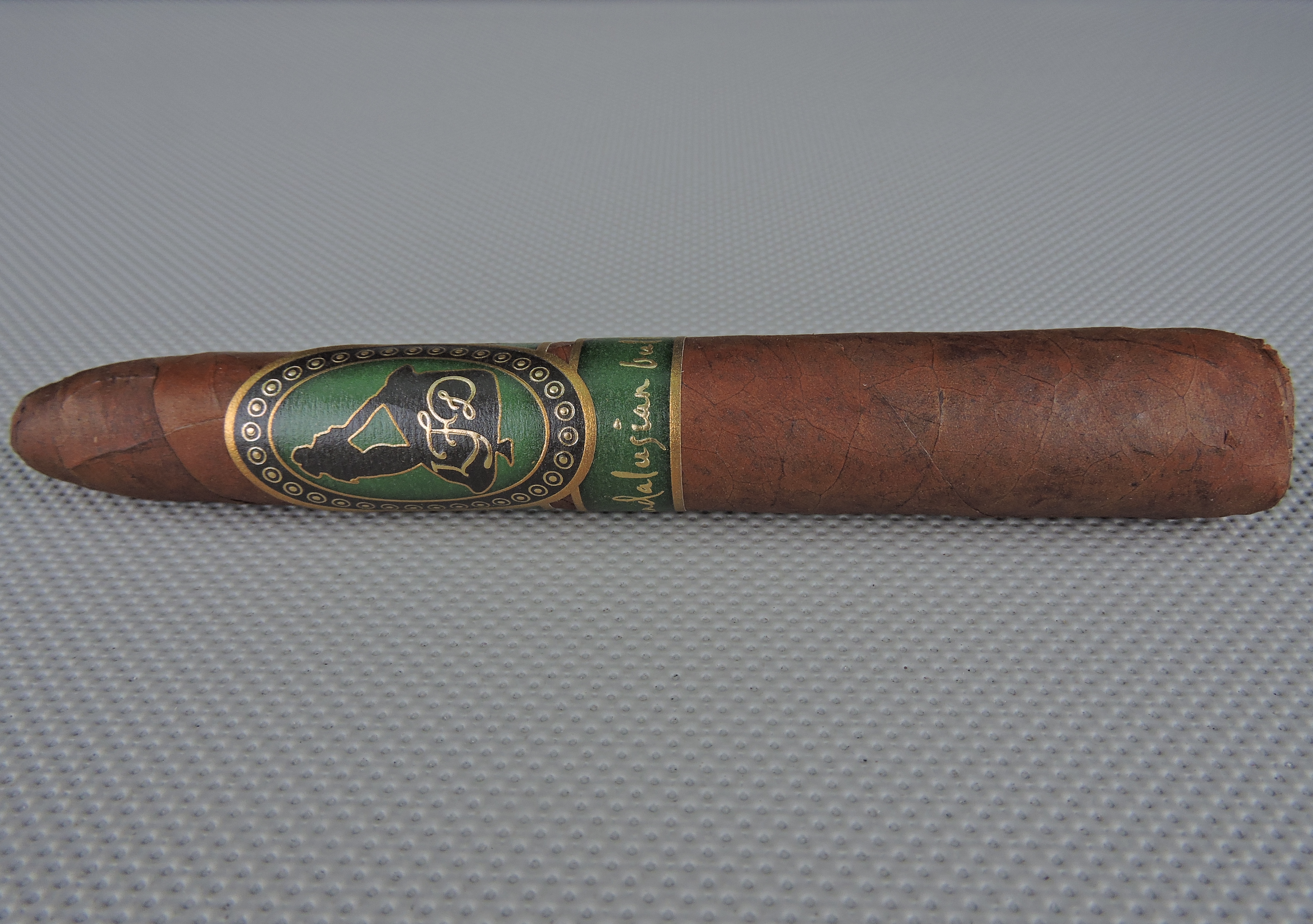 The Andalusian Bull made its way to retailers in the Fall of 2016 and it did not take long for the cigar to make history. Toward the end of 2016, the cigar captured Cigar Aficionado’s Cigar of the Year award  – something considered the cigar industry’s highest honor. La Flor Dominicana has said the Andalusian Bull is a done in limited production batches. After receiving the award, it was no surprise that demand spiked for this cigar. As a result, at press time this has become quite a difficult cigar to find in many retailers.

Without further ado, let’s take a closer look at the La Flor Dominicana Andalusian Bull and see what this cigar brings to the table.

The Andalusian Bull consists of a Corojo wrapper from Ecuador over an all Dominican blend that includes Criollo 98 and some Pelo de Oro.

The La Flor Dominicana Andalusian Bull is available in one size – a 6 1/2 x 52 x 64 figurado. This figurado almost has the look of a Salomon with about 3/4″cut off at the footer.

Gomez used an old cigar mold he found in Belgium as the basis to make this size. The cigar is packaged in ten count boxes. 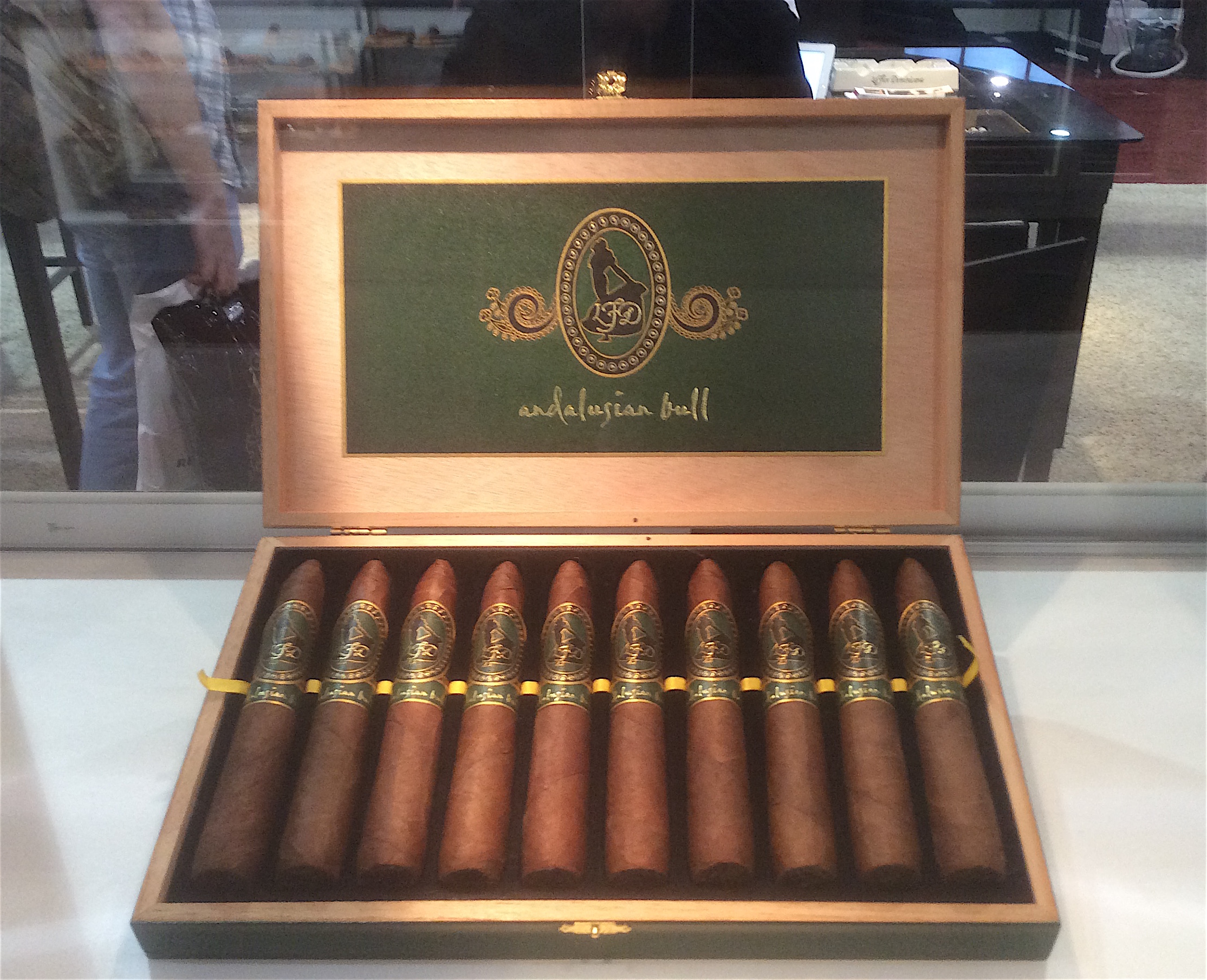 The Ecuadorian Corojo wrapper of the La Flor Dominicana Andalusian Bull has a rich mahogany color with some darker marbling. There is also some oil on the surface. Overall I found this cigar had a smooth wrapper. Most of the wrapper seams were well hidden, but there were some visible veins. The figurado is gently tapered toward the cap while the footer has a short, but slightly sharper taper.

The banding to the Andalusian Bull is new to La Flor Dominicana. The primary band is green with gold trim. On the center of the and is a large oval design. A silhouette of a matador is on the center of the oval. Draped over the matador is a gold LFD script logo. A black and gold ring surrounds the silhouette design. There are also gold adornments going around on the ring surrounding the oval.

The secondary band rests just under the lower portion of the oval on the primary band. It is also green with gold trim. The text “andalusian bull” is draped across this band in a gold cursive font.

Prior to lighting up the Andalusian Bull, I went a straight cut to remove the cap. My objective was to keep to maximize as much of the tapering as I could. I then moved on to the pre-light draw experience. The dry draw delivered a mix of natural tobacco and graham cracker. I didn’t find this to be an overly complex dry draw, but it still was quite satisfying. At this point I was ready to light up the Andalusian Bull and see what the smoking experience would have in store.

The start to the Andalusian Bull delivered a mix of white pepper, natural tobacco, and graham cracker notes. As the cigar moved through the tapered section by the footer, I found the natural tobacco notes became primary. The graham cracker and pepper notes moved into the background. On the retro-hale, I picked up a mix of assorted pepper spices.

Throughout the first third of the Andalusian Bull, the natural tobacco notes had a nice mesquite component mixed in. Meanwhile, I still picked up the graham cracker and pepper notes. During this stage, a savory note emerged. I don’t like picking strange flavor notes out of left field, but this one was almost like a sweet beet with some spice mixed in.

During the second third, the natural tobacco notes remained primary. I found the mesquite and graham cracker notes moved in and out of the forefront. The savory (beet-like) note was still present, but as the Andalusian Bull entered the second half, this note diminished.

By the last third of the Andalusian Bull, the pepper-spice notes joined the natural tobacco in the forefront. The mesquite notes were still very much present. The savory and graham cracker notes were nearly dissipated. While I loved the uniqueness of the first two thirds of this cigar, the last third was more average. As the Andalusian Bull came to a close, the resulting nub was slightly soft to the touch and cool in temperature.

Overall the La Flor Dominicana Andalusian Bull’s burn performed well. There was some jagged-ness on the burn line from time to time, but this was remedied with some touch-ups. At the same time, the Andalusian Bull maintained a straight burn path and was never in danger of tunneling nor canoeing. The resulting ash had a silver gray color to it and was slightly on the looser side. The burn rate and burn temperature were both ideal. 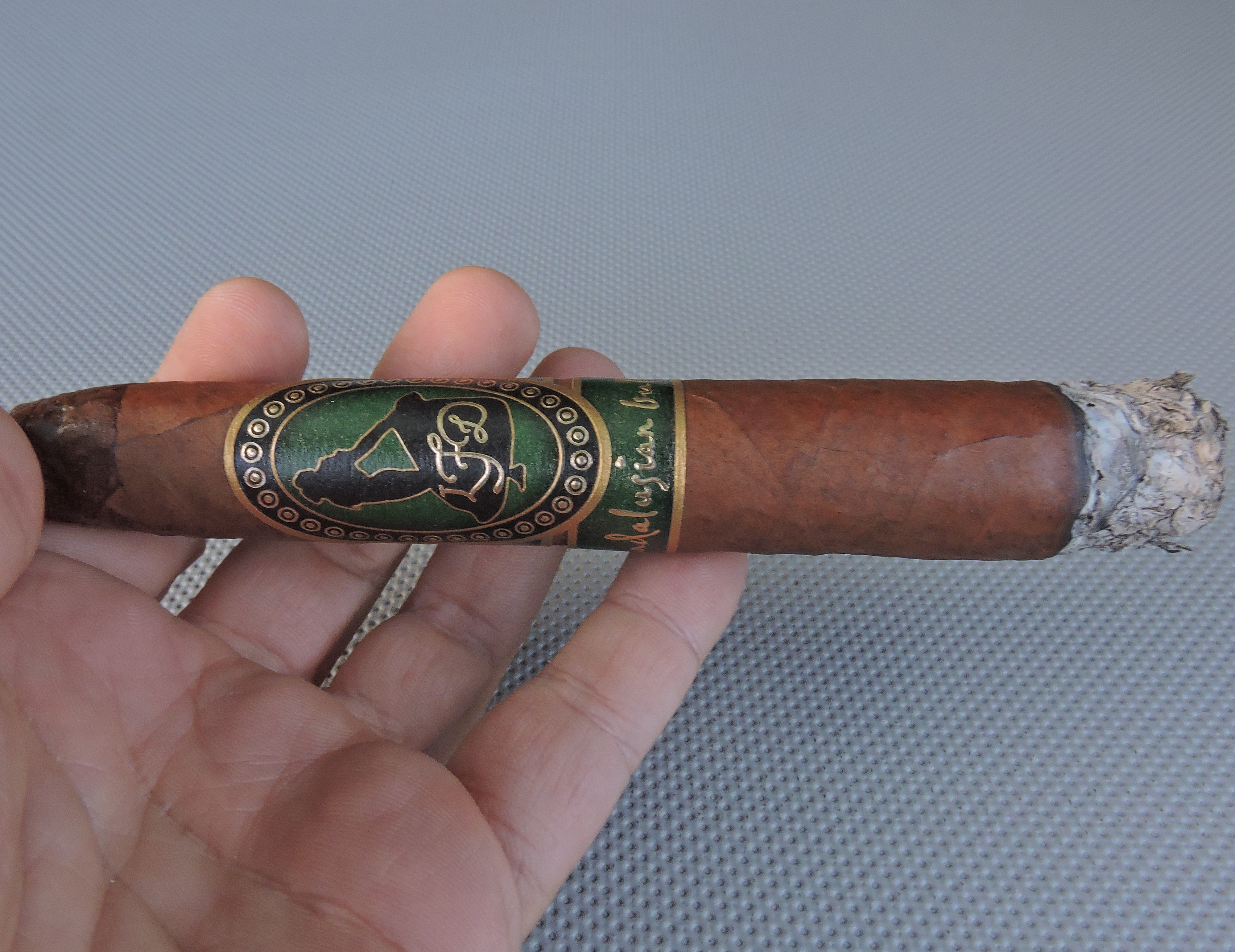 Sometimes you cannot judge a book by its cover. When I first looked at this cigar, I was expecting a looser draw. This was definitely not the case. I found this cigar had an exceptional draw – with the resistance level was near perfect. The tapering by the cap helped mitigate the impact of smoking a big ring gauge cigar. Overall, the Andalusian Bull was a very enjoyable cigar to puff on.

Again, I will apply the not judging a book by its cover analogy. Given La Flor Dominicana’s reputation for bold and powerful smokes and the fact that this cigar has the name “Andalusian Bull”, I was expecting a very bold smoke. Once again, this was not the case. Overall I found this to be a medium strength, medium to full-bodied smoke from start to finish. In the end, I found the level of strength and both meshed well with the flavor profile.

2016 was a banner year for La Flor Dominicana. Even if Andalusian Bull didn’t garner the Cigar Aficionado ranking, I still would have had said La Flor Dominicana had a great year. The Andalusian Bull is an enjoyable cigar. It looks different, and it smokes different. As I said up front, it’s a great representation of the artistry and innovation coming out of La Flor Dominicana. Is it the best cigar out of La Flor Dominicana in the past couple of years? That’s a judgment call, but personally I still have the Small Batch No. 6 and TAA 48 cigars ahead of it. Still this is a cigar I’d recommend. It’s one I would gear toward an experienced cigar enthusiast. It’s a nice cigar for a novice to try something different – and one who wants to graduate to a “medium plus” cigar. As for myself, it’s one I would smoke again – and it’s worthy of a box split.