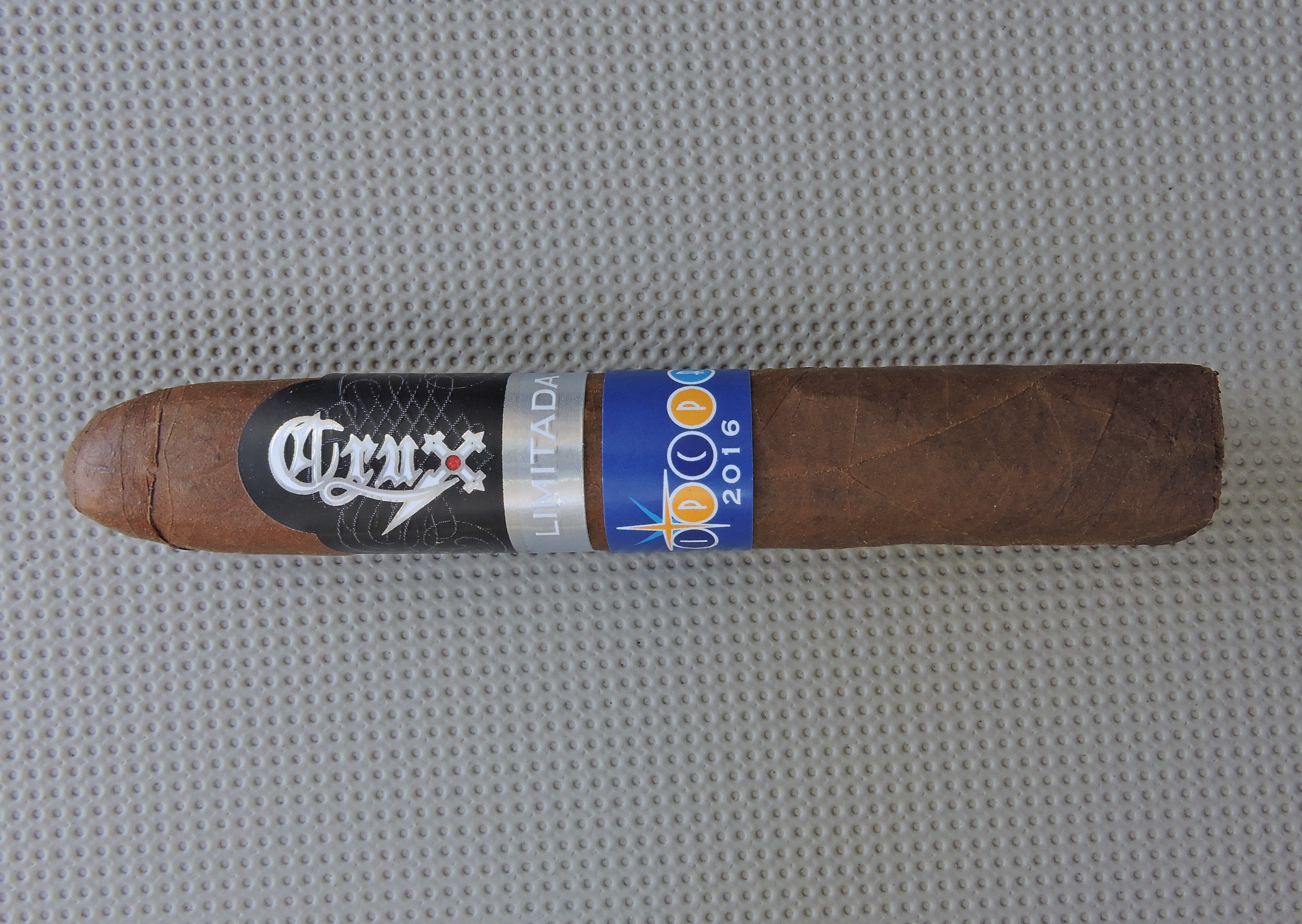 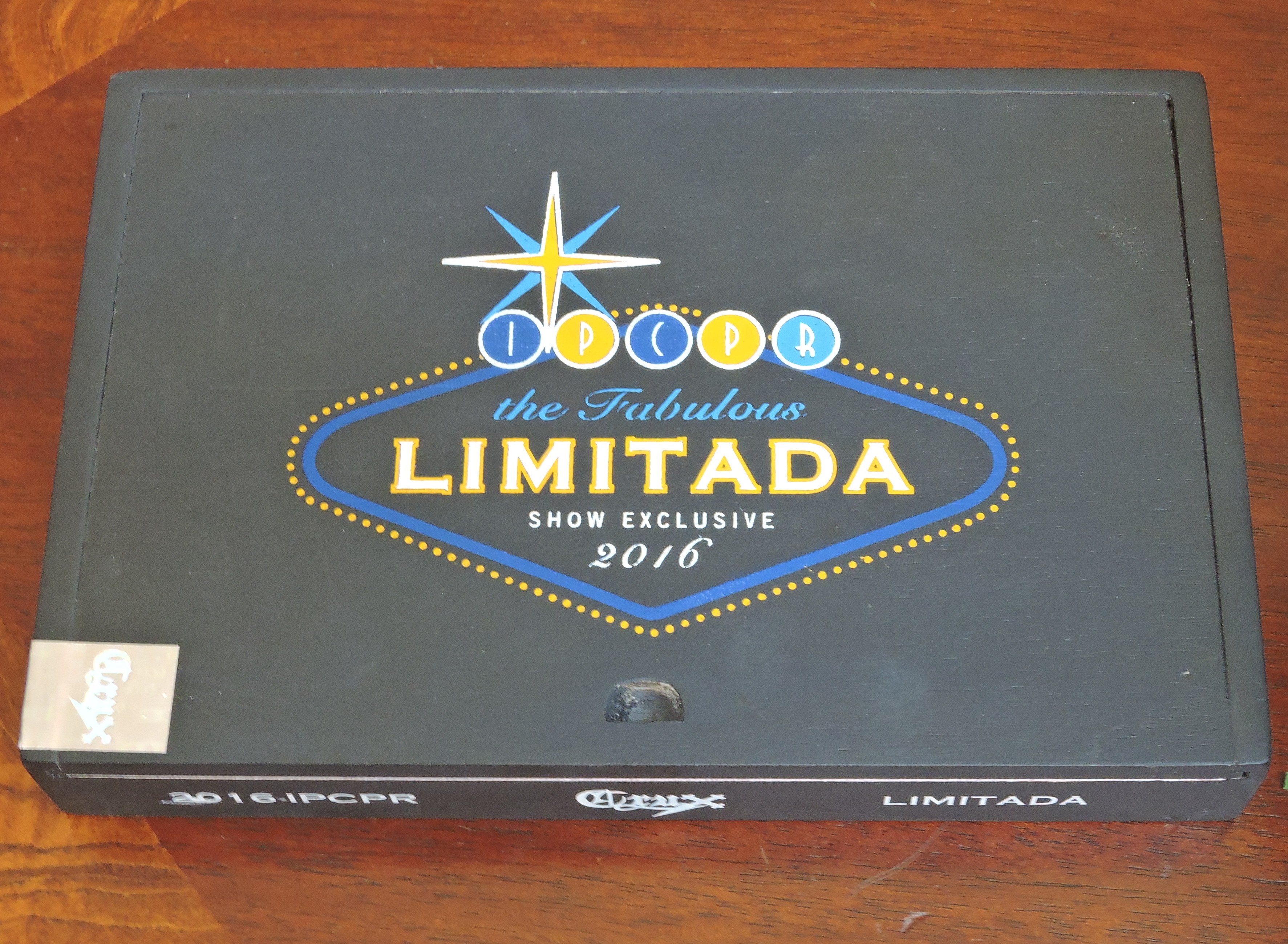 On a side note, the Crux Limitada Show Exclusive 2016 was the selection of Prime Time Host Aaron Loomis on Developing Palates as his #1 ranked cigar for 2016.

The Crux Limitada Show Exclusive 2016 will be made in one size – a 5 x 52 box-pressed Robusto Extra that will feature Crux’s signature Marblehead cap. This is a rounded cap based on the famed Cuban 109 vitola. The cigars are packaged in 10 count boxes. 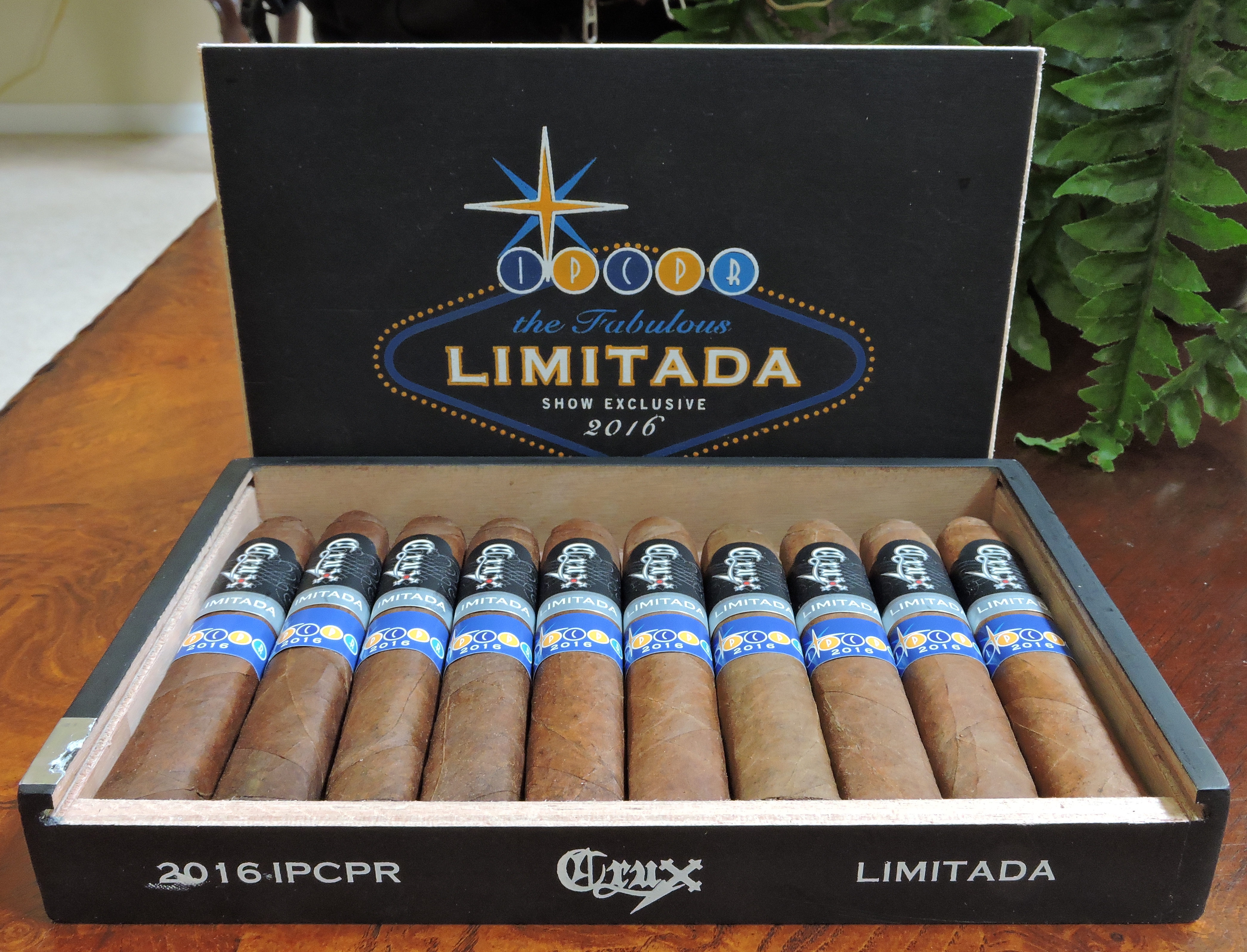 The Crux Limitada Show Exclusive’s Engañoso wrapper has a medium brown color with a colorado red tint. The wrapper has a slight sheen of oil on the surface. This is a wrapper that I would categorize as smooth. There were some thin visible veins, but the wrapper seams were well hidden. The Marblehead cap has a short taper like a belicoso, but with a flat head. The box press of the Limitada Show Exclusive is what I categorize as a Cuban style “soft box press”.

There are two bands on the band to the Crux Limitada Show Exclusive 2016. The primary band is black on the upper portion and silver on the lower portion. In landscape mode is the white and red Crux logo on the black background section. There are also some silver designs on this portion of the band. On the far right of the band (going around the back) is a black, white, and red “crusader-like” dagger. On the silver portion is the text “LIMITADA” in white font (not in landscape mode).

The secondary band rests below the primary band. It is blue in color with the “IPCPR” in Vegas-style lights. Toward the bottom of the band is the text “2016”in white font. 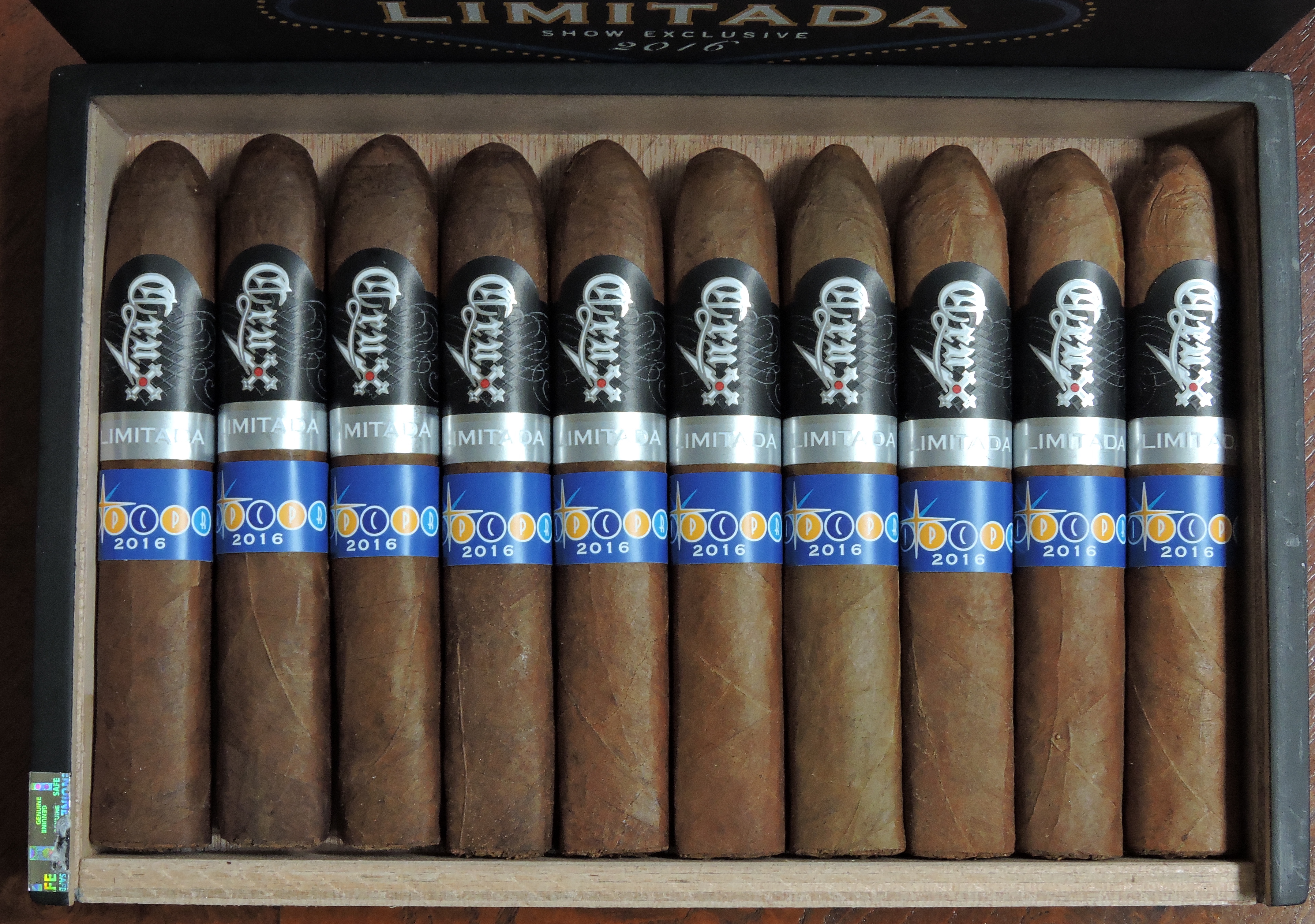 Prior to lighting the Crux Limitada Show Exclusive 2016, I went with my usual choice of a straight cut. The Marblehead Cap has a flat surface, but I opted to make a slightly deeper cut than I normally do. This allowed me to get a little more area to draw, while at the same time I was able to take advantage of the tapering. Once the cap was removed, I proceeded with the pre-light draw. The dry draw delivered a mix of coffee bean, a slight amount of sweet fruit, and a subtle tingly spice on the tongue. Overall, I considered this to be an excellent pre-light draw. At this point, I was ready to light up the Crux Limitada Show Exclusive 2016 and awaited what the smoking experience would have in store.

During the second third, some earth notes joined the coffee bean notes in the forefront. There still very much was a creamy texture to the flavors. In the background, the fruit note now took on more of a sweet citrus profile. At the same time, the white pepper had changed to a black pepper on both the tongue and the retro-hale. I found the black pepper began to increase on the tongue.

During the latter part of the second third, the coffee and earth notes remained in the forefront. The creamy texture started to diminish greatly. The black pepper now was a close secondary note while the citrus and cedar remained more distant.

By the last third, the earth notes remained as a primary note. The coffee notes receded back joining the pepper and cedar in a complementary role. The citrus notes were distant but still provided a slight bit of sweetness. This is the way the cigar experience came to a close. The resulting nub was firm to the touch and cool in temperature.

The Crux Limitada Show Exclusive was a well-constructed cigar and this reflected nicely on the score for burn and draw. This cigar maintained a straight burn path and had a relatively straight burn line. The resulting ash was firm with a silver-gray color. The burn and temperature were ideal. 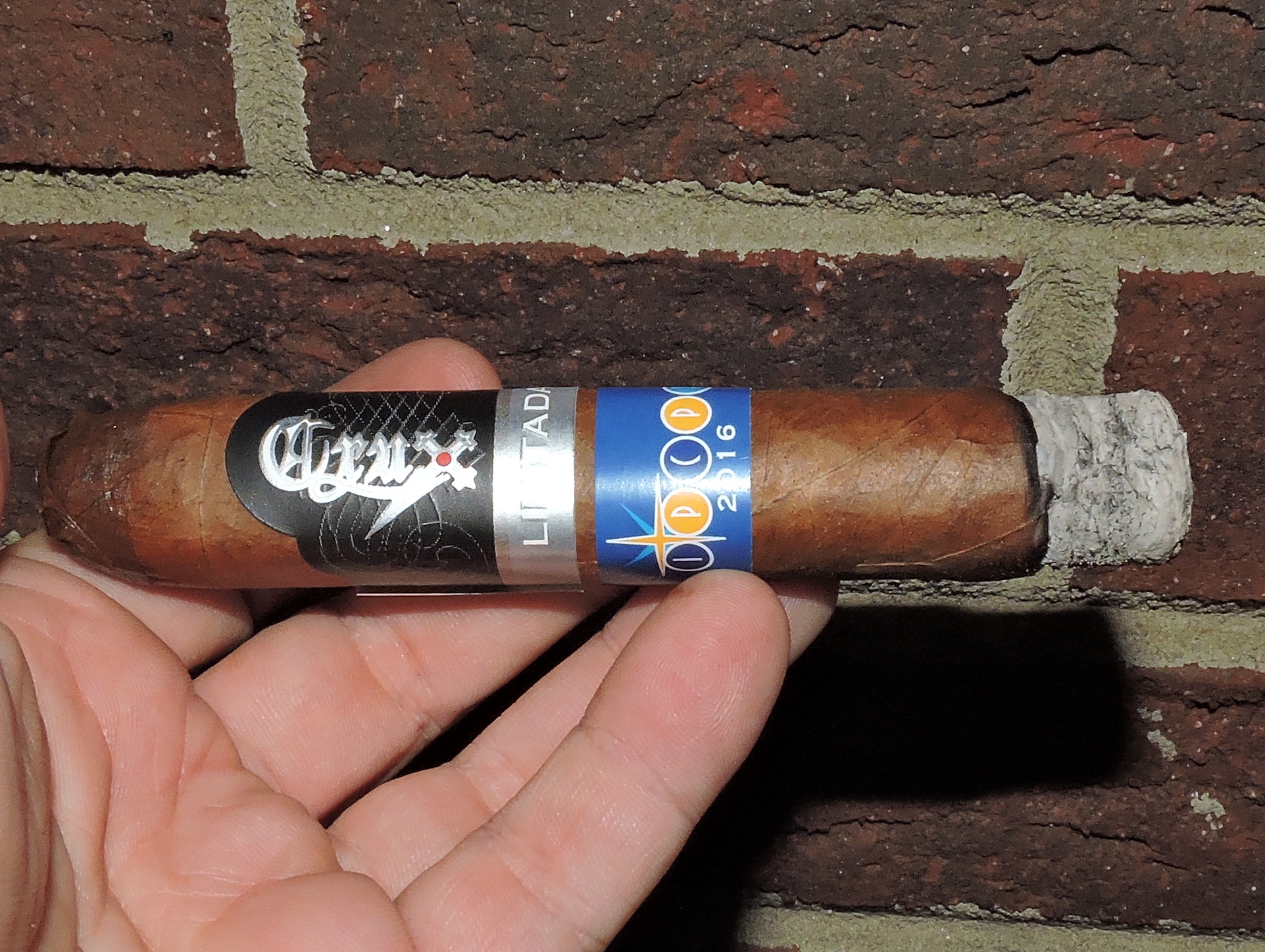 The draw to the Crux Limitada Show Exclusive 2016 was a touch looser than I prefer on a box press. This is not to say it was a bad draw, it was just a little more open than I prefer. In the end, I had no problems deriving flavor from the cigar, nor did the open draw ever put this cigar in danger of burning warm.

The strength and body of the Crux Limitada Show Exclusive 2016 started out on the upper end of medium. Both attributes did increase gradually and linearly throughout the smoking experience. By the second half, the strength and body hit the medium to full mark. There still is a gradual increase in both attributes, but both remained in the medium to full spectrum to the end.

The strength and body both balanced each other out nicely with neither attribute overshadowing the other.

There is one problem with the Crux Limitada Show Exclusive 2016 – it is too short!  I wish there was one extra inch on this cigar because this is another home run from Crux. In all seriousness, the 5 x 52 robusto performed excellently. I loved the flavors delivered from this cigar.  I’ve smoked several of these over the past few months, and aging continues to be very kind to this cigar. Given this is a limited cigar, if you can find this cigar – you will want to get your hands on it. This is a cigar I would recommend to an experienced cigar enthusiast, but it’s also a nice one for the novice to move into the medium/medium plus range. As for myself, this is a cigar that I would not only smoke again and get a box of, it’s one worthy of fighting Chuck Norris for.