Pier 28 Premium Cigars is a company owned by Tim Wong. Wong is the West Coast Territory Manager for Espinosa Premium Cigars. In 2016, he took a step into brand owner as he worked with Espinosa Cigars’ La Zona factory to release Pier 28 Premium Cigars. Pier 28′ first release was the Pier 28 Habano which made its debut at the 2016 IPCPR Trade Show. Last year, Wong unveiled his second release, the Pier 28 Maduro. Today our focus will one on the Pier 28 Habano in the Corona Gorda size. Overall, I found this cigar to be an excellent offering and one that continues to showcase why La Zona Cigars has been our Small Factory of the Year award winner for the past three years.

Originally, the Pier 28 Habano started out as a cigar intended for Wong’s territory he covers at Espinosa Cigars. This includes the states of California, Arizona, Washington, Oregon, and New Mexico. It also was a cigar that was made available to Espinosa Cigar lounges. Since its release, Wong has begun the transition to make the Pier 28 Habano a national brand. The same approach is currently in progress for the Pier 28 Maduro.

Without further ado, let’s break down the Pier 28 Habano Corona Gorda and see what this cigar brings to the table.

Pier 28 was launched in four sizes. These sizes are packaged in ten-count boxes. 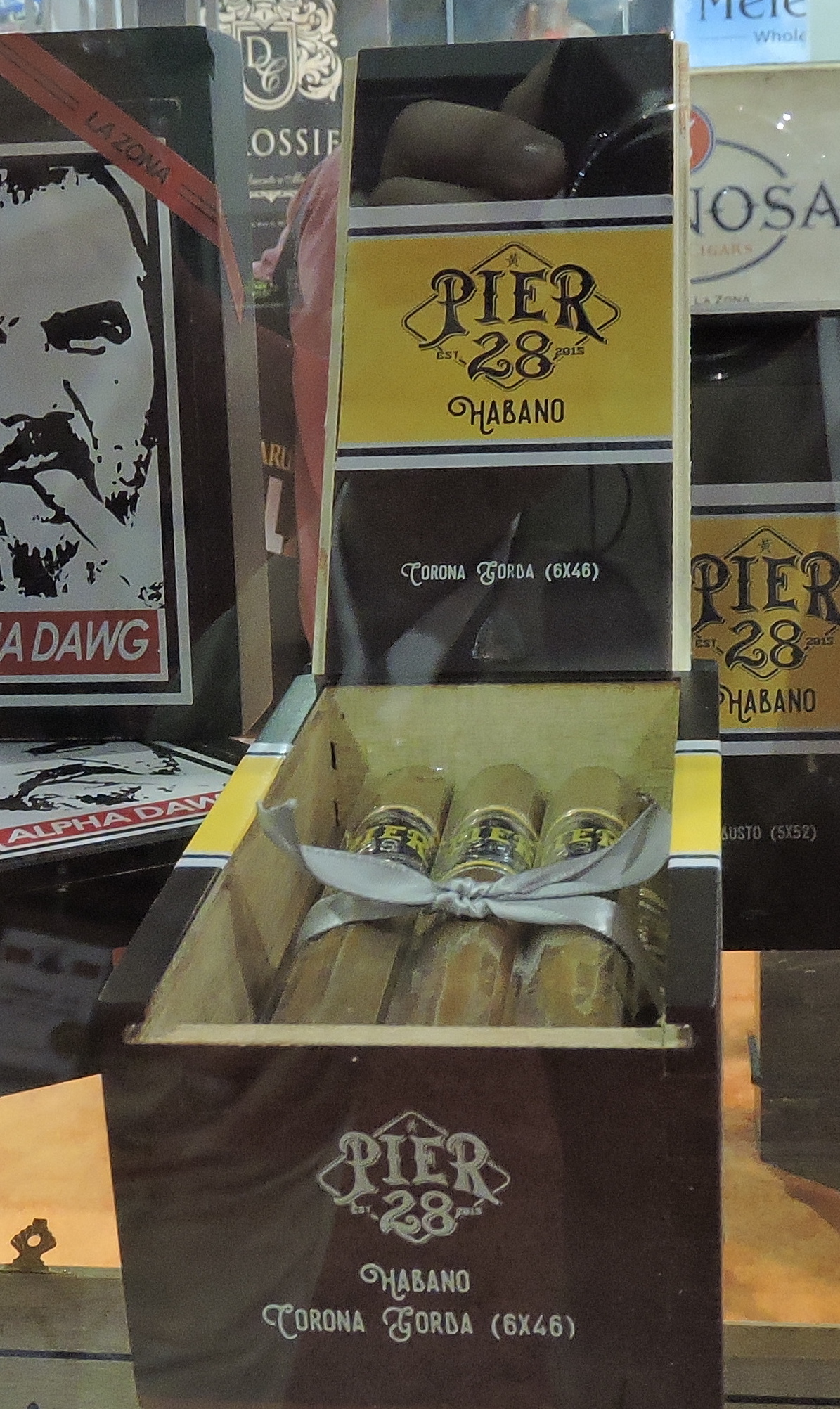 There are several additional sizes planned for the Pier 28 line. This includes a lancero (which at press time, Wong has said on social media is on the near horizon. There are also talks of adding a petite corona, torpedo, and a 5 1/2 x 70 vitola known as the Egg Roll.

The Pier 28 Habano Corona Gorda’s Habano wrapper had a medium brown color with a nice rosado tint to it. There was a very light coat of oil on the surface. There were some visible veins on the wrapper’s surface. Any visible wrapper seams were minimal.

I opted to commence the cigar experience for the Pier 28 Habano Corona Gorda with a straight cut to remove the cap. Once the cap was clipped, I moved on to the pre-light draw. The cold draw delivered a mix of tea, wood, and mixed fruit. Overall I found the pre-light draw experience of this cigar to be satisfactory. At this point, I was ready to light up the Pier 28 Habano Corona Gorda and see what the smoking experience would have in store.

The start to the Pier 28 Habano Corona Gorda delivered a mix of black tea, mixed fruit, wood, and a touch of red pepper. As the cigar moved through the early part of the first third, the tea and fruit notes settled in the forefront while the wood and red pepper notes settled in the background. Meanwhile, the retro-hale produced an additional layer of black pepper.

By the time the Pier 28 Habano Corona Gorda reached the second half, the fruit sweetness had diminished into the background leaving the natural tobacco and earth notes primary. The tea, wood, and pepper notes remained in the background, but the pepper component was now increasing.

The final third of the Pier 28 Habano Corona Gorda saw the wood notes join the natural tobacco and earth notes in the forefront. By this point, the increase in the pepper notes leveled off. There were still some touches of tea and fruit notes present. This is the way the cigar experience of the Pier 28 Habano Corona Gorda came to a close. The resulting nub was cool in temperature, but slightly soft to the touch.

From a burn perspective, the Pier 28 Habano Corona Gorda had a slight amount of curvature on the burn line, but overall the burn maintained a straight path. As a result, there was not an excessive amount of touch-ups required throughout the smoking experience. The resulting ash was firm with a salt and pepper color to it. Meanwhile, the burn rate and burn temperature were both ideal.

The draw to the Pier 28 Habano Corona Gorda performed excellently. The draw had a touch of resistance to it. At the same time, there was an abundant layer of smoke produced by this cigar. Overall, these are all both things I like in a draw.

Strength-wise I found the Pier 28 Habano Corona Gorda performed at a medium level. Meanwhile, the body of this cigar was in the medium to full range. There was a slight increase in intensity of both attributes along the way, but in the end the Pier 28 Habano remained in medium strength, medium to full-bodied territory. In terms of strength versus body, I found the body had a significant edge over the strength throughout the smoking experience.

The Pier 28 Habano line has been one that I have been impressed with. It’s a nice debut series for Tim Wong’s company. These cigars not only have excellent flavor, but the complexity level has kept me quite interested from start to finish. Hector Alfonso Sr. and the La Zona team continue to do a lot of great things with the Habano wrapper and the Pier 28 Habano Corona Gorda is another great example. This is a cigar I would definitely recommend to either an experienced or novice cigar enthusiast. As for myself, it’s a cigar that I would smoke again – and it’s certainly worthy of box purchase consideration.