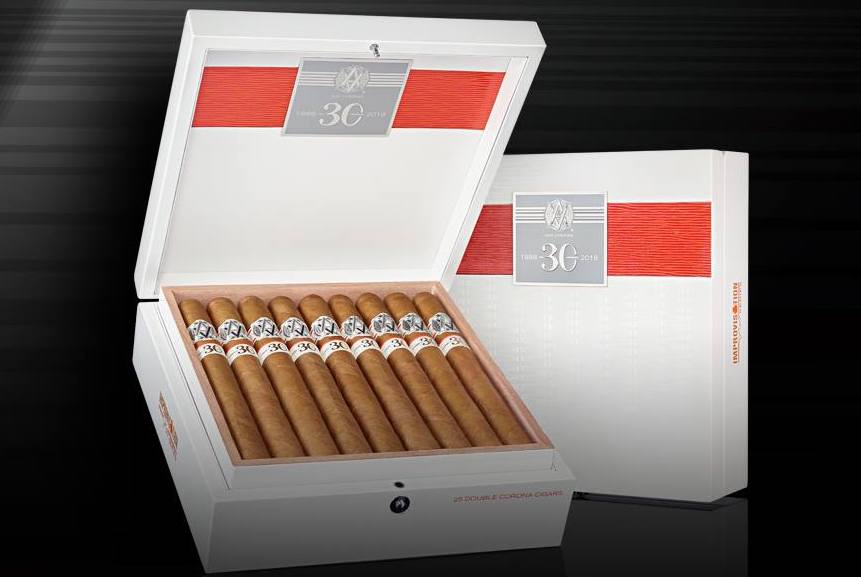 In 1988, Avo Uvezian would partner with Henke Kelner to release his own brand of cigars. Now 30 years later, the brand commemorates three decades in the cigar business with a series of releases that includes a new blend, the return of some old favorites, and some special collector’s edition packaging.

The releases are planned to be staggered throughout the year to celebrate the 30 Year Anniversary.

The announcements around the AVO 30 Year Collection were made on a Facebook Live broadcast in conjunction with halfwheel.com.

Kicking off the Thirty Year Celebration will be the sixth installment of the AVO Improvisation Series – the AVO 30 Years Improvisation.

The AVO 30 Years Improvisation will be a 7 1/2 x 50 Double Corona (the same size as the AVO Classic No. 3). The cigar will be available in 25-count white boxes. It will be a one time release with an allocation of 2,400 boxes. The box texture resembles the weave to Avo’s hat and has an orange strip that resembles his linen suits.

The cigar will be released this March – coinciding with Uvezian’s birthday, which was March 22nd).

The line is returning with the original blend and original sizes. The sizes include Robusto (5 x 50), No. 2 (6 x 50), No.3 (7 1/2 x 50) and Piramides (7 x 54). The cigars will have updated packaging that includes plexiglass tops and updated cigar bands that include the updated AVO logo from 2015 on the primary band and a secondary 30th-anniversary band.

Another line discontinued when the AVO brand was revamped in 2015 was the AVO Signature. This line will also be returning for a limited run.

The AVO Signature comes back in the original blend which features an Ecuadorian wrapper over Dominican binder and filler. It is coming back in three sizes: Robusto (5 x 52), Double Corona (7 x 50), and Belicoso (6 x 48).

Production will be limited to 1,500 boxes per size. The release is planned sometime this summer around the time of the IPCPR Trade Show.

One of the most storied limited editions released in the AVO series is making its first comeback in 13 years as the AVO LE05. The 2005 installment of the AVO Limited Edition is returning for a limited run.

In 2014, AVO re-released all of its limited editions from 2001 to 2014 as a part of AVO’s Greatest Hits, but at the time the AVO LE05 was not included in the series. Henke Kelner and Eladio Diaz had not been able to get the blend up to par with when it first was released. Since then, the duo has got the blend to a point where they deem it can be re-released. This time it returns with the same components, featuring an Ecuadorian wrapper over Dominican binder and filler.

While the original release of the AVO LE05 was unbanded, the 2018 re-release o will include bands. This includes the updated AVO logo from 2015 as the primary band and the 30th anniversary secondary band. There will also be new packaging. The cigars will be packaged in 20-count boxes with a plexiglass top. The cigars will be distributed to retailers in a tray of the five boxes. A total of 300 trays will be produced.

The re-release of the AVO LE05 is planned for this September.

Also returning for a limited run is the 2002 AVO Limited Edition release, the AVO 22.

The AVO 22 was originally released in two figurado sizes – a 5 7/8 x 50 one for the U.S. market and a 5 7/8 x 43 version for the European market. It is the U.S. version of the AVO 22 that is returning. The cigar will feature the same Ecuadorian Sun Grown wrapper over Dominican binder and filler.

Consistent with what is being done for the return of the AVO LE05, the previously unbanned AVO 22 will receive banding. This includes the updated AVO logo from 2015 as the primary band and the 30th-anniversary secondary band.

The re-release of the AVO 22 is planned for the June timeframe.

The Toro sizes of each of the three blends of the AVO Syncro series (AVO Syncro Nicaragua, AVO Syncro Nicaraqgua Fogata, and AVO Syncro South America Ritmo) will have a limited release featuring commemorative packaging. The blends will remain the same as the original, but each will receive a special box design as well as the 30th-anniversary footer band. A total of 1,000 boxes of each size will be made available. These will be released later in the year in time for the end of the year.