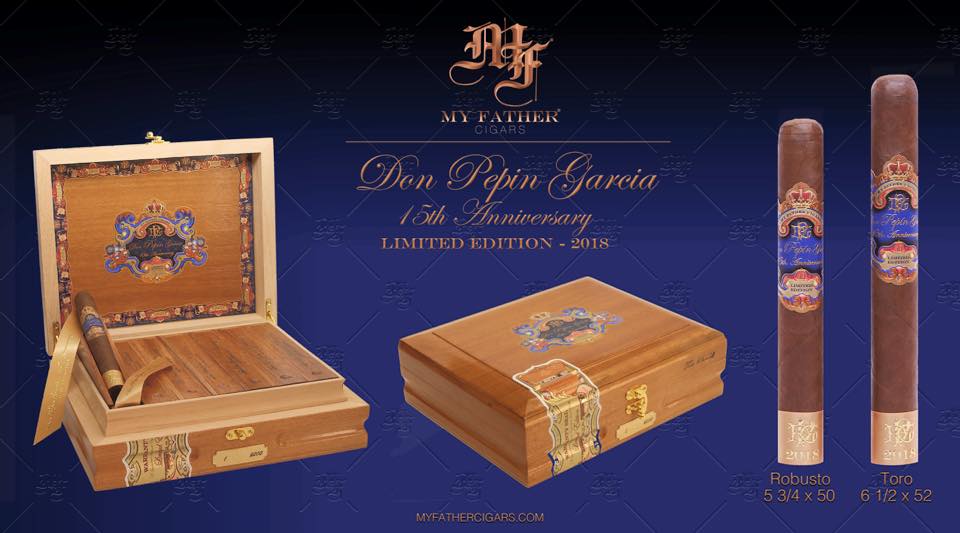 My Father Cigars has announced its 2018 limited edition release. This year it pays homage to the 15th anniversary of when company patriarch Don Pepin Garcia first opened up his factory in Little Havana. The cigar is appropriately called the Don Pepin Garcia 15th Anniversary Limited Edition.

The cigar utilizes a variant of the Don Pepin Garcia Blue Label banding. It features a 100% all Nicaraguan blend highlighted by a Nicaraguan Habano Rosado Oscuro wrapper. Cigar Aficionado reported some Pelo de Oro in the blend – which is something that has been a staple of each of the annual limited edition cigars by My Father. The Don Pepin Garcia 15th Anniversary comes in the 6 1/2 x 52 Toro that has been a staple of the annual My Father Limited Edition line. However, for the first time, the annual limited edition will feature a second size – in this case, a 5 3/4 x 50 Robusto.

Both sizes will have each cigar packaged in individual coffins with 14 coffins per box. Cigar Aficionado reports the total production of the Don Pepin Garcia 15th Anniversary will be 2,000 boxes per size. The publication is also reporting a mid April, 2018 release.

For completeness, here is a list of the My Father Limited Editions:

At a glance, here is a look at the Don Pepin Garcia 15th Anniversary Limited Edition 2018