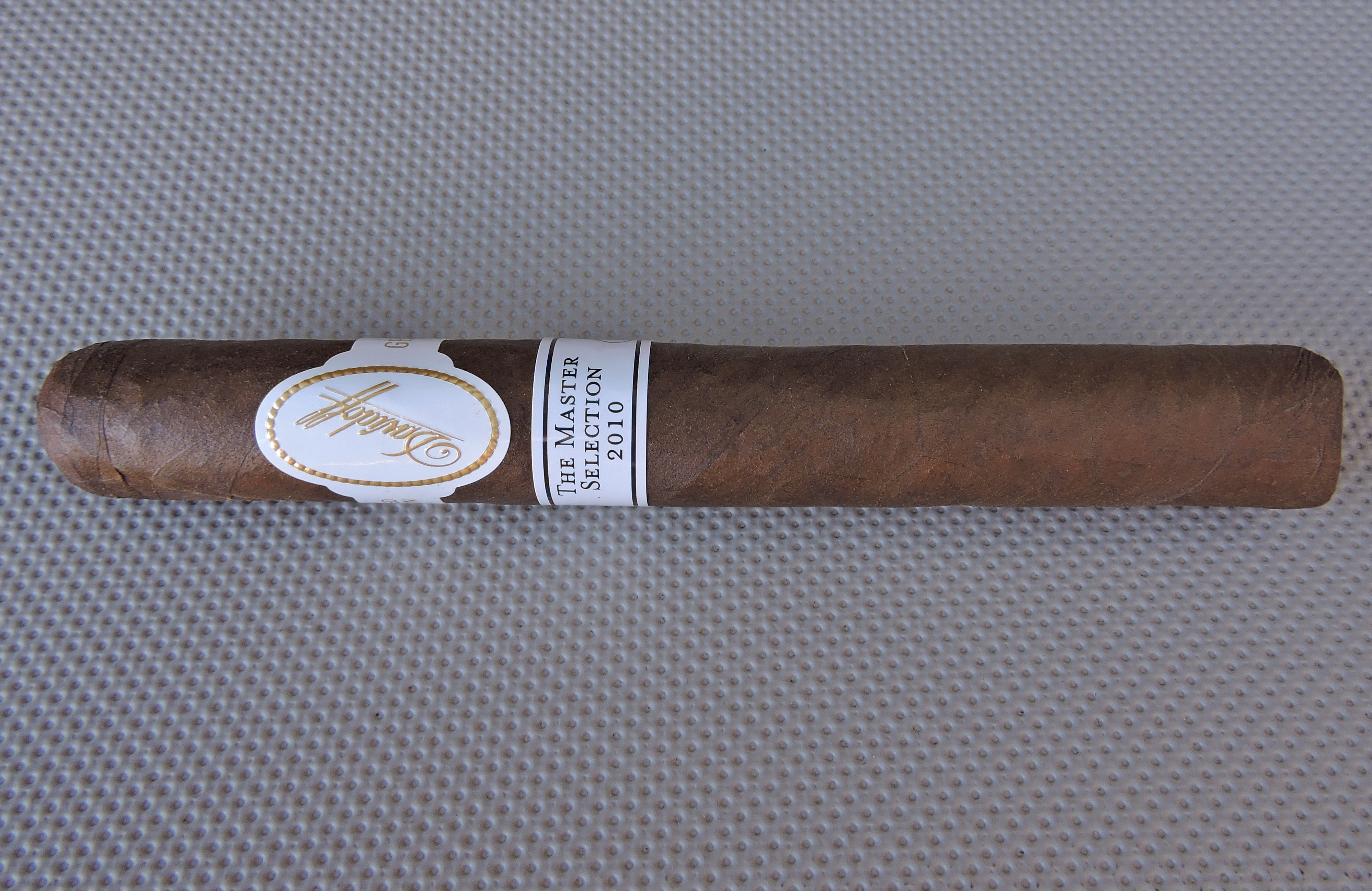 Three of the cigars in the series were made available to Davidoff’s Appointed Merchants while the other three were made available to Davidoff’s company-owned Flagship stores. Davidoff staggered the release of these blends throughout the summer of 2017, releasing two of the cigars at a time – one to the Appointed Merchants and one to the Flagship stores. The cigars in the series are:

Without further ado, let’s break down the Davidoff Master Selection 2010 and see what this cigar brings to the table.

The Dominican wrapper of the Davidoff Master Selection 2010 was on the darker side. It had a chocolate brown color to it. There was a nice sheen of oil on the wrapper. There were some visible veins and on a couple of the samples, there was an occasional toothy effect from the vein. Any visible wrapper seams were on the thin side.

There are two bands on the Davidoff Master Selection 2010 cigar. The first band is similar to the classic Davidoff White label. It features the name “Davidoff” in classic cursive gold-colored font on an oval field of white. There are small gold circles going around the perimeter of the oval. The word “GENEVE” (in gold font) flanks to the right of the oval field. To the left of the oval, is the text “LIMITED EDITION” in gold font.

The secondary band is also white in color. There is a black pinstripe near the top of the band, as well as one toward the bottom of the band. On the center of the band is the text “THE MASTER SELECTION 2010” – also in white font. The right side of the band what appears to be Eladio Diaz’s signature.

My experience of the Davidoff Master Selection 2010 started with a straight cut to remove the cap. Once the cap was clipped, I moved on to the pre-light draw phase. The dry draw produced a mix of chocolate and nut along with a touch of natural tobacco sweetness. Overall, I considered this to be an excellent pre-light draw. At this point, I was ready to light up the Davidoff Master Selection 2010 and experience the smoking phase.

The Davidoff Master Selection 2010 started out with more notes of cocoa powder, nut, and natural tobacco sweetness. I also picked up a mix of cedar and black pepper. Early on the cocoa powder and nut flavors moved to the forefront. This combination had an underlying creamy texture to it. Meanwhile, the cedar, natural tobacco, and black pepper moved into the background. These background flavors rounded out the flavor profile with the right amount of sweetness (from the cedar and natural tobacco) and spice (from the cedar and background pepper). Meanwhile, there was a subtle layer of red pepper on the retro-hale that was present throughout the smoking experience.

The last third of the Davidoff Master Selection 2010 didn’t have much change in the flavor profile. While the natural tobacco was still in the forefront alternating with the cocoa and nut flavors, the cocoa flavors seemed to have the edge. The cedar was a close secondary note with the pepper note further back. This is the way the cigar experience of the Davidoff Master Selection 2010 finished up. The resulting nub was firm to the touch and cool in temperature.

From a burn standpoint, the Davidoff Master Selection 2010 maintained a relatively straight burn path. There was some jaggedness from time to time on the burn line, and this did result in some additional touch-ups from time to time. The resulting ash wasn’t overly firm, but it wasn’t loose or flaky either. This was an ash that was gray in color with some darker spots mixed in. The burn rate and burn temperature were both ideal.

This is the fourth of the six Davidoff Master Selection cigars I have assessed (the 2007 and 2008 are still to come). What I have liked about this series is that each of the six blends greatly differs from the other cigars in the series. While I would have liked to have seen a little more in the way of complexity on this blend, I did find the flavors delivered on this cigar were very good – and that was enough to win me over. I also found the cigar’s medium strength and medium body meshed quite well with the flavor delivered.

This is a cigar I could recommend to any cigar enthusiast any time of the day. As for myself, this is a cigar I would purchase again. While it’s a little pricey ($35.00 SRP), it is good enough to make a consideration for a box purchase.