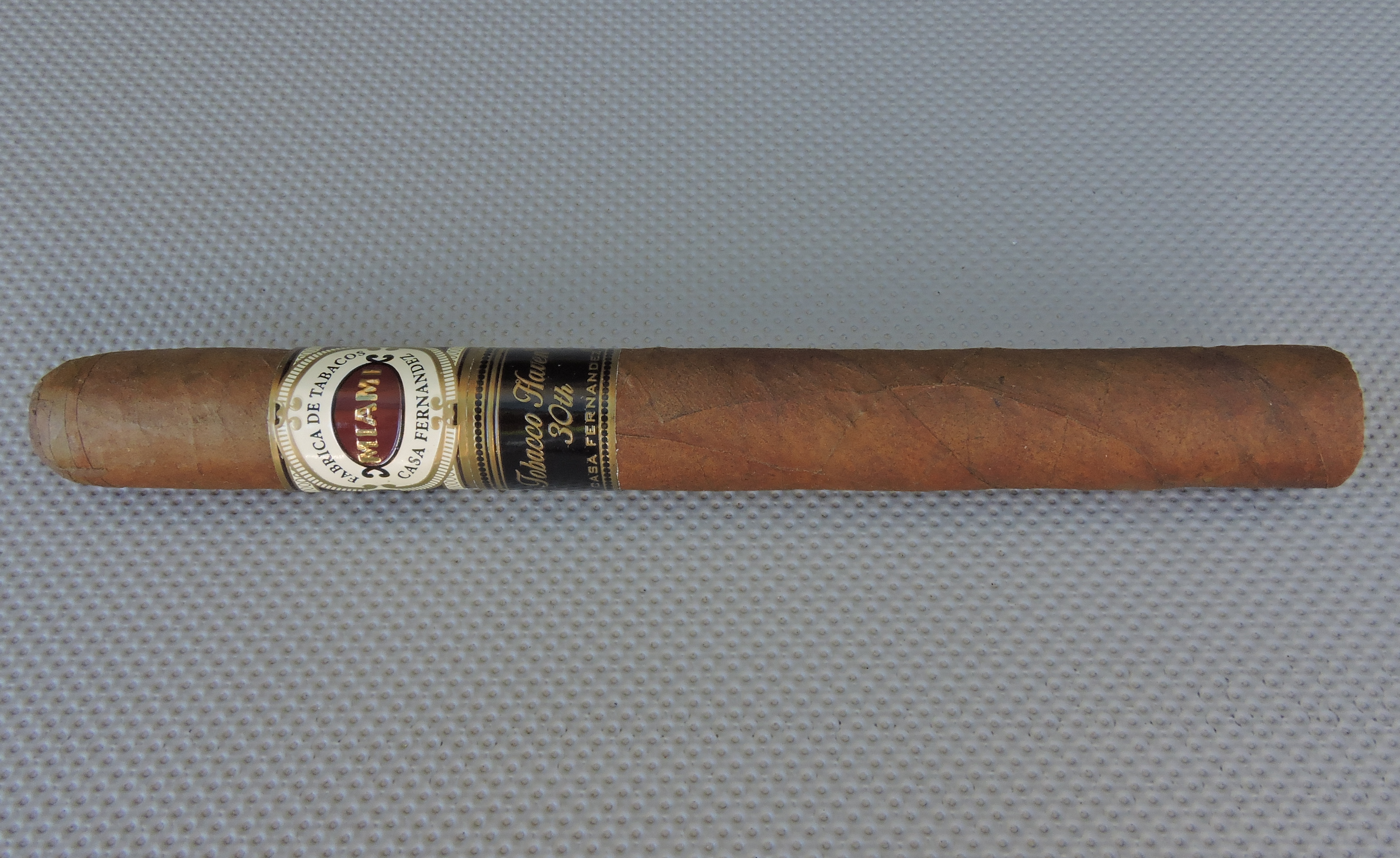 Aganorsa Leaf is a part of a tobacco conglomerate owned and operated by Eduardo Fernandez. This conglomerate includes the world-renowned Aganorsa Farms in Nicaragua, two factories (Tabacos Valle de Jalapa S.A – better known as TABSA and Sabor Aganorsa S.A. – better known as SABSA) and the Casa Fernandez Miami in the United States. The conglomerate also owns and operates a U.S. based distribution company. While it is the 30th anniversary of Tobacco Haven, it is also technically the 40th anniversary of the cigar brands that make up the Aganorsa Leaf operation. In 2002, Fernandez purchased Tabacalera Tropical, the company founded by the late Pedro Martin in 1978 and this became the foundation of what would be Casa Fernandez.

Tobacco Haven is no stranger to single shop exclusive releases. Two of the more famous releases include the La Flor Dominicana Doomsday 2012 Meaner Digger and Leroy vs. The Dark Master, a collaboration between Christian Eiroa and Edgar Hoill. Now the Casa Fernandez Miami Tobacco Haven 30th  takes its place alongside those exclusive releases.

Without further ado, let’s break down the Casa Fernandez Miami Tobacco Haven 30th and see what this cigar brings to the table. 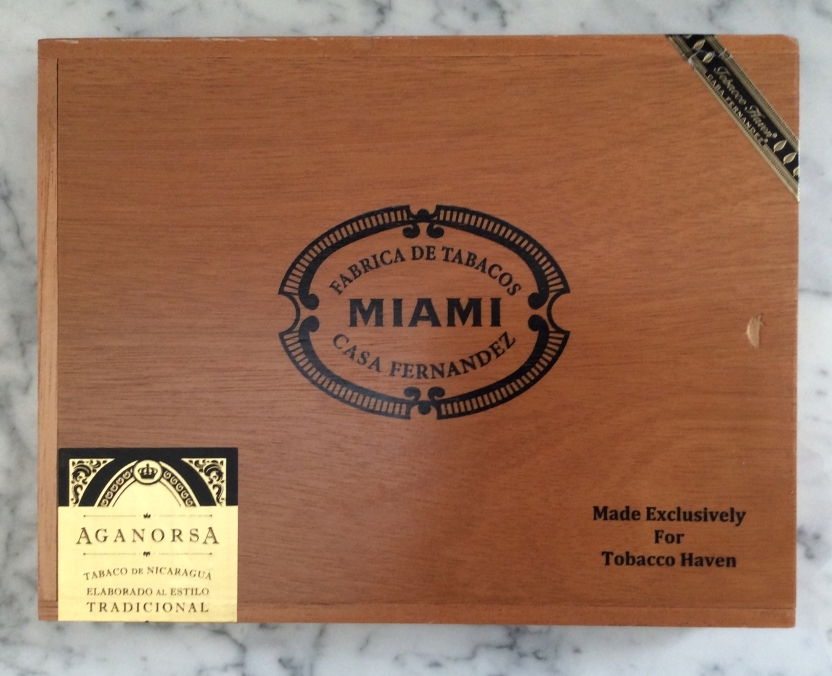 The Casa Fernandez Miami Tobacco Haven 30th is a 100% Nicaraguan puro incorporating tobaccos from the Aganorsa farms and highlighted by a Nicaraguan Corojo ’99 wrapper.

The Casa Fernandez Miami Tobacco Haven 30th is available in one size – a 7 x 52 Double Corona. The cigars are packed in 12-count boxes. 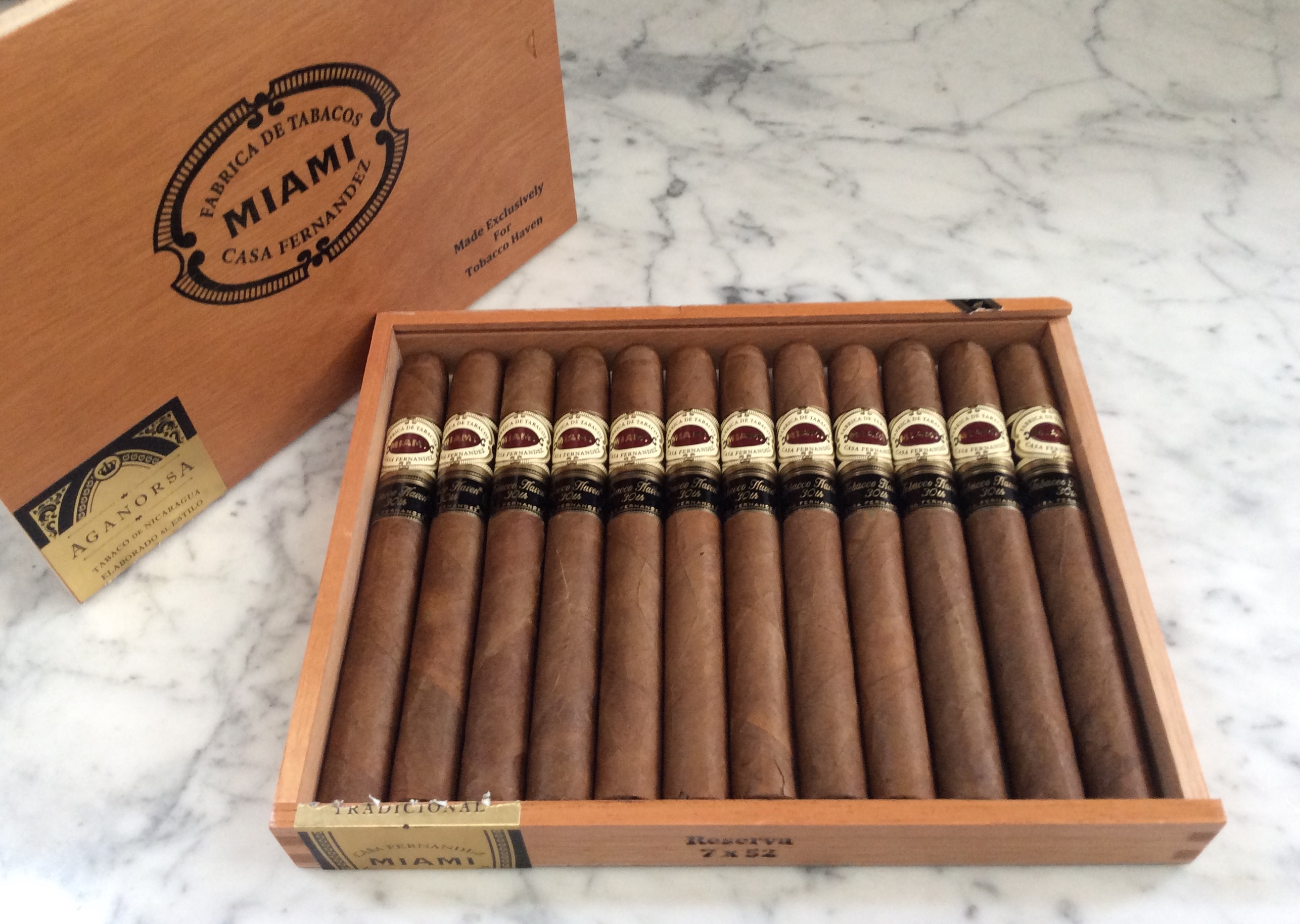 The Nicaraguan Corojo ’99 of the Casa Fernandez Miami Tobacco Haven 30th had almost a caramel color with a slight rosado tint to it. This was a wrapper that didn’t have much in the way of oil on the surface and had a slightly rough feel when held in the hand. There were some visible veins and some visible wrapper seams. 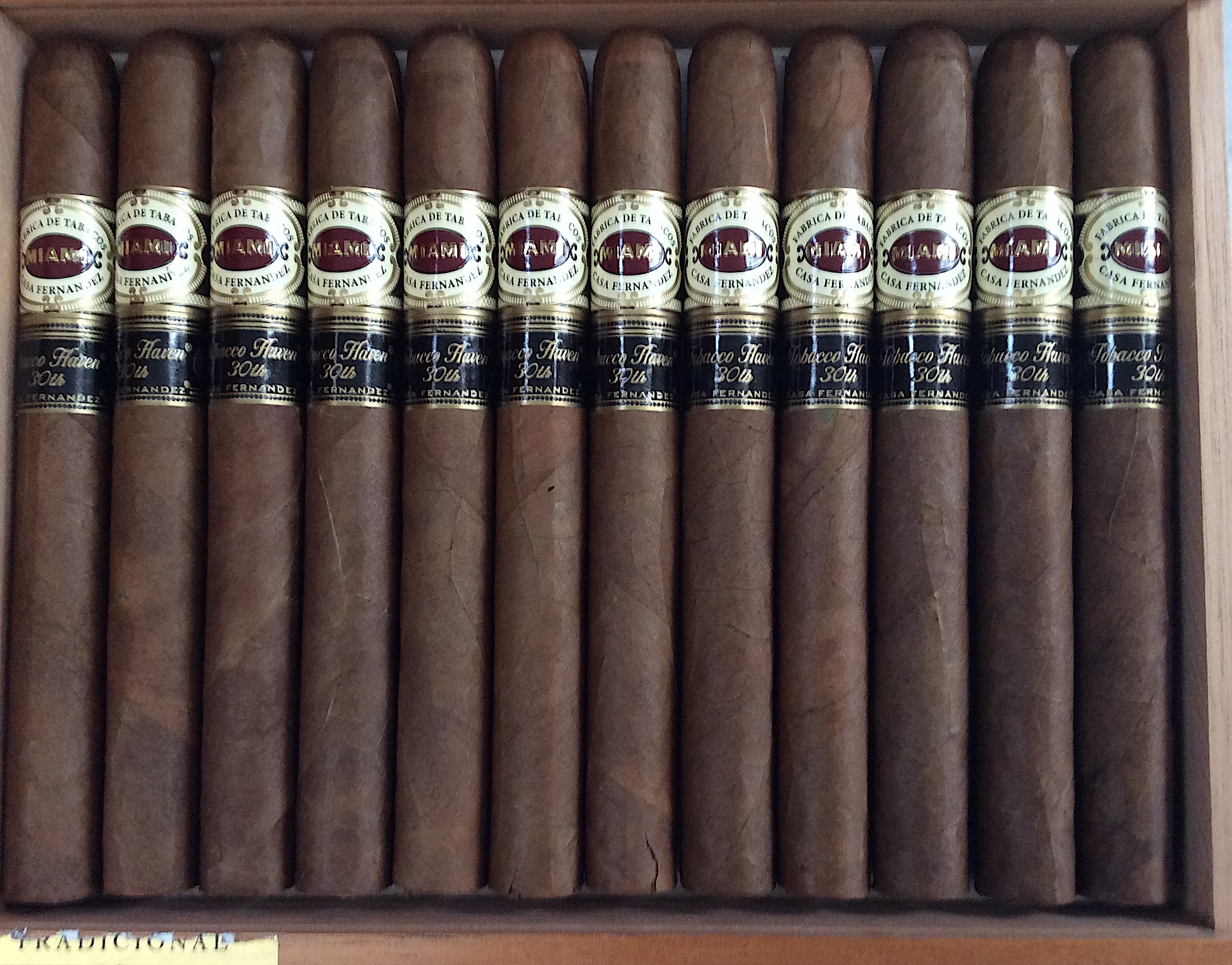 There are two bands on the Casa Fernandez Miami Tobacco Haven 30th. The primary band has a red oval sitting on a pale yellow field. On the red oval is the text “MIAMI” in gold font. There is an outer gold ring surrounding the red oval. In between the ring and the red oval is the tex “FABRICA DE TABACOS” and “CASA FERNANDEZ” in black font. On the left and right side of the band is a thick brown stripe. Just above the brown stripe is a thin pale yellow stripe with a gold chicken-wire-like design on it. Finally, the top and bottom of the band have gold and black trim.

The secondary band is black in color with gold trim across the top and bottom. On the center of the band is the text “Tobacco Haven 30th” in gold cursive font. Just below that text is the text “CASA FERNANDEZ” in a smaller gold font. On the left and right side of the band are a series of gold leaf designs.

Prior to lighting up the Casa Fernandez Miami Tobacco Haven 30th, I chose a straight cut to remove the cap. After the cap was removed, I proceeded with the pre-light draw. The dry draw delivered a mix of natural tobacco, earth, and a slight pepper note. All things considered, I deemjed the pre-light draw to the Casa Fernandez Miami Tobacco Haven 30th to be satisfactory. At this point, I was ready to light up this cigar and see what the smoking experience would have in store.

The Casa Fernandez Miami Tobacco Haven 30th started out with a short moderate black pepper spurt. Once the pepper subsided, it gave way to notes of natural tobacco and dusty earth. When the pepper settled in the background it was joined by some cedar notes. On the retro-hale, there was an additional layer of black pepper with some cedar notes mixed in.

Throughout the first third, the earth notes were grounded in the forefront. For the most part, the natural tobacco was a secondary note, but from time to time surfaced in the forefront. I found the flavors to have a nice smooth and, to some extent creamy, texture to them. Meanw,hile the black pepper and cedar were secondary notes providing subtle input into the flavor profile.

The earth notes remained in the forefront during the second third of the Casa Fernandez Miami Tobacco Haven 30th Anniversary. By this point, the natural tobacco flavor was now a secondary note. During this stage of the smoking experience, the cigar started to shed some of the creamy texture it had during the first third. Once the cigar reached the 2nd half, there was an increase in the black pepper notes and, to a lesser extent, the cedar notes.

By the last third, the black pepper notes were now in the forefront with the earth notes. Toward the very end of the cigar, the black pepper had the edge. While there was more in the way of pepper, it never became overwhelming. Meanwhile, notes of natural tobacco and cedar were still present, but the creaminess early on was now gone. This is the way the Casa Fernandez Miami Tobacco Haven 30th came to a close. The resulting nub was firm to the touch and cool in temperature.

While at times there was a slight curvature of the burn line of the Casa Fernandez Miami Tobacco Haven 30th, this was a cigar that had no problem maintaining a straight burn path. This burn line didn’t warrant much in the way of additional touch-ups.   The resulting ash had a salt and pepper color scheme to it. This was a firm ash that came off the cigar in clean chunks. The burn temperature was ideal. I did find for a 7 x 52, this cigar burned a little fast (average smoke about 85 minutes, which is about 15 to 20 minutes faster than I would expect). The quicker burn rate had no adverse effects other than to result in a smoking experience shorter in duration. 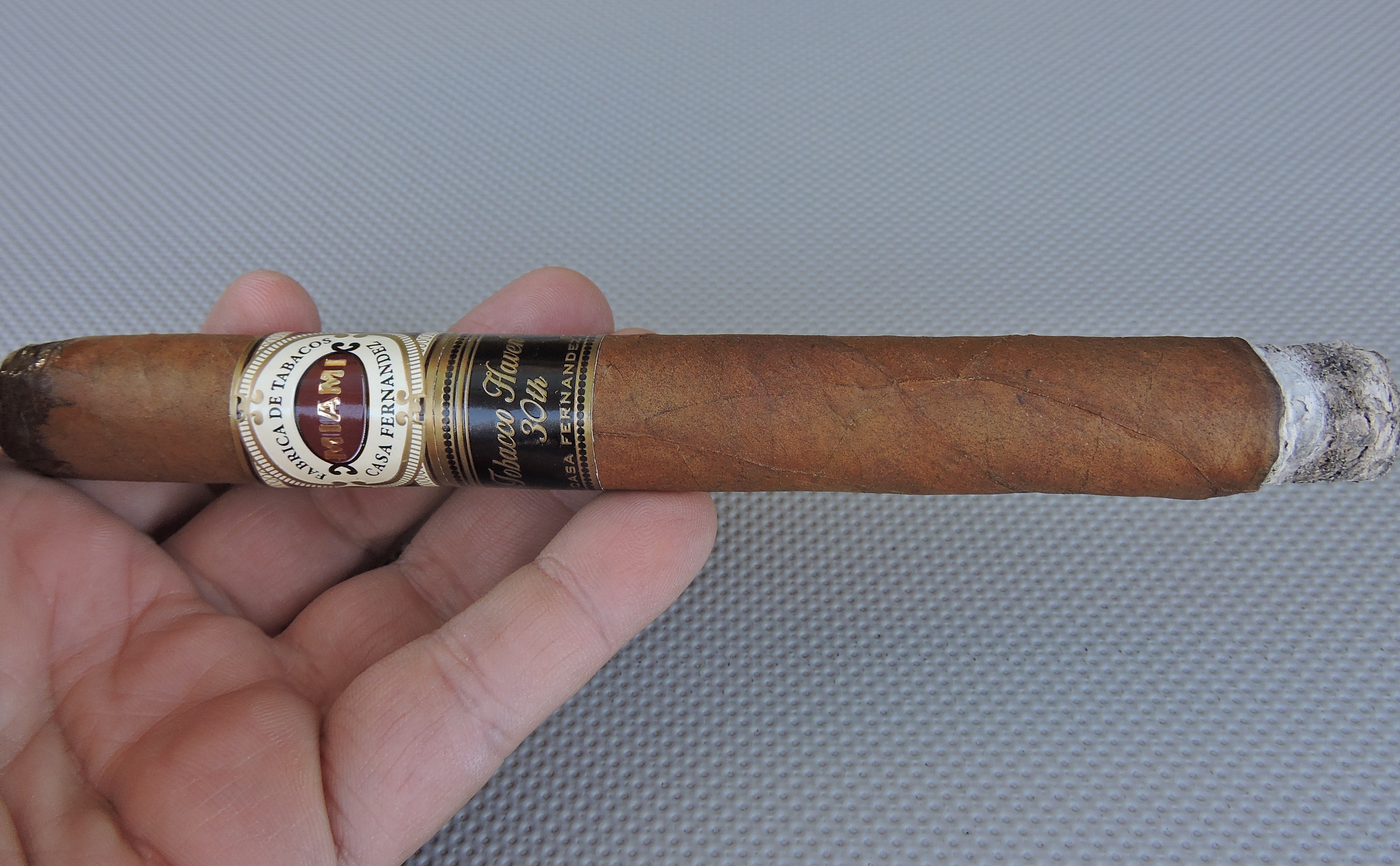 In terms of the draw of the Casa Fernandez Miami Tobacco Haven 30th, this was a draw that was open, but not loose. This is a very easy cigar to derive flavor from.

In terms of strength and body, the Casa Fernandez Miami Tobacco Haven 30th  started out a solid medium. There was a slight uptick in strength and by the second third, the strength moved into medium to full territory – where it pretty much stayed at a constant level for the remainder of the smoke. As for the body, I found the medium-bodied intensity level to be constant throughout the smoking experience.

When it came to strength versus body, I found both attributes to balance each other early on, but by the second half, I gave a slight nod to the strength.

I’ve been pretty vocal that I feel the single shop exclusive market has become way too saturated with releases. At the same time, I have found it has become more difficult to find a standout single shop exclusive. However, when it comes to the Casa Fernandez Miami Tobacco Haven 30th, this is a cigar that really delivers. I enjoyed the flavors a lot on this cigar – and perhaps what was most surprising is how well it performed in a 7 x 52 Double Corona format. Sometimes with 7″ cigars, when it comes to flavor, I find that the cigar can “run out of gas” – the flavors just seem to completely go flat. This was not the case with the Tobacco Haven 30th, as I found it delivered nice flavor from start to finish.

This is a cigar I would recommend to a seasoned cigar enthusiast, but wouldn’t discourage a novice looking for “graduate” to something “medium” or “medium plus”.  One final note, this cigar has a great price – at $9.99 per cigar (or $99.99 for a 12 count box), this is a cigar that delivers high value. I especially found this an excellent price for a U.S. made cigar. As for myself, it’s a cigar that scores on both merit and value – and it’s worthy of a box purchase.