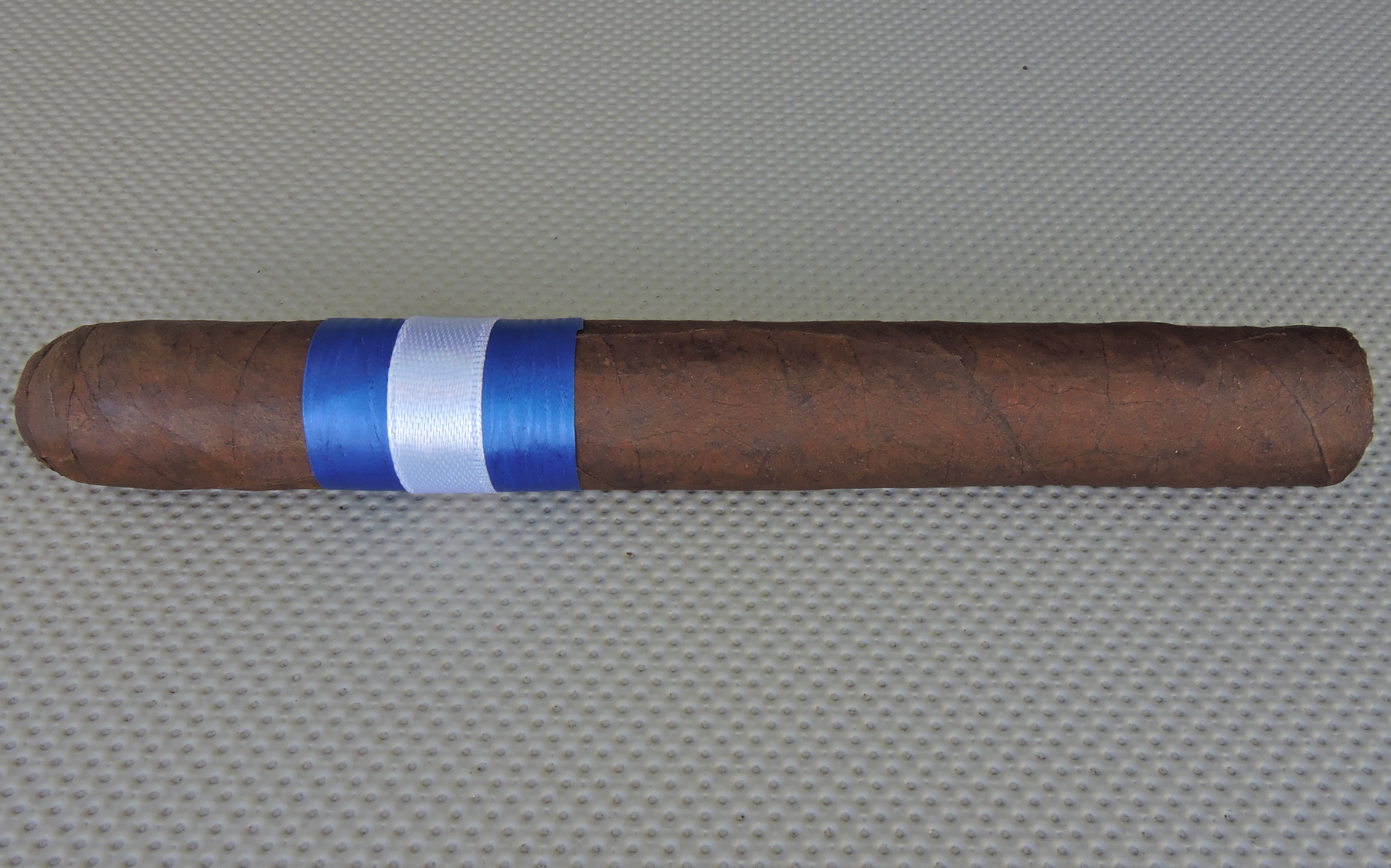 Sanchez says the 1502 Serious Cigars Edition is the first of many similar projects to come. According to Sanchez, the cigar reflects the love tof the craft of making cigars.  The 1502 Serious Cigars release is a small batch release – with only 1,000 cigars made. It’s s a true limited edition – as Sanchez says it cannot be duplicated. Initially Serious Cigars has been offering a ten count of this release as a bonus with a box purchase (* = See Editor’s Note at the end)

Without further ado, let’s break down the 1502 Serious Cigars Edition and see what this cigar brings to the table.

Keeping to the theme of paying homage to Nicaragua, the 1502 Serious Cigars Edition consists of 100% Nicaraguan tobacco. The cigar is produced at 1502’s long-time manufacturing partners, Plasencia Cigars S.A. in Estelí, Nicaragua.

The Nicaraguan wrapper of the 1502 Serious Cigars Edition had a dark brown roasted coffee bean color to it. Upon closer examination, there was a slight amount of mottling on the surface. The wrapper had a slight amount of oil to it, but also had somewhat of a silky complexion to it. There were a few visible veins and the dark color of the wrapper did a good job at hiding the seams.

There are two things that are a bit different about the cigar compared to many of the other offerings by 1502. While most of the cigars in the 1502 Cigars portfolio are box pressed with a partially covered footer (which Sanchez calls a “cigar lock”) the 1502 Serious Cigars Edition is a rounded parejo with an open footer. The one notable cigar in the 1502 portfolio that also goes against the box-press/partially covered footer grain is the 1502 Blue Sapphire.

The 1502 Serious Cigars Edition doesn’t exactly have a band. It consists of two ribbons – one blue and one white. The ribbons are arranged in a blue, white, and blue fashion – reflecting the design of the Nicaraguan flag.

As is my custom with most cigars, I chose a straight cut before lighting up the 1502 Serious Cigars Edition. After clipping the cap, I moved on to the pre-light draw phase. The cold draw was simple, but quite enjoyable as I detected notes of roasted coffee, earth, and a subtle sweetness. The pre-light draw to the 1502 Cigars Serious Edition was quite satisfying. At this point, I was ready to light up the 1502 Serious Cigars Edition and see what the smoking phase would have in store.

The 1502 Serious Cigars Edition started out with notes of black coffee and earth. This was soon joined by notes of black pepper, milk chocolate, and a slight mineral note. As the smoking experience of the 1502 Serious Cigars Edition continued, the black coffee notes surfaced in the forefront. A little further into the first third, the milk chocolate notes joined the black coffee as primary flavors. During the first third, there was a slight creamy undertone which kept the flavor profile quite smooth. The pepper, earth, and mineral note moved into the background. There was also an additional layer of black pepper on the retro-hale.

As the 1502 Serious Cigars Edition moved into the second third, the chocolate notes started to recede and by the midway point, the black coffee notes were back in control. The chocolate joined the earth, pepper, and mineral notes in the background. Later in the second third, these background notes started to increase in intensity. Simultaneously, the smoothness from the creamy undertone diminished and some grittiness emerged.

By the last third, the earth notes increased enough to join the coffee notes in the forefront. The earth notes had a bit of dank quality to them, but I found that worked quite well in the overall scheme. By this point, the smoothness early had transitioned to more of a gritty profile, but I found that to be a positive as well.  The increase of the pepper and mineral notes leveled off with these notes remaining in the background. The milk chocolate was also still in the background as well. This is the way the 1502 Serious Cigars Edition came to a close. The resulting nub was slightly soft to the touch but cool in temperature.

The 1502 Serious Cigars Edition had a slight amount of jaggedness on the burn line from time to time. This was remedied easily with some touch-ups. I didn’t find the amount of touch-ups to be excessive and the cigar was never in danger of going off track on its burn path. The resulting ash was light gray in color. There was a slight amount of flaking from time to time, but that didn’t prove to be too problem-some. Meanwhile, the burn rate and burn temperature were both ideal. 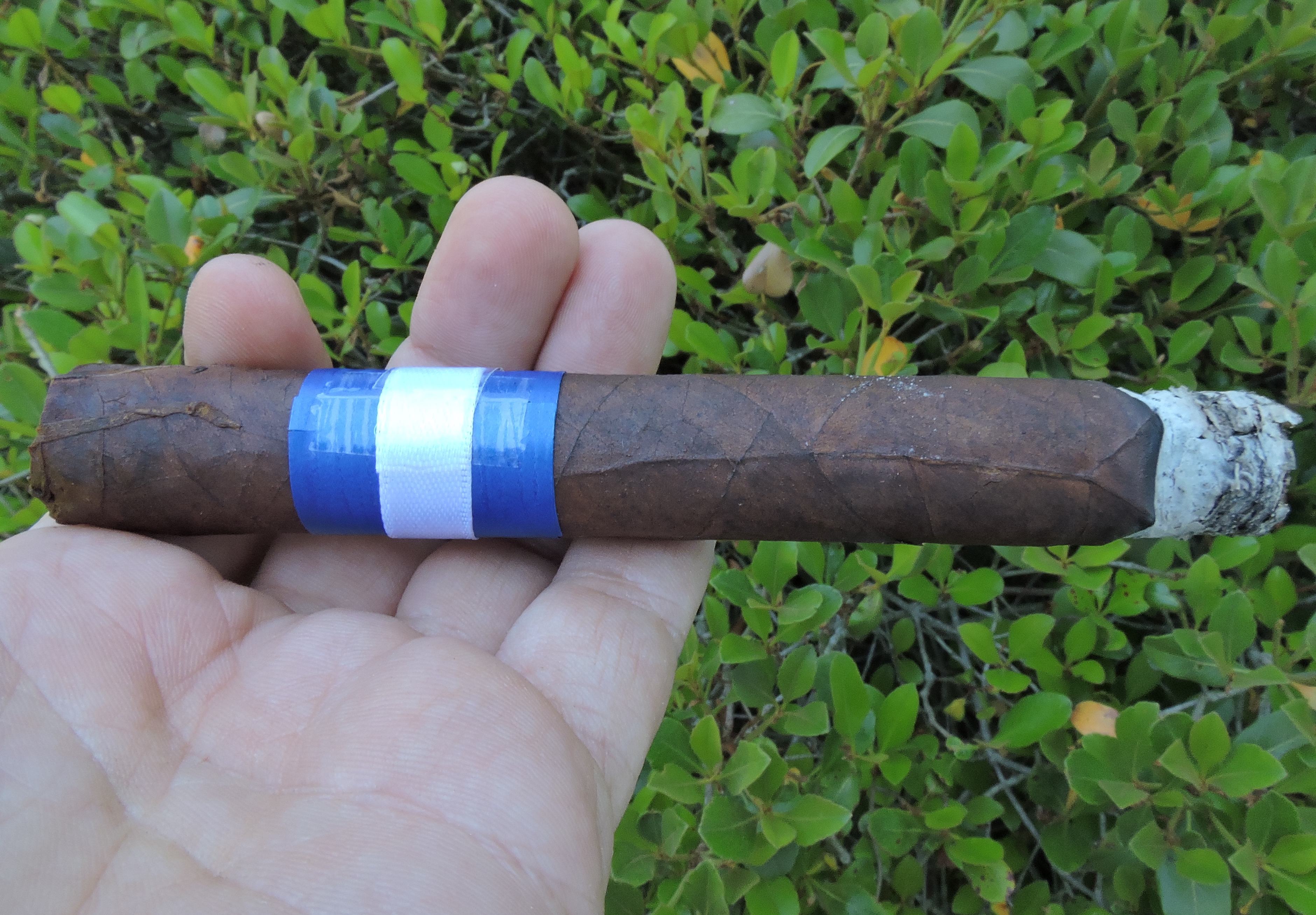 Burn of the 1502 Serious Cigars Edition

The draw to the 1502 Serious Cigars Edition performed quite well. It had the right amount of openness versus resistance. It also was a low maintenance cigar to derive flavor from.

For the most part, I found the 1502 Serious Cigars Edition to deliver a medium strength, medium-bodied smoke from start to finish. There was a slight amount of increase in the intensity of both attributes, but as the cigar came to a close, I found it was still in the medium range for strength and body.

One note on the ribbons for the band of the 1502 Serious Cigars Edition – on each of the samples I smoked they were a little difficult to remove. I had to use some TLC in removing them in order not to damage the cigar.

I particularly liked the journey that the 1502 Serious Cigars Edition took me on. It started out with some smooth and creamy qualities and progressed to some a little rougher and grittier. To me, this worked extremely well with the flavors produced and I found it to be a nice positive. As I’ve mentioned before, the increase of single shop exclusives has flooded the market, so it’s getting difficult to find ones that stand out. The 1502 Serious Cigars Edition is one that stands out. It’s one I could recommend to any cigar enthusiast. While it’s currently available as a bonus cigar with a box purchase, if sold alone it’s a little pricier at $13.00 per cigar, but it’s quite enjoyable. It’s one I would smoke again – and it certainly garners box worthy consideration.

This review was published prior to the cigar’s launch on May 14, 2018. We were not made aware that this cigar would only be available with a box purchase of an existing 1502 Cigar offering from Serious Cigars. Our goal is not just to assess the performance of a cigar, but give you the background story and help you find out how to obtain it. As such, if this information was available, it would have been disclosed. Cigar Coop stands behind the performance of this cigar for both its numeric score and value rating. We do apologize for this, and we are taking steps to ensure this problem does not happen again.