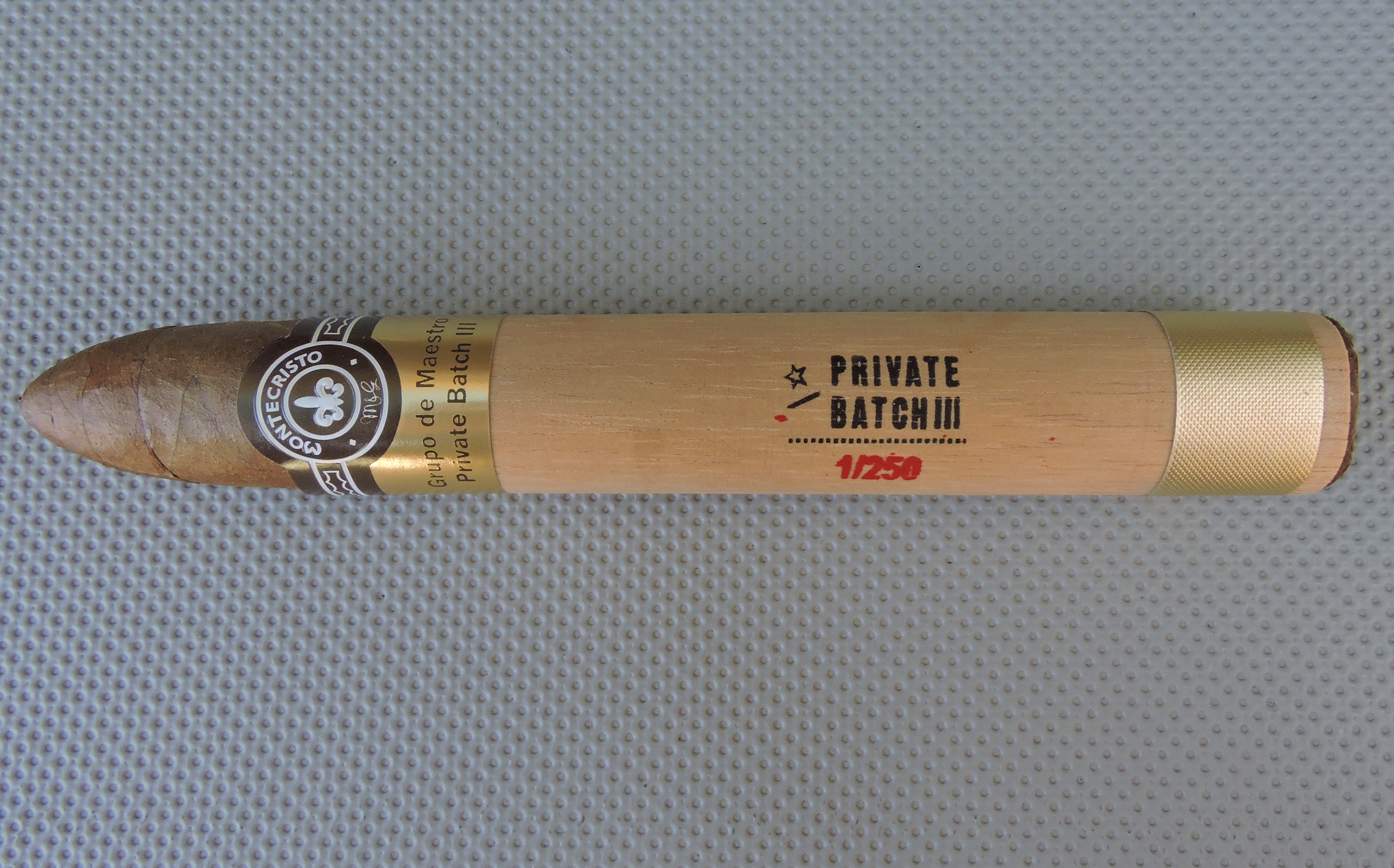 Until Rafael Nodal joined the Altadis U.S.A. team in 2017, Altadis was a company that had not previously relied on a “face” for the brand.  Altadis U.S.A.’s approach has been to let the brands in its portfolio speak for themselves. As a part of the story of the brands, the Grupo de Maestros works behind the scenes. Altadis U.S.A has touted this team as an experienced group with more than 250 years combined experience. The company describes the group as follows: 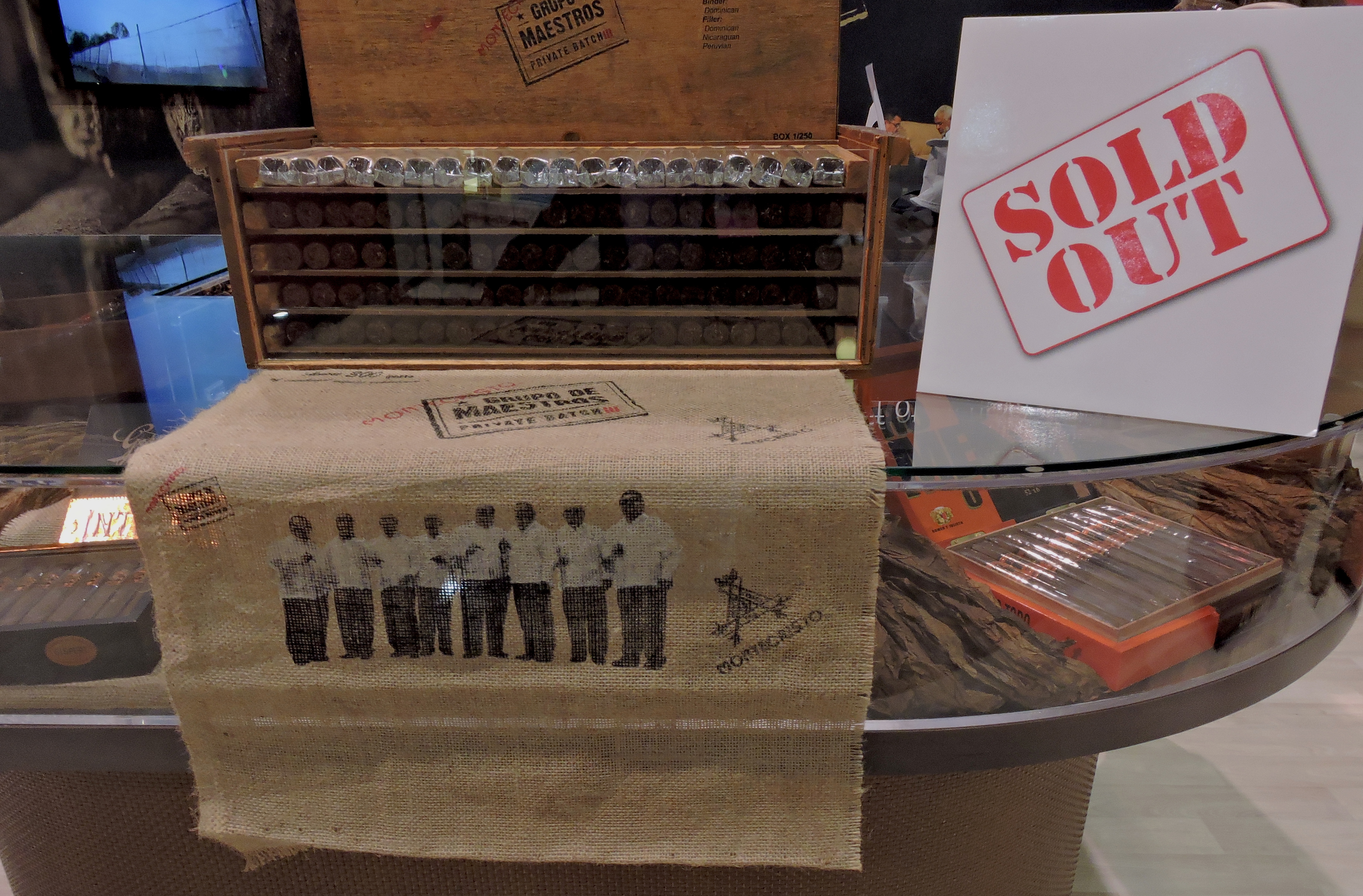 Each installment of the Montecristo Grupo de Maestros Private Batch Series features a unique blend and is available in a single size.

For completeness, we list the components of the previous two releases.

The Private Batch II features an Ecuadorian Sumatra wrapper over a combination of Nicaraguan and Dominican tobaccos. The main release was a 6 x 50 Toro, but there also was a Churchill size offered at JR Cigar. 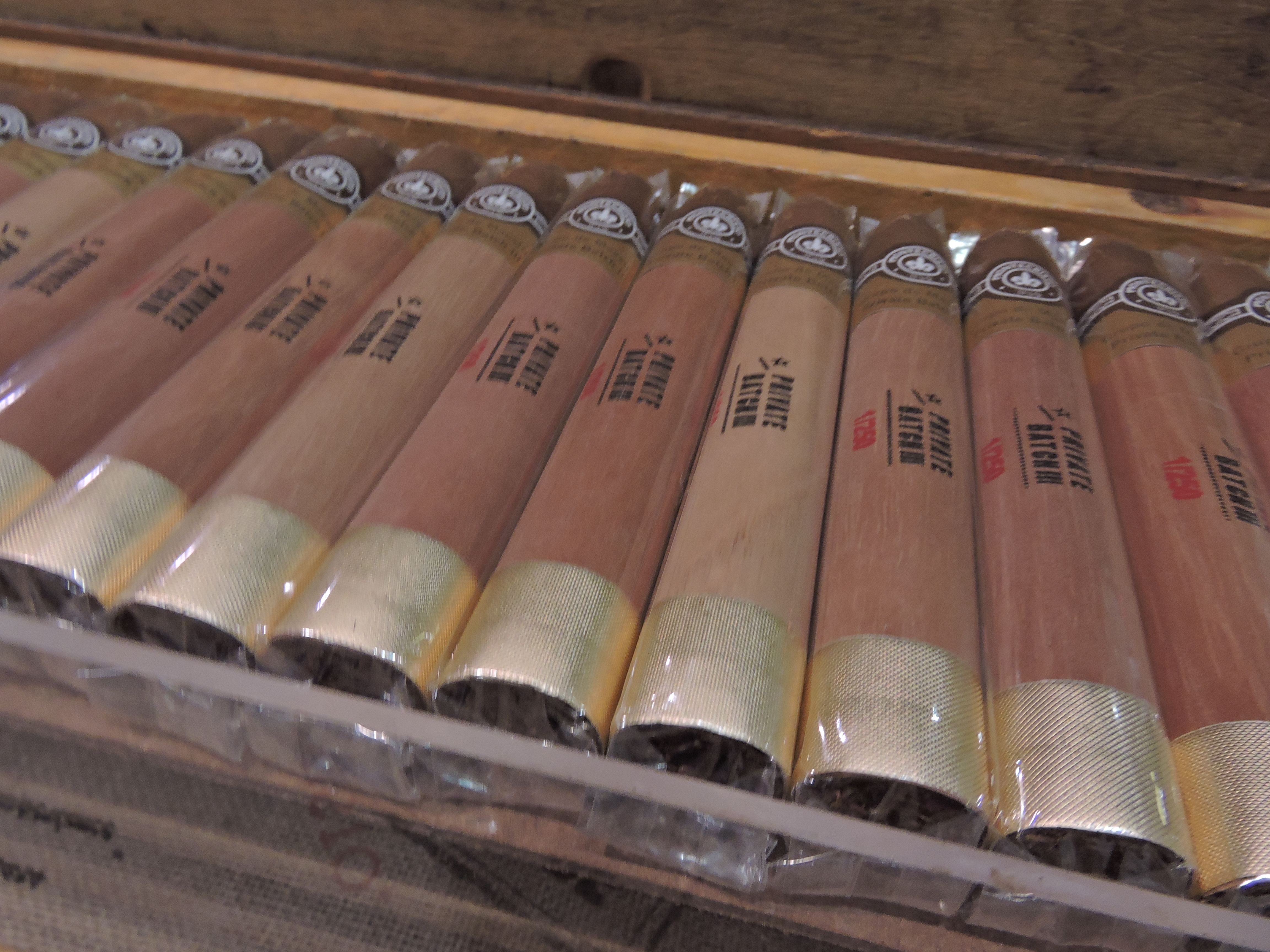 The Ecuadorian Habano wrapper of the Montecristo Grupo de Maestros Private Batch III had a medium brown color. This was a wrapper that had some oil on it. While the wrapper was relatively smooth, there were still some visible veins. Any visible wrapper seams were minimal. The belicoso tip has a moderate taper toward the head of the cigar. 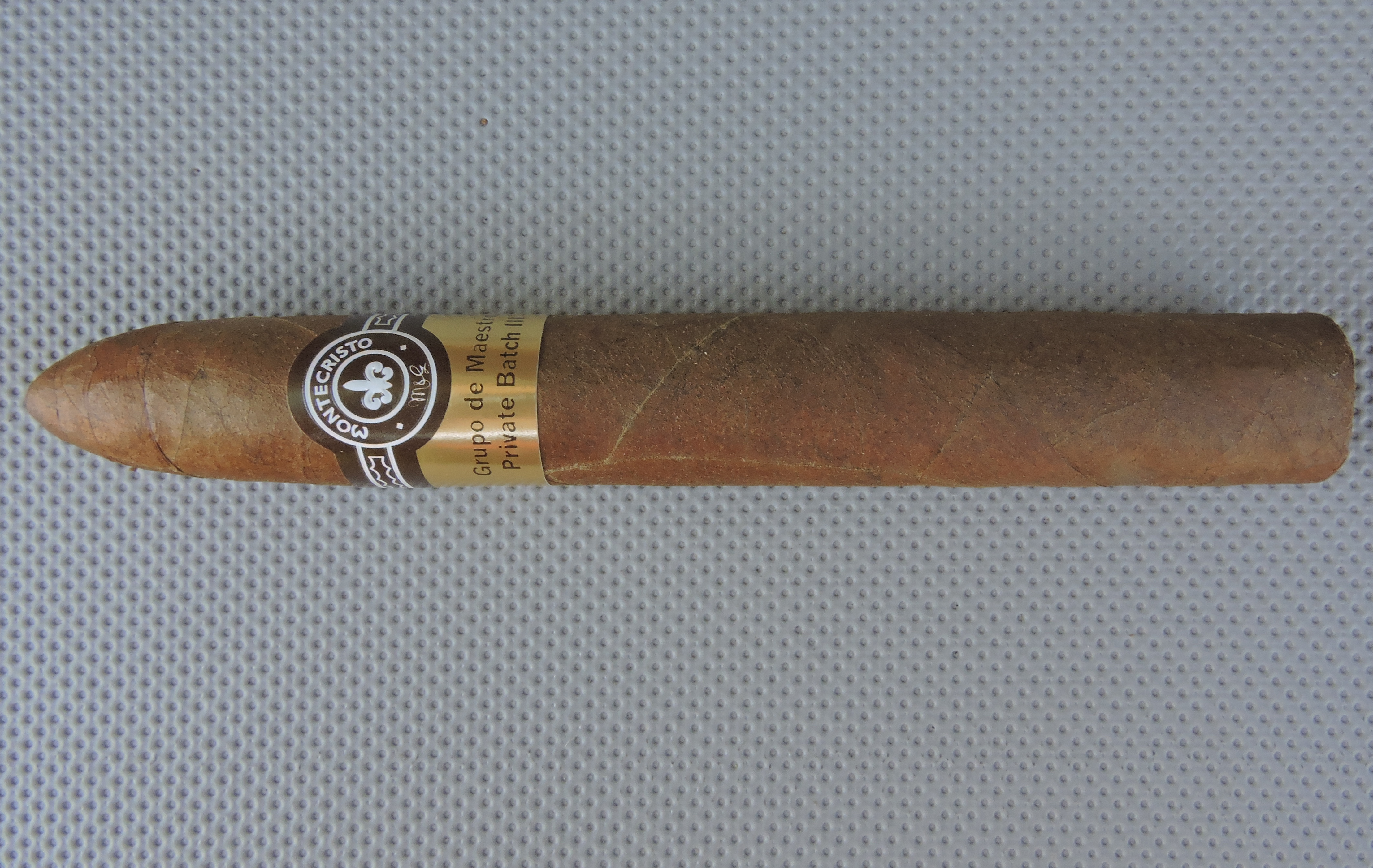 There are two parts to the band of the Montecristo Grupo de Maestros Private Batch III. The upper portion has the design of the classic Montecristo brown label band. This section is all brown with white font. On this band is a fleur-de-lis surrounded by a white ring. Above the white ring is the text “MONTECRISTO”. There is an outer gold ring surrounding the white ring and text.

The lower portion of the band has a gold foil design giving the effect of a pseudo-secondary band. On the band is the text “Grupo de Maestros Private Batch III” in dark font.

The Montecristo Grupo de Maestros Private Batch III has a cedar sleeve the goes from the footer and covers the band not he cigar. The cedar sleeve has a gold ribbon surrounding the lower portion. The upper portion replicates the band that is under the sleeve. On the sleeve is the text “PRIVATE BATCH III” stamped in black font. In addition, the text “1/250” is stamped in red font. The red stamp indicates the number of the trunk the cigar is from. The cigars for this assessment were samples from Altadis U.S.A., so we cannot confirm if this was from the trunk labeled “#1 of 250” or not.

Prior to lighting up the Montecristo Grupo de Maestros Private Batch III, I removed the cedar sleeve that covered the cigar. I placed a straight cut into the belicoso tip using my Credo Special T cutter with the 36 ring gauge hole. This allowed me to get a smaller ring gauge cut and to take advantage of the tapering near the cap of the cigar. From that point, I moved on to the pre-light draw. The dry draw delivered a mix of cedar, natural tobacco, and a slight floral note. This wasn’t the most exciting pre-light draw, but since its not factored into the score, there was no loss of points here. At this point, I was ready to light up the Montecristo Grupo de Maestros Private Batch III and see what the smoking phase would have in store.

The Montecristo Grupo de Maestros Private Batch III started out with a mix of natural tobacco, cedar, fruit sweetness and black pepper. The natural tobacco notes became primary early on with the fruit sweetness and pepper settling into the background. While the black pepper was a background note on the tongue, it was more prominent on the retro-hale. As the Private Batch III moved through the first third, an herbal note surfaced in the background.

As the Private Batch III entered the second third, the herbal note became more prominent and before the midway point, it joined the natural tobacco and cedar in the forefront. Meanwhile, at times I also detected some earthy notes floating between the background and forefront. The black pepper and fruit notes also remained in the background. Toward the latter part of the second third, the cedar notes increased.

The last third saw the cedar take over as the dominant flavor. The natural tobacco and herbal notes had receded into the background. There was an increase in the black pepper, but it also remained in the background. This is the way the Montecristo Grupo de Maestros Private Batch III came to a close. The resulting nub was firm to the touch and cool in temperature.

Burn-wise, the Montecristo Grupo de Maestros Private Batch III performed quite well. It maintained a straight burn path and had a relatively straight burn line. The resulting ash had a silvery gray color with some darker spots mixed in. This was an ash that wasn’t overly firm, but it was neither loose nor flaky. As for the burn rate and burn temperature, both were ideal. 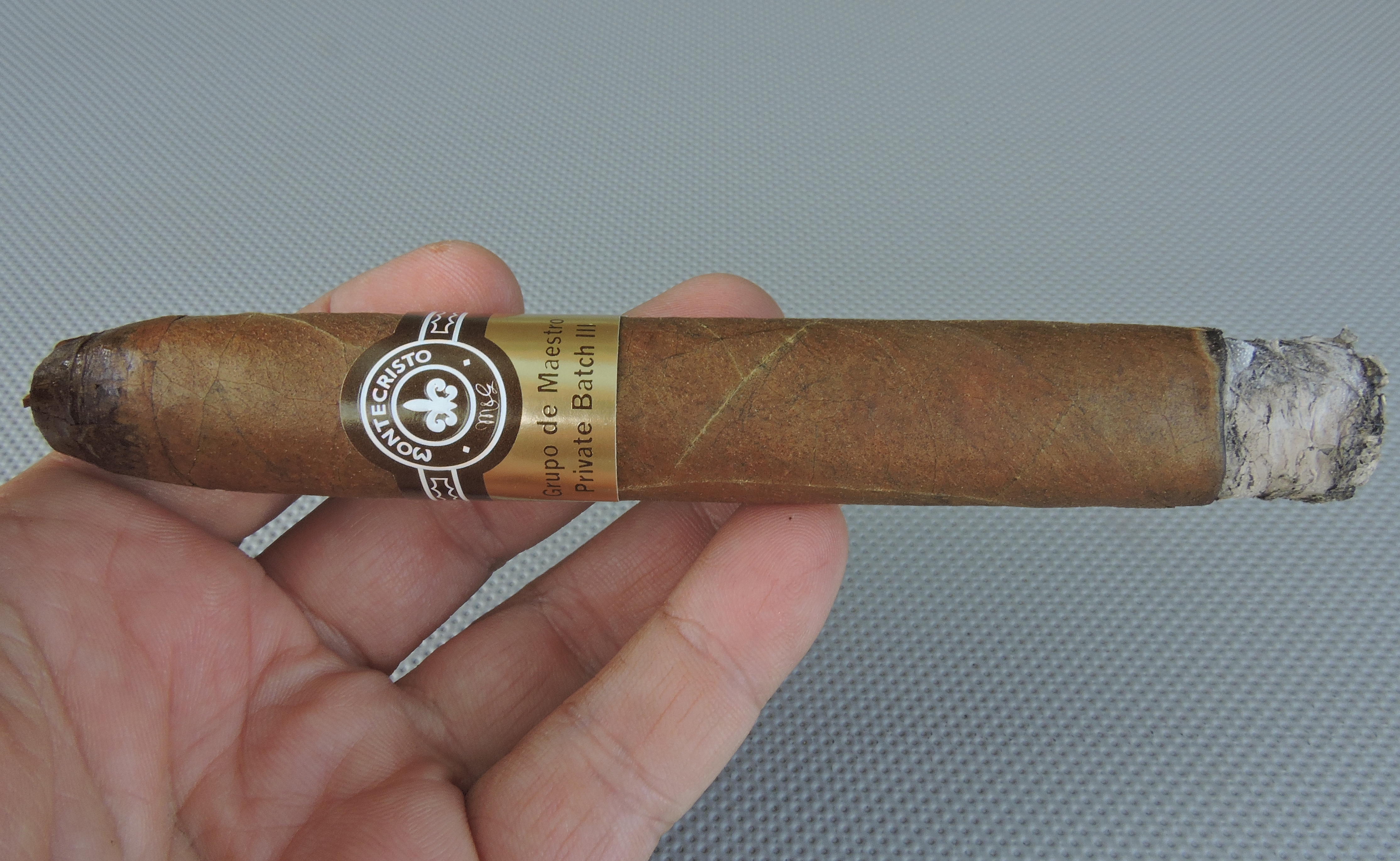 The draw to the Private Batch III had some resistance to it. While normally I like resistance on a draw, there was a little more on this cigar than I preferred. Still, this wasn’t a draw that was plugged by any means. At the same time, despite a snug draw, this cigar still produced ample amount of smoke.

There were two things that I liked about this blend. First up, I found the dialed back profile worked quite well with this blend. From the sweet herbal qualities, there is no doubt there is Peruvian tobacco in this blend – however, I liked how it didn’t overpower the blend. Secondly, I liked that this cigar offered more in the way of complexity in terms of flavor nuances and flavor changes.

On the other hand, despite a dialed back profile and a nice amount of complexity, there just wasn’t a lot else I found going on with this cigar. While this was a not a bad cigar, I was just looking for something more. It’s still a cigar I’d encourage a novice or experienced person to smoke, but at $16.00, it’s a pricier cigar. I’d recommend that you try a sample if you can to see if it’s a fit before deciding whether to put it in your humidor.