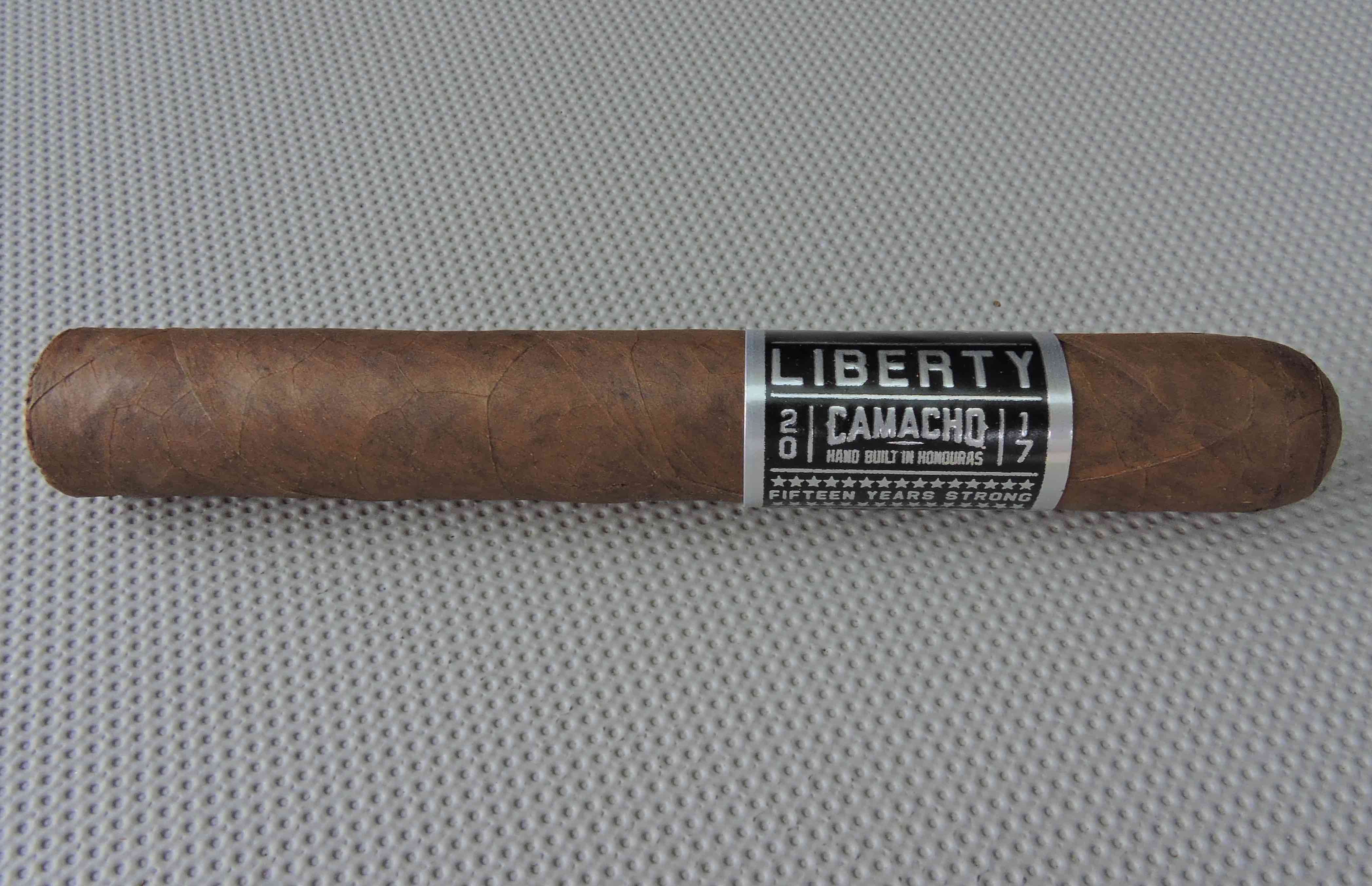 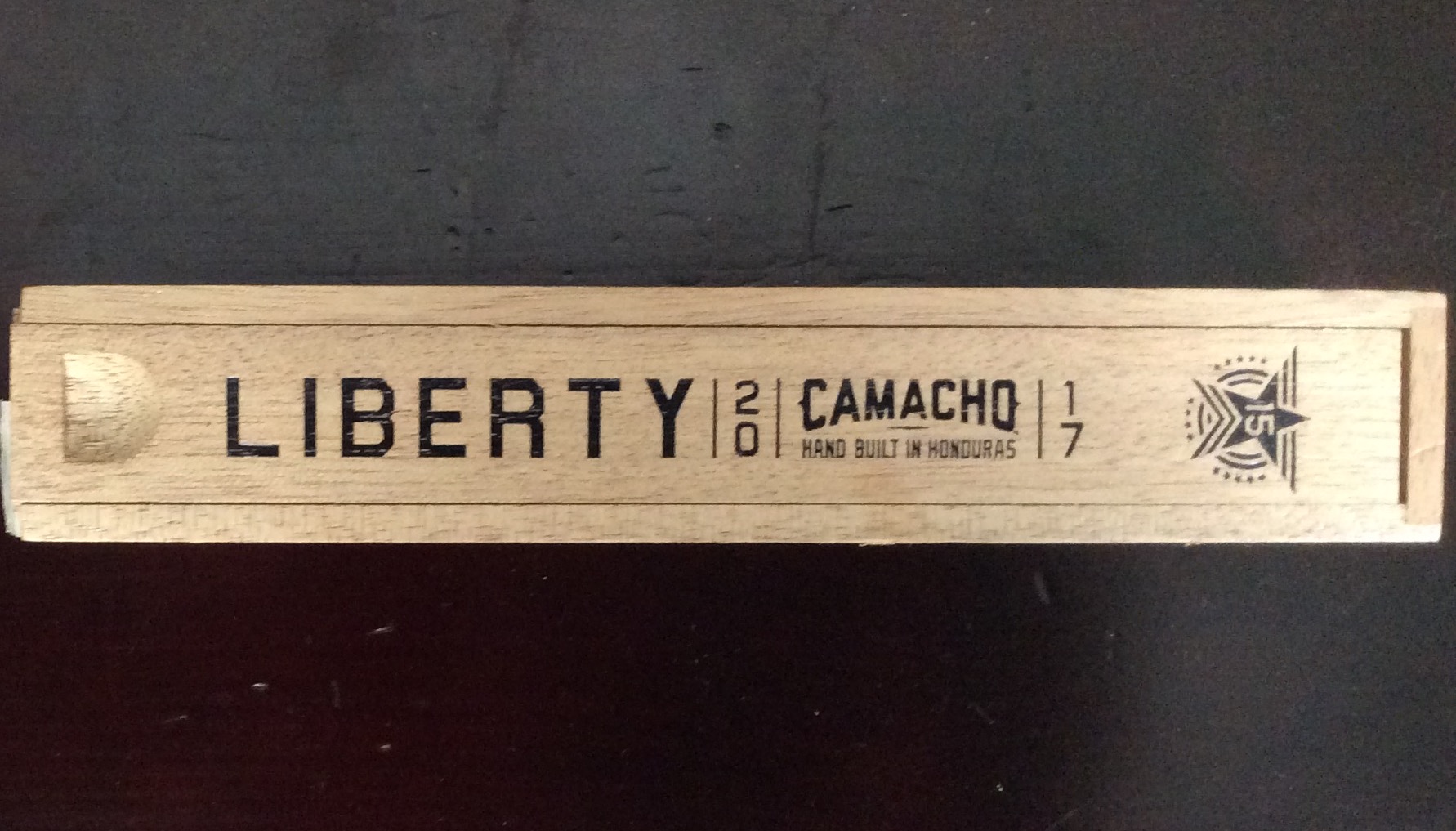 While the vitola has changed, one constant that has remained is the packaging. As with previous editions, each individual cigar is packaged in a coffin. In addition to the cigar, there was a commemorative fifteenth-anniversaryry lapel pin packaged in the coffin. 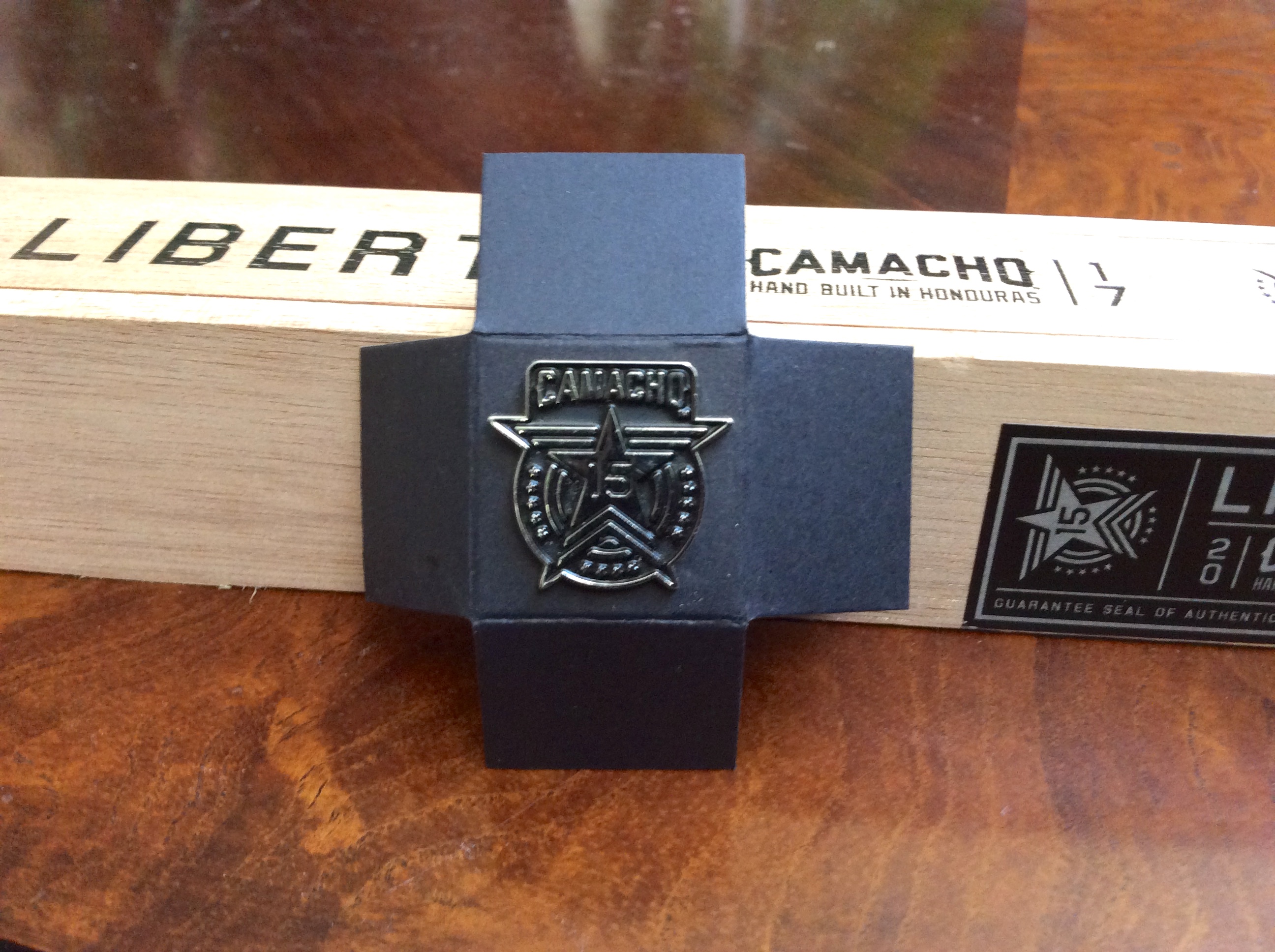 There were a total of 50,000 coffins released for the U.S. market. This is an increase from the 40,000 coffins that have typically been released. Each coffin is individually numbered.

Without further ado, let’s breakdown the Camacho Liberty 2017 and see what this cigar brings to the table.

The blend to the Camacho Liberty 2017 remains true to Camacho’s roots as it features a Honduran Corojo binder. In addition, there is Nicaraguan Corojo ’99 tobacco in the filler – along with Dominican Piloto Cubano (a Davidoff staple) in the filler. The cigar is finished with an Ecuadorian Habano wrapper.

As mentioned above, the Camacho Liberty 2017 was released in one size – a 6 x 54 Super Toro and each cigar is packaged in its own coffin. A total of 50,000 cigars/coffins were produced. There also was an additional 20,000 cigars produced for the international market. 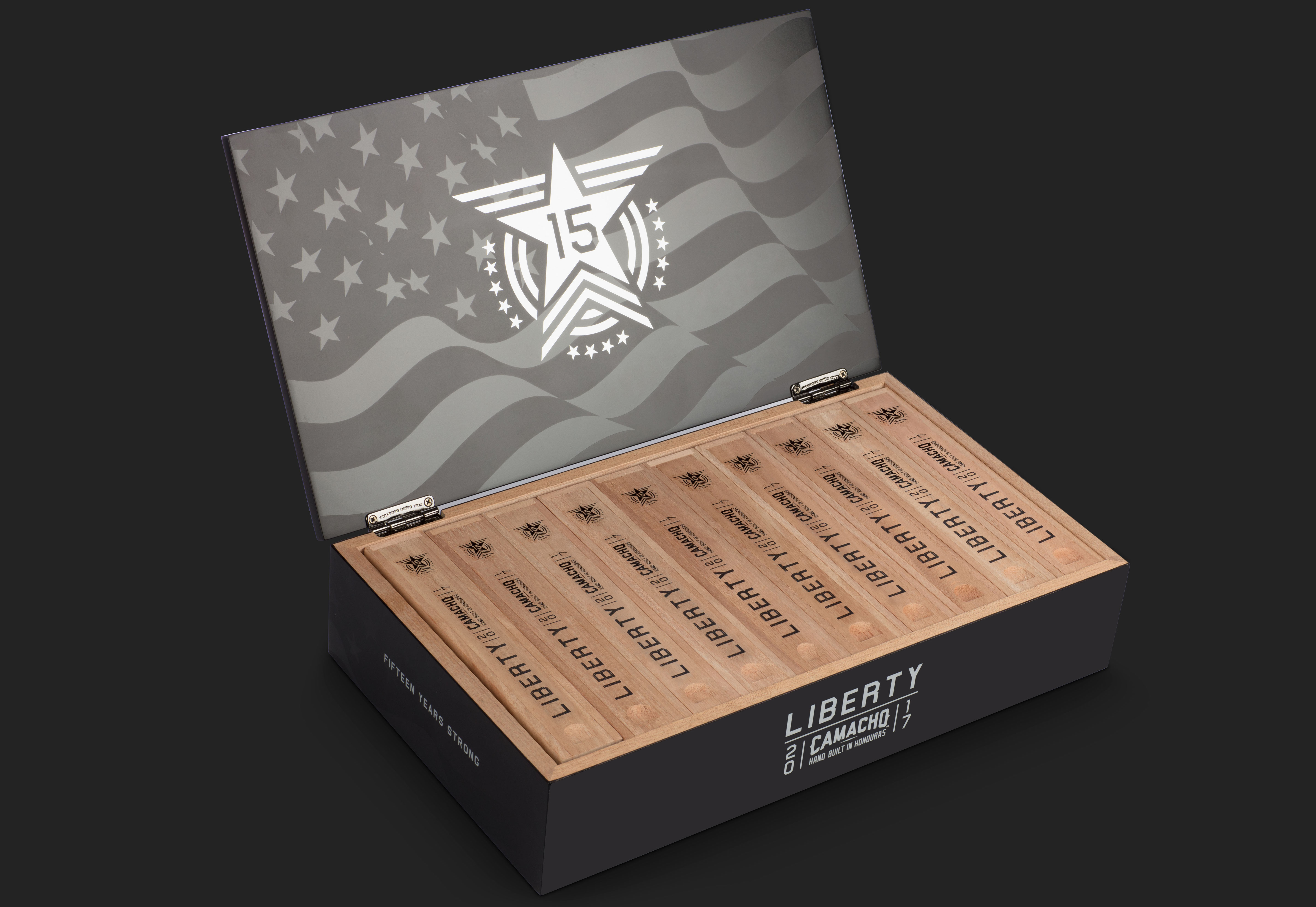 The Ecuadorian Habano wrapper of the Camacho Liberty 2017 had a dark wood color to it. There was a light sheen of oil on the surface. While this was a relatively smooth wrapper, there still were some visible veins. The darker color of the wrapper did a good job at hiding the wrapper seams.

The band of the Camacho Liberty 2017 is black with silver trim and silver font. The center of the band has a star logo commemorating the 15th anniversary of the Liberty. The left side of the band has an image of a flag. The right side contains the following text in landscape mode arranged in individual compartments: “LIBERTY”  “CAMACHO HAND MADE IN HONDURAS” (with a “20” and “17” surrounding the left and right side respectively), and “FIFTEEN YEARS STRONG” (with a row of stars above and below the text).

A straight cut was used to commence the smoking experience of the Camacho Liberty 2017. Once the cap was clipped, I moved on to the pre-light draw ritual. The cold draw delivered a mix of cocoa, a slight fruit sweetness, and wood. I considered this to be a satisfactory pre-light draw.  At this point, I was ready to light up the Liberty 2017 and await what the smoking phase would have in store.

Throughout the first third, the combination of the cocoa and dusty earth alternated in intensity with the combination of the natural tobacco and fruit sweetness. Once the Camacho Liberty reached the second third, the cocoa notes started to diminish. The dusty earth and natural tobacco became primary notes. The fruit sweetness and cocoa settled in the background with the black pepper. By the second half, the fruit and cocoa were replaced by a floral note.

Later in the second third, the dusty earth maintained its position as the primary note. The natural tobacco diminished joining the pepper and floral notes. This flavor profile held into the final third. This is the way the Camacho Liberty 2017 came to a close. The resulting nub was cool in temperature and slightly soft to the touch.

In terms of burn, the Camacho Liberty 2017 performed very well. This is a cigar that had little trouble maintaining a straight burn path and at the same time required low maintenance to maintain a straight burn line. The resulting ash had a salt and pepper complexion to it. This is a burn that was firm where the ash came off the cigar in clean chunks. Meanwhile, the burn rate and burn temperature were both ideal. 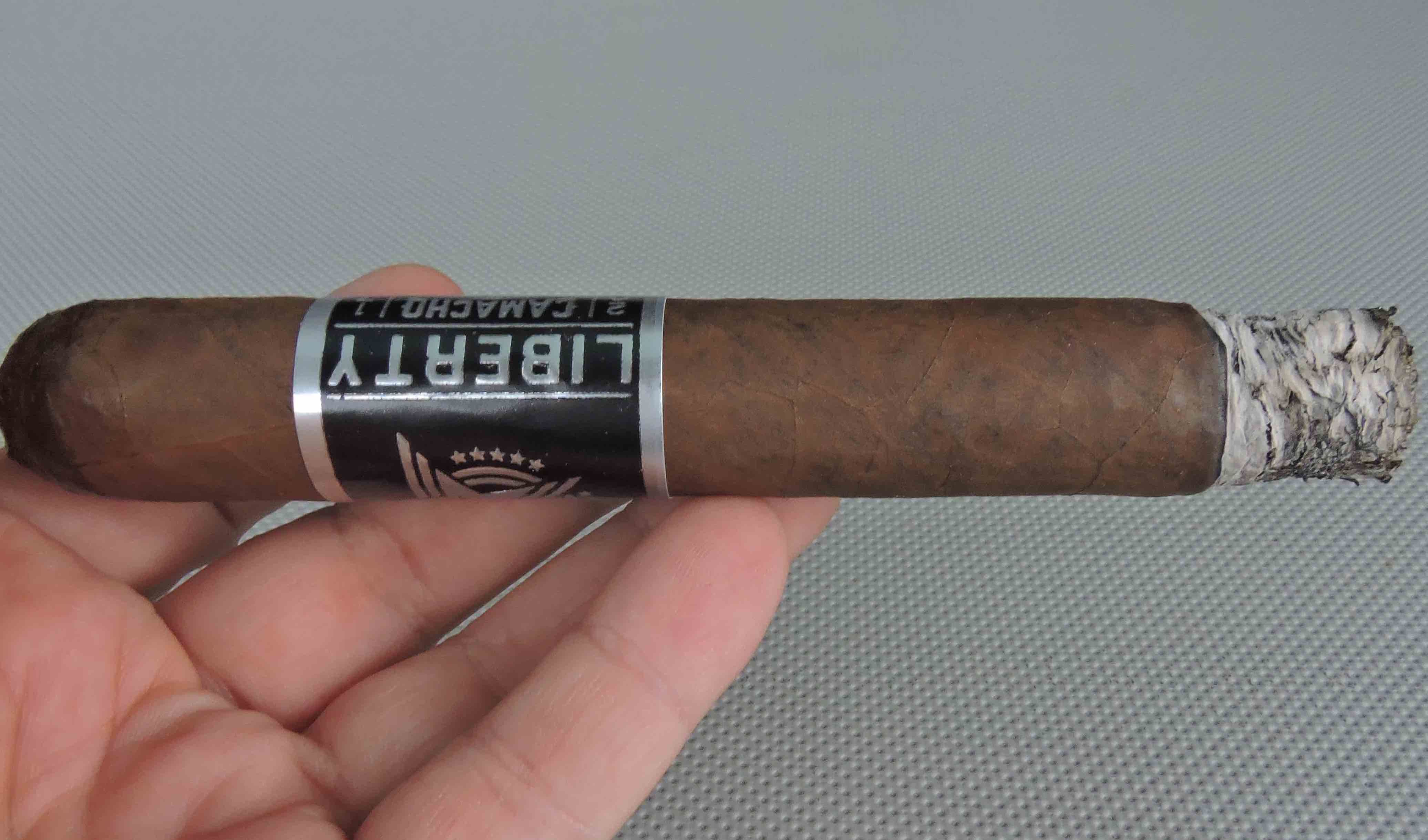 Burn of the Camacho Liberty 2017

The draw also performed very well to the Camacho Liberty 2017. It had a touch of resistance to it – which is something that I like. At the same time, I found this cigar to be a low maintenance cigar to derive flavor from.

When looking at strength versus body, this was a cigar where I found the body had the edge throughout the smoking experience.

I was a bit perplexed on why the Camacho Liberty 2017 had a different size than the traditional 11/18 format that has been associated with this release for many years. The only thing I could infer is that the blend selected for the Liberty 2017 worked better in 6 x 54 Super Toro format than the 11/18 figurado. In a way, I had higher expectations with this blend. While the blend delivered a solid and enjoyable cigar, it is one that fell short in terms of a “wow factor”. Still, this is a cigar I would smoke again. This is a cigar I’d recommend to a more seasoned cigar enthusiast. However, it’s a more expensive cigar – priced around $20.00. In this case, I’d probably recommend trying one of these first to see if this cigar that meets your profile.