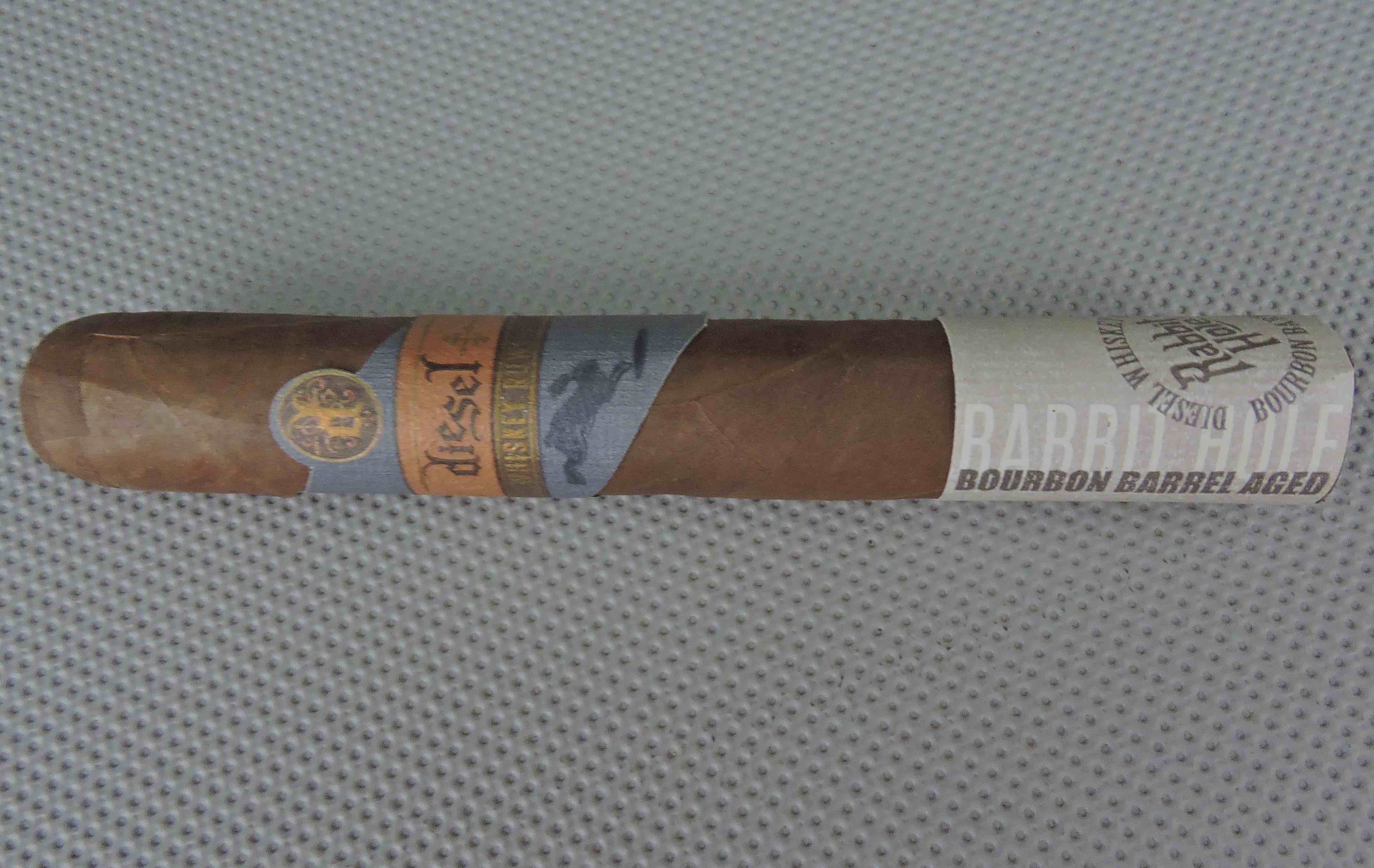 Rabbit Hole Distillery is a small company based out of Louisville, Kentucky that produces bourbon, rye, and gin products. The Diesel Whiskey Row features Mexican San Andres binder leaves that are aged in barrels originally used for Rabbit Hole Bourbon, utilizing a proprietary process that has been developed by Fernandez. The bourbon barrels originally arrived at Fernandez’s factory back in 2016. After placing the San Andres tobacco in the barrels using a special configuration, the tobacco was left to age inside the barrels. The air inside was controlled at regular intervals to ensure the flavors were imported evenly. The tobacco was then incorporated into a blend worked on by Fernandez.

Without further ado, let’s break down the Diesel Whiskey Row Robusto and see what this cigar brings to the table.

The San Andres binder is definitely the distinguishing factor of the blend of the Diesel Whiskey Row. It covers a blend of Nicaraguan tobaccos and the cigar itself is finished with an Ecuadorian Habano wrapper.

Diesel Whiskey Row is available in four sizes each presented in 25-count boxes. 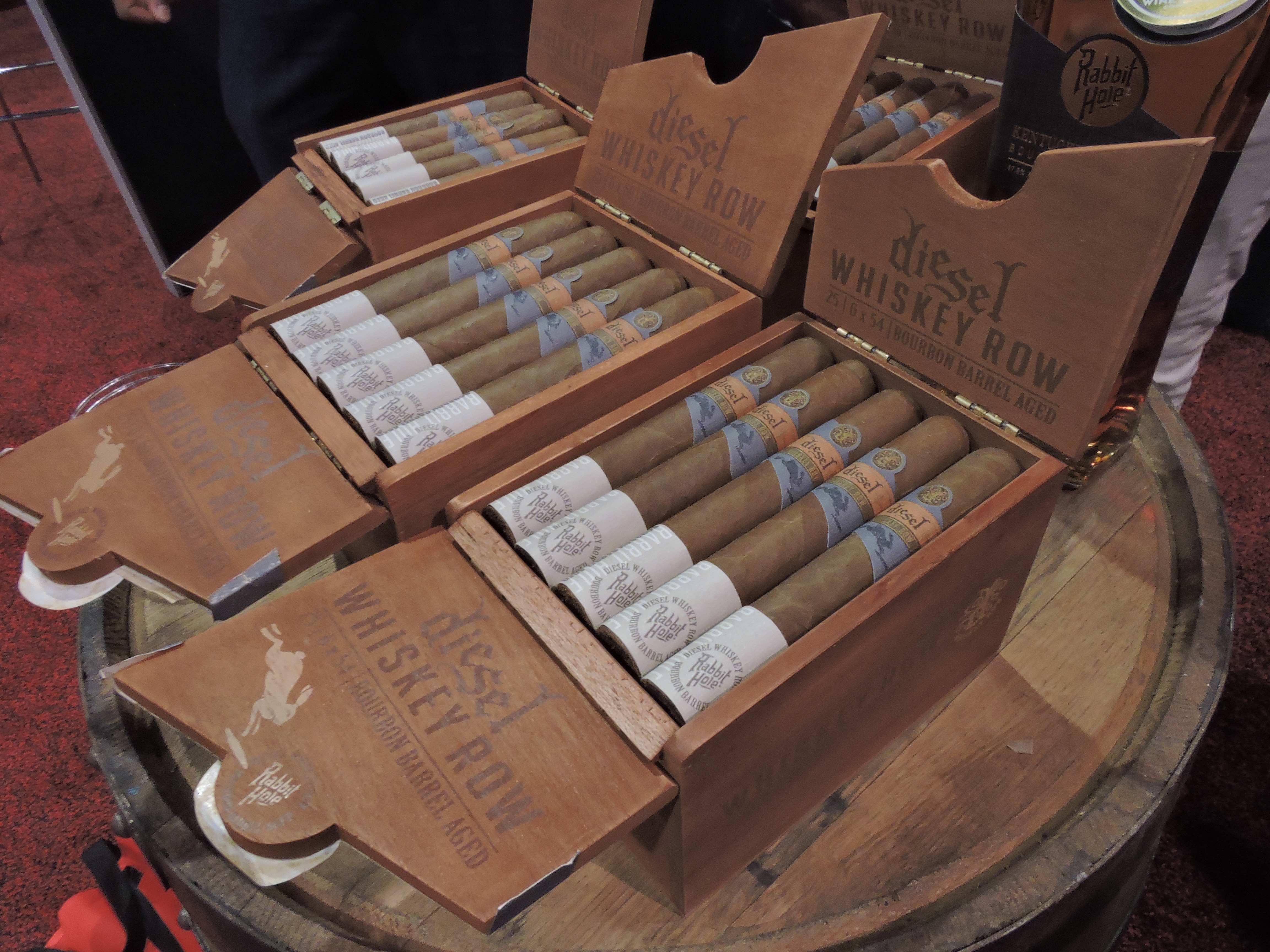 The Ecuadorian Habano wrapper of the Diesel Whiskey Row Robusto had a medium brown color with a slight rosado tint. The surface of the wrapper had an oily complexion. This was a wrapper on the smooth side. The veins and wrapper seams that were visible were on the thin side.

There are two bands on the Diesel Whiskey Row. While we don’t score the band design, the primary band was a personal favorite of the band designs released in 2018. The band has an irregular shape with a gray, rust, brown, and gold color scheme. The top and bottom of the band has a thick gray trim. The upper part of the band features a small brown circular field with gold trim. On the center of the band is a classic styled “D” in gold font. A rust-colored stripe sits second from the top with the “diesel” logo text in brown font. Third from the top is a brown stripe with gold trim. On that stripe is the text “WHISKEY ROW” in gold font. Finally on the lower gray stripe is a silhouette of a rabbit.

The footer band is a large band with an off-white color with mostly brown font. On that band is the “Rabbit Hole” logo text surrounded by the text “DIESEL WHISKEY ROW BARREL AGED” arranged in a circular font. To the left of the band is the text “RABBIT HOLE” in a large white font with the text “BOURBON BARREL AGED” in a dark font arranged in landscape mode.

After removing the footer band from the wrapper of the Diesel Whiskey Row Robusto, a straight cut was used to remove the cap. From that point, it was time for the pre-light draw. The cold draw yielded some notes of earth and cream with a subtle natural tobacco sweetness. I deemed the pre-light draw of the Diesel Whiskey Row Robusto to be excellent. At this point, it was time to light up the cigar and see what the smoking phase would have in store.

The Diesel Whiskey Robusto kicked off with notes of oak, cream, white pepper, and sweet natural tobacco. The cream and oak notes moved into the forefront early on with the sweet natural tobacco and pepper settling in the background. As the cigar moved through the first third, some notes of baker’s spice also surfaced in the background. Meanwhile, on the retro-hale, there was a mix of wood and cedar notes.

During the second third, the oak notes remained in the forefront. The cream notes receded into the background. At the same time, there was also a decrease in the natural tobacco sweetness in the background. It was also during this stage that the white pepper notes morphed into more of a classic black pepper note.

The last third of the Diesel Whiskey Row Robusto saw the oak notes remain grounded in the forefront. The pepper notes were now more prominent, but still could be considered secondary in the overall scheme of things. While there was still some natural tobacco sweetness, the cream and baker’s spice had dissipated. This is the way the Diesel Whiskey Row came to a conclusion. The cigar finished up with a cool nub that was firm to the touch.

During the smoking experience of the Diesel Whiskey Row Robusto there was a slight amount of meandering that occurred on the burn path. This did require a few additional touch-ups, but it was nothing that became overly problemsome. This was a cigar that produced a tight ash that was white-gray in color. As for the burn rate and burn temperature, both were ideal. 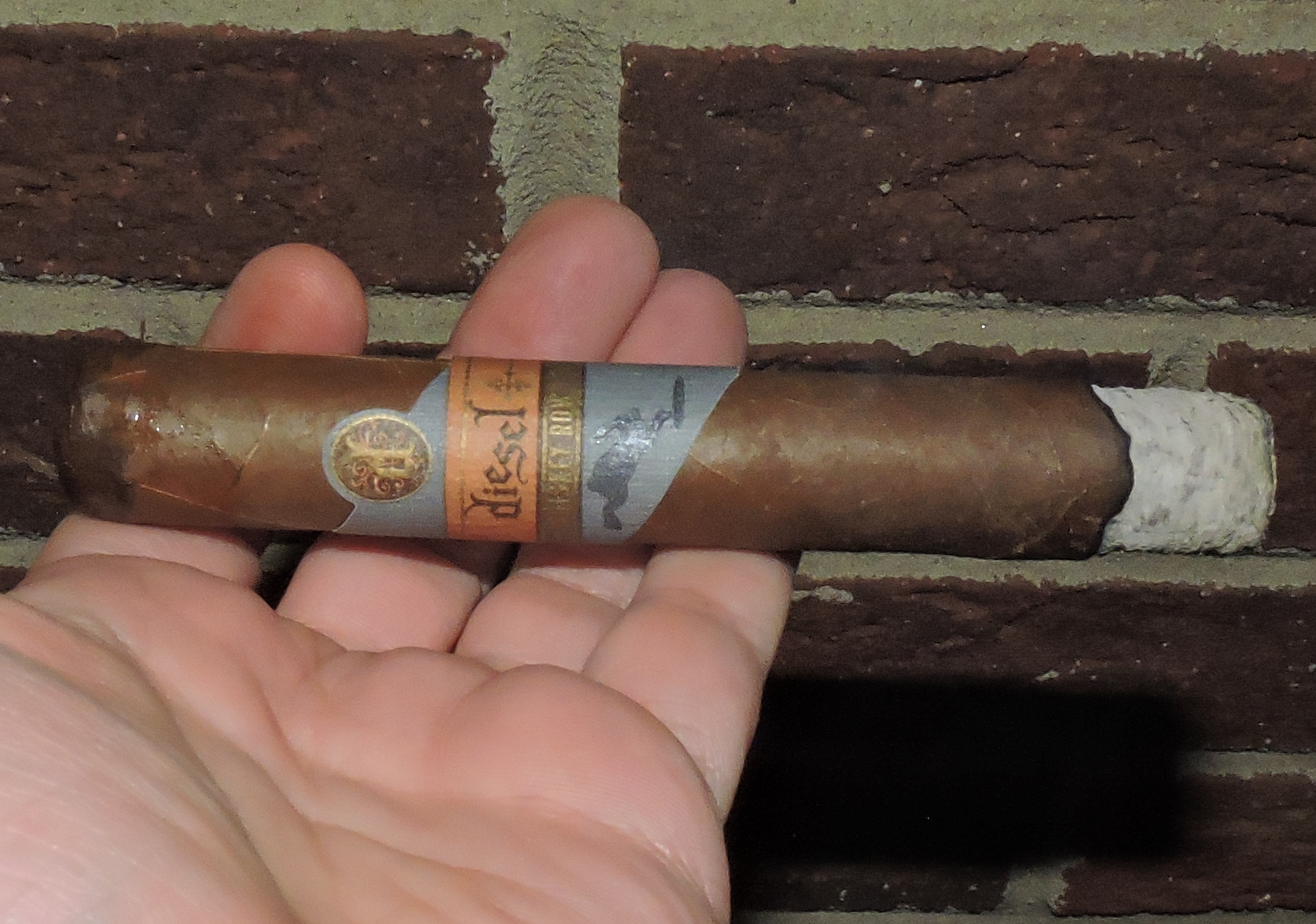 Overall the draw performed extremely well. It had a sweet spot of both openness and resistance throughout the smoking experience. In the end, this made for a low maintenance cigar to derive flavor from.

While AJ Fernandez has a reputation for bolder cigars, the Whiskey Row Robusto was not one of the bolder offerings. This is not a negative and in the end, I found it worked quite well for this blend. This cigar started out mild to medium in strength before progressing to medium strength in the second half. As for the flavors, they remained medium-bodied through the smoking experience with little variation in intensity.

In terms of strength versus body, I found the body maintained an edge throughout the smoking experience.

One thing I like is the direction General Cigar took with Diesel Whiskey Row. I think this cigar went a long way to help shed Diesel’s reputation for being a catalog brand. On top of that, they delivered a very good cigar at a very fair price. This isn’t a cigar where the bourbon barrel aging created an infusion in the blend. Instead, it created a nice contribution to the flavor profile – in the form of the oak and sweet natural tobacco notes. As mentioned, while this isn’t a bolder cigar, it works quite well with what was delivered here. This is a cigar I could recommend to novice and experienced cigar enthusiasts. As for myself, this is a cigar I would smoke again – and buy multiples to keep in the humidor.