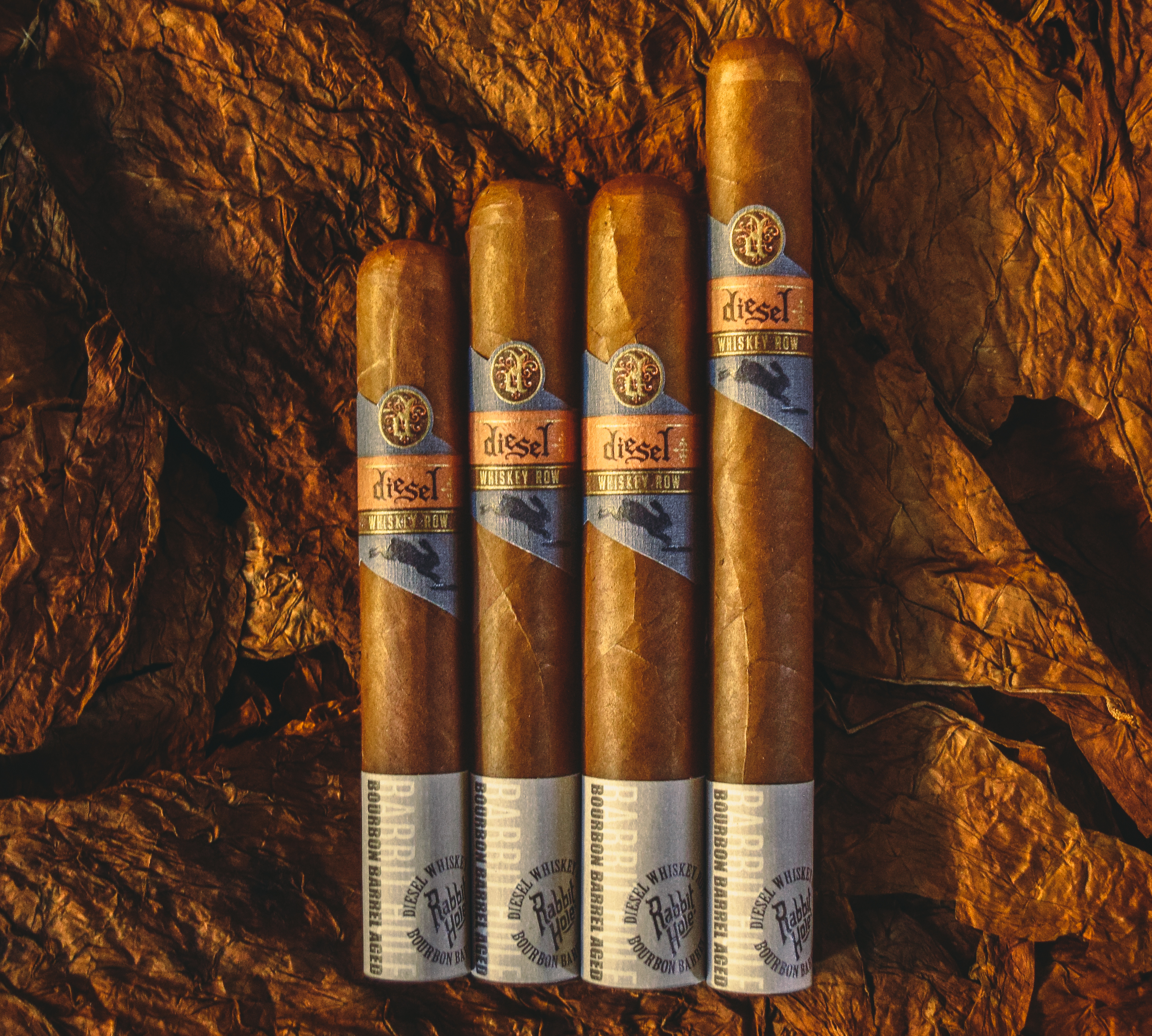 Today General Cigar Company has announced a new cigar line known as Diesel Whiskey Row. It’s not only the latest General Cigar to be blended by AJ Fernandez, it’s a project being done in partnership with Rabbit Hole Distilling out of Louisville Kentucky. This is a newer distillery based out of Louisville, Kentucky that produces bourbon, rye, and gin products.

In a press release announcing the project, Senior Brand Manager Justin Andrews commented how the project was a good fit for the brands:  “The partnership between Diesel and Rabbit Hole speaks of going against the grain in traditional industries. Rabbit Hole doesn’t claim to use 12-year-old juice or have a 6th generation master distiller, much like Diesel doesn’t claim to be an old Cuban brand or have tobaccos that have been aged for 20 years. Both Rabbit Hole and Diesel are young, energetic brands with a unique go-to-market strategy. We knew the first time both companies sat down, there was a tremendous amount of synergy.”

The Diesel Whiskey Row features Mexican San Andres binder leaves that are aged in barrels originally used for Rabbit Hole Bourbon, utilizing a proprietary process that has been developed by Fernandez. The bourbon barrels originally arrived at Fernandez’s factory back in 2016. After placing the San Andres tobacco in the barrels using a special configuration, the tobacco was left to age inside the barrels. The air inside was controlled at regular intervals to ensure the flavors were imported evenly.

In addition to the specially aged San Andres binder, the cigar also incorporates a three-region blend of Nicaraguan tobaccos from Ometepe, Condega, and Jalapa aged five to eight years. The cigar is finished with an Ecuadorian Habano wrapper. The cigars will be available in four sizes, each presented in 25-count boxes. Pricing ranges from $7.49 to $8.99.

Kaveh Zamanian, founder and whiskey maker of Rabbit Hole Bourbon commented, “Together, cigars and great whiskey have created uncountable moments of quiet joy. Aging fine tobacco in bourbon barrels which were used to age Rabbit Hole Bourbon modernizes that great tradition. We’re excited that our partnership with Diesel gives us a hand in adding depth to what is already a profoundly enjoyable experience.”

“A lot of passion went into this process and I am very pleased with the results. Aging the binder leaf in the bourbon barrels added an unexpected layer of flavor and aroma right beneath the wrapper. When you smoke Whiskey Row, you get a unique and complex experience that engages the senses unlike any other cigar I’ve smoked,” commented AJ Fernandez.

General Cigar has also announced there will be a series of events featuring pairings with Rabbit Hole Bourbon beginning in July.

The Diesel brand originally was known as a catalog brand, but at last year’s IPCPR Trade Show, General Cigar started to re-position the brand for brick and mortar with the re-introduction of the Diesel Grind.

At a glance, here is a look at the Diesel Whiskey Row: