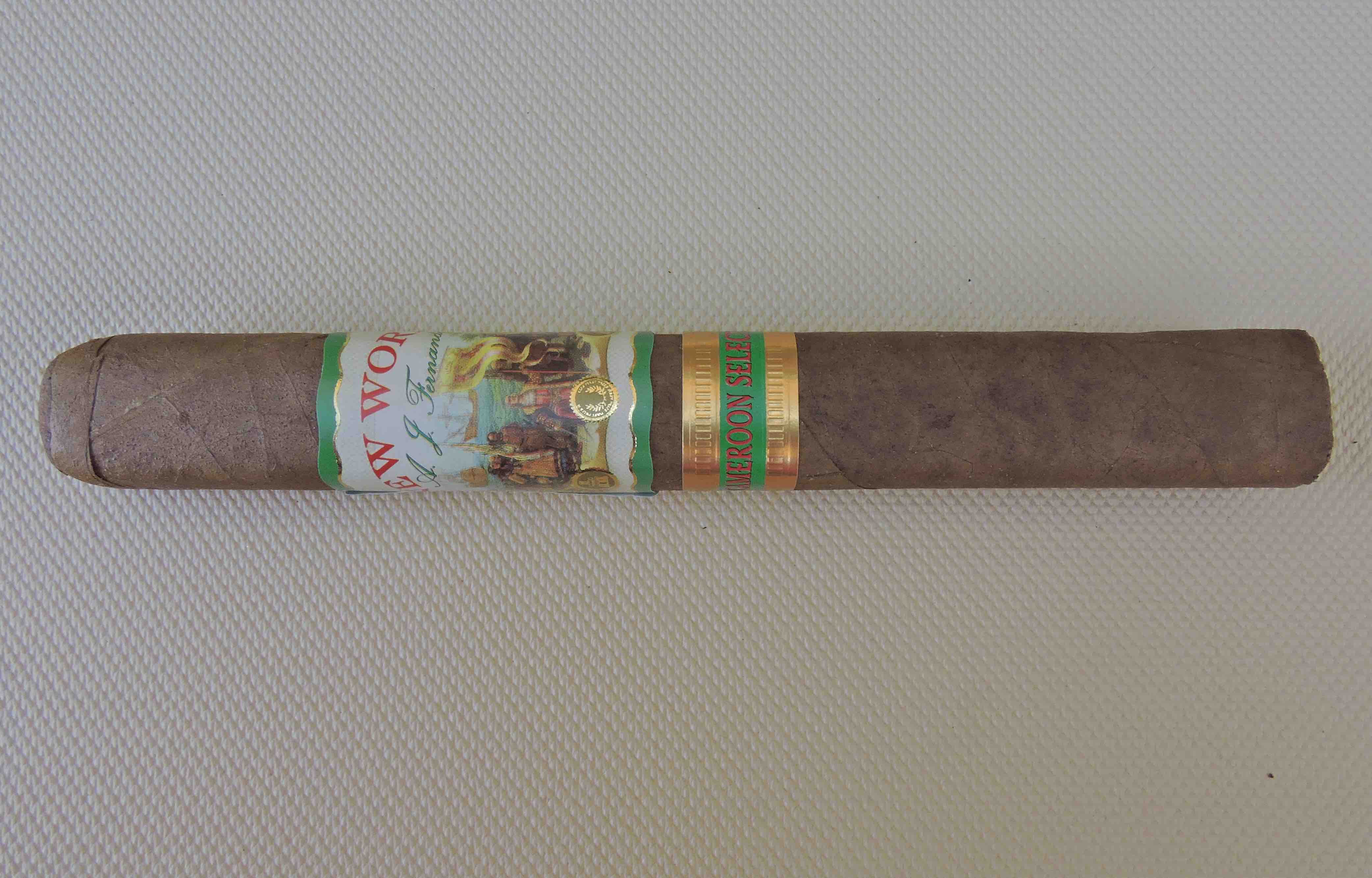 When the New World was announced, AJ Fernandez Cigars explained the significance of the name New World and how it ties in with cigars:

Without further ado, let’s break down the New World Cameroon Selection Toro and see what this cigar brings to the table:

In addition to the Cameroon wrapper, the remainder of the blend features all-Nicaraguan tobaccos that include tobaccos sourced from AJ Fernandez’s Nicaraguan farms.

The Cameroon wrapper of the AJ Fernandez New World Cameroon Selection Toro had a medium brown color, but also was a darker shade compared to many Cameroon wrappers. On the surface, there was a slight amount of mottling as well as a thin sheen of oil. This was a relatively smooth Cameroon wrapper. There were very few visible veins and the darker shade did a good job at hiding the wrapper seams. As for the box press, it had a near square shape.

The band to the AJ Fernandez New World Cameroon Selection has a parchment-colored background with green trim across the top and bottom. There is a portrait style print representing some Columbus-era New World explorers. Above the portrait is the text “NEW WORLD” in red font arranged in a slight arc. Below that text is the text “by A.J. Fernandez” in thin green cursive font. To the left of the portrait is the text “PREMIUM AGED CIGAR ” in green font and “CAMEROON SELECTION” in red font – arranged in landscape mode. There are gold medallions across the lower part of the portrait anfd some green and gold adornments on the far left and right. 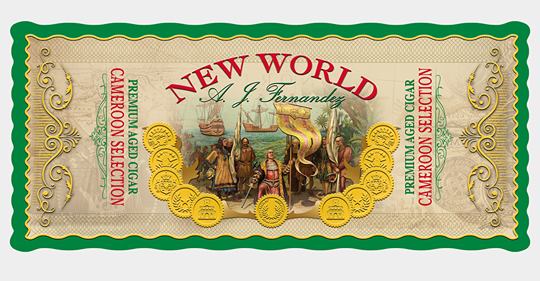 There is a secondary band just below the primary band. It is green with thick gold trim. On the green section is the text “CAMEROON SELECTION” in red font.

The cigar experience of the AJ Fernandez New World Cameroon Selection Toro commenced with a straight cut. Once the cap was removed, it was on to the pre-light draw. The dry draw delivered a mix of wood and natural tobacco sweetness. While it was a simple flavor profile, I found the flavors of the dry draw to be satisfactory. At this point, it was time to light up the New World Cameroon Selection and move on to the smoking phase.

During the first third, the caramel component was prominent on the flavor profile. By the second third, the richness of the natural tobacco emerged. The caramel component now became more of a secondary note. As the New World Cameroon Selection Toro reached the midway point, there was a slight increase in pepper.

The last third of the New World Cameroon Selection Toro saw the natural tobacco remain the primary note. There was now more in the way of pepper notes. Meanwhile, there still were notes of wood and caramel in the more distant background. This is the way the AJ Fernandez New World Cameroon Selection Toro came to a close. The resulting nub was soft to the touch and cool in temperature.

From a construction standpoint, the New World Cameroon Selection Toro was flawless – and this was reflected on the burn and draw. The burn maintained a straight burn path and relatively straight burn line from start to finish. The resulting ash was tight with a near white color to it. Both the burn rate and burn temperature maintained ideal levels from start to finish. 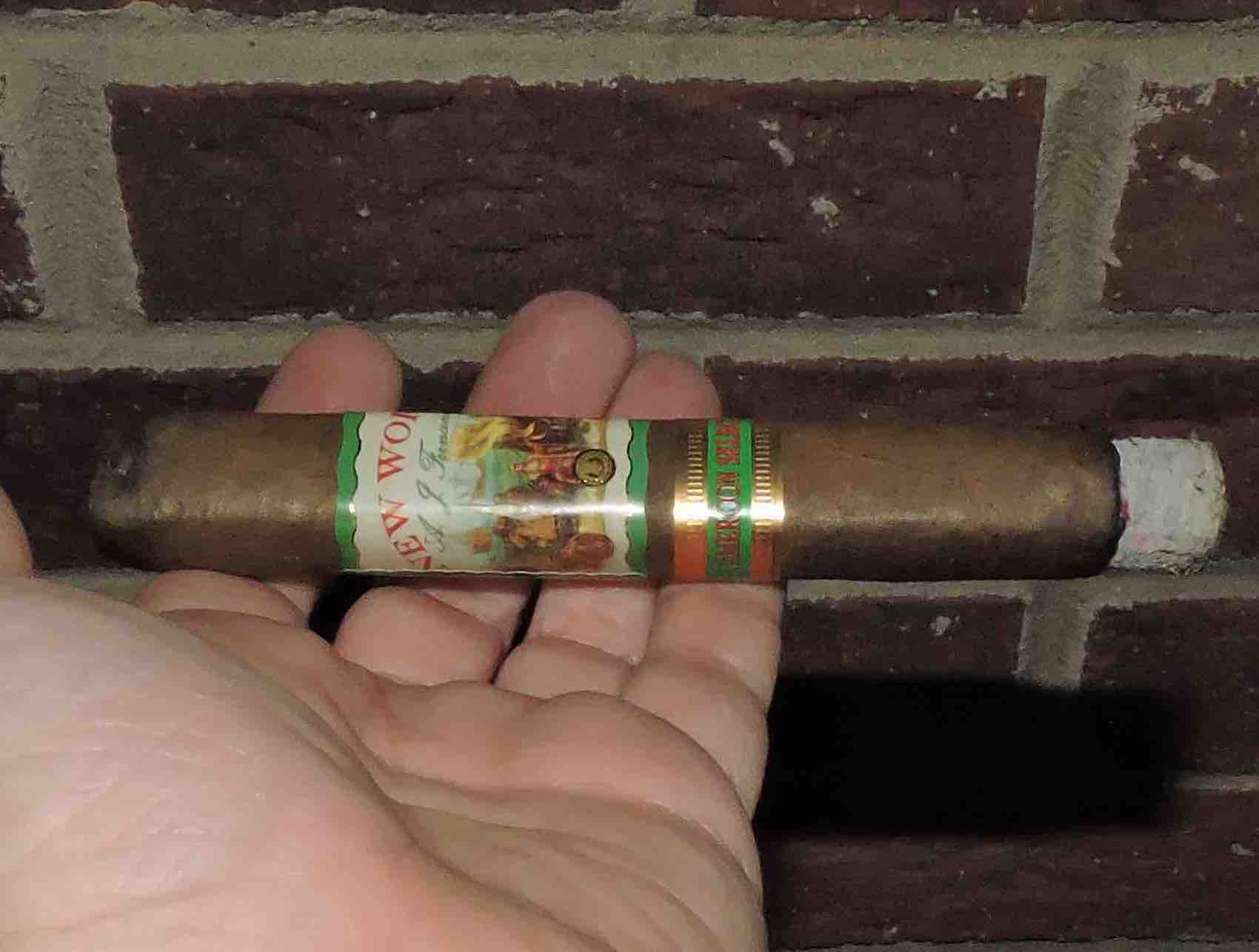 The New World Cameroon Toro’s excellent construction was also reflected on how the draw performed. This was a cigar that struck a nice equilibrium between openness and resistance. As a result, this was a low maintenance cigar to puff on and derive flavor from.

As for the strength versus body, the body maintained the edge from start to finish

One thing I will say right out of the gate. If you are looking for an aber-complex cigar with lots of flavor nuances and transitions, the AJ Fernandez New World Cameroon is not going to be the cigar for you. But if you are looking for a well-constructed cigar that scores nicely in the flavor department then this is the cigar for you.  This blend also seemed to sync up nicely with the Toro sized vitola. Finally, one cannot ignore this cigar’s $6.00 price point makes it a great value. This is a cigar that can be smoked by a novice or experienced cigar enthusiast any time of the day. As for myself, this is a cigar I would smoke again – and take advantage of the price point and buy multiples for my humidor.